"Welcome to Florida. But don't register to vote and vote the stupid way you did up north," warned Grady Judd 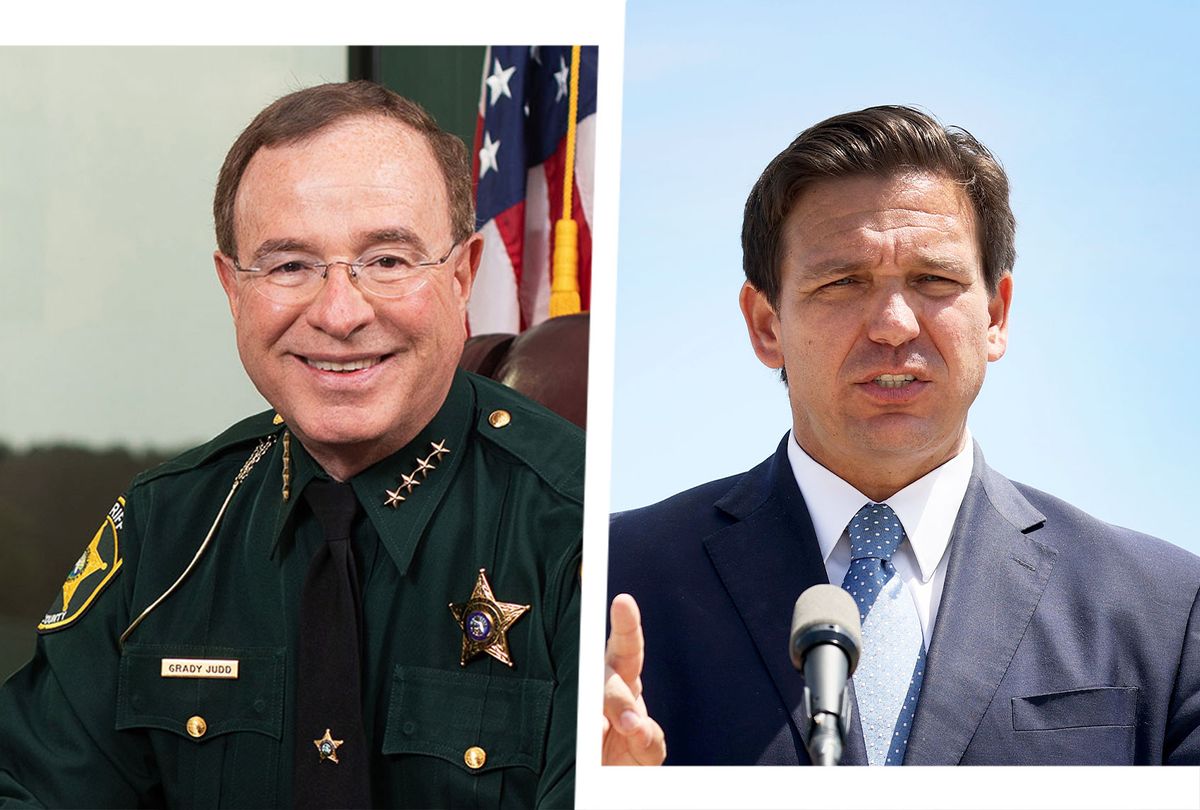 During a Monday signing ceremony for Florida's new anti-riot bill (HB 1) backed by law enforcement all throughout the state, Polk County Sheriff Grady Judd appeared alongside Republican Gov. Ron DeSantis to remind Floridians of how the new legislation –– which grants civil immunity to motorists who crash into protesters –– will preserve the state they "know and love."

"There's a reason that this place is fun," the sheriff explained, holding up what appeared to be stock photos of multiracial families basking in the sunlight of Florida's beaches. "There's a reason why we have a 49-year-low crime rate. And the same people that don't think we should have an anti-rioting bill, or a rioting bill, are the same ones that think we ought to let more people out of prison."

He continued, "We're a special place, and there are millions and millions of people who like to come here. And quite frankly, we like to have them here. We only want to share one thing as you move in hundreds a day. Welcome to Florida, but don't register to vote and vote the stupid way you did up north, or you'll get what they got."

Grady also made sure to delineate peaceful protests from riots, alleging that law enforcement, in fact, "want[s] people to peacefully protest when they feel the need." He continued, "It's the foundation of our country." He failed to mention, however, that the distinction between peaceful protesting and rioting is often made blurry by the police's routine initiation and escalation of violence in what start as otherwise peaceful demonstrations.

DeSantis, notably amused by Grady's jab at "northern" voters, has touted the bill as "the strongest anti-rioting, pro-law enforcement piece of legislation in the country." He said, "There is nothing close."

The bill makes it a felony to cause more than $200 in damage of public property, and makes "aggravated rioting" punishable by up to 15 years in prison. It also grants immunity to motorists who hit protesters blocking roadways and bars people charged with rioting from posting bail before their first court appearance.

Additionally, the measure will pose added challenges to defunding the police and penalizes anyone who tells an officer to stand down during a riot, according to Fox News.

"This bill prevents local government from being able to defund law enforcement," DeSantis boasted. "If you tell law enforcement to stand down, then you're responsible for the damage that ensues, and if someone has been harmed or their property has been destroyed, then they can sue you (the municipality) for compensation," said DeSantis.