A Black teenager, Ma'Khia Bryant, was killed by police in Ohio just minutes before the Derek Chauvin verdict 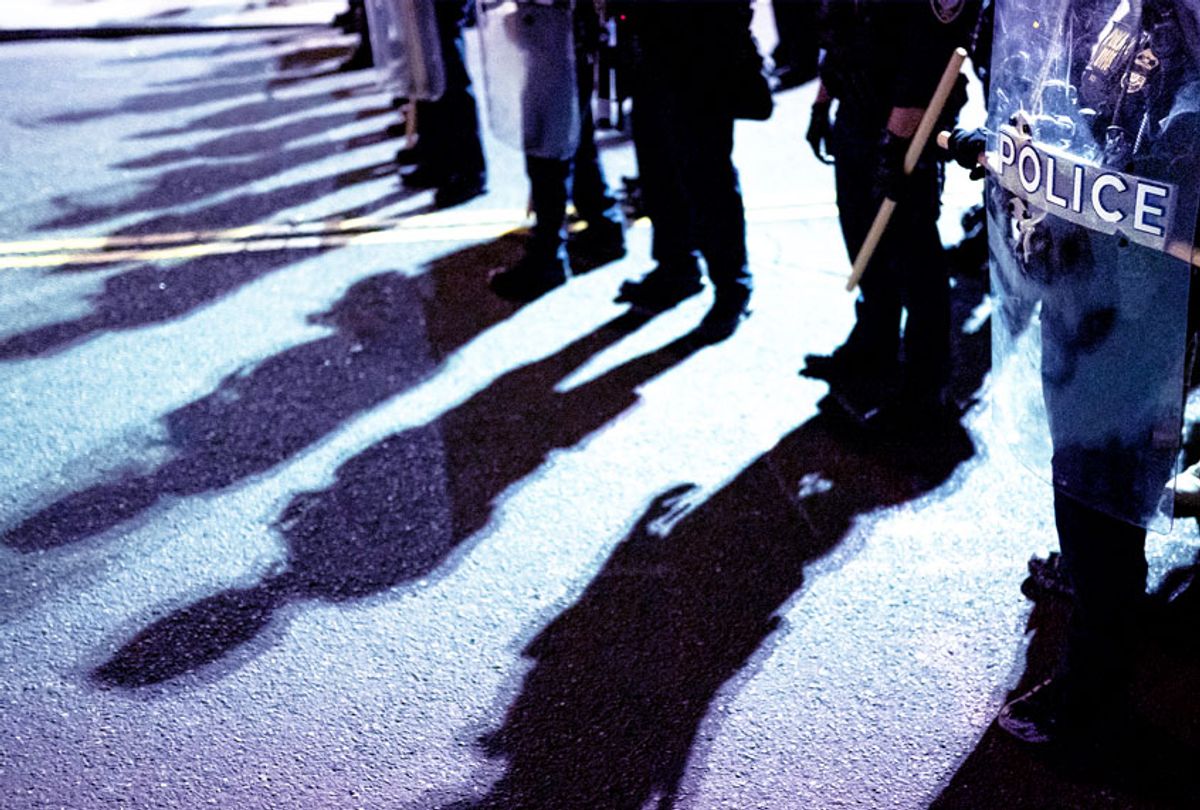 Federal officers line up prior to a crowd dispersal of about 300 protesters in front of the Immigration and Customs Enforcement (ICE) detention building on August 26, 2020 in Portland, Oregon. Protests continued for the 91st night in Portland as activist called for solidarity with rallies in Kenosha, Wisconsin. (Nathan Howard/Getty Images)
--

A police officer told a crowd gathered at the scene where a Black teenager, Ma'Khia Bryant, was killed by police in Columbus, Ohio just minutes before the verdict in the Derek Chauvin murder trial was announced on Tuesday that "blue lives matter."

Ma'Khia Bryant was reportedly involved in an altercation with another kid in her foster care home when she quickly rushed to call the police for help saying a woman had a knife, according to her aunt. The teen then reporetedly hung up and rushed back outside.

In a Facebook video taken in the aftermath of the shooting, upset residents can be seen talking about what happened when a nearby officer appears to yell to them: "Blue lives matter!"

One of the residents can then be seen angrily reacting. "Blue lives matter? Crazy. That's an insult, especially at this place right now."

Ben Crump, the lawyer representing the family of George Floyd, the Black man who was murdered by Chauvin, who at the time was a Minneapolis police officer, tweeted that "as we breathed a collective sigh of relief today, a community in Columbus felt the sting of another police shooting."

"Another child lost! Another hashtag," he added.

Bryant was transported to Mount Carmel East, but died as a result of her injuries.

"She was a good kid. She was loving," Hazel Bryant, aunt to Ma'Khia Bryant, told reporters. "She didn't deserve to die like a dog in the street."

Columbus Public Safety Director Ned Pettus Jr. urged the public to be patient as the investigation continues, and city officials again called for peace. The Columbus Police Department released body cam footage from the officer, who is on paid leave pending an investigation, the same day as the shooting — a reform that came as a result of last summer's protests.

The shooting in Columbus comes after Miles Jackson, a 27-year-old Black man, was killed in an exchange of gunfire with officers at Mount Carmel St. Ann's medical center in Westerville, Ohio, earlier this month. The Columbus Police Department is also under heavy scrutiny over its handling of a riot near Ohio State on Saturday where nearly 1,000 mostly white students destroyed several cars and set fires as police watched from afar.

About 100 people gathered in downtown Columbus late Tuesday to protest the shooting. They chanted, "Say her name! Ma'Khia Bryant!" and "Black Lives Matter!"