Biden promised a return to diplomacy — instead, he's appeasing the hawks and neocons

Biden took office vowing a new era in foreign policy, but so far it's the same old dangerous American hubris 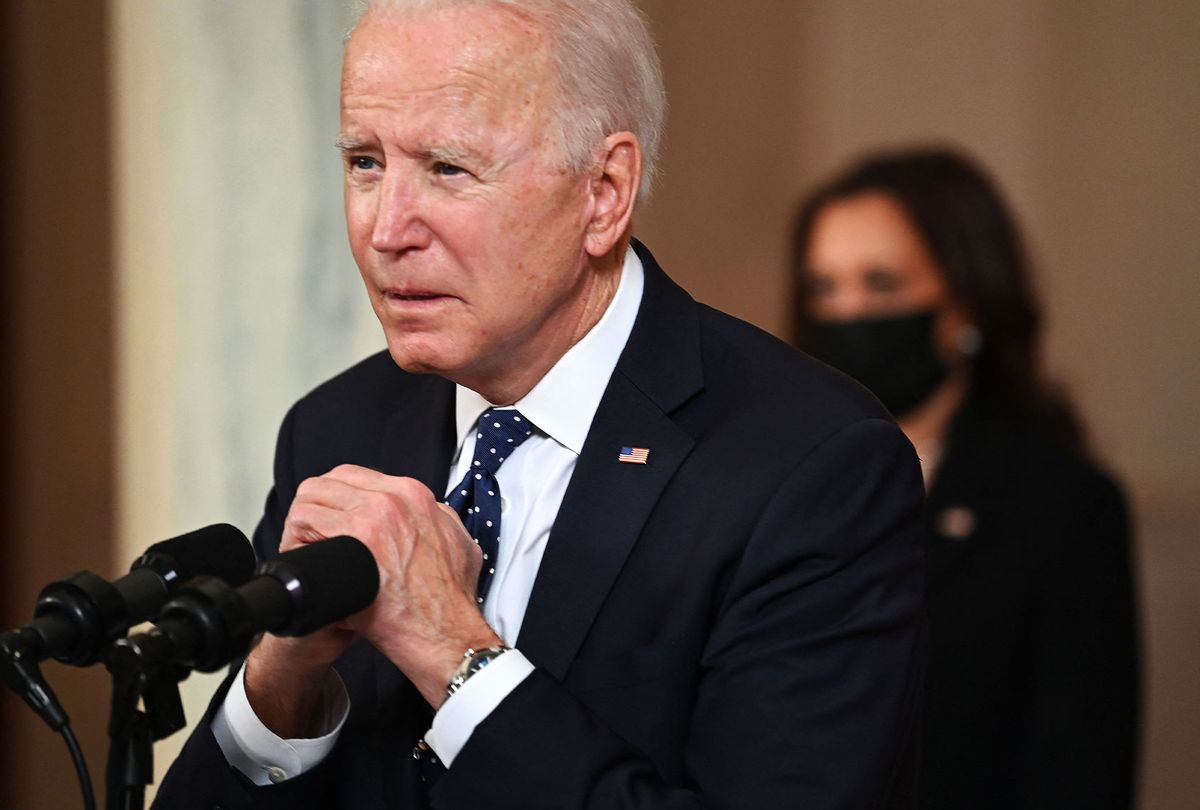 US President Joe Biden gestures as he delivers remarks on the guilty verdict against former policeman Derek Chauvin at the White House in Washington, DC, on April 20, 2021. - Derek Chauvin, a white former Minneapolis police officer, was convicted on April 20 of murdering African-American George Floyd after a racially charged trial that was seen as a pivotal test of police accountability in the United States. (BRENDAN SMIALOWSKI/AFP via Getty Images)
--

President Biden took office promising a new era of American international leadership and diplomacy. But with a few exceptions, he has so far allowed self-serving foreign allies, hawkish U.S. interest groups and his own imperial delusions to undermine diplomacy and stoke the fires of war.

Biden's failure to quickly recommit to the Iran nuclear deal, or JCPOA — as Sen. Bernie Sanders promised to do on his first day, if elected — provided a critical delay that has been used by opponents to undermine the difficult shuttle diplomacy taking place in Vienna to restore the agreement.

The attempts to derail talks range from the introduction of the Maximum Pressure Act on April 21 to codify the Trump administration's sanctions against Iran to Israel's cyberattack on Iran's Natanz nuclear facility. Biden's procrastination has only strengthened the influence of the hawkish Washington foreign policy "blob," Republicans and Democratic hawks in Congress and foreign allies like Israeli Prime Minister Benjamin Netanyahu.

In Afghanistan, Biden has won praise for his decision to withdraw U.S. troops by Sept. 11, but his refusal to abide by the May 1 deadline for withdrawal as negotiated under the Trump administration has led the Taliban to back out of the planned UN-led peace conference in Istanbul. A member of the Taliban military commission told the Daily Beast that "the U.S. has shattered the Taliban's trust."

Now active and retired Pentagon officials are regaling the New York Times with accounts of how they plan to prolong the U.S. war without "boots on the ground" after September, undoubtedly further infuriating the Taliban and making a ceasefire and peace talks all the more difficult.

In Ukraine, the government has launched a new offensive in its civil war against the ethnic Russian provinces in the eastern Donbass region, which declared unilateral independence after the U.S.-backed coup in 2014. On April 1, Ukraine's military chief of staff said publicly that "the participation of NATO allies is envisaged" in the government offensive, prompting warnings from Moscow that Russia could intervene to protect Russians in Donbass.

Sticking to their usual tired script, U.S. and NATO officials are pretending that Russia is the aggressor for conducting military exercises and troop movements — within its own borders — in response to Kyiv's escalation. Even the BBC is challenging this false narrative, explaining that Russia is acting to deter an escalation of the Ukrainian offensive and U.S. and NATO threats. The U.S has turned around two guided-missile destroyers that were steaming toward the Black Sea, where they could well have been sitting ducks for Russia's advanced missile defenses.

Tensions have also escalated with China, as the U.S. Navy and Marines stalk Chinese ships in the South China Sea, well inside the island chains China uses for self defense. The Pentagon is hoping to drag NATO allies into participating in these operations, and the U.S. Air Force plans to shift more bombers to new bases in Asia and the Pacific, supported by existing larger bases in Guam, Japan, Australia and South Korea.

Meanwhile, despite a promising initial pause and policy review, Biden has decided to keep selling tens of billions of dollars worth of weapons to authoritarian regimes in Saudi Arabia, the United Arab Emirates and other Persian Gulf sheikdoms, even as they continue to bomb and blockade famine-stricken Yemen. Biden's unconditional support for the most brutal authoritarian dictators on the planet lays bare the bankruptcy of Democrats' attempts to frame America's regurgitated Cold War on Russia and China as a struggle between "democracy" and "authoritarianism."

In all these international crises (along with Cuba, Haiti, Iraq, North Korea, Palestine, Syria and Venezuela, which are bedeviled by the same U.S. unilateralism), Biden and the hawks egging him on are pursuing unilateral policies that ignore solemn commitments in international agreements and treaties, riding roughshod over the good faith of America's allies and negotiating partners.

As the Russian foreign ministry bluntly put it when it announced its countermeasures to the latest round of U.S. sanctions, "Washington is unwilling to accept that there is no room for unilateral dictates in the new geopolitical reality."

Chinese President Xi Jinping echoed the same multipolar perspective on April 20 at the annual Boao Asian international business forum. "The destiny and future of the world should be decided by all nations, and rules set up just by one or several countries should not be imposed on others," Xi said. "The whole world should not be led by unilateralism of individual countries."

The near-universal failure of Biden's diplomacy in his first months in office reflects how badly he and those who have his ear are failing to understand the limits of American power, and to predict the consequences of his unilateral decisions.

Unilateral, irresponsible decision-making has been endemic in U.S. foreign policy for decades, but America's economic and military dominance created an international environment that was extraordinarily forgiving of American "mistakes," even as they ruined the lives of millions of people in the countries directly affected. Now the U.S. no longer dominates the world, and it is critical for U.S. officials to more accurately assess the relative power and positions of the United States and the countries and people it is confronting or negotiating with.

Under Trump, Defense Secretary Jim Mattis launched negotiations to persuade Vietnam to host U.S. missiles aimed at China. Those negotiations went on for three years, but they were based entirely on wishful thinking and misreadings of Vietnam's responses by U.S. officials and Rand Corp contractors. Experts agree that Vietnam would never violate a formal, declared policy of neutrality it has held and repeatedly reiterated since 1998.

As Gareth Porter summarized this silly saga, "The story of the Pentagon's pursuit of Vietnam as a potential military partner against China reveals an extraordinary degree of self-deception surrounding the entire endeavor. And it adds further detail to the already well-established picture of a muddled and desperate bureaucracy seizing on any vehicle possible to enable it to claim that U.S. power in the Pacific can still prevail in a war with China."

Unlike Trump, Biden has been at the heart of American politics and foreign policy since the 1970s. So the degree to which he too is out of touch with today's international reality is a measure of how much and how quickly that reality has changed and continues to change. But the habits of empire die hard. The tragic irony of Biden's ascent to power in 2020 is that his lifetime of service to a triumphalist American empire has left him ill-equipped to craft a more constructive and cooperative brand of American diplomacy for today's multipolar world.

Amid the U.S. triumphalism that followed the end of the Cold War, the neocons developed a simplistic ideology to persuade America's political leaders that they need no longer be constrained in their use of military power by domestic opposition, peer competitors or international law. They claimed that America had virtually unlimited military freedom of action and a responsibility to use it aggressively, because, as Biden parroted them recently, "the world doesn't organize itself."

The international violence and chaos Biden has inherited in 2021 is a measure of the failure of the neocons' grand ambitions. But there is one place that they conquered, occupied and still rule to this day: Washington, D.C.

The dangerous disconnect at the heart of Biden's foreign policy is the result of this dichotomy between the neocons' conquest of Washington and their abject failure to conquer the rest of the world.

For most of Biden's career, the politically safe path on foreign policy for corporate Democrats has been to talk a good game about human rights and diplomacy, but not deviate too far from hawkish, neoconservative policies on war, military spending and support for often repressive and corrupt allies throughout America's neocolonial empire.

The tragedy of such compromises by Democratic Party leaders is that they perpetuate the suffering of millions of people affected by the real-world problems they fail to fix. But the Democrats' subservience to simplistic neoconservative ideas also fails to satisfy the hawks they are trying to appease, who only smell more political blood in the water at every display of moral weakness by the Democrats.

In his first three months in office, Biden's weakness in resisting the bullying of hawks and neocons has led him to betray the most significant diplomatic achievements of each of his predecessors, Obama and Trump, in the JCPOA with Iran and the May 1 withdrawal agreement with the Taliban respectively, while perpetuating the violence and chaos the neocons unleashed on the world.

For a president who promised a new era of American diplomacy, this has been a dreadful start. We can only hope that Biden and his advisers are not too blinded by anachronistic imperial thinking or too intimidated by the neocons to make a fresh start and engage with the world as it actually exists in 2021.