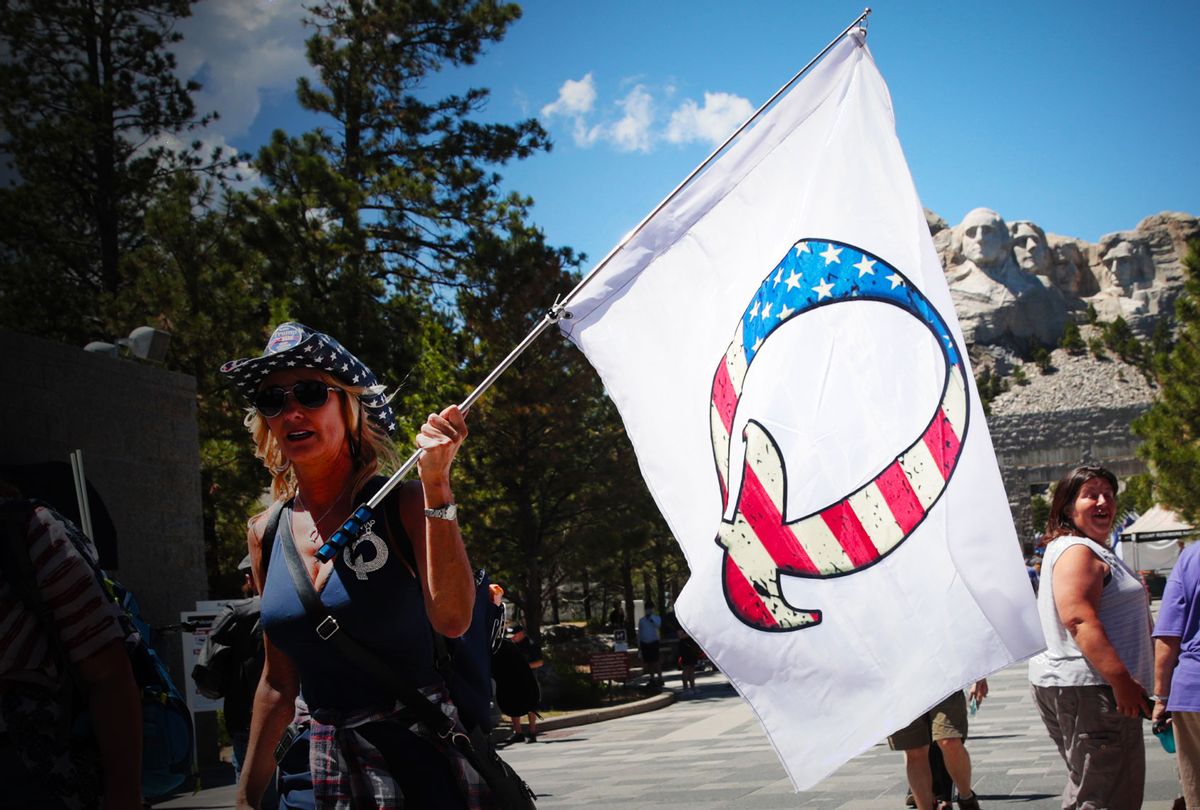 By this point, almost everyone has heard of QAnon, the conspiracy spawned by an anonymous online poster of enigmatic prophecies. Starting with an initial promise in 2017 that Hillary Rodham Clinton would be imminently arrested, a broad group of interpreters divined a conspiracy that saw President Donald Trump's Democratic opponents as a global cabal of Satanic pedophiles.

Perhaps the greatest success of the conspiracy is its ability to create a shared alternate reality, a reality that can dismiss everything from a decisive election to a deadly pandemic. The QAnon universe lives on – now largely through involvement in local, not national, Republican politics.

Moving on from contesting the election, the movement's new focus is vaccines. The influence of QAnon on pandemic denialism is significant, though the spread of Q in local politics is a source of conflict in many states.

The conspiracy may have begun on an obscure web forum, but it is now influencing the Republican Party at all levels.

A recent Daily Kos/Civiqs poll found that 55% of Republicans believe some element of the conspiracy is true.

And in many parts of the country, QAnon supporters are winning elections. From local school boards to city councils, QAnon now has dozens of advocates at nearly every level of local government. While many of these positions hold sway far outside Washington, D.C., the breadth of this movement shows its influence is not likely to wane any time soon.

Not all Republicans are happy with this shift. In South Carolina, Indiana, Michigan and other states, Republican politics are fraught with tensions between QAnon supporters and more traditional conservatives.

For instance, in Indiana, local newspaper The Herald Bulletin published a story on March 21, 2021, headlined "Republican tug-o'-war: Factions vie for influence," reporting that "QAnon believers … showed their support at the Indiana Statehouse in January, holding signs bearing the QAnon phrase "#WWG1WGA" for 'Where we go one, we go all.'" Kyle Hupfer, chair of the Indiana GOP, was quoted as saying, "I don't think QAnon is part of the Republican Party. Leaders need to lead in a fact-based, solution-oriented manner and stick to the actual facts that are proven. Not opinions and not conspiracy theories."

State GOP politicians have promoted QAnon in Arizona through social media posts, although one later apologized for doing so, saying, "Now I think half of them are rather nuts." In January 2021, the Twitter account of the Republican Party of Hawaii tweeted a defense of QAnon believers. The account also defended a Holocaust denier. The official who posted the tweets was later forced to resign.

A similar confrontation has played out in Huntington Beach, California, where the appointed mayor pro tem – or vice mayor – inspired a vote of no confidence for supporting QAnon along with conspiracies against mask-wearing and vaccines.

Part of the conversation

Many QAnon proponents post-election have worked to reframe the COVID-19 vaccines not as the solution to a global pandemic but as an attempt by a cabal to control the minds of a hapless world.

Opposing mask mandates, vaccines and lockdowns have been effective campaigns for QAnon as it mobilizes anti-government sentiment common among the conservative base of the Republican Party. These efforts appear to be coalescing around bans on making vaccines mandatory.

Missouri's Republican-led Senate recently voted to ban so-called vaccine passports, and Texas, Florida, Idaho and Utah have all passed similar legislation. Iowa Gov. Kim Reynolds is asking for similar legislation. It is unclear to what extent these bans were influenced by QAnon. But they do echo the opposition to masks and vaccines that have shaped the conspiracy.

In California, a recall campaign against Democratic Gov. Gavin Newsom has targeted his COVID-19 response. The campaign was initially organized by people affiliated with both right-wing militias and QAnon supporters. 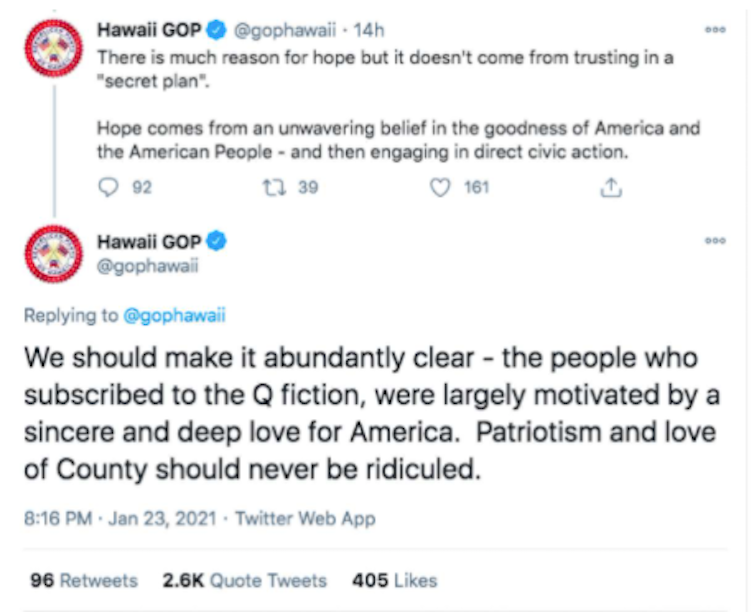 These tweets in late January, one of which expressed sympathy for QAnon believers, led to the resignation of the head of the Hawaii Republican Party. Screenshot, Hawaii Free Press

Yotam Ophir, a communications scholar at the University at Buffalo, has studied QAnon. He told me that he doesn't "see a reason to believe the conspiracy will go away anytime soon."

Part of this is that QAnon has deep historical roots in a variety of other conspiracies, including a centuries-old anti-Semitic conspiracy of a blood libel. The flexibility of the conspiracy has also proved resilient within a shifting political landscape.

Perhaps the biggest threat posed by QAnon is articulated by Lindsay Schubiner, a program director at the Western States Center in Portland, Oregon, which works to support democracy and challenge white nationalism.

"Bigoted conspiracy theories like QAnon have an enormous influence on the context in which local government operates," Schubiner told me. "Democratic governance is hard to achieve if we don't live in a shared reality, and that's as true on the local level as it is on the national level."