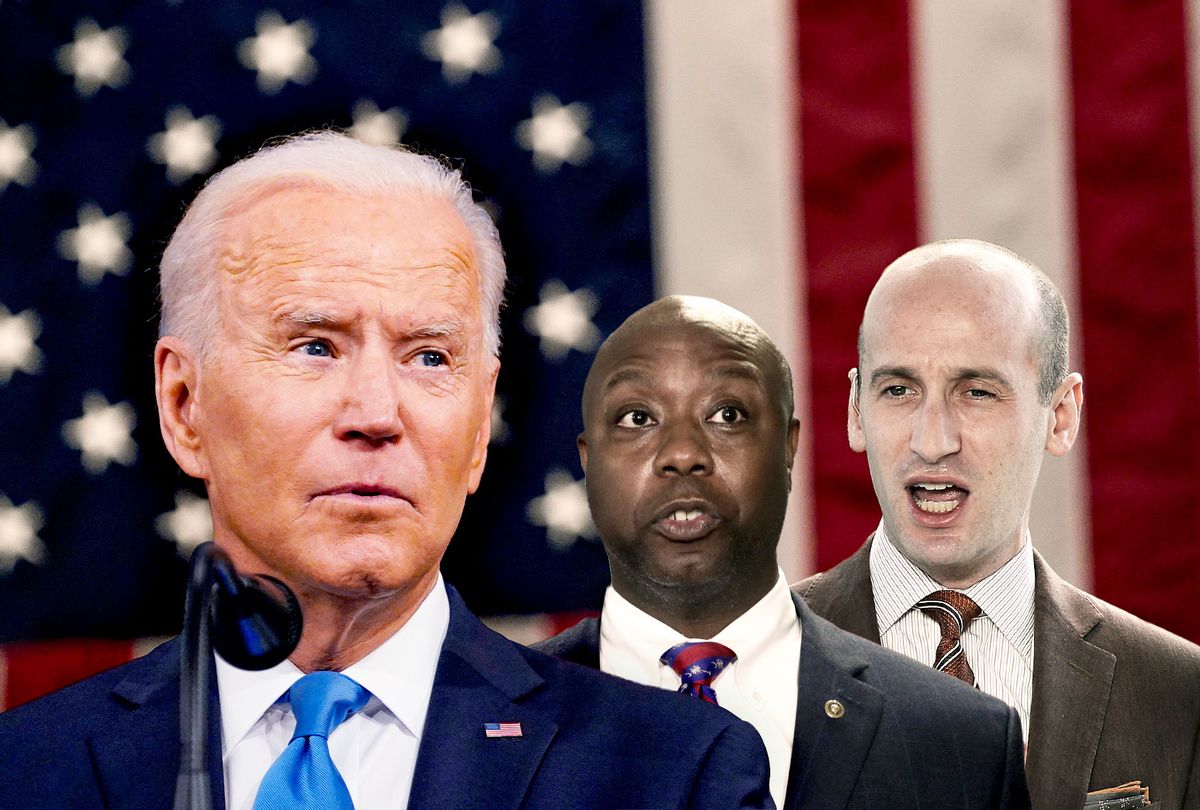 "Uncle Tim" trended for hours on Twitter after Sen. Tim Scott of South Carolina, the only Black Republican in the Senate, opened up about his personal experience of being derided by progressives who have in the past called him an "Uncle Tom."

"I get called Uncle Tom, and the N-word by progressives, by liberals," Scott said during his response to President Biden's first address to a Joint Session of Congress.

"Hear me clearly," he then continued, "America is not a racist country,"

The admission, coupled with Scott's declaration that "America is not a racist country," drew heavy criticism from many Black commentators on Twitter, who were quick to point out that the statements appeared contradictory.

The "Uncle Tim" trend was eventually blocked by Twitter. A spokesperson for the company told Salon that the play on "Uncle Tom" had been prevented from trending any longer: "I can confirm that we are blocking the phrase you referenced from appearing in Trends."

The spokesperson also referred to a line from the company's policies on Trends: "We want Trends to promote healthy conversations on Twitter. This means that at times, we may not allow or may temporarily prevent content from appearing in Trends until more context is available. This includes Trends that violate The Twitter Rules."

Scott's response to Biden's speech drew myriad reactions from Democrats and Republicans alike. During his formal response on Wednesday, the congressman said that Biden "seems like a good man" but has put forth a "liberal wishlist of big government waste," with sweeping government spending bills like the American Jobs Act and the American Families Plan.

"Just before COVID, we had the most inclusive economy in my lifetime," he added, offering a litany of out-of-context statistics that indicate apparent economic success within minority communities.

Scott also accused the Democrats of planning a future "power grab," citing Biden's infrastructure bill as well as the President's calls to expand the Supreme Court. "Our best future won't come from Washington schemes or socialist dreams," he said. "It will come from you — the American people."

Scott's speech drew wide support from conservatives in both government and media.

Other GOP politicians and commentators focused their attention on Biden's speech, which they argued was boring or lacked originality. Stephen Miller, Senior Advisor to former President Trump, claimed that Biden's speech was "written in the 'laundry list' style — the least inspired format for a congressional address."

"It is striking just how tedious & unoriginal the rhetoric was in Biden's speech," he added. "Also, no outreach, no bipartisanship, no surprises, no warmth — a lifeless and dry address."

Fox News host Sean Hannity tarred Biden's speech as "a big bore socialist speech" in which the President proposed a "multi-trillion dollar, far-left, socialist, statist, authoritarian wish list. Many on Twitter were quick to point out that Sen.Ted Cruz, R-Tex., appeared to have been dozing off during Biden's address – or at least putting on the performance of doing so. Cruz later called the speech "boring, but radical."

The GOP response to Biden's speech was not, however, unilaterally negative. Fox News Chris Wallace on Wednesday threw his support behind the President's address, calling it a "popular speech."

"You know, I think this is going to be a popular speech with the American people," the newsman argued, going against the grain of his colleagues. "He offered a lot of stuff. Four trillion dollars will buy a lot of stuff, from millions of jobs to child-care to community health centers, all kinds of stuff, community colleges."