We still blow up mountains to mine coal: Time to end the war on Appalachia 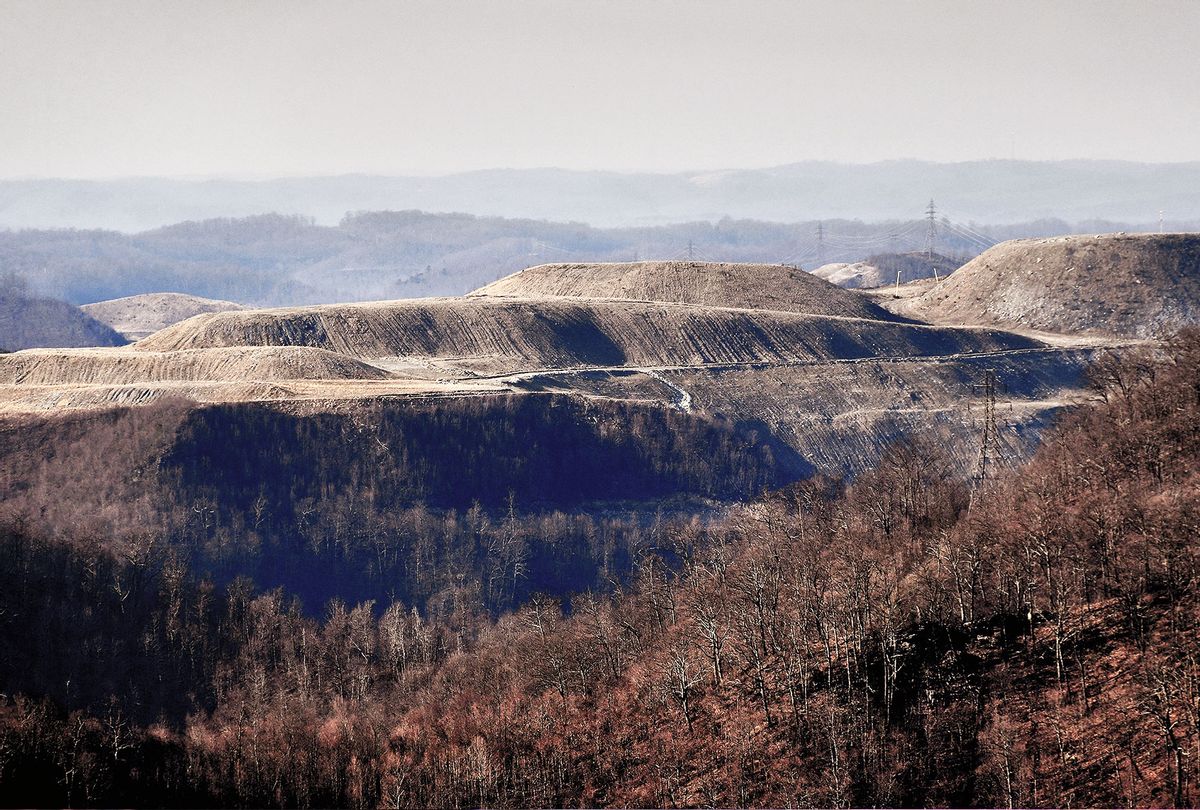 One can see the effects of a mountaintop coal removal operation on the land near Beckley, West Virginia (Michael S. Williamson/The Washington Post via Getty Images)
--

On Earth Day this year, as President Biden assembled world leaders to a climate summit to focus on a "clean energy future," retired coal miner Chuck Nelson hunkered down in the green hills of West Virginia, recovering from a recent stroke and with one remaining kidney, as thousands of tons of explosives from mountaintop removal strip mining operations detonated nearby with a toxic haze of coal dust.

Yes, Greta (Thunberg), we still blow up mountains in the United States to mine deadly coal.

While coal mining has decreased dramatically in recent years, state permits for reckless mountaintop removal operations by absentee corporations, which involve only small numbers of non-union heavy equipment operators and explosives, in contrast to labor-intensive underground mines, continue to be doled out in central Appalachia in a desperate attempt to shake down the region for a final coal tattoo.

In fact, the West Virginia Department of Environmental Protection celebrated Earth Day by rubber-stamping a new strip-mining permit for an out-of-state coal company, slated to destroy 1,085 acres of forested ridges and wreak havoc for neighboring communities for the next eight years, despite decades of protest by local citizens and reams of shocking health studies on heightened cancer, heart and birth defect rates associated with mountaintop removal mining dust.

The endless war on the central Appalachian mountains continues.  Needlessly, we should add.

"Millions of acres of Appalachian mountains have been permanently destroyed, and thousands of miles of streams have been permanently buried," emailed Nelson, whose wife died from chronic obstructive pulmonary disease in 2019. "With a flow of permits being processed right now, thousands more acres are planned to be wiped away forever. As devastating as mountaintop removal mining is to our majestic mountains, and the people's health impacts, only 3% of it is for electrical demand — only 3%. Mountaintop removal mining goes against everything we're fighting for in trying to deal with the climate crisis. These are criminal acts carried out by criminal enterprises."

Instead of recognizing the century-old legacy of ruin in coal country, from Appalachia to Alaska and 20-odd states and several First Nations in between — including an enduring array of abandoned mines, dangerous coal slurry impoundments, fraudulent "reclamation" projects, polluted waterways, desperate black lung victims, and gutted and sick communities with few economic options — the Biden administration risks falling into the trap of outdated policies.

Listen here: Advocates in coal country have been calling for a Green New Deal since 2008 — and a coalfields regeneration fund for everyone in coal mining communities, not simply the out-of-state companies, and not just throwing out a few job training opportunities for the dwindling ranks of largely non-union miners.

If the Biden administration and Congress truly want to build back better, they should have passed the RECLAIM ACT years ago, simply to start the process of reclaiming and reinvesting in all mining regions. And they should now double down on the commitment and make the Appalachian region, like all extraction zones from the Illinois Basin to the Navajo Nation to the Powder River Basin, a showcase for a clean energy economy, not a backwoods of denial.

If the Biden administration and Congress want to end the war on Appalachia, they should simply pass the Appalachian Community Health Emergency (ACHE) Act, which calls for a moratorium on such devastating operations until a basic health study is completed.

This is one of the most shameless realities in regulation: One of the Trump administration's first acts was to cancel a long-term health study on the impacts of mountaintop removal mining.

The sad truth is that this humanitarian and environmental crisis has been a federally sanctioned disaster since Jimmy Carter begrudgingly signed the Surface Mining Control and Reclamation Act in 1977, complaining that it would allow "the mining companies to cut off the tops of Appalachian mountains to reach entire seams of coal."

Let's repeat that phrase, "cut off the tops of Appalachian mountains" — as in the tops of more than 500 mountains for over a half-century, literally clear-cutting deciduous forests and the region's ancient carbon sink, blowing ridges into oblivion with explosives and dumping the toxic remains and pulverized heavy metals in polluted streams, and ravaging the lives of citizens considered collateral damage, along with everything else in the way.

It doesn't have to be like this. Last month, Canadian government officials reversed their own 45-year policy for open-pit coal mining, admitting, "We didn't get this one right."

It's time for Biden and Congress to get this one right in Appalachia and all mining communities.

Just listen to Vernon Haltom, director of Coal River Mountain Watch, based in the frontline extraction zones of West Virginia, not in Washington, an organization that deserves as much support as possible:

With millions of Americans seriously ill or dead from the COVID pandemic, the stockholders and executives of Alpha Metallurgical Resources have no qualms about filling the air in Appalachian communities with carcinogenic blasting dust. Their enablers at the West Virginia Department of Environmental Protection have no qualms about rubber stamping new and renewed mountaintop removal permits, "just following the law" to sentence innocent people to death and misery. People like WVDEP permit supervisor Laura Claypool face no negative consequences for their actions, apparently not even remorse, but the people face the consequences of death. How do they sleep at night?  It's not as if they don't know about the dozens of peer-reviewed health studies demonstrating that mountaintop removal is a deadly public health threat. No, they sleep soundly in the comfort of a steady job doing the coal barons' bidding. The WVDEP has made it personal by approving the death of friends and family like Judy Bonds, Larry Gibson and Joanne Webb, so they shouldn't be surprised if we make it personal about their cold, inhumane decisions. But since they've proven their incapacity for basic human decency, we need the Appalachian Communities Health Emergency (ACHE) Act, H.R. 2073 in this U.S. Congress, to protect the people.