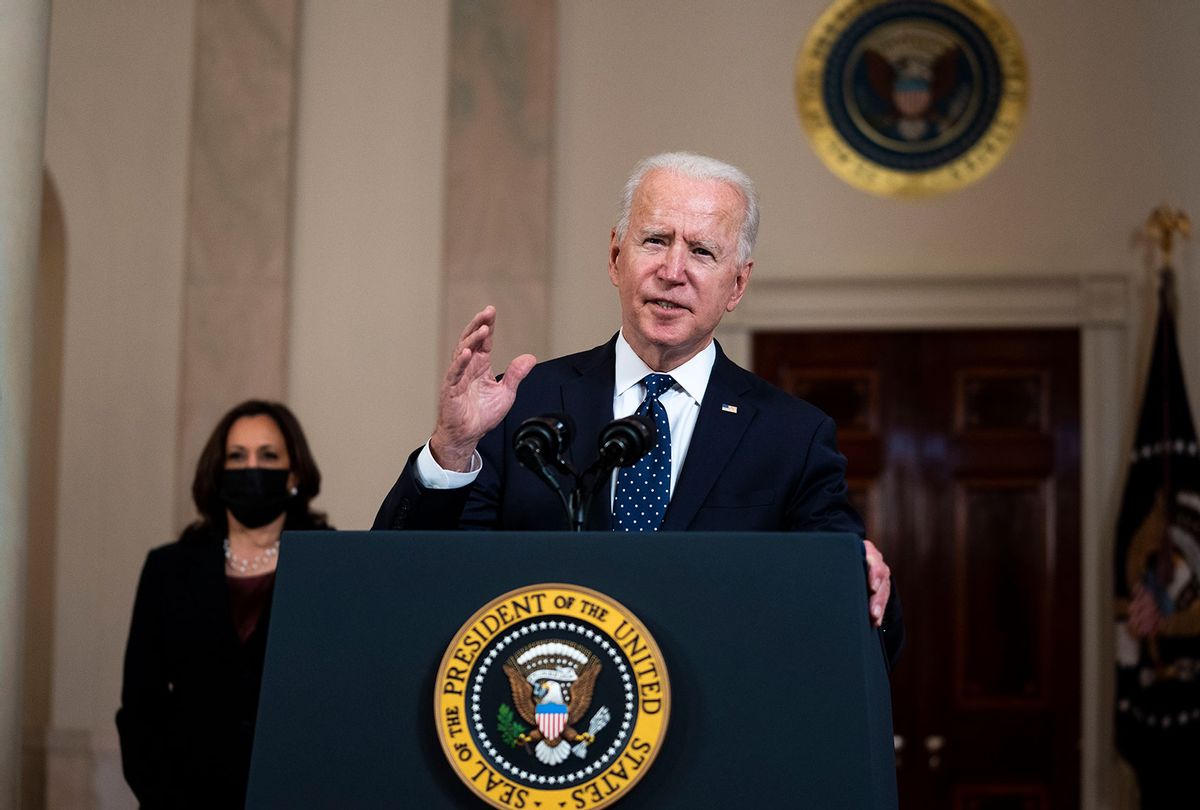 U.S. President Joe Biden makes remarks in response to the verdict in the murder trial of former Minneapolis police officer Derek Chauvin at the Cross Hall of the White House April 20, 2021 in Washington, DC. Chauvin was found guilty today on all three charges he faced in the death of George Floyd last May. (Doug Mills/Pool/Getty Images)
--

At 100-plus days into his presidency, Joe Biden is committed to being a champion, not just a caretaker or placeholder.

His first speech to Congress last week outlined a bold and transformative plan to improve American society. The genius of Biden's proposal is that the policies he proposes are very much a function of common sense and not easily dismissed by fair-minded and reasonable Americans as being "too radical."

As I watched Biden's speech to Congress, read the transcript and then watched the speech again with fresh eyes the next day, for all the talk about public policy it is that latter role — as role model for a nation — that most resonated with me.

At its core, Biden's remarkable and humane speech to Congress offered an outline for expanding America's social democracy. He spoke specifically about improving the life chances for future generations by expanding access to health care and education, as well as enacting policies to address income and wealth inequality.

Biden's proposed tax plan is also an example of shared social responsibility, in which the richest individuals and most successful corporations will be required to pay their fair share to support the society that enabled them to accrue such fabulous amounts of wealth and income.

Biden's comments on white supremacy and other forms of hate offered a powerful and simple intervention: America cannot have a healthy democracy and society if it does not address racial injustice and other forms of bigotry and inequality along the color line and beyond.

Biden did not flinch from calling out the lethal and treasonous attack on America's multiracial democracy that occurred when Trump's followers overran the Capitol on Jan. 6. He also memorialized the hundreds of thousands of dead from the coronavirus pandemic.

Biden's example of what it means to be a president who shows real care and concern for the American people is made even more profound compared to the behavior of his predecessor. Among his many character flaws and overall malice, Donald Trump was most notably a role model for sadism, cruelty, selfishness and malignant narcissism. The fact that Trump remains so popular among his followers is as much an indictment of their individual and collective character defects as of the pathocracy that produced such people.

During these first 100 days as president — and throughout his life more generally — Joe Biden has shown himself to be the anti-Trump. The president as national role model offers an example for young people. Biden's role in that capacity should terrify Republicans and other members of the white right and the Trumpian neofascist movement.

Why? Because they are at great risk of losing the future.

Political values are heavily influenced by early life experiences. These include interactions with family, friends, peers, teachers and other important people in our lives. Societal institutions like schools and churches also play a key role in shaping our political values, as do landmark generational events such as war, economic crisis, natural calamities, great technological shifts and other disruptions, both positive and negative. Presidents and other leaders can also have a profound influence on our political development. Popular culture is also integral to political socialization.

An individual's voting behavior can certainly shift later in life. But for the most part, core political values are formed much earlier and continue to influence a person throughout adulthood.

Young people coming of age today were born into a world where it felt normal for them to see a Black man as president. They were teenagers during the Age of Trump and ascendant American neofascism, with all the trauma, destruction and chaos of those years. Many of these young people will have cast their first votes for Joe Biden and Kamala Harris, and have arrived into political adulthood during a plague and the resulting economic and social misery.

Joe Biden has an opportunity to show this new generation of voters that responsible government can be a positive force in their life, enhancing their freedom and opportunities instead of diminishing them.

Writing at Vanity Fair, Jeff Sharlet highlights this aspect of Biden's speech, putting it in the larger context of the Democratic Party's approach to governance:

But in Biden's speech ambition and aggression weren't a one-or-the-other proposition. Ambitious? Obviously. Aggressive? That too. "We are all created equal," he nearly shouted. He sounded mad. How could he not? It's an ideal we've never embodied, but under Trump, we stopped even pretending to try. The center did not hold. Biden said "build back" but in the most bracing moments of his speech he proposed, with grief and anger as much as hope, to build what has not been before, to attempt to build not only what we can but something resembling, at least, that which is needed. Such is the ambitious, aggressive Democratic Party that Donald Trump unwittingly summoned into being.

It's a party that at long last seems to be aiming not merely to echo in milder terms Reagan's mindless banal, his mockery of what he dubbed in 1986 the "nine most terrifying words": "I'm from the government, and I'm here to help." I'm from the government, Biden declared, clearly and with force. "It's time we remembered," he said, "that 'We, the people''' — a phrase MAGAnauts attempted to make over as a mantra for insurrection — "are the government." And then, tenderly — his real rhetorical strength — "you and I."

Whatever this will actually mean in practice, Joe Biden's rejection of the Reagan-era capitalist myth that wealth and income will "trickle down" from the plutocrats and mega-corporations to the public at large has the potential to be transformative for American society as a whole. This is especially true for young people, a group that knows through personal experience just how broken and unjust the American economy really is.

If successful, Biden's efforts to create a more just American society and democracy has the potential to win over an entire generation (or more) of younger voters. In combination with the country's demographic shifts along the color line, an aging population of exurban white conservatives and a declining rural economy, the Democratic Party should be able to bulldoze the Republican Party.

Of course that is not guaranteed, and today's Republican Party is doing everything it can to prevent such an outcome. Its plan is effectively to overthrow multiracial democracy and replace it with a white-dominated new American apartheid.

The Republican Party knows it cannot win free and fair elections. Its leaders have admitted as much publicly. Demographic trends are against the Republicans, and their policies are widely unpopular. This is why their party and its propaganda machine have enthusiastically embraced white supremacist lies claiming that white people are being "replaced" by nonwhite foreign "invaders."

As David Rothkopf explained to me in a recent conversation for Salon:

The Republicans are afraid of democracy. They're afraid that if every American had an equal right to vote, the Republican Party would not exist. As demographic trends continue in the United States over the next few decades, we are going to be a minority-majority country. The United States will be a country where people of color are the majority. The Republican Party's message of racism and clinging to the cultural models of the 19th century will not be able to survive.

The only way the Republican Party can survive is if they gut our democracy and essentially create a kind of two-tiered system in U.S. politics, where if you are white and conservative you get more votes than if you are Black or brown and progressive.

It is not as simple a story, of course, as the tired trope that the young people will save us. For example, public opinion and other research shows that younger white people do not magically abandon the racist or white supremacist values of previous generations. They simply learn new ways of hiding and performing them. The ranks of the American neofascist movement and the global right are replenished by younger people, who as always are repositories for the bad habits and bad values of the previous generation.

By being a humane president, and pushing an ambitious agenda that supports those values, Joe Biden has an opportunity to create something good for America out of a dire crisis. Such moments are rare. The Republican Party and its followers and allies understand this, and will use any means necessary to stop this new America from being born.

The Jim Crow Republicans and the neofascists are obsolescent. They see the future as their enemy — and they are correct.