"This is apartheid, pure and simple," says Rep. Rashida Tlaib as crackdown on Jerusalem protests intensifies 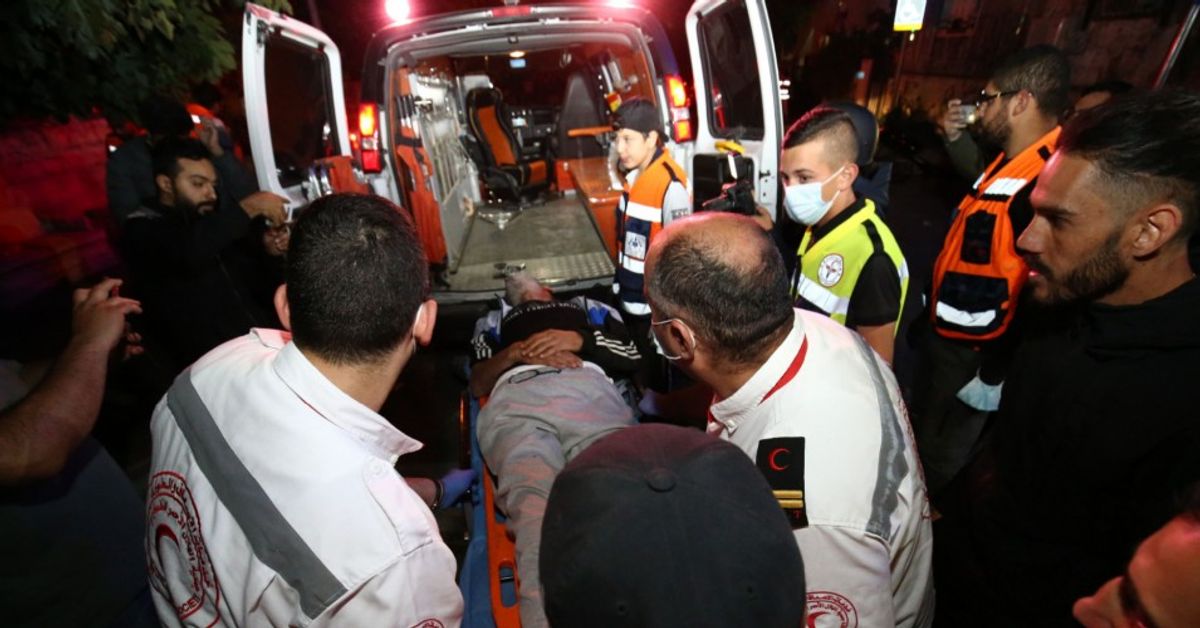 Injured Palestinian Salih Diyab is carried to an ambulance after Israeli forces cracked down on demonstrations against the forced eviction of Palestinian families from their homes in East Jerusalem's Sheikh Jarrah neighborhood on May 6, 2021. (Mostafa Alkharouf/Anadolu Agency via Getty Images)
--

More than 200 Palestinians were wounded and at least one partially blinded during weekend protests in East Jerusalem as Israeli police fired rubber-coated steel bullets and stun grenades at thousands of people who were protesting Israeli settlers and security forces' ongoing effort to dispossess Palestinians of their land in the occupied territory.

"What's happening in Jerusalem and Palestine more broadly is not a 'clash' or a 'scuffle,' but a state-sanctioned campaign of Israeli violence against Palestinians," the Institute for Middle East Understanding (IMEU) said Saturday. "To pretend otherwise is to minimize the horrors we are witnessing."

As Al Jazeera reported, several hundred riot gear-clad Israeli police officers deployed to the Al-Aqsa mosque on Friday night, where 70,000 Muslims had gathered at Islam's third-holiest site for the last Friday prayer of Ramadan. Thousands of worshippers stayed to demonstrate against Israel's attempted expulsion of Palestinians from the neighborhood of Sheikh Jarrah.

According to Al Jazeera, Israeli security forces opened fire on Palestinians at Al-Aqsa and throughout the city on Friday night, shooting people with rubber-coated steel bullets and using stun grenades on crowds that were armed with no more than shoes, chairs and rocks.

The Palestinian Red Crescent emergency service said Saturday that at least 205 Palestinians had been injured, mostly from rubber-coated rounds and shrapnel from stun grenades. Of the wounded, 88 were hospitalized, including one victim who lost an eye, two with serious head trauma, and two with fractured jaws.

While Israeli settlers, with state support, have been seizing property in East Jerusalem — which was conquered by Israeli troops during the 1967 Six Day War and has been unlawfully occupied ever since — for decades, their violent methods of displacement have recently come under increased scrutiny from a handful of U.S. lawmakers who have joined progressive advocates in calling for the defense of Palestinians' human rights, as Common Dreams reported last week.

The Jerusalem municipality is planning to demolish 100 buildings, home to 1,550 Palestinians, in the neighborhood of Al-Bustan to build a biblical theme park. In Sheikh Jarrah, meanwhile, Israeli settlers are trying to push 169 Palestinians from a dozen families out of their homes. The United Nations on Friday described the forced evictions, ordered by an Israeli court, as a violation of international law and potential war crime.

Bashar Mahmoud, a 23-year-old protester from the nearby Palestinian neighborhood of Issawiya, told Al Jazeera that "if we don't stand with this group of people here, [evictions] will [come] to my house, her house, his house and to every Palestinian who lives here."

The news outlet noted that Israel's Supreme Court will hold a hearing Monday on the eviction of four Palestinian families from their homes in Sheikh Jarrah by the Nahalat Shimon settler organization.

On Saturday, the IMEU shared a video depicting Israeli security forces blocking a major highway to prevent Palestinians from traveling to Al-Aqsa for Laylat al-Qadr, the holiest night of the year for Muslims. Undeterred, many began walking to the mosque, while others reportedly "forced the roads open."

Later on, however, Israeli police once again began attacking Palestinians in Sheikh Jarrah, according to a video shared by Mohammed el-Kurd, a Palestinian resident of the neighborhood. Additional footage shows Israeli security forces unleashing stun grenades on Palestinians in other parts of occupied East Jerusalem.

People "are bracing for more violence in the coming days," Al Jazeera reported. As the news outlet explained:

Sunday night is "Laylat al-Qadr" or the "Night of Destiny," the most sacred in the Muslim holy month of Ramadan. Worshippers will gather for intense nighttime prayers at the Al-Aqsa mosque compound in Jerusalem's Old City.

Sunday night is also the start of Jerusalem Day, a national holiday in which Israel celebrates its annexation of East Jerusalem and religious nationalists hold parades and other celebrations in the city.

In addition, the Israeli Supreme Court's verdict on the potential evictions of dozens of Palestinians is expected to be handed down Monday.

The IMEU on Friday said that "Israel's violence has a clear purpose: ethnically cleanse Jerusalem of Palestinians to allow Israeli settlers to take over Palestinian homes."

"Too many are silent or dismissive as our U.S. tax dollars continue to be used for this kind of inhumanity," she added.