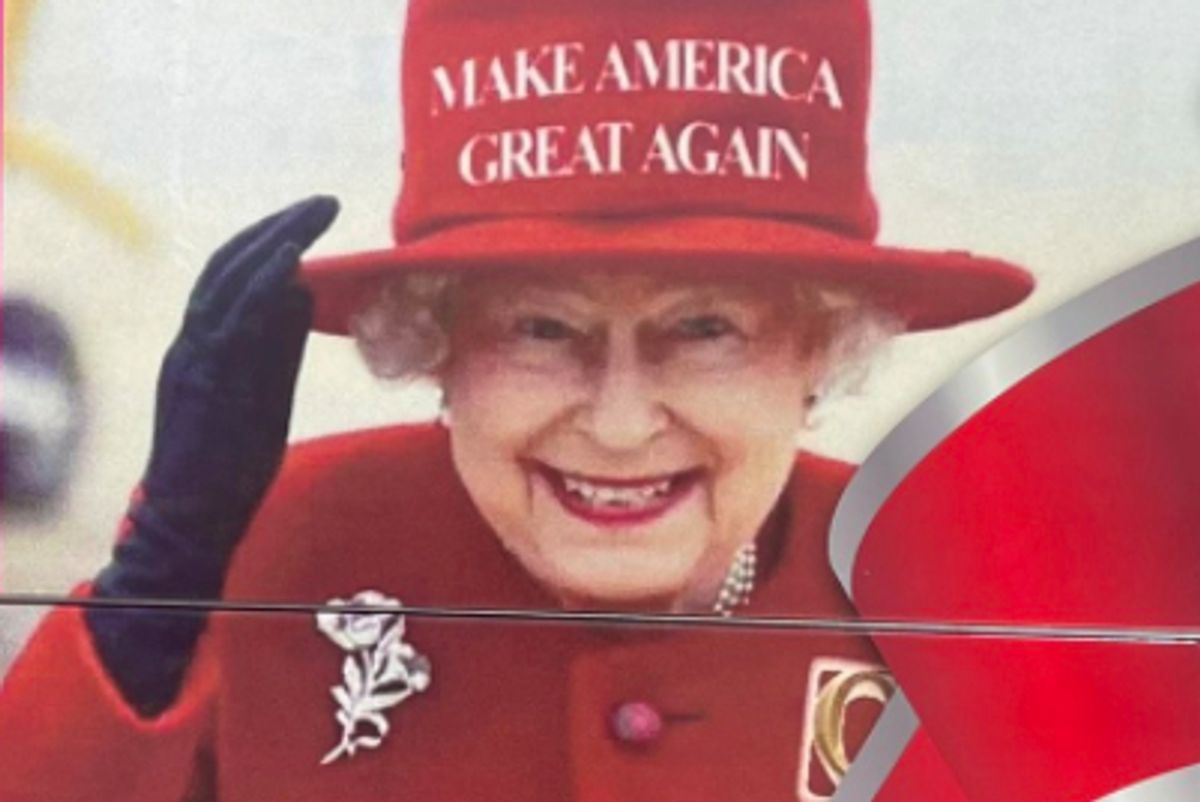 The doctored image of Queen Elizabeth II that sparked an official complaint from Buckingham Palace. (Twitter)
--

This article has been updated with additional comments.

A doctored image of Britain's Queen Elizabeth II wearing a "Make America Great Again" hat and Qanon brooch will be removed from the artwork on a pro-Trump bus following a rare official complaint from Buckingham Palace Wednesday, Salon has learned.

The vehicle, owned by a Trump supporter named Buddy Hall, was a favorite backdrop at the Florida rally held last week by Reps. Matt Gaetz and Marjorie Taylor Greene in the country's largest retirement community, The Villages. According to a GoFundMe page for the venture, it was created as an "unofficial tour bus" for Trump's 2020 reelection campaign.

Greetings from The Villages, Florida. pic.twitter.com/4pBTUrHZdP

Hall tells Salon that he had plans to re-wrap the "Trump Train" prior to the Palace's request —  so the Queen need not worry about her image appearing alongside Pence and Trump any longer.

"Even if the Queen wrote me and said, 'Please keep my picture on there, I love it,' we are still taking it off," Hall said Wednesday night. "It's been in the designs now for two months now."

The pro-Trump bus owner also shared with Salon that the new version of the bus will feature a "Wall of Appreciation," which will feature the likes of Fox News host Sean Hannity, MyPillow CEO Mike Lindell, and Sen. Ted Cruz, among others.

BuzzFeed News first reported Buckingham Palace's official request for the image to be removed, with a spokesperson telling the outlet, "representations asking for [the photo's] removal have been made."

A number of prominent Republicans have posed for pictures in front of the bus — including Donald Trump, Jr. and his girlfriend, Kimberly Guilfoyle, as well as another picture Hall posted of himself and Greene. 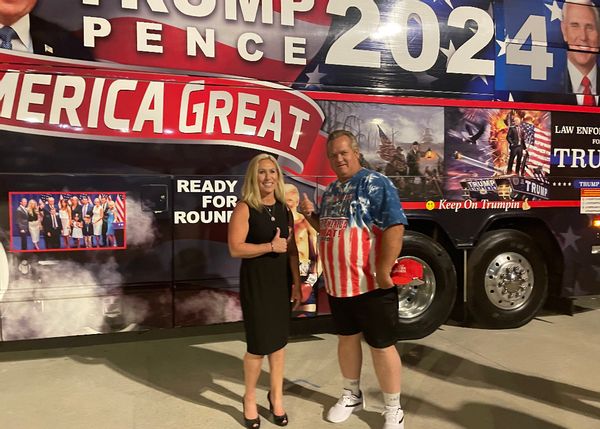 Both Greene and Gaetz' spokespeople laughed off the Palace's complaints. According to BuzzFeed News:

A spokesperson for Greene told BuzzFeed News that they were not affiliated with the bus but did not see any problem with the fact that the Queen's image was being used. "You do know what a meme is right? Isn't that what Buzzfeed is all about?"

"We're sure Her Majesty has greater concerns than motor vehicle traffic in The Villages — Florida, and we were thrilled to see her government introducing voter ID laws as announced in the recent Queen's Speech," Gaetz PR spokesperson Harlan Hill told Salon.

The original image of the Queen was reportedly taken by Getty Images photographer Christopher Furlong in 2011.