The politicization of the military: In an open letter, 124 retired officers spread Trump's Big Lie to attack Biden 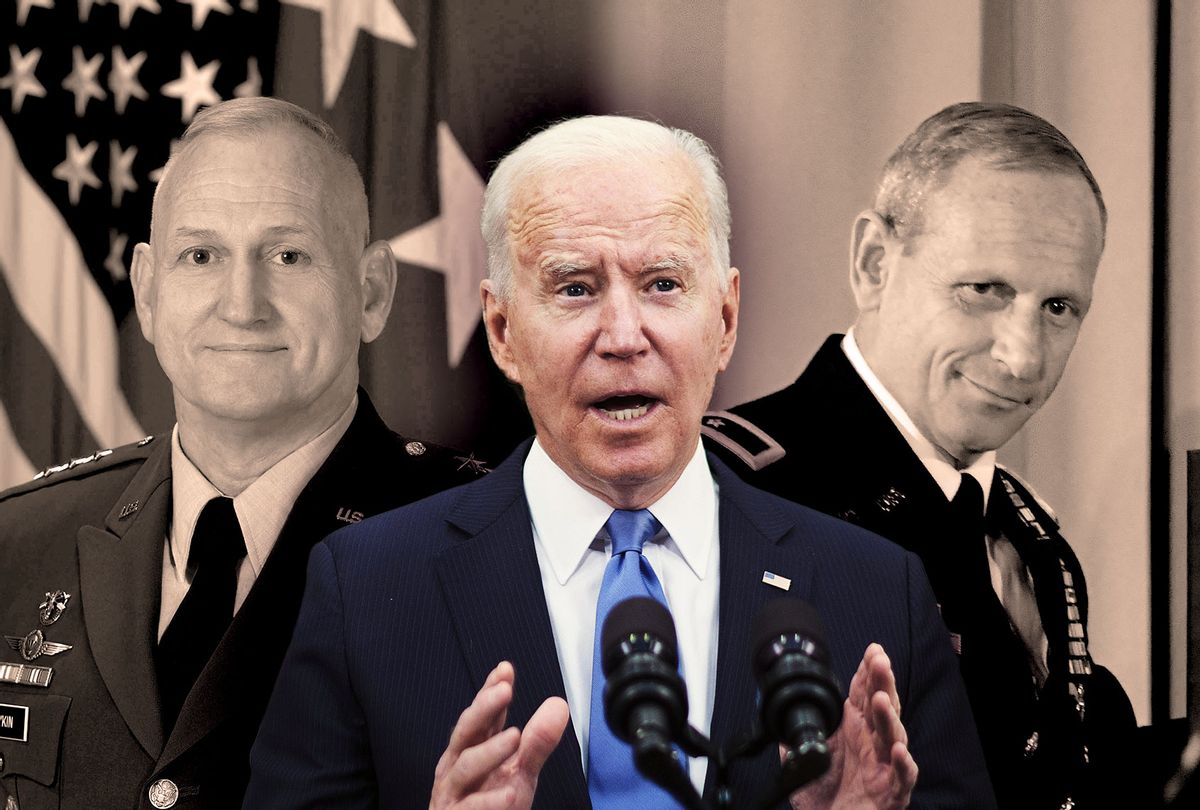 Over 120 retired military generals and admirals penned an open letter questioning the legitimacy of President Biden's win in the 2020 election and whether the president has the mental fitness required to perform his job.

"Without fair and honest elections that accurately reflect the 'will of the people' our Constitutional Republic is lost," the signatories wrote, per their letter first obtained by Politico.

"Election integrity demands insuring there is one legal vote cast and counted per citizen," they continued. "Legal votes are identified by State Legislature's approved controls using government IDs, verified signatures, etc. Today, many are calling such commonsense controls 'racist' in an attempt to avoid having fair and honest elections. Using racial terms to suppress proof of eligibility is itself a tyrannical intimidation tactic."

The signatories, which have declared themselves part of the Flag Officers 4 America – a group of retired military officers that have pledged "to support and defend the Constitution of the United States against all enemies, foreign and domestic" – include Army Brig. Gen. Don Bolduc, who is running for senate in New Hampshire; Army Lt. Gen. William Boykin, the former deputy undersecretary of defense for intelligence for former President George W. Bush; Vice Adm. John Poindexter, the former national security adviser under President Ronald Reagan; and Army Maj. Gen. Joe Arbuckle, a Vietnam War veteran.

"Under a Democrat Congress and the Current Administration," they argued, "our Country has taken a hard left turn toward Socialism and a Marxist form of tyrannical government which must be countered now by electing congressional and presidential candidates who will always act to defend our Constitutional Republic."

They continued: "He must be able to quickly make accurate national security decisions involving life and limb anywhere, day or night. Recent Democrat leadership's inquiries about nuclear code procedures sends a dangerous national security signal to nuclear armed adversaries, raising the question about who is in charge. We must always have an unquestionable chain of command."

During the 2020 campaign trail, former President Trump routinely referred to Biden as "Sleepy Joe" and "Slow Joe," alluding to Biden's various public gaffes, which some speculated were due to a stutter. It goes without saying that Trump himself was a purveyor of a great many gaffes during that time as well.

Earlier this month, the president's personal physician, Dr. Kevin O'Connor, affirmed that Biden was in good health for his age and is "fit to successfully execute the duties of the Presidency."

The letter also regurgitated timeworn conservative talking points about security at the border and the military prowess of China. "Establishing cooperative relations with the Chinese Communist Party emboldens them to continue progress toward world domination, militarily, economically, politically and technologically," it read. "We must impose more sanctions and restrictions to impede their world domination goal and protect America's interests."

On immigration, the ex-military officials went on to write: "Illegals are flooding our Country bringing high economic costs, crime, lowering wages, and illegal voting in some states. We must reestablish border controls and continue building the wall while supporting our dedicated border control personnel. Sovereign nations must have controlled borders."

The letter sounded alarms amongst military experts, as well as officials in the Biden administration, according to Politico, considering those in the military are instructed to remain as apolitical as possible.

"We've seen isolated statements from retired generals and admirals like McChrystal or McRaven, but this statement is the first full-blown partisan attack from a large group of retired officers that is not explicitly tied to an election or specific issue," Jim Golby, a senior fellow at the Clements Center for National Security at The University of Texas at Austin, told Politico.

The letter comes amid a national effort led by Defense Secretary Lloyd Austin to root out right-wing extremism within the ranks of the military. In late April, it was reported that at least 52 active or retired military, law enforcement, or government service employees were connected to the violent breach of the Capitol on January 6.