The entire Republican Party is determined to prevent as many Democrats from voting as possible. Manchin must see it 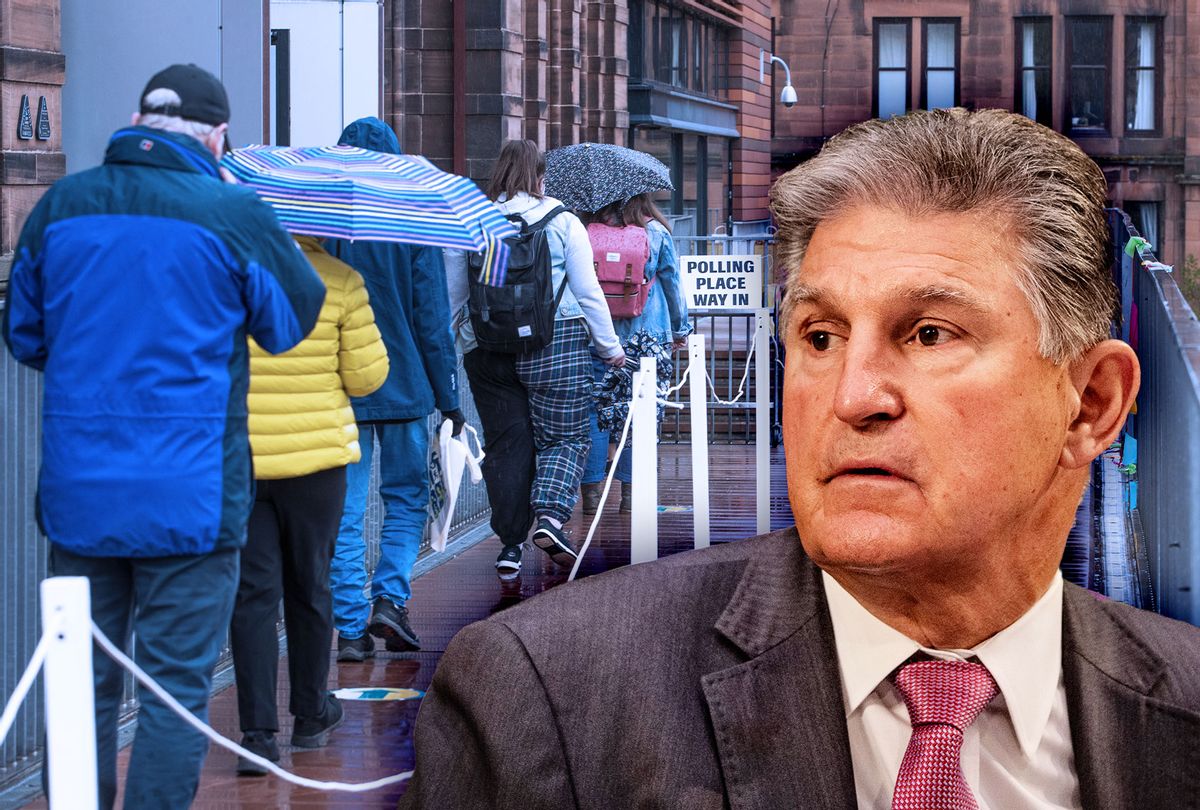 One of the big questions that still seems to befuddle the media is "how in the world did the Republican Party get so crazy that they would embrace the Big Lie?"

The knee-jerk assumption is that Donald Trump, with his crude declaration back in 2016 that he would only accept the results of the election if he won brought this level of electoral lunacy to the GOP. While it's true that believing (or pretending to believe) that Donald Trump is incapable of losing an election has become a litmus test for party membership, the anti-democratic machinations that are happening all over the country are not new at all. In fact, the party's ongoing, meritless, insistence that undocumented immigrants are voting by the millions and that voter fraud is rampant among Democratic voters is why it was so easy for Donald Trump to persuade his rabid following that it happened to him.

You can go back many decades to find examples of disenfranchisement of Black people and immigrants, but as I wrote a while back, the modern conservative movement's push to restrict voting really took off after the Rev. Jesse Jackson's successful program to register voters in urban America. The Democrats fought back and passed major voting rights legislation which President George H.W. Bush promptly vetoed. That was the "motor voter bill" which required that states effectively register any citizen over 18 when they obtain or renew a driver's license. It also allowed registration by mail and tasked government offices with voter registration duties. The Republicans howled like banshees, as usual, charging the Democrats with trying to expand their own ranks —as if Republicans don't get driver's licenses too — when President Bill Clinton signed the bill as one of his earliest actions upon taking office in February 1993. They haven't stopped screaming about phantom "voter fraud" in the 30 years since.

And they didn't just scream about it. Republicans took action on the state level, winning an early battle when George W. Bush managed to eke out a disputed victory after his brother, Governor Jeb Bush, purged the Florida voter rolls of many eligible voters in numbers that could have made the difference with such a razor-thin margin of victory. Year after year, Republicans have pounded the message to their base that the only way Democrats win is by cheating. (The irony that the two politicians most credibly accused of cheating are none other than GOP leaders Richard Nixon and Donald Trump cannot be overstated.)

The 2000 election must have reinforced their belief that Democratic vote suppression and disenfranchisement was a winning strategy because Republicans immediately set about using the federal government to get the job done. First, they embarked on a mission to "root out" voter fraud but after five years of trying they just couldn't come up with goods. That's because there really isn't any to speak of. They even deployed the Department of Justice to create phony accusations of voter fraud and it was only because a handful of Republican U.S. Attorneys refused to go along (and were subsequently fired) that the facts came out and the Attorney General had to resign.

But the federal government wasn't really a big player in this program. It was the think tanks and interest group organizations, backed by big money, that did the heavy lifting in the states. One of the Koch Brothers' organizations, the American Legislative Exchange Council, which creates so-called "model legislation" for lockstep right-wing state legislatures to easily enact without having to even understand what they're doing, was heavily involved in various vote suppression schemes over the past couple of decades. Anti-immigrant operatives, like former Kansas secretary of state Kris Kobach, networked all over the country providing Republican politicians with templates of vote suppression bills. (You may remember Kobach was later tapped by Trump to prove that millions of non-citizens had voted in 2016, giving Hillary Clinton a popular vote victory, but he was unable to do it and slunk off back to Kansas where he keeps running for office and losing.)

A few weeks ago, Salon's Igor Derysh took a deep dive into all of this noting that the rise in activity in this sector of right-wing activism had taken off in the wake of Trump's loss. He listed groups that are involved in selling Trump's lie that he won the election, from faith-based groups like The Family Research Council and the Susan B Anthony List to Freedomworks and the Tea Party Patriots, all of which were focusing their full attention on keeping the delusion going. Derysh homes in on the motive for many of them to do so:

Frank Cannon, senior strategist for the Susan B. Anthony List and American Principles Project, told The New York Times that conservative activists quickly realized that the only way they could keep donations rolling in is by making the effort to restrict voting access the "center of gravity in the party."

Leave it to right-wingers to find a way to make a profit from The Big Lie. No wonder they love Donald Trump so much.

Derysh also noted that The Heritage Foundation and ALEC were working together on this project, creating some of that "model legislation" for Republican-led states to enact as quickly as possible. On Thursday, Mother Jones published a leaked video of Jessica Anderson, the executive director of Heritage Action for America, giving big money donors an update on their progress:

"Iowa is the first state that we got to work in, and we did it quickly and we did it quietly," she said. "We helped draft the bills. We made sure activists were calling the state legislators, getting support, showing up at their public hearings, giving testimony … little fanfare. Honestly, nobody even noticed. My team looked at each other and we're like, 'It can't be that easy.'"

Heritage is busily doing that dirty work all over the country, notably in swing states like Georgia and Arizona. Meanwhile, the Democrats are counting on the federal government and the courts to mitigate the worst of the damage these bills are going to create.

This week Senator Joe Manchin, D-WV, threw cold water on the prospects for passage of the "For the People Act" the voting rights bill that just made it out of committee on a party-line vote. He fatuously insists that voter protection bills aren't legitimate if they aren't passed on a bipartisan basis which essentially means no vote protection bills can pass since the entire Republican Party is determined to prevent as many Democrats from voting as possible.

Still, Manchin did come out in favor of requiring "pre-clearance" of any changes to voting laws by the Justice Department in all 50 states which is actually more radical than any provision in the For the People Act or the John Lewis Voting Rights Advancement Act which is also in the hopper. The chances that he can get 10 Republicans on board, which is what it would take to break the filibuster, is nil but it appears he wants to try.

So we are still in that place of waiting to see if the inevitable betrayal by Manchin's GOP buddies will make him understand that the weapon of the filibuster is being used to destroy the country. I wouldn't get my hopes up.