Alphonse Bertillon and the troubling pursuit of human metrics

Bertillon’s notion of the "spoken portrait" demanded precise, detailed measurements of both body and face 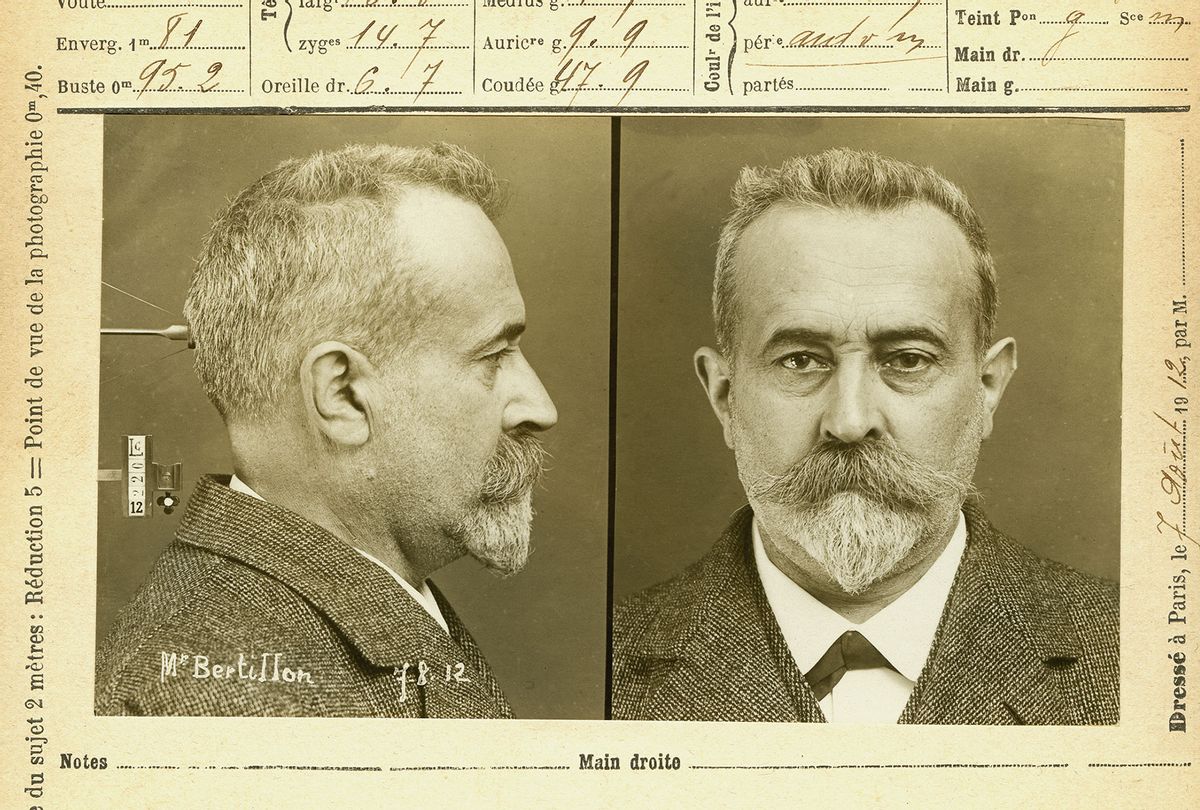 Alphonse Bertillon (1853-1914), French scholar, developed the criminal anthropometry. Self-portrait ID following his own methods made on August 7 1912, at the age of 59. (adoc-photos/Corbis via Getty Images)
--

Doris Abravaya stood just over five feet tall and weighed less than 100 pounds when she graduated from Manhattan Technical High School in 1933. Her time there was documented on a single oversized card, preprinted with basic data entry fields — school attendance logged in pencil, family facts registered in ink — alongside cryptic acronyms and earnest equations, matriculation dates, and at least seven different addresses. A tiny photo of an elfin Doris peeks out from the bottom of that card, her expression a dreamy mixture of romance and resignation. She looks little. She looks lost.

Cards like these bespeak a kind of generic authority, giving us little reason to question their veracity, yet question them we must. To begin with, she was not Doris but Dora, the second daughter of Josef (not Joseph) and Rebekah (not Rebecca), young Sephardic Jews who had emigrated to the United States together with their four children in the early years of the 20th century. They were not Spanish but Turkish: Josef's naturalization papers suggest he worked as a barber and a restaurateur (not, as this data would suggest, a lamp maker).

Rebekah's address (possibly her place of work, possibly her residence) is given as the Manhattan State Hospital, an establishment that had been previously known as the New York Asylum. At first glance, it might appear that Rebekah was employed there, but a closer read suggests that it was probably her home at the time. Further digging reveals a death notice, sometime in the 1950s, in Wingdale, New York. Until the early 1990s, this was home to a mental health facility of some renown and may well be where Rebekah spent her last years.

Confidentiality in general (and HIPAA laws in particular) prevent even the most conscientious researcher from sharing Rebekah's medical history, but it is possible, even likely, that her prolonged hospitalizations explain why Dora lived with her aunt, why she had two social workers, and why she missed 55 days of school in a single year. What is not mentioned is that Dora's older sister, Frida, likely lived under the jurisdiction of the Hebrew Sheltering Guardian Society: records show that Frida was sent to the convalescent home for Hebrew children, suggesting she may have been disabled. One can easily imagine that her father might have struggled to care for her as a single parent, especially with three younger children to support.

And what do we know of Dora herself? If we believe her given coordinates, she was born on June 12, 1915, on the same day — and in the same city — as David Rockefeller. Could their lives have been any more different, their destinies any more predetermined by the binary opposition of their initial, if accidental circumstances? And how do we even begin to measure that?

We are groomed, from an early age, to crave measurement. Notches on walls verify our height. Notes from doctors record our weight. We buy scales and diaries, save report cards and log achievements. As babies become toddlers become adolescents and adults, we take pictures — lots of pictures. Memories registered and milestones passed, we willingly share our data by way of a host of forms that cumulatively present, over a lifetime, as a kind of gold standard. On paper or online, they're our material witnesses, holding the temporal at bay.

Dora's material witness is typical of the sorts of records to which all of us are attached, official documents that connect faces to places, snapshots to statistics. Bureaucratic and perfunctory, we seldom stop to question the silent power of these documents, even as they transport our collective selves across time and space. Lacking nuance, devoid of emotion, they nevertheless confer a kind of keen graphic authority, begetting permission, enabling access, presupposing legitimacy, and anticipating a host of needs. Framed by the records that circumscribe that legitimacy — the records and diplomas, ID cards and passports and licenses — the playing field of difference is homogenized by numerical necessity, making all of us, in a sense, prisoners of the indexical.

The pursuit of human metrics has a rich and fascinating history, dating back to the ancient Greeks, who viewed proportion itself as a physical projection of the harmony of the universe. Idealized proportion was synonymous with beauty, a physical expression of divine benevolence. ("The good, of course, is always beautiful," wrote Plato, "and the beautiful never lacks proportion.") From Dürer to da Vinci, the notion that humans might aspire to a pure and balanced ideal would find expression in everything from the writings of Vitruvius to the gardens of Le Nôtre to the evolution of the humanist alphabet. To the degree that proportion itself was deemed closer to the divine when realized as an expression of balance and geometry, proportion had everything to do with mathematics in general (and the golden section in particular) and found its most profound expression in the realization of the human form.

While there is ample evidence to suggest that the urge to measure had its origins in ancient civilizations, the science of bodily measurement was not recognized as a proper professional pursuit until the 19th century. With the advent of industry and the pragmatic concerns with which it was associated — growth projections, profit motives, numerical evidence as approved metrics for evaluation — certain public institutions were perhaps uniquely sensitized to appreciate the value of quantitative data. Statistics as a field of mathematical inquiry gained traction as a discipline thanks in no small part to the scholarship of Sir Francis Galton, whose obsession with counting and measuring everything imaginable (but especially human beings) warrants mention here. His 1851 "Anthropometric Laboratory" — which was included in the International Health Exhibition held in London in 1885 — was an attempt to show the public how human characteristics could be both measured and recorded. Add to this the rise in photography as a promising new technology and the idea of capturing evidence via methodical efforts in data mining was an idea whose time had clearly come.

To measure was to apprehend and be made accountable, and nowhere was this more resonant than in the identification and classification of criminals, led by the efforts of one particularly dedicated officer in Paris at the end of the 19th century.

Alphonse Bertillon was the black sheep of his largely intellectual family, many of whom were physicians and statisticians. A weak student with a reputedly obstinate manner, he flunked out of school twice, and found only entry-level work in the Paris Police Station, following a singularly unimpressive tour in the army as a bugle player, at the relatively advanced age of 26. Unceremoniously relegated to the basement, where he was charged with the laborious process of hand-copying prisoners' admission forms, Bertillon soon began to notice a number of key discrepancies — in language, description, order, and detail — that caught his attention. There was too much reliance on eyewitness accounts, he believed, a poor organizational system, and a surprising scarcity of consistent input criteria. The idea that increasing rates of recidivism might bear a direct relationship to these ineffectual methods gave Bertillon cause for concern, and he set out to remedy what he perceived to be a deeply flawed system, one that failed to recognize, among other things, the specifics of facial discrepancy.

Bertillon understood that the study of evolutionary biology is based upon a careful examination of difference, noting in particular that difference itself is best understood (and ideally more accurate) when measured in a controlled environment. By reducing the variables and streamlining the input process itself, he wondered if there might not be a more effective system for identifying — and by conjecture, capturing — repeat criminals. Inspired by the writings of Adolphe Quetelet, a Belgian statistician who had introduced the concept, in 1835, of what he termed l'homme moyen (the average man) — a standard-bearer against which the general population might be effectively compared — the young Bertillon chose to devote himself to the study of more precise visual observation. His system, which would become known as Bertillonage, revolutionized the field of criminal justice and lay the groundwork for what would emerge as a more efficient method for criminal management. And, as it happened, a more teachable one.

If Quetelet's focus was on the average man, the Italian criminologist Cesare Lombroso focused on a more delinquent model. Born to a wealthy Jewish family in 1835 (the same year Quetelet published his principal work, "A Treatise of Man and the Development of His Faculties"), Lombroso was trained as a physician, and later became a professor of forensic medicine. (He published his own book on human delinquency in 1878.) Over time, Lombroso would come to be known for his staunch belief in biological determinism: notably, the supposition that mental illness was genetic, and that criminals were born, not made. A fervent believer in atavism, he was particularly drawn to the fine-tuned measurement of the skull as an indicator of the savage proclivities of man. (Thieves had small eyes, for example, and rapists could be identified by their big ears.) Lombroso's unconventional methods ultimately proved wildly inconsistent, his conclusions far more quixotic than reliable. Though popular in his day, his controversial doctrines were ultimately discounted as ineffectual, inappropriate, and prejudicial.

For his part, Bertillon's methodology was exacting, quantitative, and rigorous. He toured prisons, where he undertook measurements with calipers that allowed him to record his subjects with the utmost precision. ("Every measurement slowly reveals the workings of the criminal," Bertillon would later write. "Careful observation and patience will reveal the truth.") Head circumference and chin angle were more critical determinants than, for instance, a suspect's surname, and over time, Bertillon compiled what was, in essence, a comparatively early (and radically inventive) database in which data was searchable by the metrics themselves. (The unusually time-consuming nature of this type of work eventually obliged the young criminologist to seek assistance: he later hired a young female helper, and — once she proved her dedication by personally filling out more than 7,000 ID cards — he married her.)

By 1888, the Paris prefecture had created an identification bureau helmed by Bertillon. Within a few short years, he'd inaugurated an even more sophisticated system, which would become widely known as the portrait parlé — the speaking portrait. Parsed into descriptive sections with exhaustive notational criteria, the idea was that the face could be deconstructed by any intaking officer. In addition to racial determinants that included skin tone and hair color, Bertillon parsed the face itself into compartmentalized subsections allowing officers to log every possible mark, blemish, and visual detail. Such detailed analog input ultimately proved both time-consuming and inefficient, a slippery system for capturing the subtlety of facial variables. By the early 1900s, Bertillon's once-innovative system had begun to fail.

The desire to measure the face has continued to remain a critical function in law enforcement, albeit a controversial one. Today, an increasingly more adept and agile machine landscape has reframed the once-flawed act of analog human measurement. Algorithms now do the work for us, but algorithms can often be wrong. (Such bias in machine learning is often referred to as a "coded" gaze.) When leveraged against the intricacies of biology, humanity, and personhood, the mechanical application of statistical analysis can easily miss the mark. Like Dora, whose truncated biography so poorly represented who she truly was, such documents often favor the format over the content, missing the bigger and more complex story — a story that is, by its very nature, impossible to capture, let alone deliver, on an index card.

Jessica Helfand is a designer, artist, and writer. She is a cofounder of Design Observer and the author of numerous books on visual and cultural criticism, including "Face: A Visual Odyssey," from which this article is excerpted.