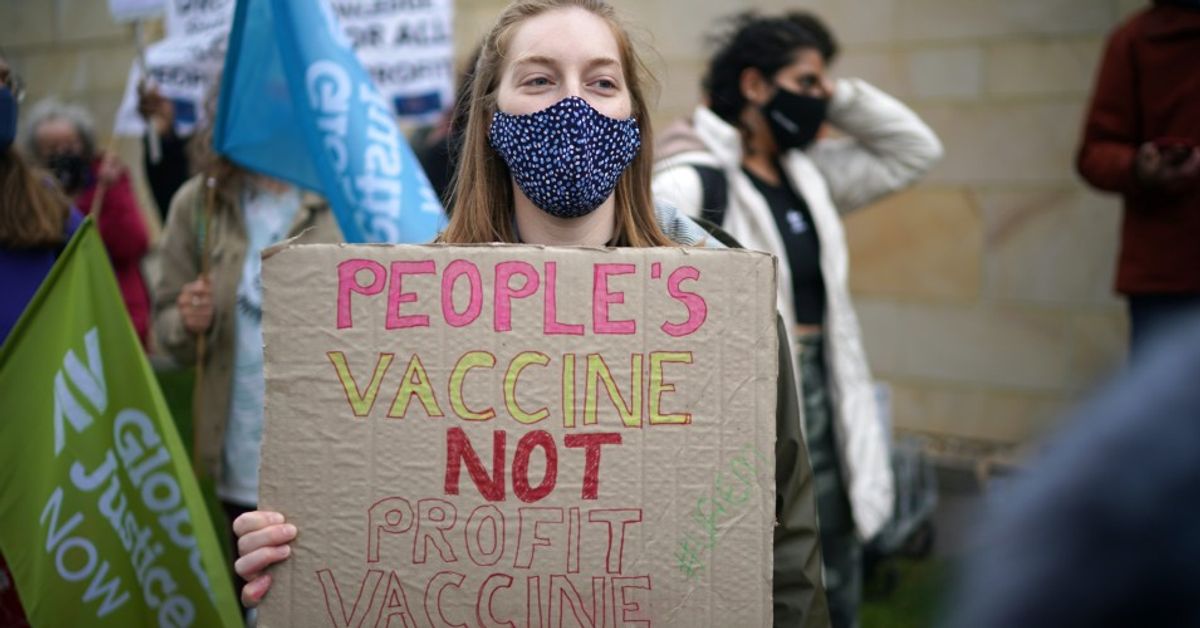 A member of the People's Vaccine, a public health advocacy campaign, protests outside an AstraZeneca site in Macclesfield, England, on May 11, 2021. The demonstrators called on the pharmaceutical giant to make the technology behind its COVID-19 vaccine free to the world. (Christopher Furlong/Getty Images)
--

While global health advocates applauded the Biden administration's recent decision to support waiving intellectual property protections for COVID-19 vaccines as "critical," "transformative" and "unquestionably the right thing to do," Big Pharma took a decidedly less optimistic view of the move and has been hard at work behind the scenes in a bid to thwart the policy, a report published Friday by The Intercept revealed.

In a bid to stymie U.S. support for a proposal by India and South Africa to enact a Trade-Related Aspects of Intellectual Property Rights (TRIPS) waiver at the World Trade Organization (WTO), the pharmaceutical industry is "distributing talking points, organizing opposition, and even collecting congressional signatures in an attempt to reverse President Joe Biden's support for worldwide access to generic Covid-19 vaccines," according to The Intercept's Lee Fang.

Fang obtained an email from Jared Michaud, a lobbyist with the Pharmaceutical Research and Manufacturers of America (PhRMA) — a trade group whose clients include vaccine developers AstraZeneca, Johnson & Johnson and Pfizer — describing how Big Pharma and sympathetic U.S. legislators are pushing lawmakers to oppose a TRIPS waiver.

The email explains that Reps. Buddy Carter, R-Ga., and Vern Buchanan, R-Fla., are leading an unreleased letter to Biden — which currently has 29 co-signers — "expressing concerns with the administration's support for waiving IP protections related to Covid-19 vaccines under the WTO TRIPS waiver."

"We urge you to contact offices and ask them to sign onto this letter," said Michaud's email.

The letter additionally claims that the TRIPS waiver would cost U.S. jobs and be a boon for China, which would "profit from our innovation."

Michaud's email contains talking points that paint the IP waiver as a national security threat that would "irreversibly damage American innovators" and the U.S. government's "strategic engagement," while a separate document marked "confidential" claims that "waiving intellectual property will undermine the global response to the pandemic and compromise vaccine safety."

According to Fang, "The metadata for the document shows that the PDF document was created by Megan Van Etten, an international public affairs specialist for PhRMA."

Fang notes that PhRMA spent $24 million on lobbying at the federal level last year "and is one of the biggest corporate players in election spending."

According to OpenSecrets, PhRMA has spent $8.7 million on lobbying so far this year. This, as client Pfizer has raked in $3.5 billion in profits from the sale of its COVID-19 vaccine in just the first three months of 2021.

"The group has long shaped drug policy not only domestically but also in the international arena," writes Fang. "PhRMA led the push in the late 1990s to pressure South African President Nelson Mandela to drop efforts to break patent laws and allow for the importation and manufacture of generic HIV/AIDS medications, which at the time cost an annual $10,000-$15,000 per patient."

Progressive U.S. lawmakers have taken Big Pharma and its lobbyists to task for their opposition to COVID-19 vaccine patent waivers.

"Amid a global pandemic, major pharmaceutical companies are lobbying to protect billions in profits," Sen. Bernie Sanders, I-Vt., said in March following the U.S. Chamber of Commerce's dismissal of the proposed TRIPS waiver as "misguided."