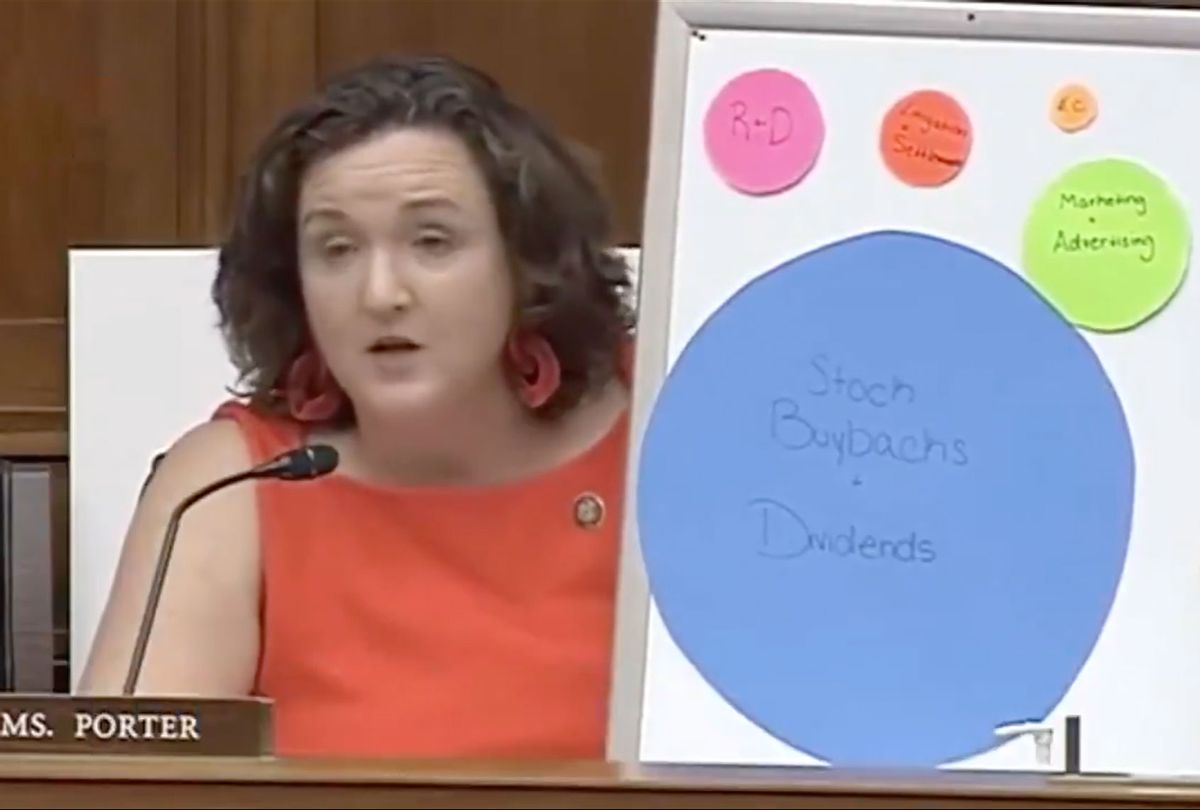 Gonzalez, whose compensation hovered just north of $24 million last year, was taken to task by Porter for hiking Humira, a drug used to treat autoimmune illnesses like Crohn's and rheumatoid arthritis, by over 470% since 2003. In the past, AbbieVie has rationalized the hike by saying that it covers the cost of new research and development. However, Porter pointed out that, in 2018, the company spent $4.7 billion on marketing and advertising, just under double what it spent on research and development. Porter also castigated the company for spending $50 billion on stock buybacks and dividends, a move that has earned a reputation amongst corporate critics for a money-grab.

When Porter questioned Gonzalez on how much the company spent in executive compensation from 2013-2018, the CEO speculated "about $60 million a year."

"So Mr. Gonzalez, you're spending all this money to make sure you make money, rather than spending money to invest in, develop drugs and help patients with affordable, life-saving drugs," Porter said. "You lie to patients when you charge them twice as much for an unimproved drug and then you lie to policymakers when you tell us that R&D justifies those price increases."

She added: "The Big Pharma fairytale is one of groundbreaking R&D that justifies astronomical prices, but the pharma reality is that you spend most of your company's money making money for yourself and your shareholders. The fact [is] that you're not honest about that with patients and policymakers—that you're feeding us lies that we must pay astronomical prices to get 'innovative' treatments. The American people, the patients, deserve so much better."

In a report released on Tuesday, the House Oversight and Reform Committee found that billions in revenue stemming from AbbVie drug price increases went to the company's top executives. "AbbVie pursued a variety of tactics to increase drug sales while raising prices for Americans, including exploiting the patent system to extend its market monopoly, abusing orphan drug protections to further block competition, and engaging in anticompetitive pricing practices," the report explains.

Last year, on Humira sales alone, AbbVie made nearly $20 billion, making it one of the most lucrative drugs in the world. One yearly supply of the drug can cost upwards of $84,000. There is no cheaper generic drug for Humira that is currently on the market.

In the past, AbbVie has been accused of "patent thicketing," where companies win patents that give them an exclusive market for a drug, shutting out others that might be able to replicate it at a lower cost. "Biosimilars have so much to offer for America's patients, but the potential savings that they can bring is being squashed by burdensome patent thickets in the name of profits," Christine Simmon, senior vice president at the Biosimilars Council, told the Washington Post last year. "Patent thicketing, and Humira is the poster child for this, builds a patent fortress around their product to protect their ability to continue their monopoly pricing.''

Because AbbVie faces little to no competition in their market niche, the company is able to raise the price of their drugs without facing financial consequences, forcing immunocompromised patients to choose between their health and their financial livelihood.