A nourishing soup to heal the cracks 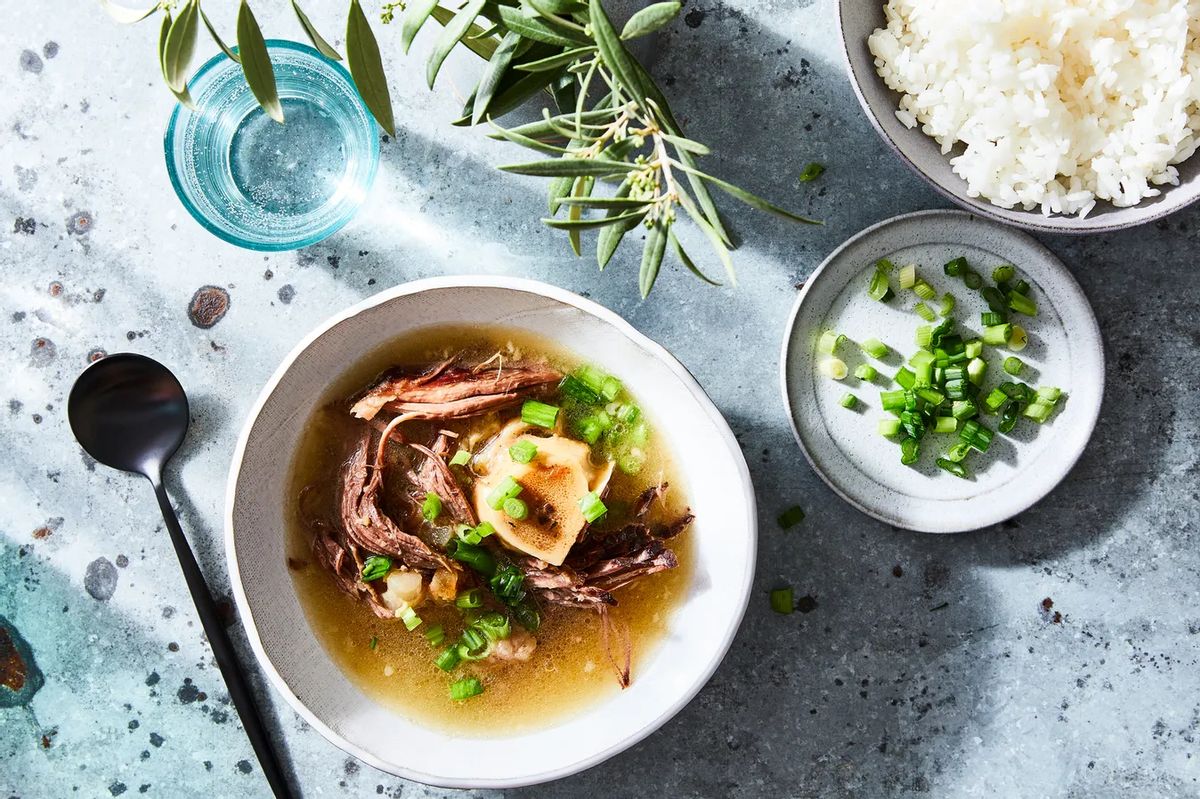 Back in April of last year — when ambulance sirens screamed hourly of yet another coronavirus casualty in a climate fraught with PPE shortages and simmering with racism against Asian Americans — my Korean immigrant mom headed to work the COVID-19 shift every day at Manhattan's VA hospital.

Soon, she, too, began having trouble breathing.

Slammed with the terror of ventilator scarcity, I reached for what always brought me comfort on sick days: my mom's gomtang (beef bone soup). It had gotten me through body aches so deep even my skin hurt, throats so inflamed only the hot, unctuous broth could soothe it. But this time — for the first time — I was making it for her.

As parents and children age, the caregiver and care-beneficiary roles eventually reverse. That inflection point, precipitated by a pandemic made even scarier by the growing number of attacks against Asian Americans, happened that April in my family. And one chilly night, I found myself wrist-deep in blood and water, asking myself: How do I care for my mom? Am I ready for this new path? Do I forgive old sins?

I filled two ceramic bowls with water, jostled the beef marrow bones out of their plastic bag into one, and planted the three-pound hunk of chuck roast into the other. The bones were hard.

My mom always began her soups that way. Bowls of bones and meat, swirling red, were common fixtures in our kitchen. It ensures a cleaner taste, she'd advise, guiding me to cook healthy, delicious Korean food for myself once I eagerly left my parents' house.

Dipping back into her cooking wisdom, I Tetris'ed all the pieces — smooth, oblong segments of femur bone, cut crosswise every inch or two — so they'd stay immersed in the water. They revealed gelatinous, beige bone marrow at the center, a richness of collagen, omega-3s, and vitamin A.

Am I doing this right?

My mom learned to make gomtang from her mother, who was, in turn, taught by her mother. It is a recipe that embodies generations of love and decades of nurture. My mom would snap to make it every time I shivered with the flu or the family sniffled and sneezed during cold winter months. Now, here was my 67-year-old mother with a cough, chest pain, and sore limbs after having been exposed to a deadly virus so new at the time that even medical experts struggled to understand how to treat or contain it. What I did know: 80% of deaths occurred among those 60 years of age and older, and the COVID-19 case count in NYC was exploding.

Another ambulance blared outside.

So am I cooking this right? No matter. Nutrition overrides perfection.

Onto the next step. I chopped the onion, scallion, and radish, their incense unfolding into a kitchen already teeming with ruminations. How do I care for the rock of the family? A mother who worked two, no, three jobs around the clock my whole life to raise a growing family; survived a robbery on her way to the hospital in the dark of dawn to earn money for the family in late-'80s Flushing; took care of a husband who'd been stabbed by robbers at their gold jewelry store in early-'80s Chicago and bore the unresolved anger of a Vietnam War veteran fighting for a foothold in America. My less-than-perfect grades and his struggles to support a family at the store, which later relocated to East Harlem, provoked red-hot anger, and she often stood by him, fearfully caressing the craggy edges of their shared American dream, difficult and violent. Her caregiving, while backbreaking, was flawed. But the perfect parts spooled through every hot, savory meal she would cook for us on days of laughter and nights of tears.

I shattered a clove of garlic. My eyes teared up.

In March, a photo of nurses improvising PPE out of Hefty bags made its rounds on social media, and our then-president tweeted the term "Chinese virus," giving license to racists across the country to attack Asian Americans. It was the latest chapter in our country's history of anti-Asian discrimination, which, politically, instigated the Chinese Exclusion Act of 1882 and the Japanese internment camps of World War II, and culturally, has kept us virtually invisible in films, TV shows, and commercials.

I took stock of the ingredients on my chopping board. I'd smashed through a whole head of garlic. The smell pierced the air.

Until her first symptoms, my mom, not even trained on the proper disinfection for the reuse of her N95 mask, was going to work every day. She was risking her life to save U.S. veterans in the epicenter of the pandemic, even as bigoted idiots full of disrespect blamed her for the virus. At that time, the CDC was flip-flopping on mask use; media companies stopped short of reporting on anti-Asian attacks; and the president continued to spread a hateful narrative, unwilling to protect our borders from a virus.

The ground fell out from under us, but no matter our layered past, I was going to catch my mom. It was my turn to care for her.

I returned to the bones. They were still hard. But I was even harder, fortified by my singular resolve to beat the virus that had invaded my mom's body. I rinsed the bones and beef, and pressure-cooked all the ingredients in my Instant Pot for two hours. The beef had to be so tender that my soup ladle would cut through it and my mom could delight in the softness of the meat, the tastiness of the broth—even though it wouldn't match up to her perfection — and the immune-system-boosting powers of a soup she had cooked for me for decades. That night, my husband dropped off the gomtang at her doorstep.

Now, a year later, my mom has received her vaccine, having survived the virus after weeks of illness. And in January, our new president signed an executive order denouncing anti-Asian discrimination. But then, on March 16 — after a year that sustained 3,800 hate incidents, according to reporting forum AAPI Hate (compared to roughy 100 incidents annually in previous years)—the entire nation was forced to reckon with the wave of racist violence, primarily perpetrated against women and the elderly, that the Asian American community had been painfully following over the course of the year. On that tragic day, a gunman in Atlanta murdered eight people, including six Asian American women, four of whom were Korean like my mom, my grandma, my aunt, my sister, myself.

On a recent visit from my mom, I handed her a batch of miyeokguk (a superfood seaweed soup) with a side of safety tips. "Be wary." "Stay away from weird people." "Carry hair spray." "Scream loudly."

This is the world we inhabit now, where daughters must protect their mothers.

I look back on that brisk April night a year ago. Disquieted by the strangeness of a break from our complicated past and riddled with worries that I hadn't yet perfected her gomtang recipe, I still made good on my promise to take care of her. Calamities like the ones we confront today can rattle family dynamics, prematurely turning the roles of the protector and the vulnerable upside down. As I soak beef to make another batch of bone soup for my mom, I'm reminded in more ways than one that blood is thicker than water.