“I was like, 'But we're not actually doing waterboarding.' And they were like, 'No, no, no, we are'" 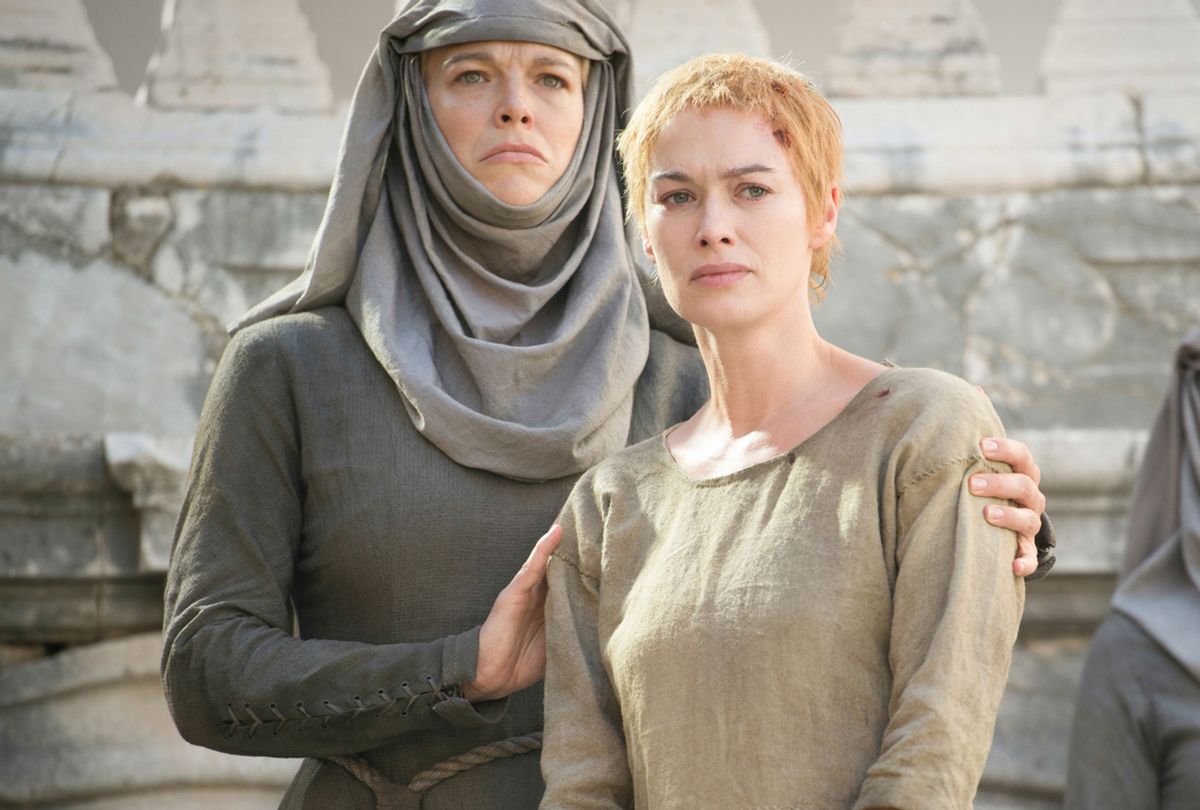 Hannah Waddingham and Lena Headey on "Game Of Thrones" (HBO/Macall B. Polay)
--

Two years after its series finale outraged fans around the world, HBO's controversial epic fantasy series "Game of Thrones" has become even more controversial. In a new interview with Collider Ladies Night, Hannah Waddington, who played the fanatical religious zealot Septa Unella, said she was "waterboarded" for 10 hours for one particularly gratuitous torture scene at the end of Season 6.

In the scene in question, Unella is attacked, tortured and killed by Gregor Clegane, played by Ian Whyte. Waddington said that on top of this, Clegane was also initially written as raping Unella, before a last-minute change.

"I think they'd had so many complaints about the rape of Sansa [Sophie Turner] that they chose not to go with it," Waddington said. "Unbelievably, they changed it quite at the last minute. I think they possibly changed it when I was mid-air flying to Belfast because suddenly I got sent these new sides that said I would need a wetsuit top."

Waddington also described her shock when she said the production team informed her on set she would actually be waterboarded for the scene. "I was like, 'But we're not actually doing waterboarding.' And they were like, 'No, no, no, we are,'" she recounted, adding that "other than childbirth, [it] was the worst day of my life."

After filming the scene, Waddington described being traumatized. "It definitely gave me claustrophobia around water," she said. "It's quite full on being waterboarded for 10 hours — and then, for only one minute and 37 seconds to be used on camera."

She added that immediately after filming, she already felt "bruises coming up."

"I didn't want the strap tight around my neck, but as they pointed out if the camera can see you lifting your head up to save yourself, that's not authentic," she said. "As ["Game of Thrones" co-creator] Dan Weiss pointed out, he came up and said, 'Look, in the script it says Cersei empties the remainder of her glass of red wine to wake up Unella. People aren't going to think that's enough. That is not enough retribution for Cersei.'"

She added, "The one thing I kept thinking to myself was the production company aren't going to let you die, so get on with it, be uncomfortable."

HBO has yet to comment on Waddington's interview, but her disturbing revelation about the extreme discomfort and torture she experienced filming "Game of Thrones" comes after Emilia Clarke, who played Daenerys Targaryen, recounts almost dying while filming Season 2 of the series.

From the cruelty inflicted on Waddington's Unella, to the sexual shaming to which Unella subjected Lena Headey's Cersei Lannister, "Game of Thrones" became notorious for its extensive, graphic and dehumanizing depictions of violence against women and girls.

In addition to the aforementioned scenes, before the show writers finally responded to criticism and expressed openness to making changes in 2017, the show had featured the violent rape of Turner's Sansa Stark, Kerry Ingram's Shireen Baratheon — a child — being burnt at the stake, and other unnecessary scenes featuring sexual violence inflicted on women and girls. George R.R. Martin, author of the book series "Game of Thrones" is based on, has often defended this violence as necessary to be true to history, as if dragons, sorcery, and reanimating the dead are less of a liberty in a fictional universe than treating female characters as human beings.