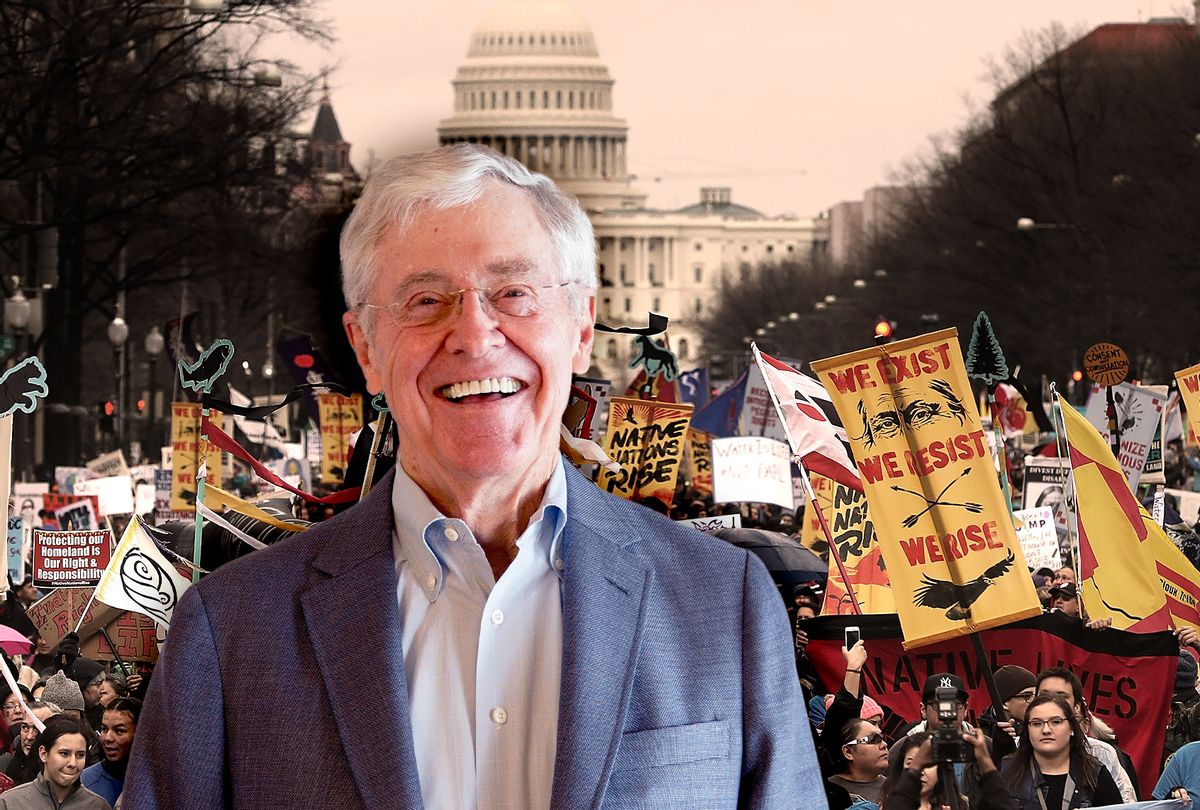 Charles Koch | Protesters march during a demonstration against the Dakota Access Pipeline on March 10, 2017 in Washington, DC. (Photo illustration by Salon/Getty Images)
--

In 1995, when the Koch Petroleum Group was indicted by a federal grand jury on 97 felony charges for alleged environmental crimes at one of its Texas oil refineries, Charles and David Koch, the famous billionaire investors and political donors, had a seeming crisis of conscience. "It was a really, really torturous experience," explained Mark Holden, Koch's chief counsel, years later. "We learned first-hand what happens when anyone gets into the criminal justice system." After enduring that "torturous" experience, Holden said, Charles Koch grew very worried about "how the little guy, who doesn't have Koch's resources, deals with prosecutions like that."

As far-fetched as this may seem, Charles Koch has been driven by that concern ever since — at least to some degree. (His younger brother David, who was less engaged with these issues, died in 2019.) Along with supporting typical conservative or libertarian causes like lower taxes and deregulation, Koch has also fought for reform in both civil asset forfeiture and mandatory minimum sentencing. He has supported prison programming and expanded visitation. More recently, the Koch lobby has pushed for marijuana legalization, partnering with numerous civil liberties organizations normally identified with the left, like Drug Policy Alliance and the National Organization for the Reform of Marijuana Laws, to decriminalize nonviolent drug offenses.

In keeping with his broader libertarian agenda of promoting individual freedom and limiting state power, Charles Koch has a demonstrable record of fighting to keep people out of prison. Except, that is, in one particular area. When it comes to nonviolent protests against Koch-affiliated businesses — especially when valuable private property, aka "critical infrastructure," might be at risk — he's far less interested in limiting the reach of law enforcement or the carceral authority of the state, and has supported a nationwide wave of legislation aimed at criminalizing the Koch companies' fiercest critics.

According to an extensive Greenpeace report published in May, Koch Industries ranks among the largest donors to elected officials who sponsored anti-protest bills between last June and this March. Koch's donations — totaling at least $151,050 — haven't gone just to politicians who have sponsored measures to criminalize protests that supposedly threaten "critical infrastructure." The money has also flowed to those who have backed bills seeking to suppress all kinds of protest, even when defined in broad and sweeping terms, with significant criminal penalties attached.

Over the past several years, environmental advocates have pointed out the apparent contradictions between Charles Koch's criminal justice platform and his support of anti-protest bills throughout the country.

"Koch Industries talks on both sides of their mouth on this issue of protests," Folabi Olagbaju, Greenpeace USA's democracy campaign director, told Salon in an interview. "On one hand, they're spending tens of millions of dollars to advance criminal justice reform. On the other hand, they are also pushing laws that further criminalize people who protest — and we're talking about Black, brown and poor people."

Take, for instance, Oklahoma, where Koch hosted a panel in 2016 addressing the state's excessive prison population. During the 2020 election cycle, Koch Industries donated at least $6,000 to the sponsors of H.B. 1674, according to the National Institute on Money in Politics. That bill, enacted in April, makes participating in a "riot" a felony punishable by up to 10 years in prison, and also grants civil and criminal immunity to motorists who accidentally kill someone with their vehicle, if the motorists are "fleeing from a riot" and "exercise due care at the time of death."

Koch Industries has also donated thousands of dollars to the sponsors of "critical infrastructure" bills, as mentioned above, which specifically prohibit demonstrators from trespassing on or tampering with "critical" company property.

In Kansas, where Koch Industries pushed for a law that prohibited the state from asking job applicants about their criminal record, the company donated a total of $7,000 to various sponsors of S.B. 172, which made entering a "critical infrastructure" facility a misdemeanor punishable by up to a year in prison. The measure also made trespassing with the intent to "tamper with" critical infrastructure a felony punishable by up to two years in prison.

In 2019, Koch Industries also contributed a total of $1,300 to sponsors of a Mississippi law in the same vein. That measure, H.B. 1243, which enacted last July of last year, makes "impeding critical infrastructure" a felony with a potential seven-year sentence if the action causes "damage or economic loss" amounting to $1,000 or more. That law also carries some excess verbiage that turns simple trespassing into a misdemeanor offense with a possible one-year sentence.

It's no mystery what produced this abrupt wave of "critical infrastructure" bills: the Dakota Access Pipeline protests of 2016. Native American protesters and their allies from around the world staged a long-term occupation on energy company property in western North Dakota in an effort to block pipeline construction on tribal lands, arguing among other things that the pipeline would pollute the region's water sources.

When construction workers bulldozed what Native Americans deemed to be sacred ground that September, protesters physically intervened, prompting security workers to release attack dogs. At one point, police targeted protesters with water cannons in freezing temperatures. That conflict spanned 10 months and ended with one person dead, 300 injured and more than 487 arrested. The following year, North Dakota enacted a spate of anti-protest bills designed to inflict harsh criminal penalties on anyone who threatened or damaged "critical infrastructure."

While Koch Industries has been instrumental in pushing these bills through state legislatures, it has also played a key role in drafting them. That happens largely through Koch's relationship with the semi-notorious American Legislative Exchange Council, or ALEC, an immensely well-connected conservative policy organization known for drafting mock bills as models for real-world legislators.

Sometimes described as a "corporate bill mill," ALEC demands impressive fees from its member companies, which are increased if a company wants to play a direct role in writing proposed laws. The Koch network has used ALEC, by many accounts, as a private legislative incubator, where state lawmakers and company lobbyists can collaborate in drafting bills — including this new wave of critical infrastructure laws — meant to boost the firm's bottom line.

"There is no other company or corporate CEO who is as well-represented at ALEC as Charles Koch," Connor Gibson, an opposition researcher, told Salon in an interview. "Koch always seems to be in the room."

Michael Morgan, a top lobbyist for Koch Industries, sits on ALEC's Private Enterprise Advisory Council, which "promote[s] the principles of limited government, free markets and federalism with real-world business experience." According to a Documented report from 2018, Koch Companies Public Sector, the Charles G. Koch Charitable Foundation, and various other Koch-funded groups — including American Energy Alliance and Americans for Tax Reform — sit on ALEC's Energy, Environment, and Agriculture Task Force, which promotes "principles of free-market environmentalism." In 2017, 52 Koch-affiliated staff attended ALEC's annual meeting in Denver, according to a roster obtained by Documented. Two years later, 68 Koch affiliates attended ALEC's annual meeting in Austin. From 1997 to 2019, ALEC received at least $3.8 million from various Koch-affiliated foundations, according to public records reviewed by KochDocs.

In addition to financing the sponsors of critical infrastructure laws — and helping author the laws — Koch entities have also directly lobbied state governments to get them passed.

According to Iowa records, in 2018, the Kochs lobbied for the passage of H.S.B. 603, which would have assigned severe criminal penalties to "critical infrastructure sabotage," defined in remarkably vague terms as "any unauthorized act that is intended to or does in fact cause substantial interruption or impairment of service." Whatever that may describe, it would have become a felony punishable by up to 25 years in prison and a $100,000 fine. (That bill died in the legislative chamber, perhaps because its terms were so imprecise.)

The Koch network lobbied for Texas' H.B. 3557 in 2019. Under that bill, an individual who "enters or remains on or in a critical infrastructure facility and intentionally or knowingly impairs or interrupts the operation of the facility" could face felony charges and prison time. Two of its sponsors, state Sen. Brian Birdwell and state Rep. Chris Paddie, both Republicans, are ALEC-affiliated legislators, according to the Center for Media and Democracy. Campaign finance records show that Koch Industries donated at least $4,000 to the bill's sponsors during the 2020 election cycle.

The Koch network can pull legislative strings in ways that are more difficult to documented. As Gibson put it, "Koch is the company that is very, very frequently one step removed in states where it wasn't directly lobbying" for such bills.

One way to accomplish that is by placing representatives on industry trade groups that then advocate for policies the company favors. Consider Francis Murphy, who sits on the board of directors at American Fuel & Petrochemical Manufacturers (AFPM), a huge oil and gas trade association that spends tens of millions of dollars to defeat environmental regulations. Murphy is also senior vice president of chemicals at Flint Hills Resources, a Koch Industries subsidiary.

Jeff Culver, who is senior counsel for transportation and security at Koch, chairs AFPM's Security Committee, which provides "a forum for the exchange of information among the membership on security-related issues within the petroleum refining and petrochemical manufacturing industries." Koch and Flint Hills affiliates sit on a variety of other committees in the AFPM.

In 2019, the Intercept acquired a leaked recording of an AFPM event, in which the group "concedes that it has been playing a role behind the scenes in crafting laws recently passed in states across the country to criminalize oil and gas pipeline protests, in response to protests over the Dakota Access pipeline."

Attendees at that event were reportedly given copies of an anti-protest template bill drafted by ALEC called the "Critical Infrastructure Protection Act." When the bill was later disseminated to hundreds of ALEC-affiliated state legislators, it came with the formal endorsement of AFPM.

Salon asked three Koch Industries employees whether they thought the company's support of critical infrastructure bills contradicted the Koch networks' oft-stated commitment to criminal justice reform. Two of them did not respond. The third repeated a statement attributed to David Dziok, the Koch director of communications, who said these new bills that redefine and criminalize nonviolent protest actions "are necessary – not only for the safety of the communities in which we operate, but also for the safety of those exercising their rights to demonstrate."

Environmental activists might well respond that Koch's business operations — which have polluted many areas of the United States over a period of decades — pose a threat to public safety all by themselves. In the past, Koch companies have dumped millions of gallons of toxic chemicals into ponds, streams, lakes and coastal waters and emitted immense amounts of greenhouse gases into the atmosphere, while officially either denying the existence of climate change or seeking to underplay its effects.

"They are not trying to protect people's right to protest," Olagbaju said. "They are trying to stifle dissent."