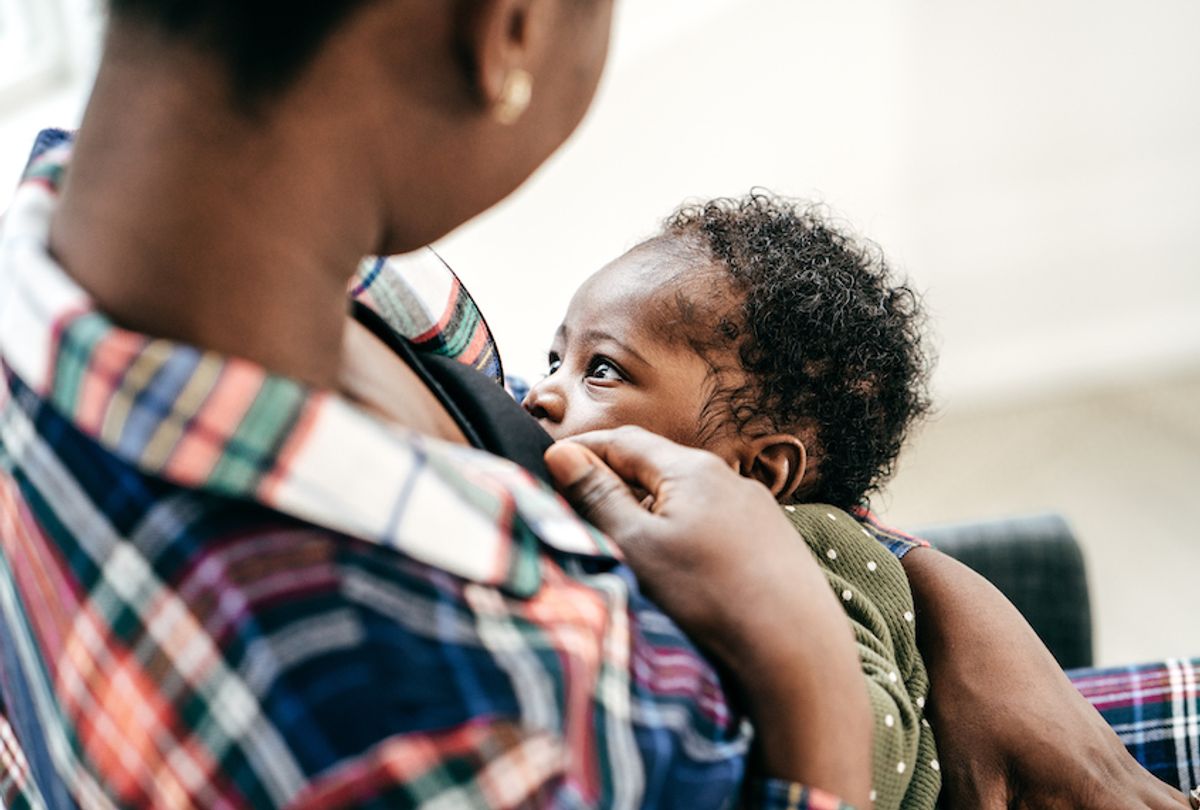 When Amanda Green had a baby in 2015, she had no idea how hard it would be to feed him. After struggling to breastfeed for months and attending numerous appointments with lactation consultants and her pediatrician, the experts suggested that her son could have a condition called posterior tongue-tie, which might make it difficult for him to feed. They referred Green to a pediatric dentist, who made a painful slice with a laser under her 3-month-old's tongue.

It didn't help the baby to breastfeed. And now, five years later, her son has speech problems that the procedure was also supposed to prevent. Green says she wonders whether or not it was worth it.

Tongue-tie, or ankyloglossia, is caused by tissue that restricts tongue movement and is often blamed for breastfeeding struggles. According to several studies, tongue-tie occurs in 4 to 11 percent of newborns, but there has been a dramatic rise in corrective procedures — one study indicated a 10-fold increase between 1997 and 2012. According to some experts, this is partly due to the growing pressure to breastfeed. But the procedures are also increasing because the definition of tongue-tie broadened during that time. The exact number of procedures each year is impossible to know, since they mainly occur in private practices, but there are tens of thousands performed each year in hospitals alone.

Traditionally, ankyloglossia was easily diagnosed as a thin, translucent membrane that restricts the movement of the front of the tongue and draws it into a heart shape. Surgical textbooks as far back as 1679 showed how to snip this tiny bit of tissue. Then, in 2004, a new kind of tongue-tie was brought to the clinical mainstream in an opinion published in a physician's newsletter — a hidden, or posterior, tongue-tie, which is "difficult to visualize," the opinion piece says, and requires a revision procedure that some experts say can be more invasive. The procedure can also be lucrative for providers.

Since then, books, websites, testimonial videos, Facebook groups (the largest of which has more than 85,000 members), and some health care providers have contributed to the idea that tongue-ties are associated with long lists of issues — and that the condition requires medical intervention. These proponents of tongue-tie surgeries say that the thick band of tissue in front of the tongue muscle, if left intact, can not only interfere with breastfeeding, but also may cause speech difficulties or dental issues down the line. While many experts believe a classic, anterior, tongue-tie might make it harder to breastfeed, remove food stuck around teeth, or say certain sounds, there is considerable disagreement — and little evidence — about whether posterior tongue-ties cause such problems. And there is even less science supporting other claims, which link tongue-ties to poor facial growth, difficulty sleeping, hyperactivity, mouth breathing, neck tension, and picky eating. Still other sources, including some naturopaths and pediatric dentists, link a common gene variation with tongue-tie, without any evidence, giving the false impression that the condition is pathological.

"There's a lot of controversy and very little study on whether posterior tongue-tie is even a legitimate diagnosis," says Karthik Balakrishnan, a professor and physician of otolaryngology-head and neck surgery at Stanford University, "much less whether it affects tongue function or breastfeeding."

But many experts argue that this tissue, called a frenulum, is part of people's normal physiology — not something that needs to be cut. Whether tongue-tie is considered a problem for breastfeeding can depend on the provider — a survey from 2000 indicated only about 6 percent of pediatricians believe it frequently causes feeding issues compared to 69 percent of lactation consultants. And the procedure comes with risks including accidentally severing the nerves that carry sensations from the front of the tongue, as well as infection, says Pamela Douglas, a University of Queensland scientist who studies breastfeeding difficulties.

Balakrishnan says with a classic tongue-tie he prefers to cut the thin membrane under the tongue, but that it's difficult to know what to do when an infant is diagnosed with a hidden tongue-tie. Although he acknowledges the lack of scientific evidence surrounding hidden tongue-ties, depending on the circumstances he will do the procedure, maintaining that it is low risk. For instance, if a baby is experiencing breastfeeding difficulties and their nursing parent has been working with a lactation consultant, but isn't seeing improvement, Balakrishnan will cut a posterior tongue-tie. However, because the evidence is lacking, he warns such parents, "there's a significant risk that it will make no difference at all in breastfeeding."

Providers typically treat both classic and hidden tongue with either scissors or a laser. The advantage of the laser procedure is that there is no bleeding, says Anna Messner, an otolaryngology-head and neck surgery physician at Texas Children's Hospital and professor at Baylor College of Medicine. But Messner also uses scissors for tongue-tie corrections, and says the heat from the laser, which can extend beyond the cut site, may increase the risk of nerve damage. While Balakrishnan does use a laser for certain procedures, he avoids it for tongue-tie revisions, because he says that laser cutting generally takes longer to heal and causes more pain. But, Balakrishnan says, there isn't enough evidence to say one approach is better and Lynn says some types of lasers offer less risk than others.

Lasers are also expensive, and Balakrishnan wonders whether the investment might make providers more likely to use them. Tongue-tie revisions can be lucrative, according to Douglas. Pediatric dentists, whose procedures often aren't covered by insurance, charge between $500 and $900 for a tongue-tie revision. "I don't think we can completely ignore the financial incentive that many of these practices have," Messner says. Balakrishnan points out the American fee-for-service model can influence physicians, too. In Canada, which has universal health care, the Canadian Pediatric Society wrote in a position statement that "most of the time, ankyloglossia is an anatomical finding without significant consequences for infants." Though in Canada, the tongue-tie procedure rate is also increasing.

Underlying the lack of expert consensus on tongue-tie — and its treatment — is a lack of research. There aren't many relevant studies, and those that exist include small numbers of patients and self-reports, which make the results more uncertain. Most of the studies don't distinguish between the types of tongue-ties, muddying their interpretation further. Even if studies did have all the relevant information, they still may not show a clear link between tongue-tie revisions and better breastfeeding. Sometimes it takes several weeks for breastfeeding to improve in an infant who has a tongue-tie surgery. Messner points out that improvement in breastfeeding may not have anything to do with the procedure; in many cases, breastfeeding simply becomes easier over time.

Some practitioners disagree. Lynn, for instance, says that it may take a while for breastfeeding to improve after a surgery because the tongue-tie caused the infant to "learn bad habits," which, he adds, takes time to resolve. While Lynn says he commonly sees infants with breastfeeding issues, he also treats children with tongue-ties that he associates with problems in sleep, feeding, and speech.

But there is no solid data that tongue-tie is associated with poor sleep or picky eating, says Balakrishnan, although that there also isn't enough evidence to rule out a connection. For speech delay, Messner says that while some parents might think that a tongue-tie is preventing their child from saying certain sounds, it's normal for children to be unable to make all sounds until they turn six.

Based on the available research, the one area where tongue-tie procedures may make a difference is improving a breastfeeding parent's discomfort, although the evidence is still just "a little bit convincing," says Balakrishnan. But even if tongue-tie revisions reduce nipple pain in the short term, it's not clear whether these procedures are necessary, or whether other interventions could help. In 2019, a study in the journal JAMA Otolaryngology-Head & Neck Surgery showed that parents who had been referred for tongue-tie revision and had been offered a consultation to improve breastfeeding typically opted out of the surgery. And a 2018 study from New Zealand showed similar results: A program to provide breastfeeding support reduced tongue-tie revision rates without changing breastfeeding rates.

The most definitive way to unpack whether the surgeries lead to positive outcomes, Balakrishnan adds, would be a study that randomly assigns babies with posterior tongue-tie to either have it revised, or not, and follows them for years to track breastfeeding, speech, sleep, and the other things blamed on the condition. But "nobody has done that study," he says, "and probably nobody will."

Despite the lack of evidence, parents are increasingly seeking out tongue-tie surgery, fueled in part by social media, says Messner. New parents who join large Facebook group dedicated to tongue-tie often post pictures of their babies' tongues and ask the group whether a child has the condition, sometimes after feeling dismissed by a pediatrician. Responses often direct the parent to a regional tongue-tie Facebook group, which provide references to what the group members call "tongue-tie savvy" providers, often pediatric dentists who specialize in tongue-tie revisions. Messner calls the process "a loop that feeds into itself."

Behind the social media groups is a strong desire to breastfeed. That desire is backed, in part, by research; Douglas points to a decades-long focus on the value of human milk for babies. But there hasn't been the same focus, she adds, when it comes to the "care of mothers and babies," which has led to a dearth in evidence-based practices to help people with breastfeeding problems. According to Douglas, research from her lab and others indicates that current theories about how babies suckle are inaccurate; these misconceptions, she says, may be contributing to the rise in tongue-tie diagnoses. There are likely other issues causing breastfeeding pain, she adds, for instance when babies aren't positioned well or don't latch quite right, which can damage the breast tissue and cause pain.

The fundamental problem with tongue-tie is the disagreement on both diagnosis and treatment. "Overdiagnosis is a genuine concern, and unnecessary surgery is a genuine concern," says Balakrishnan. "But the problem is that there's not consensus on what's unnecessary, and what's overdiagnosis." This puts parents in an awkward position, he adds, because "it's like the Wild West. The parents and providers are really on their own trying to figure it out, hopefully working with each other, but without a lot of guidance."

Even one of the authors of the 2004 opinion that introduced posterior tongue-ties to the medical community thinks the condition is overdiagnosed. Catherine Watson Genna, an international board certified lactation consultant, draws a parallel to tonsillectomies. "In my generation we all had our tonsils out. If you still had tonsils by age six, you were an outlier," she says. "And then, the pendulum swung. And for a while they weren't taking anyone's out. Now they're just really judicious. So I think the same thing will happen with tongue-tie."

Like tonsils, everyone has a frenulum. Messner believes only a minority need to be cut. The focus on tongue-tie, she adds, distracts from what could be a serious issue that can cause poor breastfeeding in babies, like a heart condition. But Balakrishnan finds that many parents who struggle with breastfeeding have already made up their minds to have the procedure done. After ruling out other causes for their problems, he usually does it, he says, because "it's a pretty straightforward thing to do. It's generally a safe thing to do with relatively low risk."

When Green's second child was born, she experienced the same problems nursing as she did with her first. Her pediatrician said that tongue-tie could be the problem, but Green ultimately decided not to have her younger child's tongue-tie revised. For the pain she experienced while breastfeeding both her children, Green says, "there just wasn't a solution."

Christina Szalinski is a freelance science writer with a Ph.D. in cell biology based near Philadelphia.