As neighborhood watch apps ascend, so do the threats they pose

Billed as public safety platforms, these apps are poised to funnel collective anxiety into something more nefarious 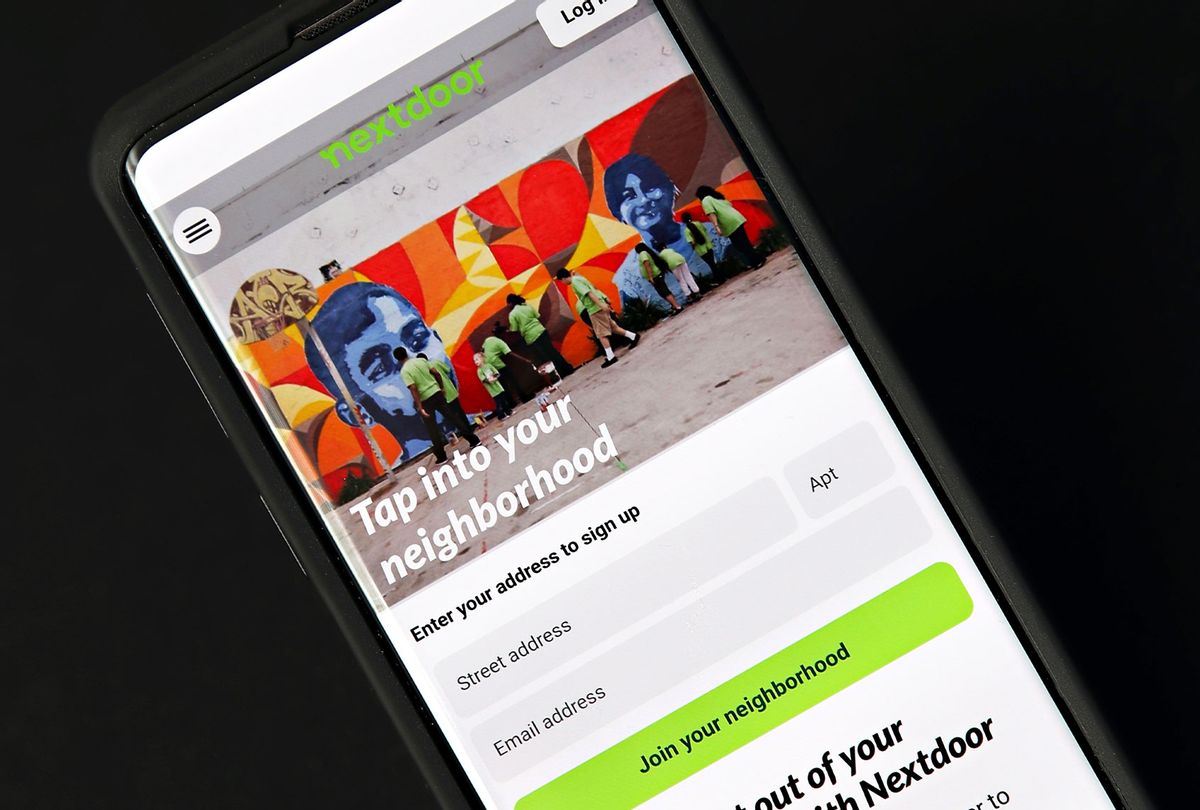 In this photo illustration, Nextdoor, the neighborhood app, is seen on a mobile phone on April 29, 2021 in New York City. Nextdoor is the app where you plug into the neighborhoods that matter to you. Neighbors turn to Nextdoor daily to receive trusted information, give and get help, and build real-world connections with those nearby — neighbors, local businesses, and public agencies (Cindy Ord/Getty Images for Nextdoor)
--

On October 26, 2020, police killed Walter Wallace Jr. in West Philadelphia, as his mother stood on the sidewalk, pleading for his life. Over the next few days, the neighborhood erupted in protest and my phone lit up with alerts from Citizen, a public safety app. Writers for the app monitor and transcribe police scanner chatter, which is then converted into push notifications. There was a break-in at Rite Aid, a burglary at a nearby liquor store, a dumpster fire one block over, a trash fire 900 feet away.

As local news has been decimated by budget cuts and layoffs, apps like Citizen and Nextdoor have ascended to fill the void. Citizen in particular has increasingly positioned itself as a news organization. "We act fast, break news, and give people the immediate information they need to stay safe," reads an overview on the company's LinkedIn profile. Citizen often ranks higher than The New York Times among news apps in the Apple store.

In theory, the platform democratizes reporting; it allows anyone with a smartphone to post comments and videos to a neighborhood network. But in practice, these alerts and the neighborhood commentary attached to them often read like police stenography and amplify existing biases. Users are bombarded by discordant notifications of violence, devoid of meaningful context.

Last November, I deleted Citizen from my phone, grossed out by the tenor of the push alerts. But in March, curious about a nearby apartment fire, I downloaded the app again. This time, when I created an account, I was prompted to sign up for a new feature, Citizen Protect. For just $19.99 a month, a virtual safety agent would track me whenever I left my house. If I said my chosen safe word, the safety agent would start a video chat and, if necessary, send my exact location to a 911 call center. The service promised me that help from Citizen's community of users would always be close at hand. "Live monitoring," the ad said, "means you never have to walk alone." (At this point, it seems Citizen Protect is currently only being promoted to some Citizen users. A Citizen spokesperson told me they were aiming to fully launch in mid-June but that they could not comment further at this time.)

As an illustration of what the app would look like in action, I was shown a faux, promotional push alert for a lost dog. More than a thousand people had been alerted about the dog, the screenshot suggested, and 475 people were looking for it.

It is not difficult to imagine the many ways such a system could go wrong, particularly in a neighborhood like West Philadelphia, where in 1985 the city's police bombed its own citizens, members of the Black separatist organization, MOVE. The bombing killed nearly a dozen people and destroyed more than 60 homes along two city blocks. In May of last year, during protests over George Floyd's murder, Philadelphia police drove an armored vehicle into the mostly Black neighborhood and teargassed residents, while the next day, a violent mob of White men roamed Fishtown largely unimpeded. An app like Citizen Protect is aimed at my demographic: I am a White woman, living in a gentrifying neighborhood, who sometimes goes running after dark. If I felt ambiguously threatened by a fellow jogger — a Black man, for the sake of argument — and alerted my Citizen safety agent and the broader Citizen community, what would happen to him?

I signed up for a free trial of Citizen Protect in order to test out some of the features. What I learned did little to inspire faith that the app would protect everyone equally.

In many ways, Citizen's new Protect feature marks a return to the company's roots. Citizen began as a crime-fighting app called Vigilante that launched in 2016. An ad for Vigilante shows a woman being followed and then assaulted under the Brooklyn-Queens Expressway. She calls 911 and her call is transcribed by a Vigilante operator listening in on the police scanner. An alert — "Suspicious Man Following Woman" — is received by a guy playing chess, a rideshare driver, and a man working in a bodega. These three men arrive just in time, conveniently in concert with the police, and two of them shove a camera in the attacker's face just as the perpetrator is knocking the woman to the ground.

The New York Police Department condemned the app, which was subsequently removed from the Apple store. It relaunched the following year as Citizen, a more innocuous app for the professional bystander. (According to The New York Times, the NYPD spokesperson who condemned Vigilante now works for Citizen.)

Citizen's new Protect service features safety agents who, according to one recent job listing, "triage the level of severity of each call and make appropriate assessments of necessary next steps." The agents are required to "offer support and guidance in real-time to any user who feels unsafe." The job qualifications are minimal — customer service experience is a priority and experience working as a first responder is a plus.

Citizen connects you to a safety agent call center when you click a button that reads "Get Help." The first agent I spoke with told me that she was able to monitor my exact location, pace, phone battery, and — presumably had I connected my phone to, say, an Apple Watch or Fitbit — my heart rate. Another safety agent, Erin, told me that if I added emergency contacts, they would be able to alert those people if I were ever in trouble. "Let's say you got into a car accident," said the safety agent, "if you asked us to contact 911 and your emergency contact contacts — even if we had to hang up the phone because 911 had arrived and you were being stabilized — we could then reach out to your contact, to let them know what's going on."

As cities face a rise in murder rates and budget shortfalls, this Uber-for-private-security feature feels like an ominous sign of what's to come during the post-pandemic recovery. Covid-19 killed nearly 600,000 people in the United States over the past year, while the government put down uprisings for racial justice across the nation with a heavily militarized police force. The post-pandemic landscape feels both hopeful and post-apocalyptic. What has become clear over the last year is that safety in this country is just an illusion. How much would you be willing to pay for that illusion, though? To some, $19.99 a month might seem reasonable.

A feature like Citizen Protect strikes me as mass surveillance disguised as a public good, poised to funnel generalized fear into something more nefarious. It will almost certainly lead to unnecessary police stops and, inevitably, to police violence. It will likely encourage vigilantes like George Zimmerman, who killed 17-year-old Trayvon Martin in 2012.

In the wake of the 1918 pandemic and World War I, the U.S. moved into the Roaring 20s, a period characterized as much by debauchery and cultural development as it was by income inequality and punitive policing. The Pinkertons, a private detective agency known for strike-breaking, and for serving as a goon squad for the wealthy, were omnipresent. If we are now entering our own Roaring 20s, it seems a new kind of Pinkerton is coming with them.

Rebecca McCarthy is a freelance writer based in Philadelphia. She's on Twitter @reemccarthy.