Faith in numbers: Fox News is must-watch for white evangelicals, a turnoff for atheists

That was the conclusion of the nonprofit Public Religion Research Institute in a report released just after the 2020 presidential election. It noted that 15% of Americans cited Fox News as the most trusted source – around the same as NBC, ABC and CBS combined, and four percentage points above rival network CNN. The survey of more than 2,500 American adults also suggested that Fox News viewers trend religious, especially among Republicans watching the show. Just 5% of Republican viewers of the channel identified as being "religiously unaffiliated" – compared to 15% of Republicans who do not watch Fox News and 25% of the wider American public.

To further explore the relationship between different faiths and the TV news they associate with as part of my research on religion data, I analyzed the result of another survey, the Cooperative Election Survey.

The annual survey, which was fielded just before the November 2020 election, with the results released in March, polled a total of 61,000 Americans over a number of topics. One question was on their news consumption habits. It asked what television news networks respondents had watched in the prior 24 hours.

Percentage of respondents who saw TV news in past 24 hours 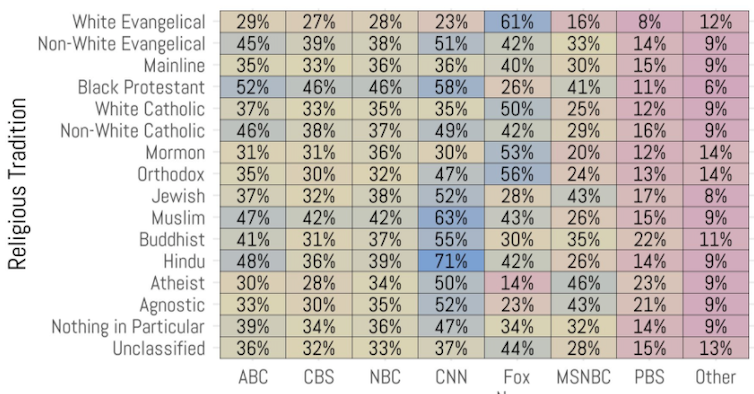 Some very interesting patterns emerged across religious traditions – and the nonreligious – and the type of media being consumed. For instance, of the the big three legacy news operations – ABC, CBS and NBC – there was no strong base of viewership in any tradition.

In most cases, about a third of people from each religious tradition said that they watched one of those legacy networks in the last 24 hours. PBS scored very low among every tradition. In most cases fewer than 15% of respondents reported watching PBS in the time frame.

However, the numbers for the three major cable news networks – CNN, Fox News and MSNBC – were much higher across the board. In eight of the 16 religious and nonreligious traditions categorized in the poll, CNN viewership was at least 50% of the sample. This was led by 71% of Hindus who watched CNN and 63% of Muslims.

The least likely group to watch CNN was clearly white evangelicals, at just 23%. In comparison, MSNBC scored lower nearly across the board. In fact, in none of the 16 classification groups was viewership of MSNBC greater than it was for CNN.

Fox News viewership was higher than that of MSNBC, but was not as widely dispersed as it is for CNN. It's no surprise, given its reputation as a conservative news outlet, that 61% of white evangelicals say that they watch Fox News – in the last election, around 80% of white evangelicals voted for Republican candidate Donald Trump. The other three traditions where viewership was at least 50% are white Catholics, Mormons and members of the Eastern Orthodox Church. It should come as no surprise, as those are three groups that consistently vote for the Republican Party. Just 14% of atheists watched Fox, which is just about in line with the share of white evangelicals who watch MSNBC.

But with the fracturing of conservative media sources seeing more competitors vying for viewers among the right, Fox News could see a drop in viewership from the religious right.

In the wake of the 2020 presidential election, Fox News viewership plunged as many Trump supporters believed that the network was not being loyal to their standard-bearer of the GOP.

Given the vast number of news options that people of faith have and the increase in political polarization in the United States, the pressure for networks to deliver the news that people want to hear will only increase as time passes.

Charles Tiefer, a professor at the University of Baltimore law school, is the author of the forthcoming "Veering Right: How the Bush Administration Subverts the Law for Conservative Causes" (University of California Press). From 1984 to 1995, he was solicitor of the House, advising on congressional investigations including the Iran-Contra affair.