10 TikTok recipes worth trying (trust us — we did)

With everything from pesto eggs to birria tacos, we're betting at least one piques your interest 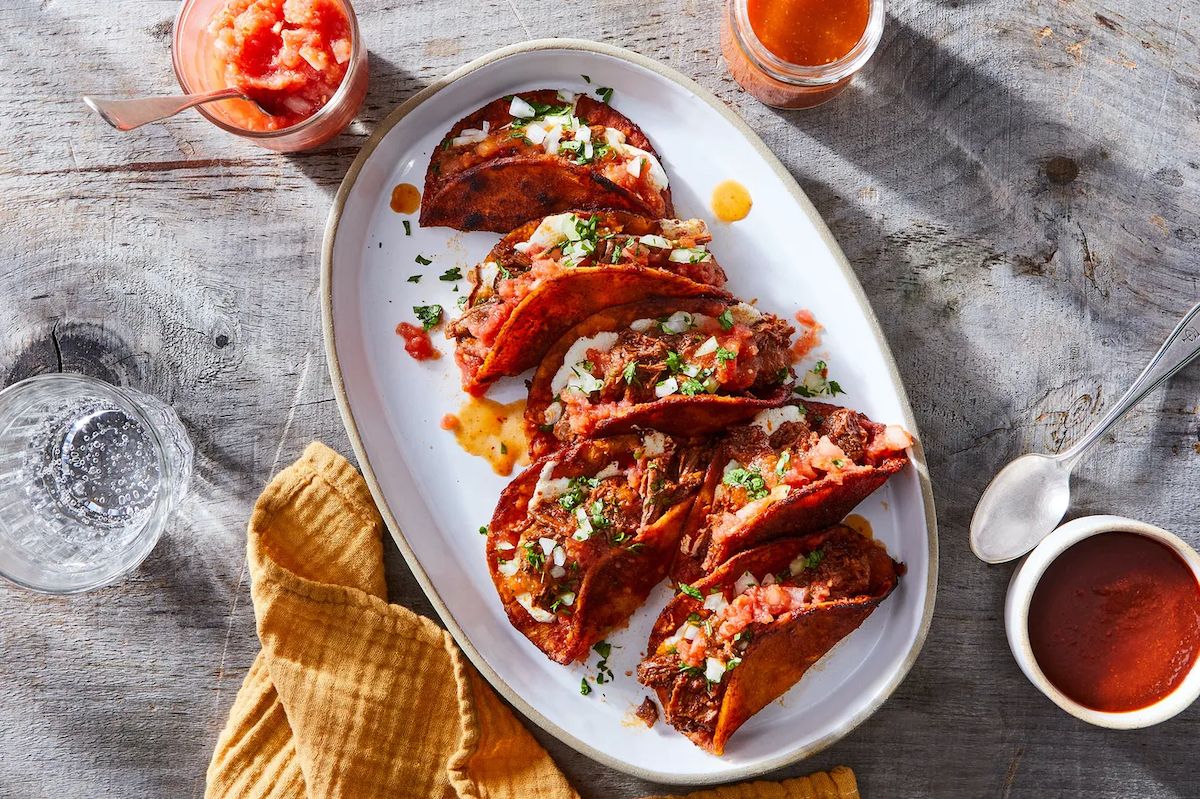 2021 has been the year that TikTok took over food media. As people spent more time in the kitchen and on their phones, lockdown season one provided the ideal springboard for TikTok to catapult itself to the upper echelons of ubiquity. (Now before you go calling me a grandpa, I know the app has been around for a few years now, but it wasn't until recently that I started to feel its effects on a seismic level.)

Around March of last year, the viral trends started to pour in. First there was dalgona coffee and pancake cereal. These kitchen adventures filled our newly found free time with brief, shareable moments of experimentation.

At the start of this year, however, is when TikTok as a birthplace for food trends truly took off. As someone who spends most of their week combing the internet for emerging food trends, TikTok became a homepage of mine. The clips run the gamut from instructional, to aspirational, shocking, surprising, funny and sometimes even creepy.

To commemorate TikTok's indelible impact on the culture, we thought to compile some of the biggest food videos this year thus far.

We started the year off strong with this one. Though a tortilla is endlessly versatile as is, this new hack revealed yet another use for the food. Think quadrants. We asked our team how they'd put their own spin on the trick that was taking over the internet.

Then, of course, there was feta pasta. The viral food trend to end all viral food trends. We spoke to the creator of this recipe about the strange feeling of watching a recipe catch on across the world. This recipe reached such astronomic levels of popularity that the dairy industry felt the effects of such a high demand for feta.

One of my personal favorites was this celebration of all things birria. The dish, which hails from the Mexican state of Jalisco, took TikTok by storm. People started sharing videos of themselves stewing meat, which personally I could watch for hours (and I have).

Next, we tried baked oats, an easy and endlessly versatile breakfast trend that was making the rounds. Essentially, it involves blitzing oats into oat powder, mixing them with wet ingredients, dressing them up to your heart's desire and baking. Here's an example of something that wasn't necessarily birthed on TikTok but benefitted from the strange fame-inducing alchemy of the platform.

The first time I saw this preparation for vegan chicken circulating online, I was surprised. Flour being washed? I didn't know that was a thing. As it turns out, what was being made in most of these videos was actually just seitan! See, sometimes TikTok can teach you a thing or two.

Nature's cereal had to be a favorite of mine. This trend—which was essentially berries in a bowl with coconut water—benefitted from a boost by the singer Lizzo who prepared the recipe and broadcast it to her millions of followers. I tried this one at home and have to admit it was pretty delicious.

Pasta and TikTok are fast friends. Something about the carb and its endless permutations is like catnip for creators on the app. This time around they've positioned tube-shaped pasta tube-side up and are filling cake pans to create some type of honey-comb effect. If you ask me, a bowl of pasta with sauce will do the trick, but more power to a little creativity, I suppose.

The focaccia bread art trend is the perfect epitome of style meets substance. People started using the surfaces of their focaccia as beautiful canvases and, honestly, I'm here for it. Who knew you could cull beautiful imagery from sliced vegetables? Tons of people on TikTok, apparently.

While eggs are one of my breakfast (and lunch, and dinner) heroes, I'm always looking for new ways to make them sing. Cue TikTok user and registered dietician @amywillichowski, who gave us exactly this using something we always have on hand: basil pesto. Simply use the silky green sauce as the cooking fat for the eggs (they can be scrambled, or fried over easy or sunny side up—your choice), put it on a buttered piece of toast (maybe even with some Parm?), and rejoice.

Who knew that cornstarch, sugar, and egg whites could make bread? TikTok user @linqanaaa did—and millions of views later, now we do too. Whether this fluffy dessert is a recipe we actually keep in our repertoire is yet to be seen, but it's certainly worth calling out for its cotton-candy appearance, pleasantly sweet flavor, and enduring internet popularity.

We're only halfway through the year and there's already a TikTok trend per month and then some. These, of course, are only the ones we covered on our site. Not to mention all the other recipes that took off on other media as well. One thing's for sure, TikTok is here to stay and so is the wildly popular food video format.