Decades after its meteoric rise and spectacular fall, let’s look back at the highs and lows that defined Napster 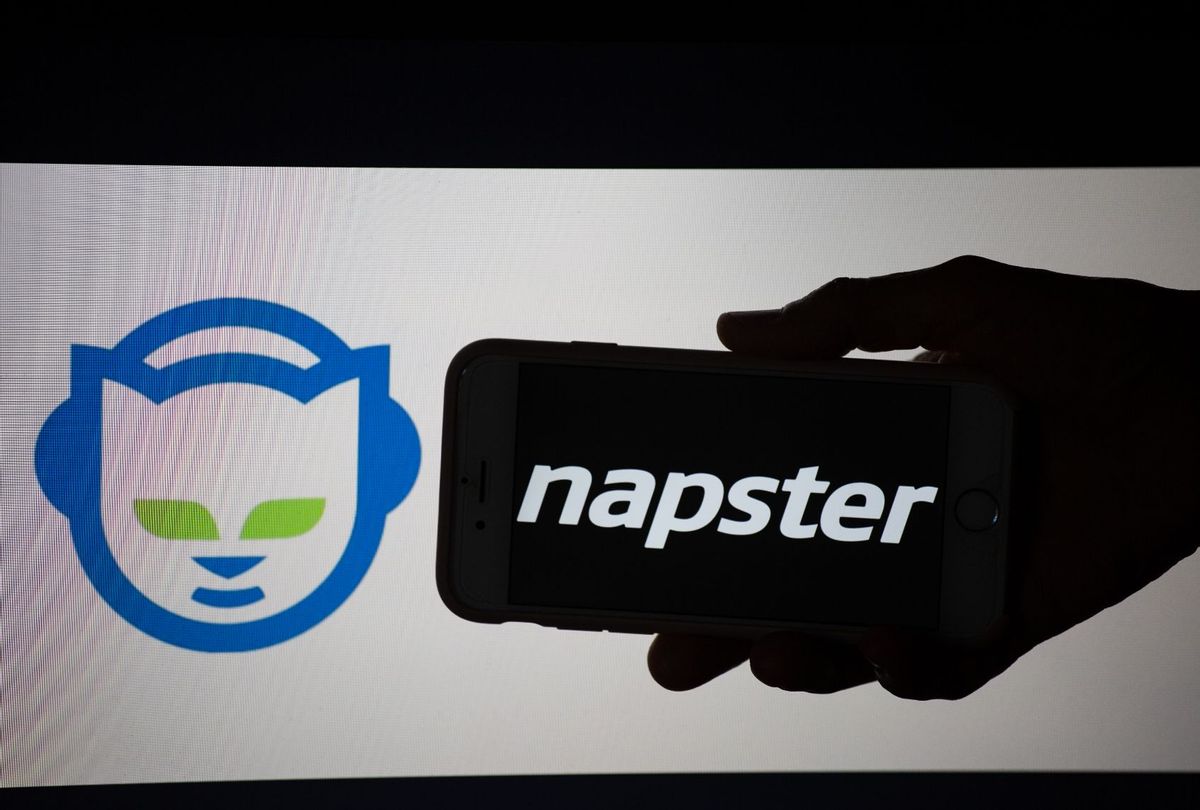 Long before iTunes, Spotify, and YouTube allowed us to discover new music with a tap of a phone, there was Napster, the world's most controversial file-sharing app.

It was the early days of the internet. Chat rooms connected strangers with cryptic screen names and the shriek of a dial-up modem was the siren's call of the world wide web. Into this untamed landscape strode software that allowed a new generation of tech-savvy teens to download all the music they could ever want for free. It was a sensation and a scandal. The record industry would never be the same, but Napster would not survive.

Decades after its meteoric rise and spectacular fall, let's look back at the highs and lows that defined Napster.

1. Shawn Fanning got the idea for Napster while in college.

The concept for Napster first came to 18-year-old creator Shawn Fanning while he was still enrolled at Northeastern University in Boston in 1998. He would listen to his roommate complain about the difficulties of downloading music online, and Fanning imagined the solution could be a program that allowed users to share files directly without involving a centralized file server as a middle man. Obsessed, he scribbled ideas in a notebook, which he carried everywhere. Instead of going back to college after winter break, Fanning dropped out to focus on his code.

Fanning envisioned a cataloging system that would scour a user's hard drive for MP3 files, which could then be shared through free downloadable software. This peer-to-peer system combined the file-sharing capabilities of Microsoft Windows and the simplicity of modern search engines.

Before it was a world-changing app, "Napster" was the screen name Fanning used in hacker chat rooms. The moniker came from the "nappy" texture of his hair, even though his signature look was a buzzcut topped with a baseball cap. It was under this username that Fanning met an aspiring entrepreneur named Sean Parker, one of the few who didn't scoff at the programmer's big idea. The two teens eventually became friends and decided to pitch Napster to venture capitalists.

Over three months, Fanning worked out code for Napster on a PC that was borrowed from his uncle's office in Massachusetts. Meanwhile, Parker secured $50,000 from investors. The pair then hired friends from chat rooms to fill out necessary roles, and Napster officially launched on June 1, 1999.

It didn't take long for Napster to attract users. By the fall of 1999, word of mouth helped Napster's catalog of downloadable songs reach 4 million, with 150,000 registered users. By the summer of 2000, 20 million userswere logged on, and about 14,000 songs were being downloaded every minute. The service peaked at an estimated 80 million users and proved so popular on college campuses that some schools banned it to avoid network congestion.

4. Shawn Fanning soon made the cover of TIME magazine.

On October 2, 2000, the now 19-year-old coder was heralded as a pioneer in computing by TIME magazine. The cover story declared that Napster "already ranks among the greatest Internet applications ever, up there with e-mail and instant messaging."

5. Napster was a dream for music lovers, but not for music sellers.

As Fanning explained to the BBC World Service, "[Napster] was something that provided a better, more reliable and fun way for people to share music and see each other's music collection. For the first time this full history of recorded music was available online to everyone instantly."

Record labels, on the other hand, were all in on selling CDs, and Napster was a clear and direct threat to their business. And while TIME reportedin October 2000 that CD sales were actually up, the value of the record industry plummeted in the years following Napster's debut, dropping from $14.6 billion in sales and licensing in 1999 to $6.3 billion in 2009.

Metallica would not be the first to file a copyright lawsuit against Napster. (That came from A&M.) They wouldn't be the only musicians to sue. (Dr. Dre did, too.) They wouldn't even be the most powerful. (The Recording Industry Association of America represented several major media companies in a joint effort.) But the legendary heavy-metal band got the most headlines.

It all began over a leaked recording of "I Disappear," a song that was to be featured on the "Mission Impossible 2" soundtrack. Ahead of an official release, an unfinished version of the track hit Napster and soon popped up on radio stations. The band was further infuriated when they learned their entire discography could be downloaded for free through the software. So, on April 13, 2000, they sued Napster over copyright infringement.

In the public sphere, the battle placed the ball-capped every-teen Fanning against Metallica's outraged drummer, Lars Ulrich, and an army of lawyers. In a statement about the lawsuit, Ulrich said, "We take our craft, whether it be the music, the lyrics, or the photos and artwork, very seriously, as do most artists. It is therefore sickening to know that our art is being traded like a commodity rather than the art that it is."

Metallica won the lawsuit but lost in the court of public opinion. Backlash was sparked by the suit, Ulrich's remarks, and the band's perceived attack on fans. Metallica had tracked down 335,000 Napster users who had shared their music on the application and demanded Napster ban them. Ulrich even hand-delivered the long list of names, turning up at Napster's offices with boxes of paper printouts. Napster complied, blocking all of those accounts.

7. Other musicians were divided on Napster.

Joining Metallica among Napster's detractors were Trent Reznor, Snoop Dogg, Eminem, and Creed frontman Scott Stapp, who argued, "My music is like my home. Napster is sneaking in the back door and robbing me blind."

Other artists were more open to the service. Chuck D wrote an op-ed for The New York Times proclaiming, "We should think of [Napster] as a new kind of radio—a promotional tool that can help artists who don't have the opportunity to get their music played on mainstream radio or on MTV."

Billy Corgan of the Smashing Pumpkins saw digital music as the way of the future, saying, "There's no stopping it. This revolution has already taken place." On July 11, 2000, Don Henley and Alanis Morrisette supported this idea at the Senate Judiciary Committee hearing about "The Future of Digital Music." The Canadian songstress declared, "For the majority of artists, this so-called piracy worked in the artists' favor," as research showed it spurred ticket sales and merch purchases.

While Napster was enjoying massive popularity, it faced a wave of lawsuits that drained its coffers through legal fees and damages. The argument was essentially whether or not Napster was to blame for users sharing copyrighted materials. Napster argued they were not at fault because their servers did not host music files, as they were shared directly between user hard drives. On February 12, 2001, the federal appeals court rejected this and determined "Napster has knowledge, both actual and constructive, of direct infringement [of copyright]." The company was ordered to stop sharing any files that would infringe on copyright, which numbered in the millions. It was the beginning of the end.

In September 2001, a settlement was reached in which Napster would pay $26 million in damages to songwriters and copyright holders. The Guardian reports these results led to Napster being unable to pay its staff by May 2002. Layoffs and resignations followed. Napster as its users knew it was over.

Though the record labels initially bristled at Napster, the industry eventually shifted because of it, diversifying into digital marketplaces, subscription music services, and the ability to buy a single song instead of a whole album. Looking back, some experts have argued the music industry would have been better served by embracing the lessons Napster offered.

Rolling Stone journalist Steve Knopper wrote a book on this time called Appetite For Self-Destruction: The Spectacular Crash Of The Record Industry In The Digital Age. Speaking to the BBC about his findings, he said:

"[The lawsuits were] a costly error. None of these defenses worked and record executives spent four or five crucial years losing serious business to Napster before Steve Jobs came along with the iTunes Store […] The music industry eventually figured out how to profit from these things, but it took some 10 or 15 years. That lengthy waiting period almost destroyed the business, until streaming came to the rescue years later."

10. Both Shawn Fanning and Sean Parker left Napster (and briefly reunited in 2011).

Sean Parker was ousted from Napster in 2000 after a company e-mail was exposed in which he acknowledged users were sharing "pirated music." This was pointedly not the impression Napster's legal team was trying to paint in the courts, arguing the co-founders' intentions were fair use and sharing, not piracy. Still, he rebounded by investing in emerging tech companies, like Facebook and Spotify. For better or worse, Parker's involvement in the former made him a part of movie history. In David Fincher's Academy Award-winning docu-drama "The Social Network," Parker is portrayed by Justin Timberlake as a fast-talking, cocky tech-bro, who (perhaps infamously) declares, "A million dollars isn't cool, you know what's cool? A billion dollars."

Following Parker's departure and the loss of major lawsuits, Fanning left Napster by choice. He went on to found the gaming company Rupture, which he sold to Electronic Arts for $30 million in 2008. In 2011, Fanning and Parker reunited to found the group video app called Airtime. However, Airtime had a rocky launch and the reunion was short-lived. The opening event was stuffed with stars, including Jim Carrey, Alicia Keys, Julia Louis-Dreyfus, Joel McHale, Snoop Dogg, and Jimmy Fallon. Unfortunately, the service experienced a wave of technical glitches during its premiere, leading CNET reporter Greg Sandoval to lament, "To launch his new start-up, Sean Parker should have spent less of his billions on celebrity guests and more of it on fixing his technology."

Napster faced a long, hard road of lawsuits, acquisitions, and mergers to become a shadow of its former self. In June 2002, the company filed for bankruptcy and began liquidizing its assets. From there, Napster's technology portfolio, name, and trademarks sold for $5.3 million to Roxio, a digital media company that relaunched it as "Napster 2.0." Between 2008 and 2011, Napster changed hands in deals that had it owned by electronics seller Best Buy and the subscription digital music service Rhapsody. Then, in August 2020, the live online music company MelodyVR acquired Napster for $70 million (little more than half of what Best Buy paid).

The brand has lost its shine over the decades. The founders are long gone, as is the easy access to a treasure trove of free music. Still, Napster changed the way we purchase, share, and listen to music. The brand went on to find a second life as a subscription-based music streaming site, which—as of April 2021—was boasting 5 million users and $8 million in monthly revenue.