Dealing with Manchin and Sinema: Democrats finally ditch the carrot and pick up the stick 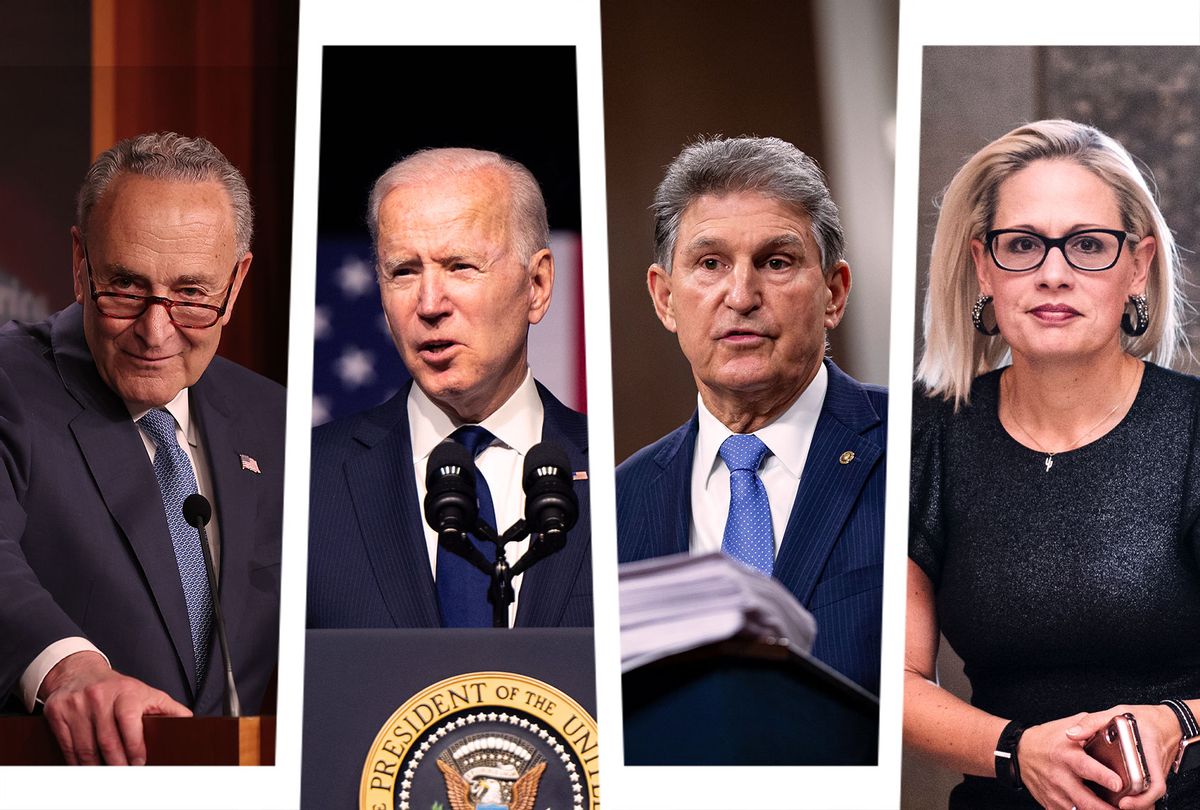 President Joe Biden — echoing the feelings of millions of Democrats who worked their butts off to elect Democrats, only to see all hope of real progress crash on the shores of the Senate filibuster — seems like he's had enough with the do-nothing nature of the Congress' upper chamber. Speaking at an event marking the 100th anniversary of the Tulsa race massacre on Tuesday, Biden stated that the "sacred right" to vote "is under assault with incredible intensity like I've never seen."

The president pointed out that the attacks are led by state-level Republicans across the nation who are passing draconian voting restrictions that target people of color in particular. But he also had some harsh words for Democratic Sens. Joe Manchin of West Virginia and Sen. Kyrsten Sinema of Arizona, whose support for the filibuster is preventing Senate Democrats from passing bills that would block Republican efforts to dismantle fair election systems.

"I hear all the folks on TV saying, 'Why didn't Biden get this done?" the president complained, after vowing to "fight with every tool at my disposal" to pass voting rights legislation. It's because, he argued, of "two members of the Senate who vote more with my Republican friends."

He didn't mention the Obstruction Twins by name, but there is little doubt that it's Sinema and Manchin he's speaking about, as they are the two most obstinately pro-filibuster Democrats in the Senate. Without them, Democrats simply don't have the 51 vote majority to end the filibuster and start moving legislation like the For the People Act.

Biden's "I'm not mad, just disappointed" tone might sound soft compared to some of the rowdier political rhetoric on social media. But by D.C. standards, where it's de riguer to talk of other politicians as if everyone is good friends, that kind of call-out was shocking. And it definitely thrilled progressive political observers on Twitter and elsewhere who have been demanding for months that Biden and other Democratic leaders, especially Senate Majority Leader Chuck Schumer, do more to pressure Manchin and Sinema into changing their minds.

But, as Will Bunch of the Philadelphia Inquirer pointed out, Biden resorting to this rhetoric is not, in fact, a hopeful sign.

Biden's thinly veiled attack on Manchin, Sinema is no reason to cheer. He's supposed to be using the power of the presidency, behind the scenes, to bring them on board -- and no doubt he's tried. You don't attack them like that until you've failed -- horrible news for our country

As much as political Twitter would like to believe otherwise, shaming is not, in fact, an effective persuasion technique. (Although believe me, I get the appeal, as someone who tags both Manchin and Sinema in critical tweets all of the time.) In fact, shame is among the least effective techniques to get someone else to do what you want. Threats and public reproach appeal to the punitive impulse in American culture, but psychological research shows browbeating can backfire, causing the shamed person to dig in their heels and double down on their destructive behavior.

No doubt Biden and Schumer, both old hands at negotiations, understand full well that carrots tend to work better than sticks, which is why the efforts to bring Sinema and Manchin on board with filibuster reform have been carrot-oriented for months. Schumer has largely avoided bringing bills to the floor and forcing a showdown over the filibuster, clearly hoping that his caucus would get in line first. And while most of the White House efforts to win Manchin and Sinema over to the cause of saving democracy have been opaque — outside of Biden giving Manchin's wife a plum appointment to co-chair the Appalachian Regional Commission — it's widely believed the president has been marshalling his energies towards persuading these two gently and lovingly.

None of it has worked.

Manchin keeps foolishly insisting that enough Republicans are decent people that they can be counted on to vote for everything from infrastructure investment to a commission to investigate the January 6 insurrection. He seemed genuinely shocked that the 10 Republican votes he believed would materialize to defeat the filibuster on the January 6 commission didn't appear, even though that was literally what most Democrats and progressive commentators told him over and over would happen.

Sinema, on the other hand, shows troubling signs of being a troll. She gave a gleeful little curtsy when she voted down the minimum wage increase in the COVID-19 relief, but then later put out a statement claiming she supported the provision and was just making some arcane process protest. She made a point of being photographed shoving a ring that says "f*ck off" at the camera, which many took to be a sign that Sinema swiping at her progressive critics. And she didn't even bother to show up for the vote on the January 6 commission, claiming that a "family matter" prevented her from being there.

In addition to Biden's public call-out of these two senators, there's other forms of pressure being brought to bear. As the Washington Post reports, more Democratic politicians and progressive activists are publicly calling Manchin and Sinema out in non-Twitter environments. Schumer is also turning to the stick over the carrot. He's been avoiding forcing votes on bills that Republicans will just filibuster anyway, but that is now changing. First, Schumer forced a vote on the January 6 commission and now has scheduled votes for democracy reform and paycheck equality. That means that Republicans will have to publicly vote to filibuster these bills, rather than privately notify Schumer of their intention to do so. Watching Republicans publicly vote to filibuster bills will, hopefully, highlight how ridiculous and childish Sinema and Manchin — and any other Democrats who are quietly supporting the filibuster — are to believe there is any possibility of "bipartisan" legislation. Believing in the Tooth Fairy, at this point, is more mature and rational.

This turn towards public shame is a sign of Democratic desperation, no doubt. The only real hope that it works lays in the fact that Manchin and Sinema have spent months getting attention for being the holdouts. This likely means they can no longer bask in the ego boost from having the president and others cajole and plead for them to do the right thing. They don't get to be the belles of the ball anymore, but the choice of whether to be hated villains of history is up to them.

Only time will tell. But it's a troubling sign that Democrats are at the end of the line, seemingly short on strategies to save American democracy. Everything now depends on two people, both who seem unbelievably pigheaded and egotistical, to grow up and start acting like they care about the people who got them elected.