Liberty University in turmoil as students protest against continuing relationship with Trump: report 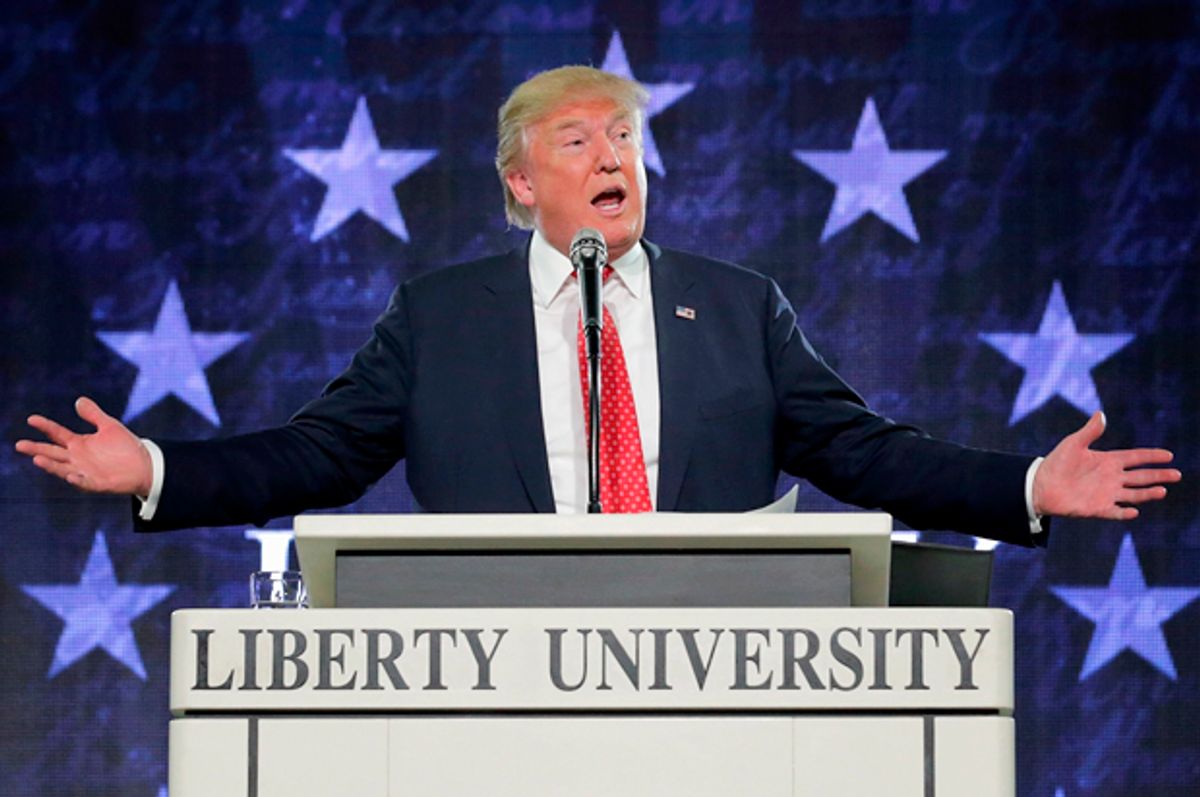 Donald Trump delivers the convocation at the Vines Center on the campus of Liberty University January 18, 2016. (Getty/Chip Somodevilla)
--

While Trump-supporting Jerry Falwell Jr. has been ousted by the university following a sex scandal involving a former pool attendant and Falwell's wife, some trustees at the school are still in the Trump camp and that has some school administrators and students up in arms.

Writing, "Now, 14 years after Jerry Falwell Sr. died and nine months after Jerry Jr. was ousted in a scandal, Liberty is enmeshed in a debate that could have profound implications for the nation's religious right," Politico's Maggie Severns added, "Liberty's ultimate path will influence the greater evangelical world, which is having its own reckoning with the post-Trump Republican Party. With more than 100,000 students, Liberty has long been one of a small handful of top cultural institutions for evangelicals, its board studded with famed pastors and movement leaders. Observers believe that even a small change in direction at Liberty could signal shifting winds among one of Republicans' most important voting blocs."

While the university trustees are considering handing over the reins to another Falwell, Jonathan, who doesn't have the close ties to the one-term president, some trustees are still Trump's corner.

According to interviews with students and trustees at the school, "The members of the executive committee are all older conservatives who tend to be enthusiastic Trump supporters themselves. In Jerry Jr.'s absence, the board has made several key decisions that have served to keep Liberty aligned with the GOP, while at the same time elevating leaders who have the strong religious focus that Jerry Jr. lacked."

"In April, the trustees replaced their acting chairman, Allen McFarland, the first Black person to serve as Liberty board chairman, who had an interest in increasing tolerance and diversity at Liberty. He was replaced with Tim Lee, a pugnacious pro-Trump pastor," Severns explained. "But as Lee and others have taken increasing control of the school, a growing chorus of campus critics has been calling on the trustees to enact greater reforms, and they appear to be listening. A week before they took their strongest step yet to distance themselves from Jerry Jr., suing him for failing to reveal the alleged blackmail scheme, they designated Jonathan Falwell as campus pastor."

According to one student willing to buck the trustees, secular politics need to take a backseat to religious teachings.

Matt Morris explained the school needs to be a place where, "the focus isn't necessarily the conservative values, but more the biblical values that are part of the school."

Morris added, "Shoving politics down people's throats is not the way Falwell Sr. went about it."