What Donald Trump taught America: Democracy can die slowly, or all at once

The Trump years offered a brutal seminar in how democracy can crumble into tyranny. Did Americans pay attention? 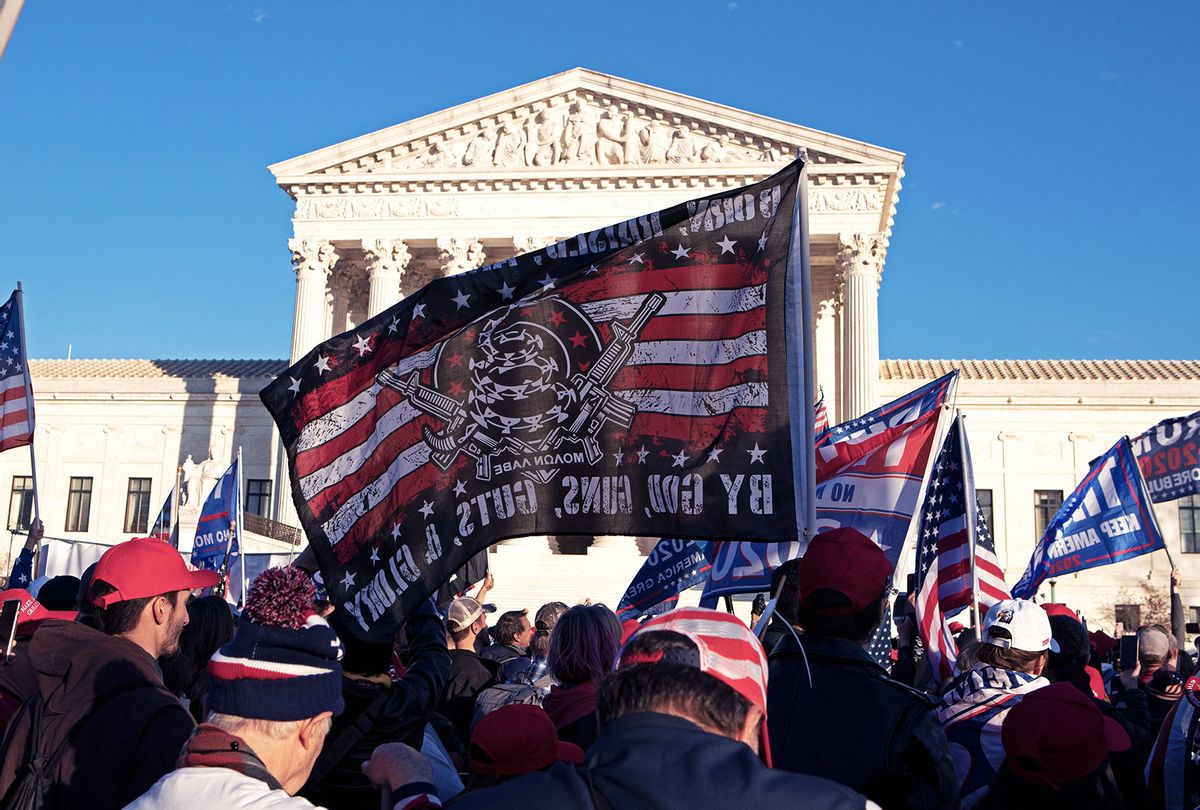 Supporters of US President Donald Trump participate in the Million MAGA March to protest the outcome of the 2020 presidential election in front of the US Supreme Court on December 12, 2020 in Washington, DC. (JOSE LUIS MAGANA/AFP via Getty Images)
--

The Age of Trump and its expanding and escalating aftershocks remains a form of cruel tutelage for the American people in how democracies die. The American people now know what a fascist assault on the world's leading democracy looks and feels like in real time. Few people have the "opportunity" to live through such a world-historical event.

The Age of Trump involved many lessons, such as the regime's daily assaults on truth and reality, its wanton cruelty toward nonwhite migrants and refugees, its disregard for human life, its attacks on free speech and other fundamental civil and human rights, its democide through indifference or incompetence in the face of the coronavirus pandemic, its open embrace of white supremacy, its overt corruption and its disregard for the rule of law.

There was also the cult-like behavior and worship of violence, the relentless propaganda, the deification of the Great Leader, the concerted effort to destroy the commons and social safety net, attacks on secular society and the Constitution by right-wing Christian extremists, the legitimation of right-wing terrorism and other political violence, and the continuing surrender to the plutocrats and corporate oligarchs.

This cruel tutelage also involved exposing the American people to a sophisticated vocabulary and set of ideas for understanding the Trump regime's assaults on democracy and civil society — and resisting them.

This included such language and ideas as "democratic backsliding," the "authoritarian breakthrough," the "self-coup" or "auto-coup," "managed democracy," "plutocratic populism," "authoritarian capitalism," "proto-fascism" and "herrenvolk democracy," along with the more familiar concept of a "failing democracy". As compared to previous decades, the concept of white supremacy was also discussed much more often (and in greater detail) by the mainstream news media.

Ultimately, for too many (white) Americans, the fundamental fact that "fascism" and "authoritarianism" were not something that could only occur "over there" in Europe or other parts of the world but were instead native to the United States (both in the form of white-on-Black chattel slavery and Jim Crow as well as the rise of Trumpism) came as a horrifying revelation for many that shattered childish psychological investments in the myth of American Exceptionalism.

The Age of Trump saw an explosion in the number of books and other popular writing on fascism and authoritarianism. If the most notable example was perhaps historian Timothy Snyder's bestseller "On Tyranny," there were many others.

On a near-nightly basis, MSNBC, CNN, and other mainstream news networks featured interviews with leading experts from such fields as history, psychology, philosophy, law and the social sciences who attempted to provide greater context for the American people to properly understand the dangers of Trumpism and American neofascism.

The best of independent news media, including public television programs, print and online publications and numerous podcasts, strove to rise to the occasion, channeling the spirit of the Fourth Estate as defenders of democracy.

The Age of Trump forced another type of education on the American people, in the form of how many of the country's and the world's leading mental health experts, at great personal and professional risk, tried to sound the alarm about Donald Trump's obvious mental and emotional pathologies, which constituted a public health emergency. Unfortunately, their warnings were, for the most part, not taken seriously by America's political class.

Faith leaders such as Rev. Dr. William J. Barber II also attempted to educate the American people about the existential threat of Trumpism to the nation and its future.

Taken as a whole, these concepts, frameworks and deeds have been indispensable for making sense of Trumpism. But there is still great value to be found in speaking in the most direct, basic and granular terms about the Trump movement and what it represents.

For example, on Jan. 6 the American people watched Trump and his supporters — including much of the Republican Party — attempt a coup in order to nullify the results of the 2020 presidential election. That was the Age of Trump's most powerful teachable moment.

A few of Trump's followers were armed with guns and other weapons. A cache of guns as well as bombs containing homemade napalm were discovered in a nearby vehicle.

Some ran amok, smearing feces on the walls of Capitol corridors and urinating on the floor. Some shouted racial slurs at Black police officers. Quite a number carried and displayed white supremacist flags, militia and Christian nationalist symbols and other hate regalia.

Trump's followers included right-wing paramilitaries who hoped to capture and execute Vice President Pence as well as prominent Democratic members of Congress who were deemed to be "traitors." Some of Trump's faithful erected a working gallows in the park adjacent to the Capitol complex.

What does all this mean? As a practical matter, it means the Trump-controlled Republican Party endorses right-wing terrorism and other crimes as a way of seizing and holding power. It also means that the Republican Party can be reasonably described as a white supremacist terrorist organization and crime syndicate.

Republicans have blocked the formation of an independent commission to investigate the events of Jan. 6. Why? There is little mystery: Republicans in Congress and in many states across the country have shown themselves to be guilty of conspiring with the Trump regime and its numerous efforts to overthrow the results of the 2020 presidential election.

Moreover, the Republican Party is giving permission to its followers, including right-wing paramilitaries and terrorists, to commit more acts of violence — up to and including another direct attack on centers of government — in order to overthrow election results and other democratic outcomes they do not like.

Donald Trump is no longer in office, but America's democracy crisis is escalating rather than receding.

On Memorial Day, President Biden visited Arlington National Cemetery. During remarks honoring America's fallen military personnel, Biden warned: "Democracy itself is in peril, here at home and around the world. What we do now — what we do now, how we honor the memory of the fallen, will determine whether or not democracy will long endure."

On Tuesday, 100 of the leading scholars of democracy issued an emergency call to action in a letter that tries to explain the severity of America's crisis:

We, the undersigned, are scholars of democracy who have watched the recent deterioration of U.S. elections and liberal democracy with growing alarm. Specifically, we have watched with deep concern as Republican-led state legislatures across the country have in recent months proposed or implemented what we consider radical changes to core electoral procedures in response to unproven and intentionally destructive allegations of a stolen election. Collectively, these initiatives are transforming several states into political systems that no longer meet the minimum conditions for free and fair elections. Hence, our entire democracy is now at risk. …

We urge members of Congress to do whatever is necessary — including suspending the filibuster — in order to pass national voting and election administration standards that both guarantee the vote to all Americans equally, and prevent state legislatures from manipulating the rules in order to manufacture the result they want. Our democracy is fundamentally at stake. History will judge what we do at this moment.

After four years of the Trump regime (and beyond) the American people now have personal experience with fascism. But that information does not naturally translate into knowledge.

Real knowledge describes the way a person synthesizes information and applies it in their own lives to make better decisions and develop a more sophisticated understanding of the larger world. As a whole, the American people continue to fail this test in terms of how they choose to respond to the neofascist assault on democracy and freedom.

Many Americans appear exhausted and paralyzed in response to the fact that Trumpism was not vanquished by Donald Trump's defeat in the 2020 election.

The Age of Trump has taught the American people how cruel fascism could be if it is allowed to fully mature in the United States. But too many Americans are still choosing to shield themselves in willful ignorance. As seen in other places and at other times, such denial is not an adequate defense. Perhaps too many Americans have still not absorbed the lessons taught by Donald Trump. They are running out of time to learn them.