By Constance B. Bailey 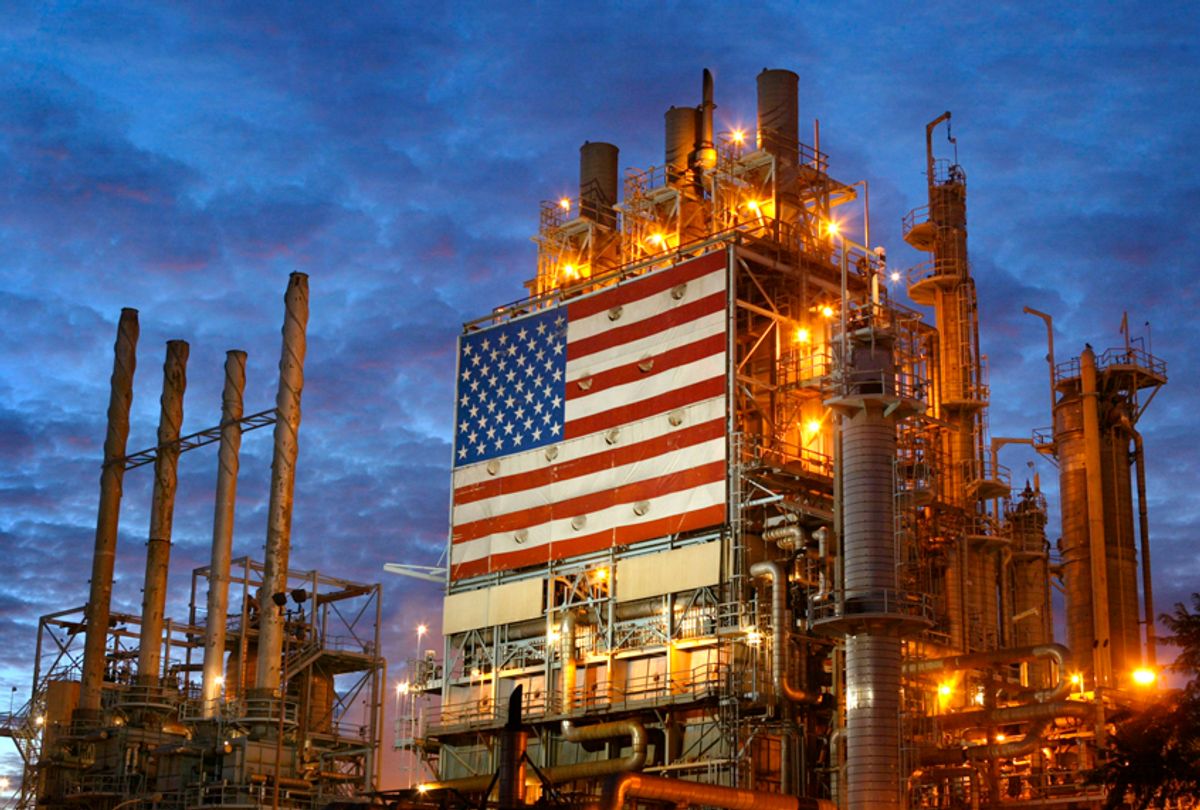 Global oil consumption declined by roughly 9% in 2020 as the pandemic reduced business and pleasure travel, factory production and transportation of goods. This abrupt drop accelerated an ongoing shift from fossil fuels to renewable energy.

U.S. government forecasts show that oil use for transportation, industry, construction, heating and electricity is declining and will continue to drop in the coming years. This trend has enormous implications for the oil industry: As the International Energy Agency observed in 2020, "No oil and gas company will be unaffected by clean energy transitions." 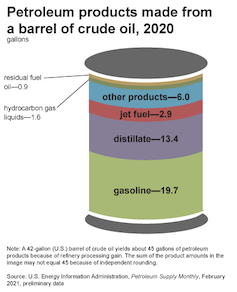 About 80% of every barrel of oil refined in the U.S. today is used to make gasoline, distillate (diesel) and jet fuel, with the rest going into petrochemical products. EIA

Many of these companies are trying to make up losses by boosting production of petrochemicals derived from oil and natural gas. Today roughly 80% of every barrel of oil is used to make gasoline, diesel and jet fuel, with the rest going into petrochemical products. As demand for petroleum fuels gradually declines, the amount of oil used for that "other" share will grow.

This makes sense as a business strategy, but here's the problem: Researchers are working to develop more sustainable replacements for petrochemical products, including bio-based plastics and specialty chemicals. However, petrochemicals can be manufactured at a fraction of the cost. As a biochemist working to develop environmentally benign versions of valuable chemicals, I'm concerned that without adequate support, pioneering green chemistry research will struggle to compete with fossil-based products.

This video from Austrian oil and gas company OMV shows how petrochemicals serve as building blocks for goods from pharmaceuticals to bike helmets.

Petrochemicals are used in millions of products, from plastics, detergents, shampoos and makeup to industrial solvents, lubricants, pharmaceuticals, fertilizer and carpeting. Over the next 20 years, oil company BP projects that this market will grow by 16% to 20%.

Oil companies are ramping up to increase petrochemical production. In the Saudi Arabian town of Yanbu, for example, two state-owned companies, Saudi Aramco and Sabic, are planning a new complex that will produce 9 million metric tons of petrochemicals each year, transforming Arabian light crude oil into lubricants, solvents and other products.

These changes are happening across the global industry. Several Chinese companies are constructing factories that will convert about 40% of their oil into chemicals such as p-Xylene, a building block for industrial chemicals. Exxon-Mobil began expanding research and development on petrochemicals as far back as 2014.

The promise of green chemistry

The Department of Energy has led basic research on bioproducts through its national laboratories and funding for university BioEnergy Research Centers. These labs are developing plant-based, sustainable domestic biofuels and bioproducts, including petrochemical replacements, through a process called "metabolic engineering."

Researchers like me are using enzymes to transform leafy waste matter from crops and other sources into sugars that can be consumed by microorganisms – typically, bacteria and fungi such as yeast. These microorganisms then transform the sugars into molecules, similar to the way that yeast converts sugar to ethanol, fermenting it into beer.

In the creation of bioproducts, instead of creating ethanol the sugar is transformed into other molecules. We can design these metabolic pathways to create solvents; components in widely used polymers like nylon; perfumes; and many other products.

My laboratory is exploring ways to engineer enzymes – catalysts produced by living cells that cause or speed up biochemical reactions. We want to produce enzymes that can be put into engineered bacteria, in order to make structurally complex natural products.

The overall goal is to put carbon and oxygen together in a predictable fashion, similar to the chemical structures created through petroleum-based chemistry. But the green approach uses natural substances instead of oil or natural gas as building blocks.

This isn't a new concept. Enzymes in bacteria are used to make an important antibiotic, erythromycin, which was first discovered in 1952.

All of this takes place in a biorefinery – a facility that takes natural inputs like algae, crop waste or specially grown energy crops like switchgrass and converts them into commercially valuable substances, as oil refineries do with petroleum. After fermenting sugars with engineered microorganisms, a biorefinery separates and purifies microbial cells to produce a spectrum of bio-based products, including food additives, animal feed, fragrances, chemicals and plastics.

In response to the global plastic pollution crisis, one research priority is "polymer upcycling." Using bio-based feedstocks can transform single-use water bottles into materials that are more recyclable than petroleum-based versions because they are easier to heat and remold.

To replace polluting goods and practices, sustainable alternatives have to be cost-competitive. For example, many plastics currently end up in landfills because they're cheaper to manufacture than to recycle.

High costs are also slowing progress toward a bioeconomy. Today research, development and manufacturing are more costly for bioproducts than for established petrochemical versions.

Governments can use laws and regulations to drive change. In 2018 the European Union set an ambitious goal of sourcing 30% of all plastics from renewable sources by 2030. In addition to reducing plastic pollution, this step will save energy: Petroleum-based plastics production ranks third in energy consumption worldwide, after energy production and transport.

But oil company investments in the design of novel chemicals are growing, and the chasm between the cost of petroleum-based products and those produced through emerging green technologies continues to widen. More efficient technologies could eventually flood existing petrochemical markets, further driving down the cost of petrochemicals and making it even harder to compete.

In my view, the growing climate crisis and increasing plastic pollution make it urgent to wean the global economy from petroleum. I believe that finding replacements for petroleum-based chemicals in many products we use daily can help move the world toward that goal.

Constance B. Bailey, Assistant Professor of Chemistry, University of Tennessee

By Constance B. Bailey

MORE FROM Constance B. Bailey