For 3% of the U.S. military budget, we could vaccinate the entire world — before lethal new variants spread wider 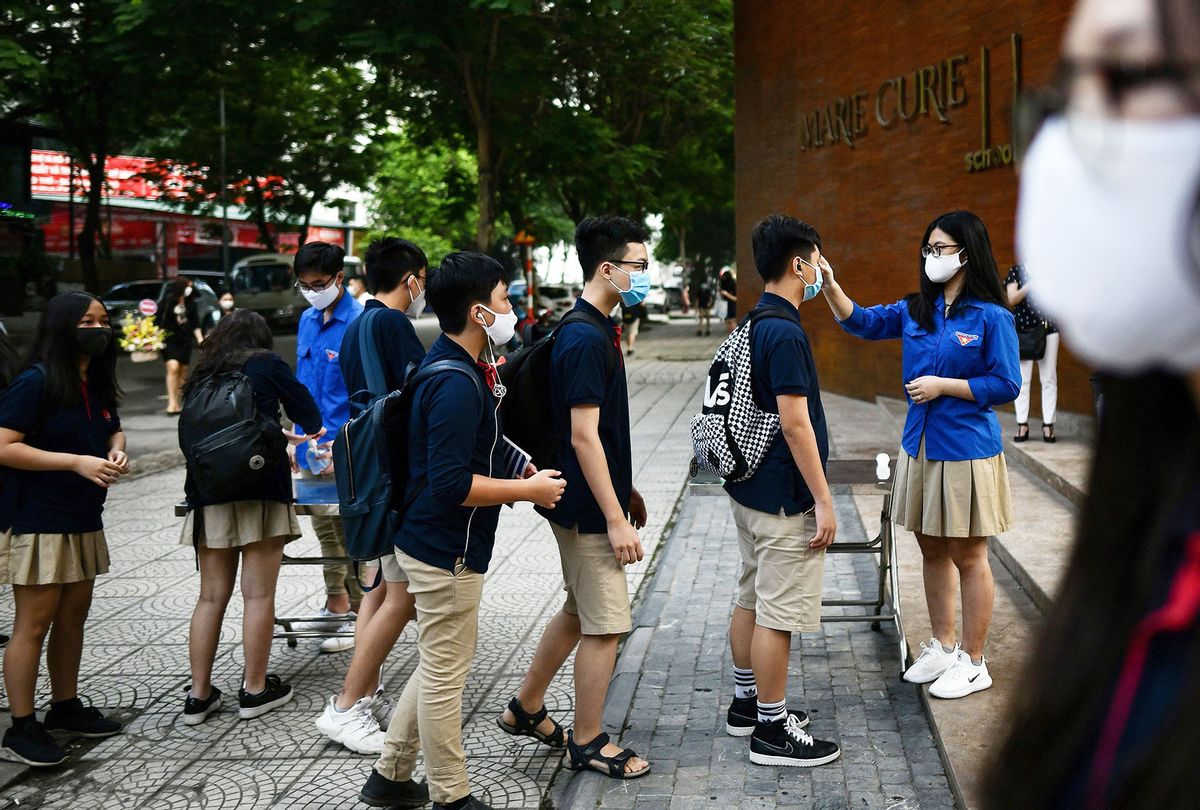 Students wearing face masks stand in a queue to get their temperatures checked at the Marie Curie school in Hanoi on May 4, 2020, as schools re-opened after a three-month closure to combat the spread of the COVID-19 novel coronavirus. (MANAN VATSYAYANA/AFP via Getty Images)
--

A recent Yahoo News/YouGov poll found that worries about the COVID pandemic in the United States are at their lowest level since it began. Only half of Americans are either "very worried" (15%) or "somewhat worried" (35%) about the virus, while the other half are "not very worried" (30%) or "not worried at all" (20%).

But the news from around the world makes it clear that this pandemic is far from over, and a story from Vietnam highlights the nature of the danger.

Vietnam is a COVID success story, with one of the lowest rates of infection and death in the world. Vietnam's excellent community-based public health system prevented the virus from spreading beyond isolated cases and localized outbreaks, without a nationwide lockdown. With a population of 98 million people, Vietnam has had only 8,883 cases and 53 deaths.

But more than half of Vietnam's cases and deaths have come in the last two months, and three-quarters of the new cases have been infected with a new "hybrid" variant that combines the two mutations detected separately in the Alpha (U.K.) and Delta (India) variants.

Vietnam is a canary in the pandemic coal mine. The way this new variant has spread so quickly in a country that has defeated every previous form of the virus suggests that this one is much more infectious.

This variant must surely also be spreading in other countries, where it will be harder to detect among thousands of daily cases, and will therefore be widespread by the time public health officials and governments respond to it. There may also be other highly infectious new variants spreading undetected among the millions of cases in Latin America and other parts of the world.

A new study in The Lancet medical journal has found that the Alpha (U.K.), Beta (South Africa) and Delta (India) variants are all more resistant to existing vaccines than the original COVID virus, and the Delta variant is still spreading in countries with aggressive vaccination programs, including the U.K.

The Delta variant accounts for a two-month high in new cases in the U.K. and a new wave of infections in Portugal, just as developed countries ease restrictions before the summer vacation season, almost certainly opening the door to the next wave. The U.K., which has a slightly higher vaccination rate than the United States, had planned a further relaxation of restrictions on June 21, but that is now in question.

China, Vietnam, New Zealand and other countries defeated the pandemic in its early stages by prioritizing public health over business interests. The United States and Western Europe instead tried to strike a balance between public health and their neoliberal economic systems, breeding a monster that has now killed millions of people. The World Health Organization believes that 6 million to 8 million people have died, about twice as many as have been counted in official figures.

Now the WHO is recommending that wealthier countries who have good supplies of vaccines postpone vaccinating healthy young people, and instead prioritize sending vaccines to poorer countries where the virus is running wild.

President Biden has announced that the United States is releasing 25 million doses from its stockpiles, most of which will be distributed through the WHO's Covax program, with another 55 million to follow by the end of June. But this is a tiny fraction of what is needed.

Biden has also agreed to waive patent rights on vaccines under the WTO's TRIPS rules (the Agreement on Trade-Related Aspects of Intellectual Property Rights), but that has so far been held up at the WTO by Canada and right-wing governments in the U.K., Germany, Brazil, Australia, Japan and Colombia. People have taken to the streets in many countries to insist that a WTO TRIPS Council meeting this Tuesday and Wednesday, June 8 and 9, must agree to waive patent monopolies.

Since all the countries blocking the TRIPS waiver are U.S. allies, this will be a critical test of the Biden administration's promised international leadership and diplomacy, which has so far taken a back seat to dangerous saber-rattling against China and Russia, foot-dragging on the JCPOA with Iran and war-crime-fueling weapons-peddling to Israel and Saudi Arabia.

Ending international vaccine apartheid is not just a matter of altruism, or even justice. It is a question of whether we will end this pandemic before vaccine-resistant, super-spreading and deadlier variants fuel even more toxic new waves. The only way humanity can win this struggle is to act collectively in our common interest.

Public Citizen has researched what it would take to vaccinate the world, and concluded that it would cost only $25 billion — 3% of the annual U.S. budget for weapons and war — to set up manufacturing plants and distribution hubs across the world and vaccinate all of humanity within a year. Forty-two progressives in Congress have signed a letter to President Biden urging him to fund such a plan.

If the world can agree to make and distribute a People's Vaccine, it could be the silver lining in this dark cloud, because this ability to act globally and collectively in the public interest is precisely what we need to solve so many of the most serious problems facing humanity.

For example, the UN Environment Program (UNEP) warns that we are in the midst of a triple crisis of climate change, mass extinction and pollution. Our neoliberal political and economic system has not just failed to solve these problems. It actively works to undermine efforts to do so, granting people, corporations and countries who profit from destroying the natural world the freedom to do so without constraint.

That is the very meaning of laissez-faire, to let the wealthy and powerful do whatever they want, regardless of the consequences for the rest of us, or even for life on Earth. As the economist John Maynard Keynes reputedly said in the 1930s, "Laissez-faire capitalism is the absurd idea that the worst people, for the worst reasons, will do what is best for us all."

Neoliberalism is the reimposition of 19th-century laissez-faire capitalism, with all its injustices, inequality and oppression, on the people of the 21st century, prioritizing markets, profits and wealth over the common welfare of humanity and the natural world our lives depend on.

Berkeley and Princeton political theorist Sheldon Wolin called the U.S. political system, which facilitates this neoliberal economic order, "inverted totalitarianism." Like classical totalitarianism, it concentrates ever more wealth and power in the hands of a small ruling class, but instead of abolishing parliaments, elections and the superficial trappings of representative government as classical totalitarianism did, it simply co-opts them as tools of plutocracy, which has proved to be a more marketable and sustainable strategy.

In response to the 2019 uprising in Chile, its rulers were forced to agree to an election for a constitutional assembly, to draft a constitution to replace the one written during the Pinochet dictatorship, one of the vanguards of neoliberalism. That election has now taken place, and the ruling party of President Pinera and other traditional parties won less than a third of the seats. So the constitution will instead be written by a super-majority of citizens committed to radical reform and social, economic and political justice.

In Iraq, which was also swept by a popular uprising in 2019, a new government seated in 2020 has launched an investigation to recover $150 billion in Iraqi oil revenues stolen and smuggled out of the country by the corrupt officials of previous governments.

U.S.-backed former exiles flew into Iraq on the heels of the U.S. invasion in 2003 "with empty pockets to fill," as a Baghdad taxi driver told a Western reporter at the time. While U.S. forces and U.S.-trained Iraqi death squads destroyed their country, they hunkered down in the Green Zone in Baghdad and controlled and looted Iraq's oil revenues for the next 17 years. Now maybe Iraq can recover the stolen money its people so desperately need, and start using its oil wealth to rebuild that shattered country.

In Bolivia, also in 2019, a U.S.-backed coup overthrew its popular indigenous president, Evo Morales. But the people of Bolivia rose up in a general strike to demand a new election, Morales' MAS (Movimiento al Socialismo) Party was restored to power, and Luis Arce, Morales' former economy minister, is now Bolivia's president.

Around the world, we are witnessing what can happen when people rise up and act collectively for the common good. That is how we will solve the serious problems we face, from the COVID pandemic to the climate crisis to the terminal danger of nuclear war. Humanity's survival into the 22nd century and all our hopes for a bright future depend on building new political and economic systems that will simply and genuinely "do what is best for all of us."