HBO's skate show "Betty" grows up, and not even a pandemic can break its momentum 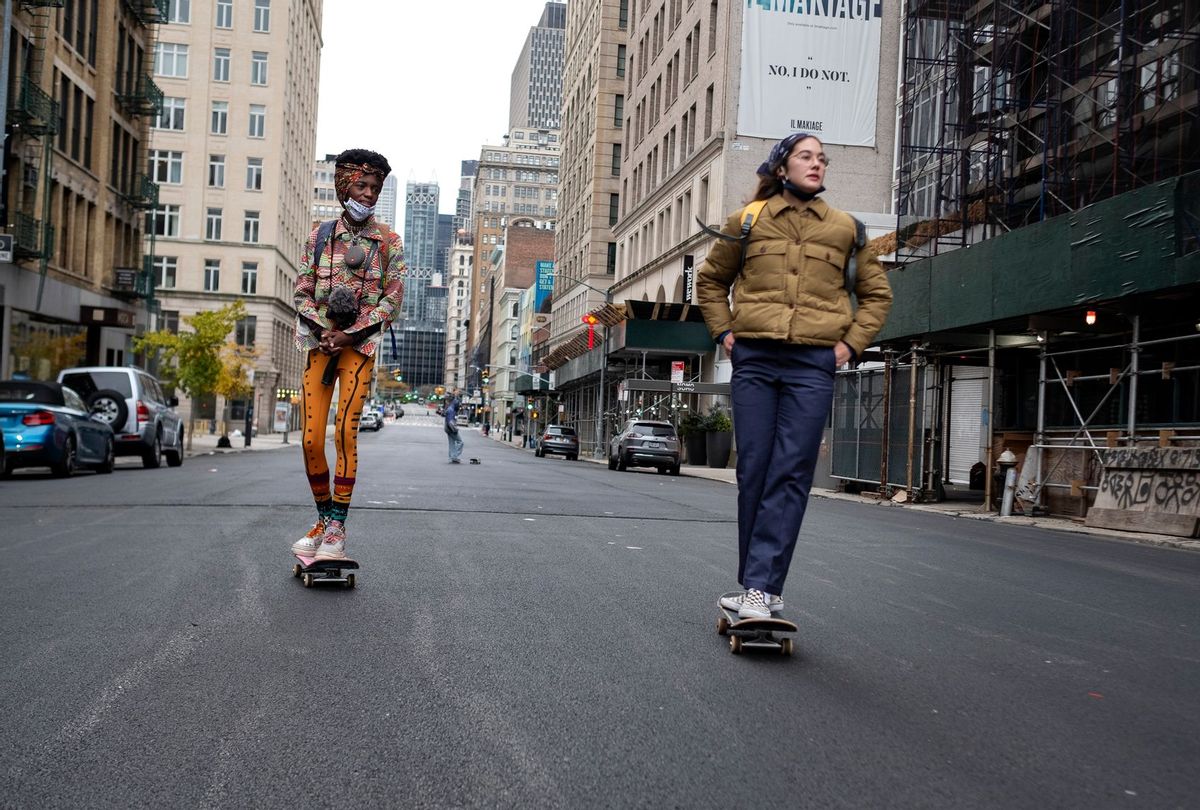 No familiarity with skateboarding is required to get into "Betty," HBO's raw-edged show about a group of 20something young women staking their claim on the streets of New York City from atop their skateboards. All you have to know, and love, is what true freedom feels like.

We're talking the somatic definition of the term, not the jingoistic version. You'll realize this intimately whenever director Crystal Moselle glides alongside one of them during a trip. No matter what's happening in the world, on screen or in our own, these actors convey the bliss of feeling breezes fluttering on skin or achieving some kind of oneness with whatever surrounds them.

This is the essence of what makes "Betty" a one-of-a-kind delight enlivened by a love of skating. For the performer the show represents more than just this. "We're doing it for the people that need it," said Ajani Russell during a recent press day interview with Salon. "People that don't see themselves or don't feel like they belong, or people that are afraid to be who they are because of their circumstances."

"Betty" shines in its sense of purpose, indicated in its title. Usually a dismissive sexist term male skaters fling at women who love the sport, the show claims it as a badge of honor defining characters claiming their place in a subculture that can be chauvinistic.

These stories are only as much about the boys and men who skate as the women at the center of them allow them to be. Camille's (Rachelle Vinberg) storyline revolved around that aspect in Season 1 as she sought legitimacy through their definition of it before seizing it on her own terms.

"We're showing a different side of skateboarding and not the professional side," Vinberg explained, "not, you know, 'We do this and we're amazing at it.' We're showing the real side of it."

Sunbaked city streets and park ramps are their playground in the first season, which premiered last summer at a time when the world was fresh to pandemic lockdowns and COVID had New York by the throat.

Miraculously the show's second outing maintains that vibe despite a couple of noteworthy changes the viewer can see as well as sense. These new episodes pick up on the cusp of autumn, announcing itself by way of puffy coats and other layers along with another unmissable indicator of change: masks.

This is only one respect through which these six new episodes of "Betty" acknowledge the reality of changes in season and circumstantial. Life's hard knocks pound on their doors in other ways too, starting with the skating community's necessary shift from their hallowed parks to indoors. But they're also confronted with larger social conflicts: economic inequity, the heavier toll lockdowns take on communities of color and the ways people band together to overcome these barriers.

But this also fuels each woman to uncover something new about themselves. Janay transforms her passion for vlogging into a mission to find and preserve community while Camille navigates the thornier world of skate brand sponsorship.

"Our characters are growing up more, so we're going to be faced with more real-life things. And I think all the things that our characters go through is not uncommon for young people going into any kind of industry they want to get into," Vinberg explains. "It's like the kind of the rough beginning of trying to figure out how to navigate like, what am I doing? Is this okay? Is this right? Because you're young, you're taken advantage of. We've been taken advantage of, plenty of times."

Indigo and Honeybear's respective storylines are more personal, as the former struggles to establish her financial independence. Honeybear, meanwhile, is figuring out her boundaries and comfort with intimate relationships – what she wants, what she'll tolerate.

Elsewhere Kirt has decided that the best way she can help women is to become a self-styled Venus translator for the feckless boys in their world.

For practical reasons, these new episodes also have a more structured feel to them than the more improvisational first season, which is both welcome and an odd imposition. The flow remains intact, but you can feel a hand gently guiding the action. That's not necessarily a blemish on the piece; it's akin to landscaper gently attempting to instill order and symmetry on a section of forest while retaining the naturalistic appeal of the place.

"That was the main thing, the note that we went into this season. We were like, 'We need more structure.' Everybody agreed on that," Vinberg said. "Because yeah, there's like a vibey-ness to the show, which is good, but we wanted plotlines and to be coherent. I think everybody got that."

Moran described last season as "more kind of a freestyle kind of thing so yeah, [there was] way less improv this time. Not as chill. More intense."

Moonbear found comfort in the structure. "I don't really need to think about the lines as much when I'm doing it," she said. "So it was way easier this time."

Some shifts were palpable in other ways. "The most drastic difference in first and second season was how lonely I felt," Russell admitted. "There's so many restrictions when you're shooting in COVID and like you have to be isolated for long periods of time."

Luckily in skateboarding and in life, there's a flipside to everything. "All that's transpired has really given reason for community building to be expedited," she added. "And I've met so many amazing people with similar interests and motivations as me in regards to like, interests and values and morals and motivations for making work and continuing our practice. And the support that I feel is something I hadn't really experienced on such a large scale."