Leftist close to victory in Peru, despite U.S. opposition and cascade of media slander 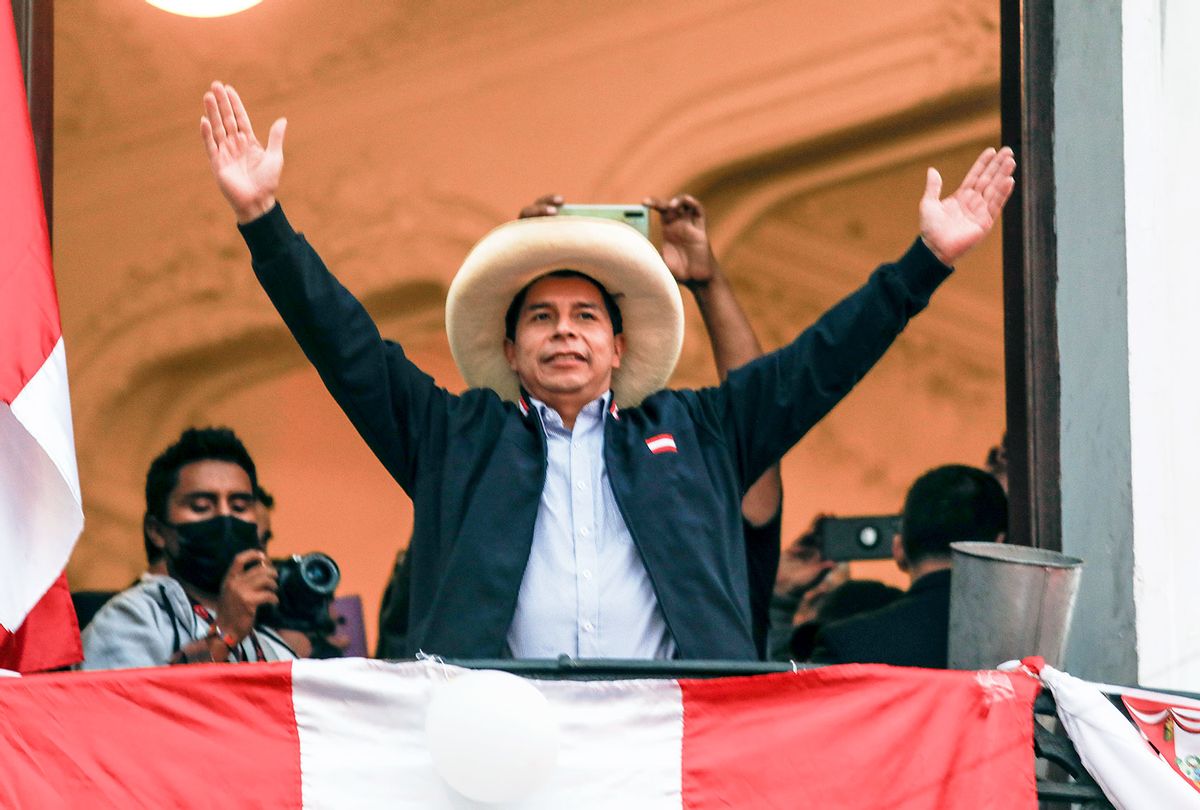 With his wide-brimmed peasant hat and oversized teacher's pencil held high, Peru's Pedro Castillo has been traveling the country exhorting voters to get behind a call that has been particularly urgent during this devastating pandemic: "No más pobres en un país rico" — No more poor people in a rich country. In a cliffhanger of an election with a huge urban-rural and class divide, it appears that the rural teacher, farmer and union leader is about to make history by defeating — by less than one-half of 1 percent, according to the nearly-complete vote count — powerful far-right candidate Keiko Fujimori, scion of the country's political "Fujimori dynasty."

Fujimori is challenging the election's results, alleging widespread fraud. Her campaign has only presented evidence of isolated irregularities, and so far there is nothing to suggest a tainted vote. She can challenge some of the votes to delay the final results, however, and as in the U.S., even an allegation of fraud by the losing candidate will cause uncertainty and raise tensions in the country.

Castillo's victory will be remarkable not only because he is a leftist teacher who is the son of illiterate peasants and his campaign was grossly outspent by Fujimori, but because there was a relentless propaganda attack against him that touched on historical fears of Peru's middle class and elites. It was similar to what happened recently to progressive candidate Andrés Arauz, who narrowly lost Ecuador's elections, but even more intense.

Grupo El Comercio, a media conglomerate that controls 80% of Peru's newspapers, led the charge against Castillo. They accused him of being a terrorist with links to the Shining Path, a guerrilla group whose conflict with the state between 1980 and 2002 led to tens of thousands of deaths and left the population traumatized. Castillo's link to the Shining Path is flimsy: While a leader with Sutep, an education worker's union, Castillo is said to have been friendly with Movadef, the Movement for Amnesty and Fundamental Rights, a group alleged to have been the political wing of the Shining Path. In reality, Castillo himself was a rondero when the insurgency was most active. Ronderos were peasant self-defense groups that protected their communities from the guerrillas and continue to provide security against crime and violence.

Two weeks before the elections, on May 23, 18 people were massacred in the rural Peruvian town of San Miguel del Ene. The government immediately attributed the attack to the remnants of the Shining Path involved in drug trafficking, although no group has taken responsibility yet. The media linked the attack to Castillo and his campaign, whipping up fear of more violence should he win the presidency. Castillo denounced the attack and reminded Peruvians that similar massacres had occurred in the run-up to the 2011 and 2016 elections. For her part, Fujimori suggested Castillo was linked to the killing. 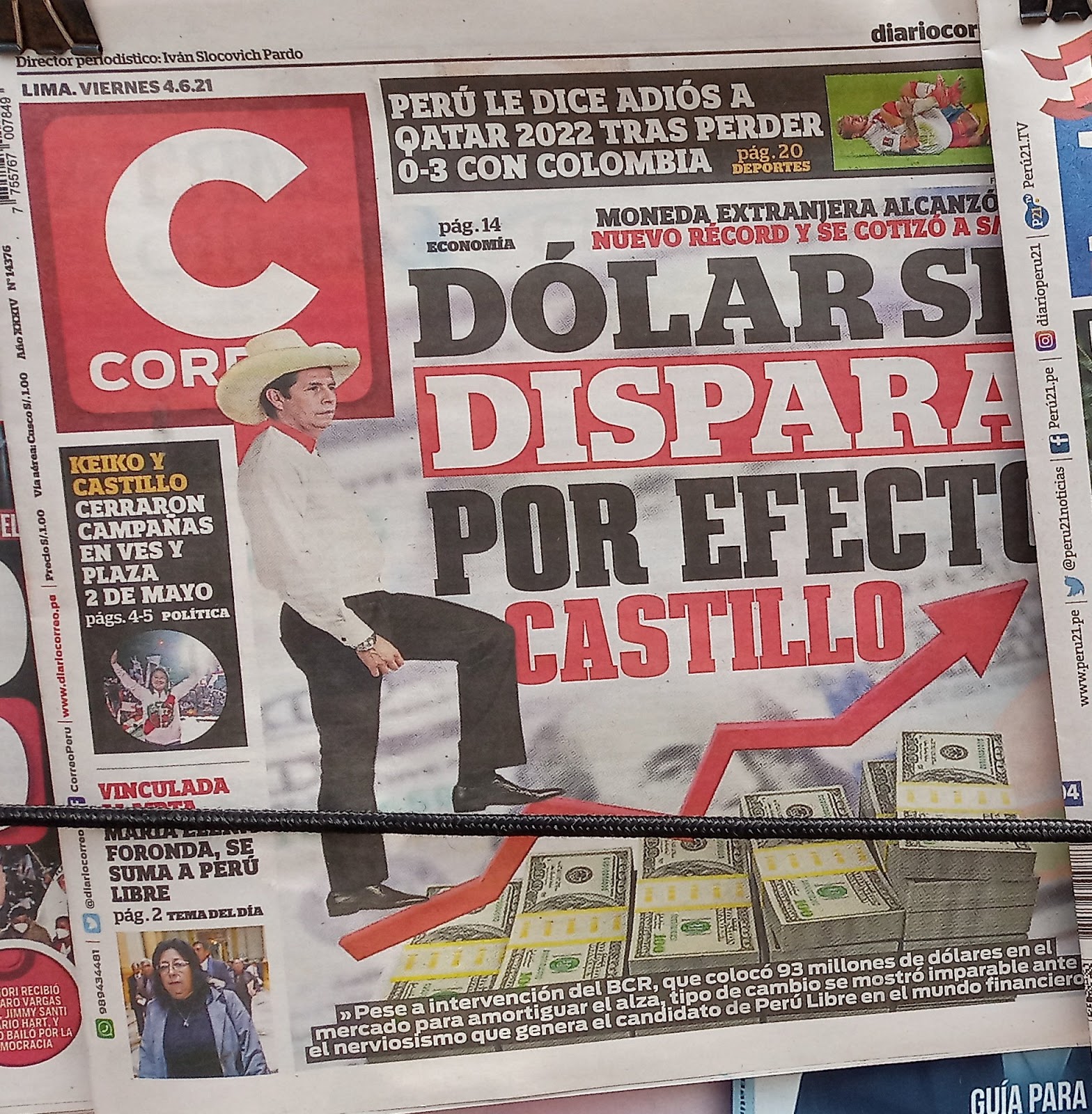 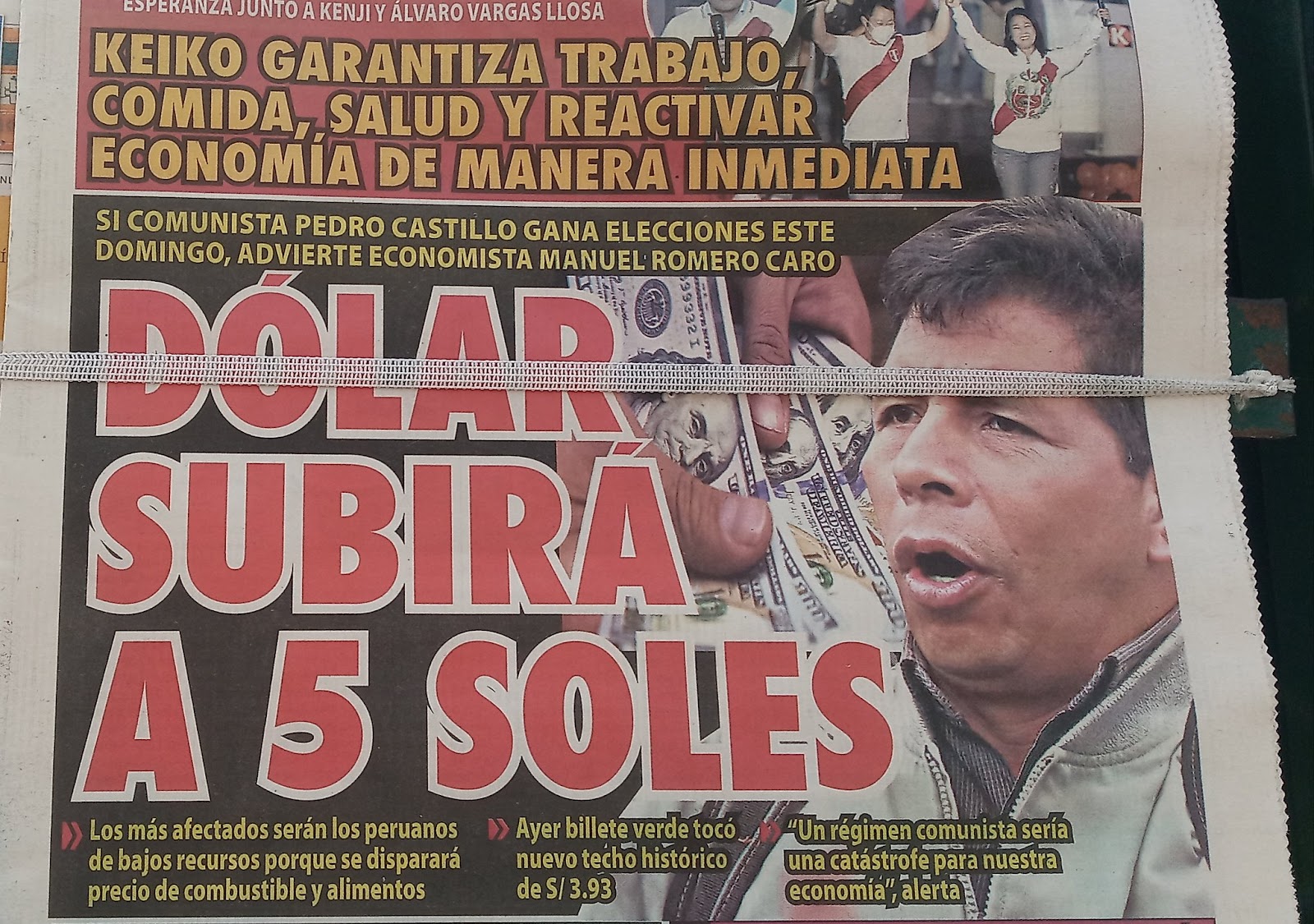 On the economic front, Castillo has been accused of being a communist who wants to nationalize key industries, and who would turn Peru into a "cruel dictatorship" like Venezuela. Billboards along Lima's main highway asked the population: "Would you like to live in Cuba or Venezuela?" referring to a Castillo win. As seen in the photos above, newspapers linked Castillo's campaign to the devaluation of the Peruvian currency and warned that a Castillo victory would hurt low-income Peruvians the most because businesses would shutter or move overseas. Time and time again, the Castillo campaign has clarified that he is not a communist and that his aim is not to nationalize industries but to renegotiate contracts with multinationals so that more of the profits stay with local communities.

Meanwhile, Fujimori was treated with kid gloves by the media during the campaign, with one of the newspapers in the above pictures claiming that "Keiko guarantees work, food, health and an immediate reactivation of the economy." Her past as a first lady during her father Alberto Fujimori's brutal rule is largely ignored by corporate media. She is able to claim that "fujimorismo defeated terrorism," without being challenged on the horrors that the previous Fujimori regime inflicted on the country, including the forced sterilization of more than 270,000 women and 22,000 men, for which her father is now on trial. He is currently imprisoned for other human rights abuses and corruption, though Keiko had promised to free him if she won. Also ignored was the fact that Keiko herself is out on bail as of last year, pending a money-laundering investigation, and without presidential immunity, she too will probably end up in prison.

The international media was no different in its unbalanced coverage of Castillo and Fujimori, with Bloomberg warning that "elites tremble" at the thought of Castillo as president and a Financial Times headline screaming, "Peru's elite in panic at prospect of hard-left victory in presidential election."

Peru's economy has grown impressively over the past 20 years, but that growth did not raise all boats.  Millions of Peruvians in the countryside have been left abandoned by the state. On top of that, like many of its neighbors (including Colombia, Chile and Ecuador), Peru has underinvested in health care, education and other social programs. Such choices so decimated the health care system that Peru now has the shameful distinction of leading the entire world in per capita COVID-19 deaths.

In addition to the public health disaster, Peruvians have been living through political turmoil marked by an extraordinary number of high-profile cases of corruption and four presidents in three years. Five of its last seven presidents faced corruption accusations. In 2020, President Martín Vizcarra (himself accused of corruption) was impeached, unseated and replaced by Manuel Merino. The maneuver was denounced as a parliamentary coup, leading to several days of massive street protests. Just five days into his tenure, Merino resigned and was replaced by current President Francisco Sagasti.

One of Castillo's key campaign platforms is to convoke a constitutional referendum to let the people decide whether they want a new constitution or wish to keep the current one written in 1993 under the regime of Alberto Fujimori, which entrenched neoliberalism into its framework.

"The current constitution prioritizes private interests over public interests, profit over life and dignity," reads his plan of government. Castillo proposes that a new constitution include the following: recognition and guarantees for the rights to health, education, food, housing and internet access; recognition for indigenous peoples and Peru's cultural diversity; recognition of the rights of nature; redesign of the state to focus on transparency and citizens' participation; and a key role for the state in strategic planning to ensure that the public interest takes precedence.

On the foreign policy front, Castillo's victory will represent a huge blow to U.S. interests in the region and an important step towards reactivating Latin American integration. He has promised to withdraw Peru from the Lima Group, an ad hoc committee of countries dedicated to regime change in Venezuela.

In addition, the Peru Libre party has called for expelling USAID and for the closure of U.S. military bases in the country. Castillo has also expressed support for countering the U.S.-dominated Organization of American States (OAS) and strengthening both the Community of Latin American and Caribbean States (CELAC) and the Union of South American Nations (UNASUR). The victory is also a good omen for the left in Chile, Colombia and Brazil, each of which will hold presidential elections over the next year and a half.

Castillo will face a daunting task, with a hostile congress, a hostile business class, a hostile press and most likely, a hostile Biden administration. The support of millions of angry and mobilized Peruvians demanding change, along with international solidarity, will be key to fulfilling his campaign promise of addressing the needs of the poorest and abandoned sectors of Peruvian society.

Leonardo Flores is a Latin American policy expert and a campaign coordinator with CODEPINK.