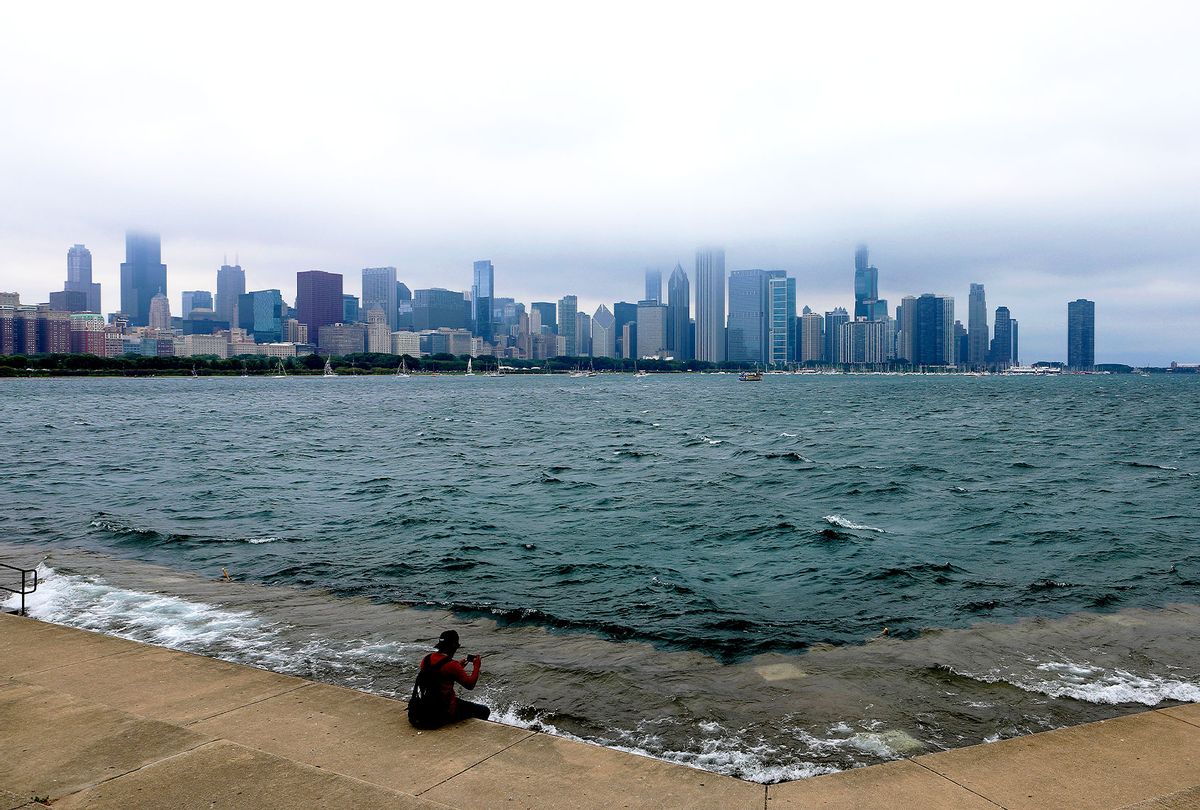 The waters of Lake Michigan crashes over the pedestrian walk as fog rolls through the Chicago skyline in Chicago, Illinois. (Raymond Boyd/Getty Images)
--

In northern Michigan, across rolling sand dunes and a picturesque village situated on Lake Michigan, it is raining toxic PFAS chemicals.

A team of U.S. and Canadian scientists analyzed rainfall at six sites across the Great Lakes region and found high levels of per- and polyfluoroalkyl substances, or PFAS, at all the sites, including, surprisingly, rural Michigan. The rainwater samples contained PFAS levels between 100 to 400 parts per trillion (ppt). For comparison, the U.S. Environmental Protection Agency's "safe" limit for drinking water — not rainwater — is 70 ppt.

The findings highlight the ubiquitous nature of PFAS chemicals, man-made substances used in common household products because of their water-, oil-, and grease-resistant qualities. Firefighting foam is also a main source of PFAS. Commonly referred to as "forever chemicals," their legacy can be found everywhere — in soil, groundwater, lakes, oceans, and now, even the rain.

"All of these products that we use in our everyday life are treated with PFAS," Marta Venier, an environmental chemist at Indiana University and the principal investigator for the research, told Grist. "So every time we use them, there is either dust or air where these chemicals are released."

PFAS chemicals are transported through the air and then deposited via precipitation into the environment, where it accumulates, can be ingested by wildlife, and can wind up in the human body. Studies indicate that exposure to PFAS chemicals can cause reproductive, liver, kidney, and immunological damage in laboratory animals. It's also a possible carcinogen — two PFAS chemicals have been shown to cause tumors in animal studies.

The new research was conducted by the Integrated Atmospheric Deposition Network, a monitoring program funded by the U.S. EPA's Great Lakes National Program Office, and managed by Indiana University.

The research also showed the magnitude of the problem — at all six test sites, there was more PFAS than other pollutants, such as polychlorinated biphenyls (PCBs) and polycyclic aromatic hydrocarbons (PAHs). Scientists say the early analysis, first presented at the Emerging Contaminants in the Environment Conference in April, shows that PFAS chemicals are a major contaminant regionally in snow and rain.

While immediate exposure to the contaminated rainwater isn't a concern, scientists warn that because PFAS chemicals linger in the environment, there could be serious long-term effects of airborne PFAS contamination on wildlife and human health. "There's a lot of information that needs to be pieced together," said Venier.

The findings add to the growing body of research on airborne movement and deposition of PFAS. This past April, another group of researchers, from the College of Wooster, shared their findingsfrom testing rainwater in Ohio and Indiana at a meeting of the American Chemical Society. The scientists found 17 different PFAS chemicals in the rainwater.

Researchers plan to keep analyzing PFAS in rainwater to be able to trace the chemicals back to specific polluters, and to evaluate seasonal trends in concentration. In 2018, for example, investigators in North Carolina traced PFAS chemicals from rainwater to Chemours, a chemical manufacturing facility in Bladen County, prompting the state agency to order emissions reductions.

With other chemicals, like PAHs, researchers have found that the levels are higher in the winter when we use heat more, so Venier plans to look for the same trends with PFAS to increase understanding so regulatory action can be taken based on the findings.

Jena Brooker is a contributing writer from Grist.org.