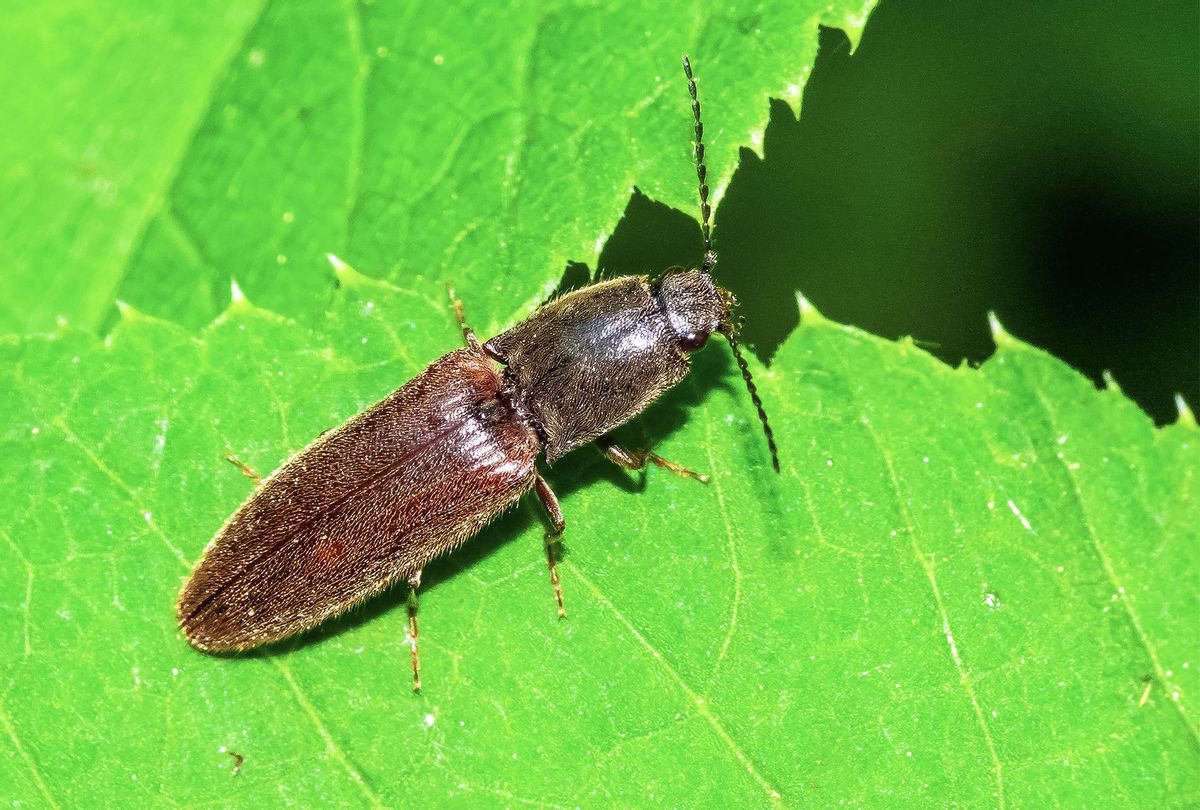 When you pull the film advance lever on an analog camera, you are loading a complicated system of springs and latches. With one smooth motion, you are not just advancing unexposed film across the body of the camera — you are providing the energy that will eventually release a cascade of action: ultimately opening and closing a mechanical eye as quickly as one thousandth of a second. It's an impressive feat of engineering, but still far too slow to catch a click beetle's jump.

Jumping like a click beetle requires an amazing amount of power different from human strength. We flex and contract muscles to perform work, which suits us just fine, since our muscles can efficiently generate sustained outputs of power. But click beetles don't need sustained power to perform their incredible jumps. Instead, click beetles lock, load, and fire themselves using spring-latch systems similar to the inner workings of a mechanical camera.

In normal situations, the click beetle skitters around like any other beetle on six tiny legs. But occasionally these beetles find themselves on their back with the ground hopelessly out of reach of their little legs. In such a situation, a click beetle may appear to squirm and flail at first, but soon enough it will begin to arch its back, pause, and then explode upwards with a loud CLICK. This jump can launch a beetle with accelerations up to 300-times that of gravity, or 100-times larger than the acceleration felt by astronauts during a rocket launch. The jump gives them an opportunity to roll and somersault in the air, hopefully landing back on their feet.

Though researchers have turned ultra-fast cameras on these powerful creatures, it's only recently that a team of researchers lead by Aimy A. Wissa, a professor of aerospace engineering at the University of Illinois at Urbana-Champaign, have been able to see the inner workings of the spring and latch system during an actual jump. They found an elegant internal spring system like a camera or catapult that unleashes its stored energy in the form of an ultra-fast and powerful jump.

Imagine a click beetle divided into two halves, the head and the abdomen, which are connected by a hinge. The hinge mechanism also includes a "peg" and "lip" made of a stiff cuticle material. When the beetle bends backwards, the peg is pulled back across the lip where it can be latched, holding the beetle in its backbend. The beetle then contracts a softer, more elastic cuticle which acts against the latch, attempting to unbend itself. The resistance to this contraction is what loads the soft cuticle with elastic energy, much like stretching or compressing a spring. When the peg is finally released, it fires past the lip, releasing a huge amount of energy incredibly quickly.

This sudden unbending of the hinge hurls the beetle into the air upwards of 20 body lengths high. Surprisingly, the beetles don't sustain any internal or external damage during the jump or landing. Of course the beetle has a hard shell to protect it from sudden impacts but how the beetle protects its insides from its powerful clicking was still somewhat of a mystery, until now. The researchers were able to see how the soft cuticle not only allows the beetle to store and release energy, but how it also dampens the explosive actions inside the beetle's body.

The main difficulty researchers had in understanding the spring-latch system of click beetles was actually observing their internal mechanics in real-time. The latching and loading phases typically take a few tenths of a second, but the energy release phase is much faster.

The researchers found that opening the latch and releasing the stored energy takes the beetle about 10 milliseconds, or a quarter of the time a single frame stays projected on a movie screen. High-speed cameras can work this fast, but they can't see through a beetle's shell. The challenge was to find a super-fast imaging technique that could penetrate the shell and resolve the soft and springy materials, all while maintaining a high resolution to see the beetle's tiny parts.

Wissa and her coauthors used an approach called "synchrotron phase-contrast X-ray imaging" to overcome these complications. Normally, X-ray imaging measures how much light a material absorbs to tell you what's going on under the skin, but the X-rays also shift slightly when they pass through different materials. By looking at how much light is absorbed and how the X-rays have shifted, researchers can see hard stuff like bones, but also soft stuff, like the elastic cuticle inside the beetle that stores and releases energy during a "click." And unlike the X-ray imaging you may be familiar with from visiting the dentist, these X-rays recorded images at up to 30,000 frames per second.

Beetles usually perform their clicks while laying on their backs, so the researchers held their subjects still with a gentle clamp, allowing them to record multiple clicks without filling the air with springing beetles. This let them carefully track the moving parts inside a live beetle as it performed every stage of its click, from locking and loading to unleashing the stored energy.

The results give us a better understanding of how the inner materials of the beetle can store and release so much energy so quickly, and demonstrates a non-invasive way to probe explosive processes within other tiny animals like pistol shrimp and trap-jaw ants. The tricks these creatures use could inspire a new generation of small and super powerful insect-like robots capable of generating and sustaining high-acceleration movements.