NASA's future Venus missions will teach us about the planet's past, and whether life existed previously 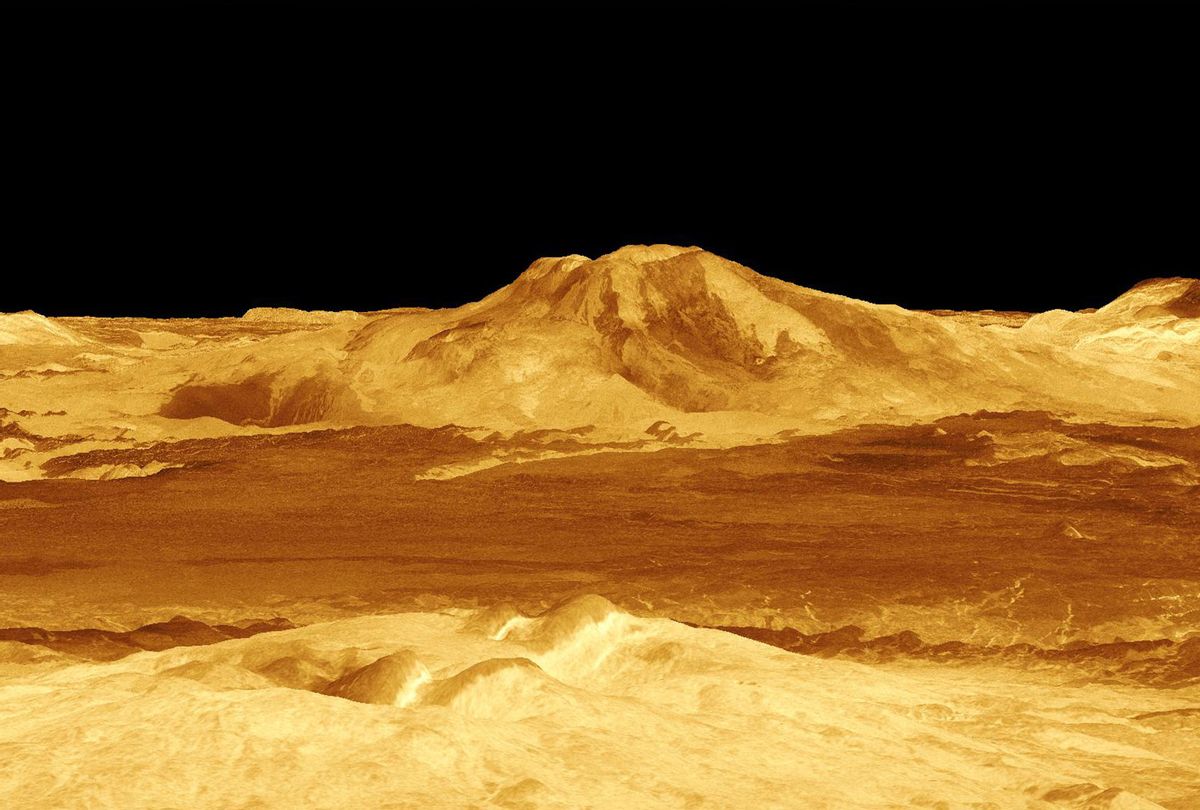 A volcano named Sapas Mons dominates this computer-generated view of the surface of Venus. (NASA/JP)
--

NASA is finally headed back to Venus. On June 2, 2021, NASA Administrator Bill Nelson announced that the agency had selected two winners of its latest Discovery class spacecraft mission competition, and both are headed to the second planet from the Sun.

I'm a planetary scientist and a self-confessed Venus evangelist, and here's why I'm so excited that humanity is going back to Venus.

This is the first time since the Magellan mission in 1989 that NASA has committed to sending spacecraft to study the shrouded planet just next door. With the data these two Venus missions – called VERITAS and DAVINCI+ – will collect, planetary scientists can start tackling one of the biggest mysteries in the solar system: Why is Venus, a planet almost the same size, density and age of Earth, so very different from the world humanity calls home?

Venus is a rocky planet about the same size as Earth, but despite these similarities, it is a brutal place. Although only a little closer to the Sun than Earth, a runaway greenhouse effect means that it's extremely hot at the surface – about 870 F (465 C), roughly the temperature of a self-cleaning oven. The pressure at the surface is a crushing 90 times the pressure at sea level on Earth. And to top it off, there are sulfuric acid clouds covering the entire planet that corrode anything passing through them.

But perhaps the most fascinating aspect of Venus is that it may have once looked a lot like Earth. Recent climate models suggest that in the past the planet could have had liquid water oceans and a mild climate. It may have been habitable for as long as 3 billion years before succumbing to some sort of climate catastrophe that triggered the runaway greenhouse. The goal of these two new missions to Venus is to try to determine if Venus really was Earth's twin, why it changed and whether, in general, large rocky planets become habitable oases like Earth… or scorched wastelands like Venus.

What might come as a surprise is that in the 1960s and 1970s Venus was the central focus of space exploration like Mars is today. The U.S. and Soviet Union sent more than 30 spacecraft in total to the second planet from the Sun. But since 1989, only two missions have gone to Venus, and both were focused on studying the atmosphere – the European Space Agency's Venus Express and Japan's Akatsuki.

In contrast, the VERITAS and DAVINCI+ missions will take a holistic view by exploring the geological and climatological history of Venus as a whole, in two very different but complementary ways.

The thick, global layer of sulfuric acid clouds covering Venus make it almost impossible to see the surface with normal cameras. That's why the VERITAS orbiter – short for "Venus Emissivity, Radio Science, InSAR, Topography, and Spectroscopy" – will carry a powerful radar system. This radar can peer through the clouds and gather images and topographic data up to 10 times higher-resolution than any previous mission to Venus. This will allow scientists to look for clues about Venus' earlier climate that may be preserved in rock formations on the surface and might also answer whether the planet is geologically active today. And, finally, this exciting mission will use a special, infrared camera to peer through the atmosphere at very specific wavelengths to take the first global measurements of what Venus' rocks are made of – something scientists know very little about.

VERITAS' stablemate is DAVINCI+, or "Deep Atmosphere Venus Investigation of Noble gases, Chemistry and Imaging." The DAVINCI+ mission also involves an orbiter, but the real star of the show will be the meter-wide atmospheric probe. The probe will drop into Venus' atmosphere and free-fall through the thick clouds for about an hour before reaching the surface.

On the way down, it will take samples of the atmosphere, specifically measuring a variety of gases including argon, krypton and xenon. Different climate histories for Venus would lead to different ratios of these noble gases in the atmosphere – and so by analyzing these ratios, scientists will be able to work out how much water the planet formed with, and even how much water it has lost over the past 4.5 billion years.

But that's not all the probe will do. Just before impacting crash landing into an area called Alpha Regio that has some of the oldest rocks on the planet, the probe will take infrared images of the surface as it comes into view through the gloom of the lower atmosphere. Those images will be the first ever taken from above the surface but below the cloud deck, showing planetary scientists Venus as never before.

Studying Venus can offer valuable insight into how other rocky, potentially habitable planets in the galaxy – like Kepler-186f, seen here in an artist's rendition – might evolve. NASA Ames/SETI Institute/JPL-Caltech

Now is the time to go back to Venus

I have argued before for returning to Venus, so to say I'm enthusiastic about these missions is an understatement. Venus may hold the key to understanding the past – and possibly the future – of Earth. As astronomers discover more and more Earth-size worlds around other stars, they need to understand whether the outcome we see on Earth – blue skies, water oceans and even a thriving biosphere – is the norm, or if the hellish, barren wastelands of Venus are the rule.

Several decades of sustained Mars exploration have shown that each mission answers earlier questions and also raises new ones. I don't know what surprises VERITAS and DAVINCI+, scheduled to launch in the late 2020s, will uncover at Venus, but I do know they'll discover aspects of the planet that no one had ever imagined. Scientists and mission teams across the world have worked hard to realize a "Decade of Venus," and it's starting to pay off. In fact, only a week after NASA's announcement, the European Space Agency declared its plans for a Venus mission, too. With these new missions, it's my guess – my hope – that we're at the start of a new, golden age of Venus exploration.