It's not in our heads: More women are speaking up about how their breast implants are making them ill 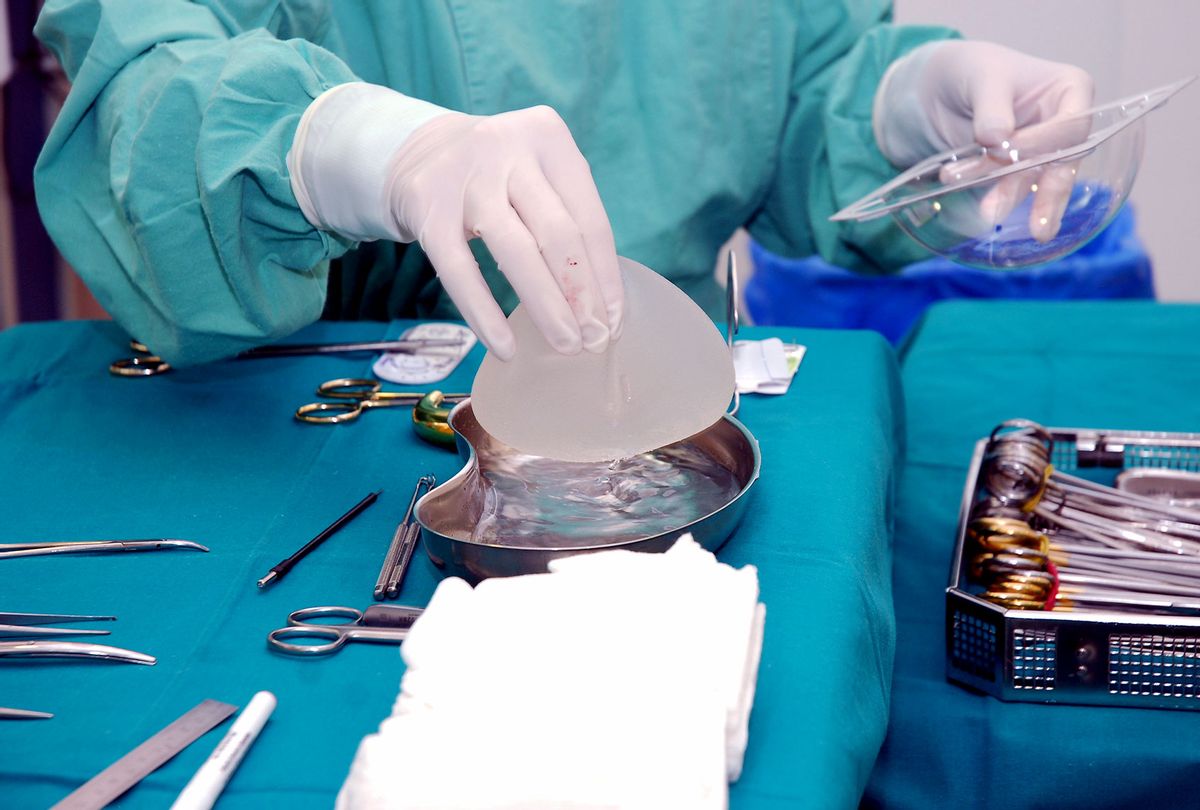 In November 2016, a few weeks after I had breast implant surgery, I came down with an unexpected case of thrush (an unappealing fungal infection characterized by a thick white coating on my tongue). As a Black married mother of two, even though I was still sick, I tried — but failed — to power through and take care of my kids. With intense flu-like aches, pain, and fever, it hurt to eat, drink, swallow, or even open my mouth. I couldn't properly brush my teeth for several days.

Unfortunately, my primary care physician was on vacation. Panicked, I called the Manhattan oncologist whom I had seen a few weeks earlier. He'd been very kind to me following my DCIS breast cancer diagnosis, unilateral mastectomy and post-surgical treatment. The officer's medical team could barely understand me when I tried to make the appointment on the phone.

"I don't think you have thrush — didn't I just see you a few weeks ago?" he said, trying to put me at ease as I stared at his cheerful neon tie. (I think he prided himself on his fun ties.)

It was torture opening my mouth so the doctor could diagnose me.

"Okay, that's the worst case of thrush I've seen in some time," the seasoned specialist said. He said he was putting me on antibiotics stat. I asked — or rather, wrote on a notepad, since I couldn't speak clearly — if there could be any connection between the my immune system and the very new breast implant that was now in my body. The oncologist emphatically dismissed the notion as impossible.

Once he got the results of my lab work back, my physician said there was no evidence of anything wrong; I should bounce back in a few days. "These things sometimes happen," he told me, smiling as he ushered me out.

While the antibiotics eventually cleared up the thrush, unfortunately I have never fully bounced back. In subsequent years since my breast implants were put in, it became even more clear that something was going on with my immune system. But none of my doctors really listened.

Although it was not formerly recognized by the medical community until recently, Breast Implant Illness (BII) has, in the past few years, finally received attention from both media and researchers. Nicole Daruda founded a Facebook's support group, called Breast Implant Illness Healing by Nicole, in 2013; now, it boasts over 145,000 members. Daruda tentatively estimates that 50,000 women in the US have BII, although precise research-backed numbers are not readily available.

"We are overwhelmed by women trying to join the Facebook group to be educated about Breast Implant Illness," Daruda said. She estimates that 3,000 to 5,000 women message the group's moderators every month. To try to meet the demand, Daruda later founded a nonprofit, Healing Breast Implant Illness Society of North America.

Research is just barely starting to emerge on BII. One study, published in Annals of Plastic Surgery in 2020, followed 750 women suffering from Breast Implant Illness over a multi-year time period. Once these women surgically removed their breast implants, the vast majority reported the majority of their symptoms had significantly improved or disappeared entirely.

Awareness appears to be growing, too. A wave of celebrities are talking more openly about breast implants and their health and wellness — including Victoria Beckham, Ayesha Curry, Ashley Tisdale, Chrissy Teigen and others.

A documentary that touches on the subject of BII, "Explant," is screening right now at the Tribeca Film Festival. The film follows Michelle Visage, one of the celebrity judges on "RuPaul's Drag Race." Visage, a media personality, singer, DJ and actor who was well known for her signature Double-D breasts, found that doctors didn't take her seriously when she told the specialists her immune system was out of whack. Visage experienced chronic health issues, including Hashimoto's disease, that she now attributes to her breast implants.

Awareness of BII is crucial given the popularity of breast implants. Since 1998, the number of breast augmentation procedures in the US has increased threefold; now, they are one of the most sought-out cosmetic procedures.

"The desire for breast augmentation seems so powerful regardless of what else is going on in the world," said Dr. Diana Zuckerman, founder of the National Center for Health Research. "What most concerns me is how reluctant most plastic surgeons have been to make sure their patients know the risks before making a decision."

Because breast implant technology has existed for decades, many women erroneously believe they are safe. Modern-day medical grade breast implants were pioneered in the early 1960s by a plastic surgeon duo, Drs. Frank Gerow and Thomas Cronin. Previously, doctors had used silicone material from U.S.-based company Dow Corning and injected it directly into women's chests; in Japan and elsewhere, the results were disastrous. So, the Houston-area doctors tried a different approach: silicone-filled breast implants.

Over the years, Dow Corning's implant products were exposed for unsafe practices, breast implants that frequently deflated, and lack of reputable clinical studies. Countless patient injury lawsuits followed. To restore confidence in breast implants, a number of research studies were later conducted. But the majority of these studies were funded by special interest groups that falsely touted a strong safety record.

Daruda saw her health decline gradually over a period of five years after she got breast implants, until she couldn't even work. A Canadian from Vancouver Island, Daruda was often unable to do basic routine daily living activities due to a host of health issues, including kidney damage. After doing independent research and feeling dismissed by many medical professionals, Daruda decided to surgically remove her breast implants. Since then, she says she has seen significant healing. Today, Daruda's support group and separate nonprofit both aim to provide information to women in need.

In the years after my implant, some of my symptoms mirrored women on support groups I found online, which is how I figured out I had Breast Implant Illness. While symptoms sometimes waxed and waned, I got used to experiencing a host of autoimmune and other symptoms like insomnia, brain fog, extreme breathlessness, cuts that took weeks to heal, rashes, frequent colds and much more.

But BII is no longer regarded as a myth. Many or even most doctors, including plastic surgeon Dr. Anthony Youn, believe Breast Implant Illness is real. Dr. Youn acknowledges it is a controversial topic among many of his fellow American plastic surgeons.

"If you're happy with your breast implants and you don't believe they are adversely affecting your health, then there is no need for treatment. If you are sick and believe your implants may be the cause, speak with your primary care physician and a board-certified plastic surgeon about whether explantation may be a possible solution for you," Dr Youn said. "There are many causes of the symptoms of Breast Implant Illness (BII) that don't involve breast implants, so it's often best to rule those out first," he continued.

In his 17 years of practice in the metro Detroit region, Dr. Youn, a member of the American Society of Plastic Surgeons and The Aesthetic Society, has performed surgery on thousands of women who elected to get breast implants. Anecdotally, he estimates the number patients who later returned to his practice stating they had Breast Implant Illness symptoms is an extremely small percentage.

Dr. Youn acknowledges the number of explant requests coming into his medical practice has grown since 2019. That year, the FDA held a series of hearings about whether there was a correlation between certain breast implants and a rare form of cancer called BIA-ALCL (breast-implant-associated anaplastic large-cell lymphoma). Dr. Youn notes that more scientific research is needed on Breast Implant Illness to better understand the condition.

And as for me: After the pandemic delayed my surgery, I've finally set a date with a reputable Long Island plastic surgeon to remove my breast implant. I am cautiously optimistic about healing, but realize after five years of having breast implants I may need an extended recovery. And I know my current health issues, like high blood pressure, may still need to be managed by medication even after my surgery.

Though not all women with breast implants go on to develop Breast Implant Illness, all women deserve education, informed consent, insurance coverage and most important information about potential risks. If, in 2015, there had been an FDA Breast Implant Black Box Warning (which was officially unveiled in late 2020), I honestly never would have gotten breast implants in the first place.

Pamela Appea is a New York City-based independent journalist covering health, science and intersectionality. She has written for Salon, Glamour, Parents, Wired and other publications. She is currently working on a nonfiction book on gender-based health disparities. Follow her on Twitter at @pamelawritesnyc.