Biden's Iran policy has been a slow-motion train wreck from the beginning. It's almost too late to change course 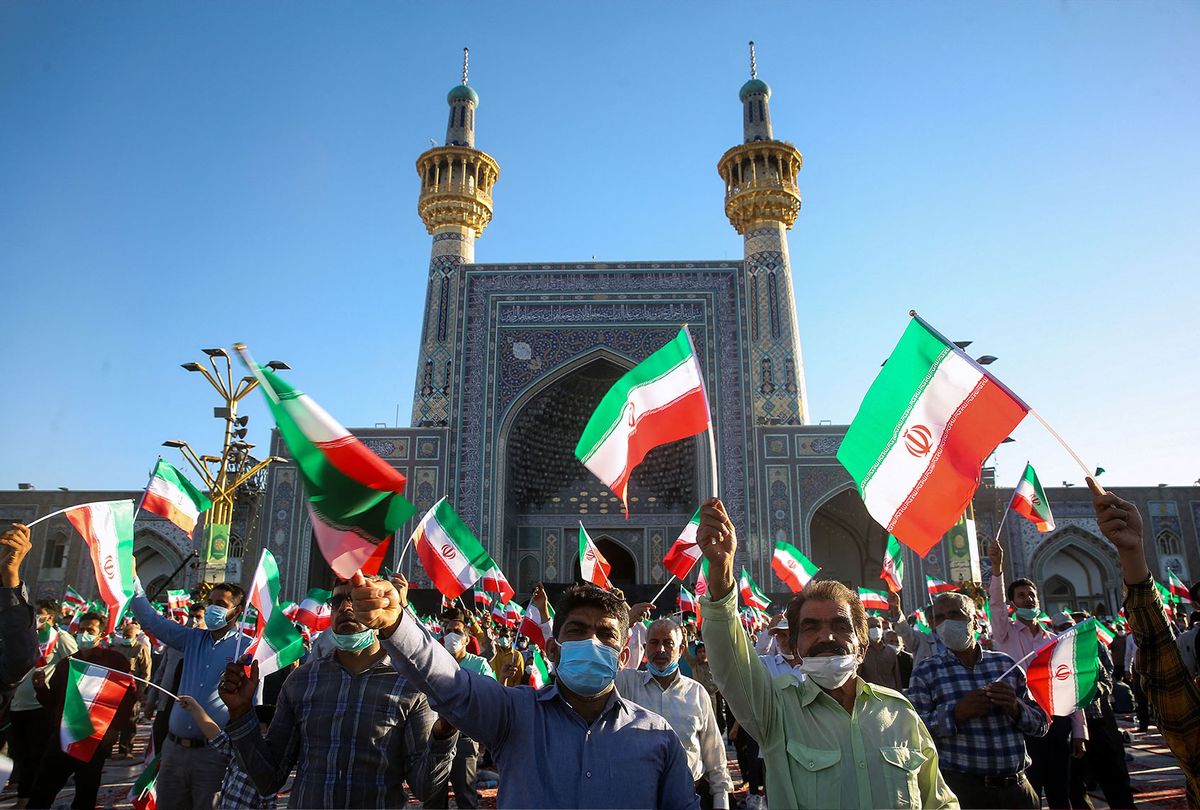 Supporters of Iran's President-elect Ebrahim Raisi cheer at the Imam Reza shrine in the city of Mashhad in northeastern Iran, on June 22, 2021. - On June 19 the 60-year-old was named the winner of the Islamic republic's presidential election, set to take over from moderate Hassan Rouhani in August. (MOHSEN ESMAEILZADEH/ISNA NEWS AGENCY/AFP via Getty Images)
--

It was common knowledge that a U.S. failure to rejoin the Iran nuclear deal (known as the JCPOA) before Iran's June presidential election would help conservative hard-liners win the election. And indeed, last weekend the conservative Ebrahim Raisi was elected as the new president of Iran.

Raisi has a record of brutal crackdowns on government opponents and his victory, although expected, comes as a severe blow to Iranians struggling for a more liberal, open society. He also has a history of anti-Western sentiment and says he would refuse to meet with President Biden. And while current President Hassan Rouhani, considered a moderate, held out the possibility of broader talks after the U.S. returned to the nuclear deal, Raisi will almost certainly reject broader negotiations with the United States.

Could Raisi's victory have been averted if President Biden had rejoined the Iran deal right after entering the White House, enabling Rouhani and the moderates in Iran to take credit for the removal of U.S. sanctions before the election? We will never know.

Trump's withdrawal from the agreement drew near-universal condemnation from Democrats and arguably violated international law. But Biden's failure to quickly rejoin the deal has left Trump's policy in place, including the cruel "maximum pressure" sanctions that are destroying Iran's middle class, throwing millions of people into poverty,and preventing imports of medicine and other essentials, even during a pandemic.

U.S. sanctions have provoked retaliatory measures from Iran, including suspending limits on its uranium enrichment and reducing cooperation with the International Atomic Energy Agency (IAEA). Trump's, and now Biden's, policy has simply reconstructed the problems that preceded the JCPOA in 2015, displaying the widely recognized madness of repeating something that didn't work and expecting a different result.

If actions speak louder than words, the U.S. seizure of 27 Iranian and Yemeni international news websites on June 22, based on the illegal, unilateral U.S. sanctions that are among the most contentious topics of the Vienna negotiations, suggests that the same madness still holds sway over U.S. policy.

Since Biden took office, the critical underlying question is whether he and his administration are really committed to the JCPOA or not. As a presidential candidate, Sen. Bernie Sanders promised to rejoin the JCPOA on his first day as president — and Iran always said it was ready to comply with the agreement as soon as the United States rejoined it.

Biden has been in office for five months, but the negotiations in Vienna did not begin until April 6th. His failure to rejoin the agreement on taking office reflected a desire to appease hawkish advisers and politicians who claimed he could use Trump's withdrawal and the threat of continued sanctions as "leverage" to extract more concessions from Iran over its ballistic missiles, regional activities and other questions.

Far from extracting more concessions, Biden's foot-dragging only provoked further retaliatory action by Iran, especially after the assassination of an Iranian scientist and sabotage at Iran's Natanz nuclear facility, both probably committed by Israel.

Without a great deal of help, and some pressure, from America's European allies, it is unclear how long it would have taken Biden to get around to opening negotiations with Iran. The shuttle diplomacy taking place in Vienna is the result of painstaking negotiations with both sides by former European Parliament President Josep Borrell, who is now the European Union's foreign policy chief.

The sixth round of shuttle diplomacy has now concluded in Vienna without an agreement. President-elect Raisi says he supports the negotiations in Vienna, but will not allow the United States to drag them out for a long time.

An unnamed U.S. official raised hopes for an agreement before Raisi takes office on Aug. 3, noting that it would be more difficult to reach an agreement after that. But a State Department spokesman said talks would continue when the new government takes office, implying that an agreement was unlikely before then.

Even if Biden had rejoined the JCPOA, Iran's moderates might still have lost this tightly managed election. But a restored JCPOA and the end of U.S. sanctions would have left the moderates in a stronger position, and set Iran's relations with the United States and its allies on a path of normalization that would have helped to weather more difficult relations with Raisi and his government in the coming years.

If Biden fails to rejoin the JCPOA, and if the United States or Israel ends up at war with Iran, this lost opportunity to rejoin the JCPOA during his first months in office will loom large over future events and Biden's legacy as president.

If the United States does not rejoin the JCPOA before Raisi takes office, Iran's hard-liners will point to Rouhani's diplomacy with the West as a failed pipe dream, and their own policies as pragmatic and realistic by contrast. In the United States and Israel, the hawks who have lured Biden into this slow-motion train-wreck will be popping champagne corks to celebrate Raisi's inauguration, as they move in to kill the JCPOA for good, smearing it as a deal with a mass murderer.

If Biden rejoins the JCPOA after Raisi's inauguration, Iran's hard-liners will claim that they succeeded where Rouhani and the moderates failed, and take credit for the economic recovery that will follow the removal of U.S. sanctions.

On the other hand, if Biden follows hawkish advice and tries to play it tough, and Raisi then pulls the plug on the negotiations, both leaders will score points with their own hard-liners at the expense of the majorities of their people who want peace — and the United States will be back on a path of confrontation with Iran.

While that would be the worst outcome of all, it would allow Biden to have it both ways domestically, appeasing the hawks while telling liberals that he was committed to the nuclear deal until Iran rejected it. Such a cynical path of least resistance would very likely be a path to war.

On all these counts, it is vital that Biden and the Democrats conclude an agreement with the Rouhani government and rejoin the JCPOA. Rejoining it after Raisi takes office would be better than letting the negotiations fail altogether, but this entire slow-motion train-wreck has been characterized by diminishing returns with every delay, from the day Biden took office.

Neither the people of Iran nor the people of the United States have been well served by Biden's willingness to accept Trump's Iran policy as an acceptable alternative to Obama's, even as a temporary political expedient. To allow Trump's abandonment of Obama's agreement to stand as long-term U.S. policy would be an even greater betrayal of the goodwill and good faith of people on all sides, Americans, allies and enemies alike.

Biden and his advisers must now confront the consequences of the position their wishful thinking and dithering has landed them in, and must make a genuine and serious political decision to rejoin the JCPOA within days or weeks.