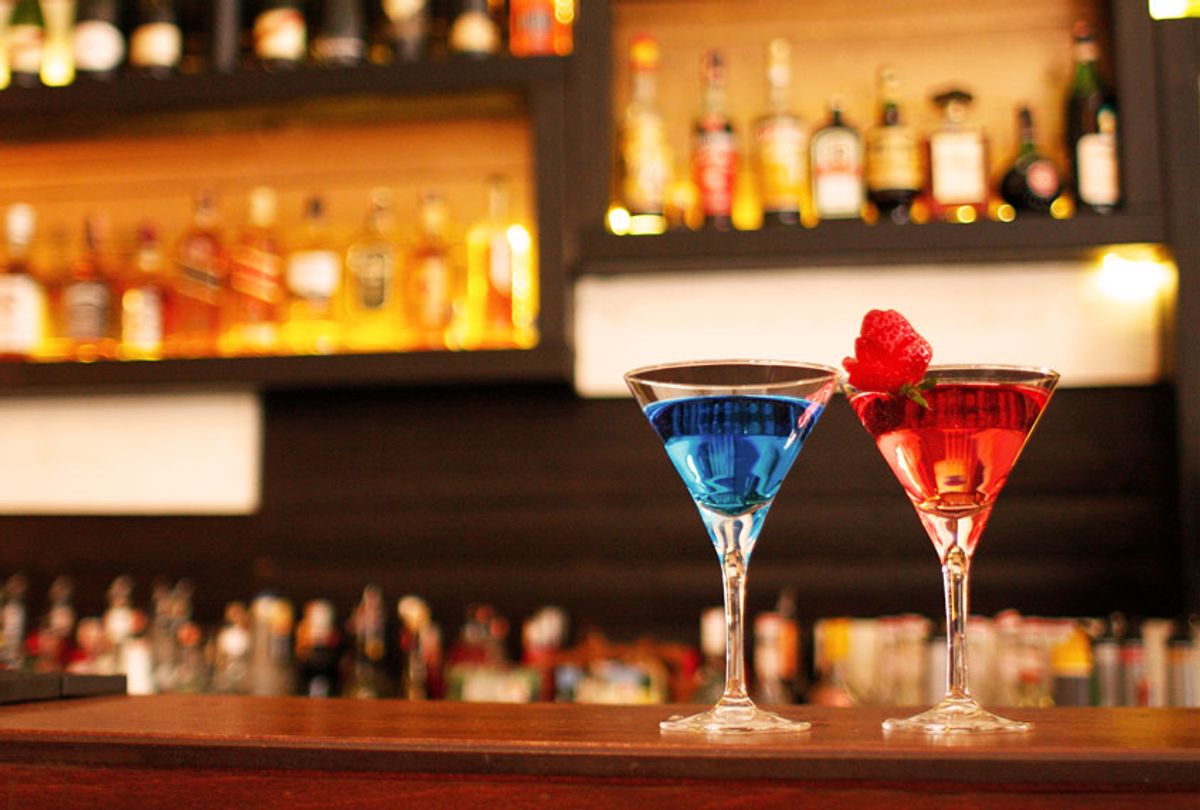 Cocktails at the bar (Getty Images)
--

Welcome to How to Be Social Again: The No-Stress Guide to Returning to Society. In this mini-series, you'll get a brush-up on everything from invitation etiquette to navigating bars again — plus, a drinks menu-planner for any party size and an ode the most underrated of gatherings, the coffee date.

I knew I wanted to go to Sharlene's for my first drink inside a bar in over a year. The Flatbush Avenue mainstay has been my local spot for nearly a decade — a place where I'd spent a lot of good times, a few bad ones, and a handful of very odd moments. So when I walked in, I felt a mix of joy and trepidation. I was happy to be back, but I was also maskless. I'd received my second dose of Moderna three weeks earlier, but still, it felt strange. It also felt off since the bartender was wearing a mask and I'd taken mine off. I made sure to ask him if it was cool with me not wearing a mask. "Of course," he said. "I got my vaccine. I'm just still wearing this for now."

People are starting to go back to bars and it's going to be weird. That's really the only way to put it. We're going to have to get used to being around people again, to seeing people with their masks off, and, most likely, watching people getting sloppy really fast because they haven't sat drinking in a bar for over a year. Some things will go back to the way they were — people will talk, have awkward hookups, they'll laugh, maybe cry, maybe both at the same time — but things will likely be different, at least for the next few months. We're all trying to move past a terrible time, but for people in the service industry, it was especially tough.

"I think one of the most important things a guest can do is be cognizant of the trauma that is surrounding our industry and its professionals, which has been and will continue to be for a while," says Jason Sorbet, beverage director at The Chloe in New Orleans.

When you walk into a bar, it's likely the people working there saw their lives upended during the pandemic. As Sorbet points out, there "was a huge, dark cloud over a lot of our lives — myself included — where people lost their careers, support systems, businesses and life's work," because of COVID-19. That's not to say it wasn't tough for everybody, but people in the service industry likely faced one of two options over the last year: lose their income or put themselves in harm's way in the days before a vaccine was available. You should always treat somebody making your cocktails with the same sort of respect you'd want to be treated with, but now you should do it with a heaping side of empathy.

Empathy and honesty. For one, if you don't have your shot, you shouldn't put other people in harm's way. The problem with asking for proof of vaccination, as one bar owner told a New York Times editor about why very few establishments are doing so, is that "without mandatory enforcement, it's too risky. We're barely back on our feet." If you're not going to get the Johnson & Johnson, Pfizer, or Moderna, you probably shouldn't be out ordering that Old-Fashioned.

And then there's the financial side of things. People took a hit. Can you imagine not getting paid for a month, let alone over an entire year? It might not seem like much, but if a bartender pops open a beer for you, tip an extra buck. The same goes with the barista who makes your coffee or the people working in restaurants. Everybody starts to do that for the summer and maybe we can help a few hard-working folks get back on their feet and show them how much we appreciate what they do. If you can afford to tip a little more, then by all means you should.

How will all this affect your bar-going experience? That depends a lot on where you are, of course. Driving through Wisconsin last week, I noticed nothing had really changed at any of the bars I went to. Down towards Chicago, things were different. For one, some places were still keeping different hours than pre-pandemic times. While it's true things are opening up and the CDC is saying those of us with vaccines shouldn't worry too much about going inside, there is probably enough lingering doubt or just the fear of spending time around strangers again that means it will take a little time for bars to get up and working at a normal pace. Bars have already lost enough money that owners likely want to be careful. Give them time to adjust just like you probably need time to get used to things hopefully getting back to normal.

And then, back in Brooklyn this week, I stopped at Bearded Lady in Prospect Heights. After the bars were allowed to open back up in the middle of last year, Bearded Lady became my go-to spot. Today, I look at it as my barometer for how things are in the bar world. They re-introduced indoor seating, but it's limited. For outdoor seating, you still pull up the menu with a QR code, a system bars across the country pivoted to during the pandemic. I wonder if any of these changes are permanent. Obviously, with space being expensive in a city like New York, the tables will eventually come back inside, but when? Will the QR codes stick around? Will we still be able to buy drinks from bars and walk around with them like we've been able to in some cities?

"Who knows anymore? It's all so up in the air," the server at Bearded Lady told me. Every bar person I ask basically says the same thing. Just like us, they're trying to figure out what a post-pandemic future looks like while also trying to figure out how to cope and move on from the tough past year and a half.

"We learned in 2020 that it is a genuine privilege to be able to go out, sit down with friends and loved ones or strangers, rip through a bottle of great wine, share a family-style meal, and be able to lock in that memory to look back on," Sorbet put it. "We almost lost that."