The tech used in major COVID-19 vaccines is regarded as a "breakthrough." HIV vaccines could now be in the cards 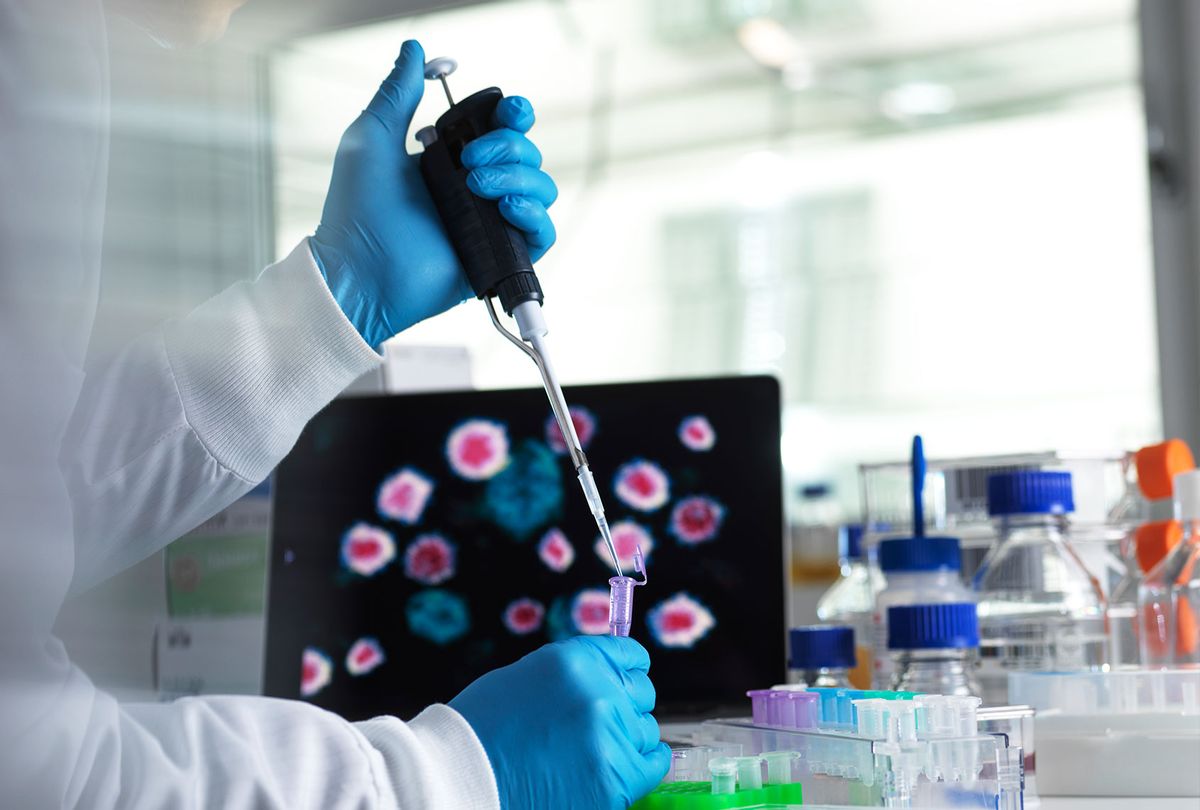 Scientist pipetting a sample of a new drug formula into a vial during a clinical trial with the infectious disease on the computer screen. (Getty Images)
--

One of the unexpected ripple effects of the global pandemic is how it catalyzed medical breakthroughs. Most prominently, the same technology used in SARS-CoV-2 vaccines has the potential to improve treatments for diseases like cancer and HIV.

Earlier this June, President Biden's medical adviser Dr. Anthony Fauci noted that the extraordinary success of the messenger ribonucleic acid (mRNA) COVID-19 vaccines had given new hope to HIV vaccinologists. In fact, researchers across multiple disciplines have renewed enthusiasm based on the techniques advanced during the pandemic. Such a vaccine would be an astonishing achievement in vaccinating against a retrovirus, HIV, that has eluded scientists for decades.

Although COVID-19 vaccines are the first mRNA vaccines approved for human use, RNA-based vaccination goes back twenty-five years. In the 1990s, researchers in France used RNA to encode an influenza antigen — meaning a substance that provokes an immune response — in mice. Unfortunately, hurdles such as lack of funding and attention, obstructed the advancement of this innovation — until now.

Over the past year, thanks to funding from the government and private sector — and the global cooperation of the scientific community — multiple mRNA COVID vaccines were created in under a year. The previous record for vaccine development was four years, (for the mumps), meaning the rapidity of this vaccine's creation is a remarkable achievement.

mRNA vaccines differ from their predecessors in a few key ways. Traditional vaccines typically inject patients with either weakened or dead viruses, which then generate antibodies in the immune system, and thus train the immune system to recognize viruses the next time they invade the body. However, the COVID-19 mRNA vaccine injects a snippet of messenger RNA, which enters the patient and causes their cells to manufacture a small piece of the coronavirus called the spike protein. In artistic depictions of coronaviruses, the spike protein is the little points on the exterior of the virus that stick out like spines on a sea urchin. Once the body begins manufacturing these spikes, the immune system makes antibodies that recognize it. Later, if or when the actual virus enters the body, the antibodies will recognize the exterior spikes and set about destroying the intruding virus.

Scientists regard mRNA vaccines as a breakthrough that will usher in a new era of medicine — a potential weapon against numerous other diseases, as Dr. Jeffrey B. Ulmer, the former head of preclinical research and development at GlaxoSmithKline's vaccine division, explained to Salon.

"In principle, mRNA vaccines could address any infectious disease or cancer target that would require an immune response against a protein antigen," Ulmer says. "So in principle everything is on the table in terms of the ability to use mRNA." (There is one caveat, Ulmer noted: certain bacterial pathogens would not be effective against the vaccine.)

However, "everything on the table" does includes cancer. Indeed, mRNA vaccines could theoretically be programmed specifically for a patient's cancer cells, meaning the creation of personalized therapies for any individual with cancer. Since cancer mutations are unique and specific to every human being's specific cancer, the mRNA vaccine would be tailored to a given patient. This is possible because cancer cells have unique proteins on their surface, and the mRNA vaccines can be programmed for those exact proteins to generate antibodies. This way, doctors hope to prepare the patient's immune system to recognize the cancer and kill it.

Pharmaceutical and biotech companies already see the potential in these new treatments. For example, BioNTech is testing mRNA vaccines aimed at overexpressed but unmutated proteins, and also signed a strategic collaboration deal with Regeneron Pharmaceuticals for the treatment of melanoma. Moderna is similarly building mRNA therapies that instruct the immune system to recognize mutations made by cancerous proteins in a gene called KRAS.

Another area that has seen significant advancement is the research field is HIV treatments. Researchers at Scripps University in California have developed a preliminary vaccine that shows promise for preventing HIV infections. The vaccine's goal is to stimulate the immune system to produce "broadly neutralizing antibodies," which are meant to attach to the HIV spike protein that enters the cells and neutralize them.

The companies ConserV Bioscience and eTheRNA announced a collaboration in March to deliver such a mRNA HIV vaccine. Additionally, the International AIDS Vaccine Initiative (IAVI), a global not-for-profit working to accelerate vaccine development for HIV and AIDS, recently revealed that its HIV vaccine was able to induce the correct immune response in 97 percent of participants in early clinical trials. They are now partnering with Moderna to develop mRNA vaccines that produce the same beneficial immune cells.

Yet HIV and cancer aren't the only disease treatments that could be improved by this new protocol.

Since mRNA technology is able to exploit the body's own genetics, it can also improve the vaccines that we already have. For example, every flu season, manufacturers decide which strains of influenza to target months before the annual season begins. Due to this, vaccine efficacy is only around 50 to 70 percent. But mRNA-based vaccines can be manufactured very quickly, and so far often have higher efficacies. BioNTech and Pfizer have separately been working on a "universal" mRNA-based flu vaccine that they hope will eliminate the need for seasonal influenza shots and only require a shot every five years. Similar approaches have also been proposed to build defenses against other diseases, including Dengue, Zika, Hepatitis C, and Malaria.

However, these exciting new developments don't come without their own challenges. The raw materials needed for mRNA vaccine development and storage are very costly. For example, the Pfizer–BioNTech COVID-19 vaccine must be stored at −70 °C, and requires special refrigeration for transport and storage. Though this tech has great potential, it is entirely possible that the prohibitive cost of its development may force companies to abandon the research once the current crisis subsides.

Furthermore, some mRNA vaccines have required two doses to be effective — and it's conceivable that many will simply not bother to get the second shot. In fact, we have seen that millions of Americans are not getting the second doses of their COVID-19 vaccines.

Another hindrance may be side effects. 80% of those who received the Moderna COVID-19 vaccine in clinical trials had some type of reaction to the shot. Symptoms were temporary for the vast majority of the population, but included fatigue, muscle pain, and headaches.

Even though expectations are high, researchers have a long road ahead of them as any future mRNA vaccines beyond the coronavirus are still in the early phases of development.

Still, Dr. Ulmer is "absolutely" bullish on the potential for mRNA vaccine technology to treat diseases such as cancer and HIV. "I think that there are obviously difficult challenges that we faced for a long time, but the success that we've seen in the RNA vaccine for COVID gives us some hope that maybe this is a technology that is more effective," he said. "I think the next several years will see a lot of activity with this technology at hand and its application to other infectious disease targets and cancer — and that's already ongoing."

"Only time will tell," he added.

This story was updated on June 28 at 11:13AM PST to add additional details about the International AIDS Vaccine Initiative's HIV candidate vaccine.

Zoe Malik currently works as a News Producer at SamBee. She is also a frequent collaborator for the YouTube channel "The Try Guys" and writes feature articles for Star Trek and Looper. She formerly worked at NPR's LatinoUSA as a Researcher and Field Reporter. Before pursuing writing Zoe was the Science Researcher Coordinator at NYU Langone Medical Center.