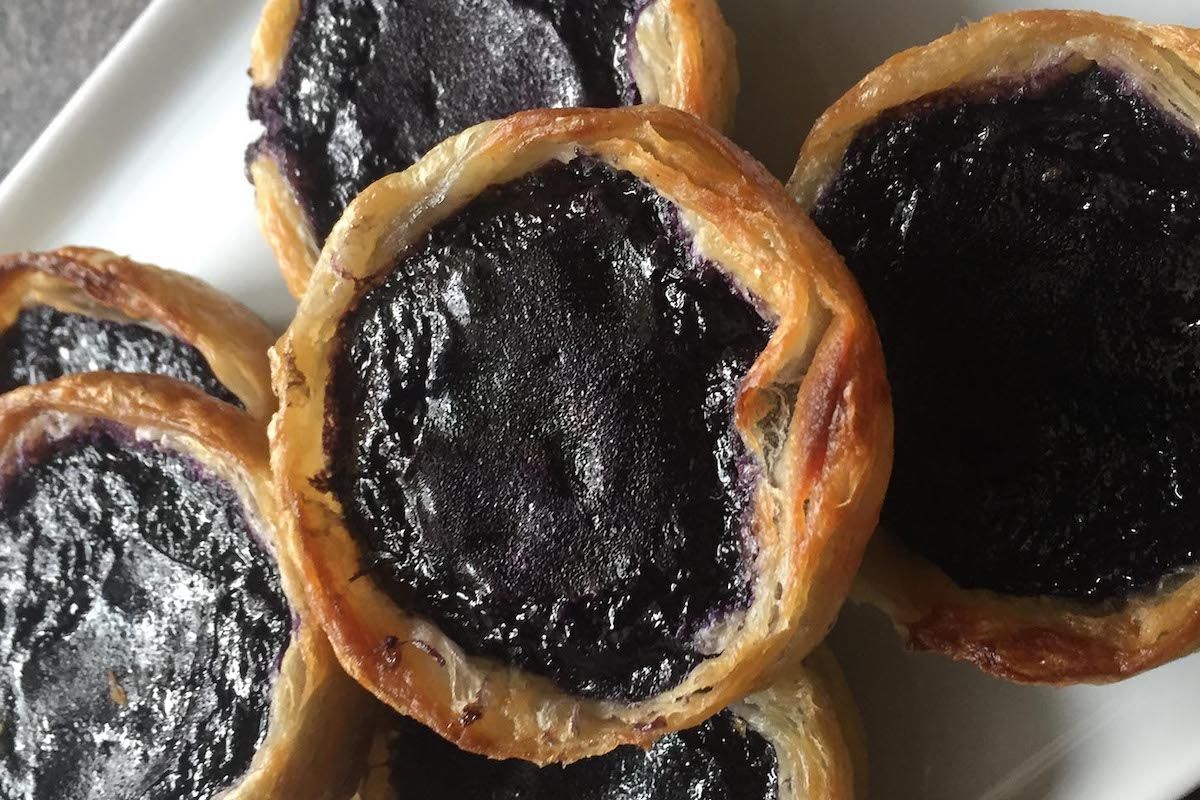 As I write, I'm part way through my fifth go at Portuguese custard tarts or pasteis de nata. This is what happens to chefs. We get something in our minds and we can't let go. Now I'm immersed and I'm not giving up until I win. And by win, I mean, feel proud enough of the product that I can share it with you.

This exploit began as I pondered current trends in pastry. As a chef and business owner, it's important to keep up with what is happening in the pastry world. Some believe the secret to success is riding trends, but I believe it's keeping one step ahead and innovating as much as possible.

Recently I started to notice gorgeous purple dessert treats creeping along my Instagram feed: ice cream, cupcakes, doughnuts and cakes. Funnily, I hate purple food coloring. Students always want to use it, but it always lets them down. It's never truly purple but rather tones of blue or gray, or something else completely. It gets muddy when you try to mix your own shade and it famously fades. Once, after covering three tiers of cake in purple in The Art of Cake Decorating course at the Institute of Culinary Education, a pastry student came back the next day to find each of them a different shade of blue. While it may be the color of kings, purple is not the color of food artists. So when I saw these gorgeous shades of purple, I was even more impressed by the natural method causing the color: using ube.

Ube is a purple yam native to Asia and the Philippines. The fresh tuber has a gorgeous deep tone of a pinkish purple, which changes as heat and moisture are applied. The flavor of ube is quite unexpected. It's much sweeter than your average sweet potato and has a super nutty aroma that took me by surprise when I first encountered it. And it's full of fiber and vitamin A, so it's good for you. A staple in the Philippines, it's very hard to find in the U.S., fresh or in season.

Forms of ube that can be easily found online are powdered, jam and extract. The powder has a gorgeous lavender color, while the extract is a super dark, vivid purple. The jam is made from the fresh yam but has sugar added and a somewhat grainy and gummy texture. While some may love it spread on toast, the ube jam isn't the right choice for a recipe where ube is the star.

I procured the extract and the powder, and for good measure, I wanted to throw in something fresh so I included the Okinawan sweet potato in the mix. Not true ube, this is the one fresh purple sweet potato that can be found easily in New York City grocery stores. 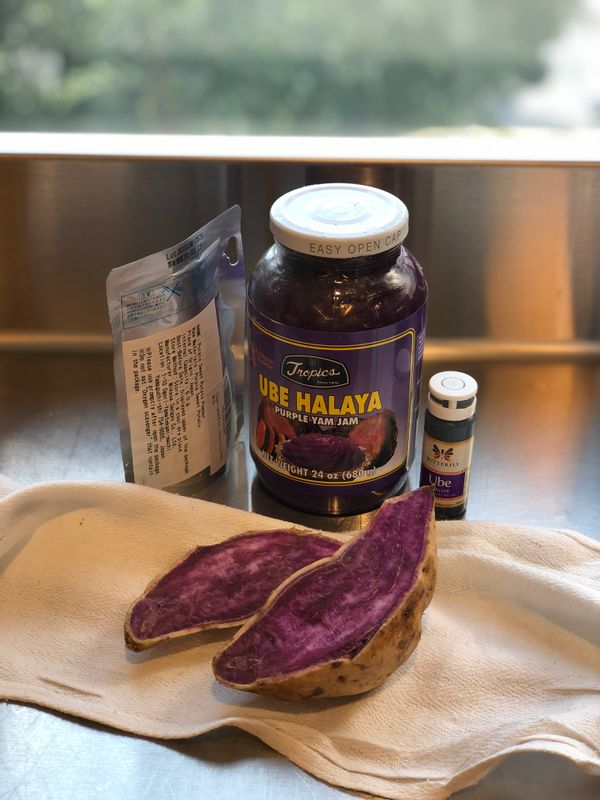 Penny experiments with ube powder, jam and extract, plus an Okinawan sweet potato. (Photo courtesy of the Institute of Culinary Education)

There were so many things I wanted to make with ube, but finally, I limited myself to whoopie pies and a version of the Portuguese egg tarts, which are trending. I've been hearing about the tarts for a while now, but of late they have been flooding my consciousness. Look up #pasteisdenata on Instagram and you'll see what I mean.

Full disclosure, I have never had these tarts from the source. And by source, I mean Fabrica de Pasteis de Belem in Lisbon, where the pastries originated and where their secrets are kept under lock and key. The recipe is a trade secret of the Lisbon bakery, and while a couple of tips have slipped out, the bakery is so protective about it, the makers may lean on exaggerations to keep anyone from figuring out their methods. I like a challenge.

My attempts at making these began with David Leite's recipe on Leite's Culinaria. He had gone to the source, tried his best and didn't get as far as he would have liked. My goals were reasonable: I just wanted a yummy, blistering custard tart that I could use as a vehicle for the aromatic, sweet and nutty ube.

Several of the instructions on Leite's Culinaria struck me as unusual. It was a laminated dough but with soft, mushy butter. The dough was rolled into a spiral and pressed into pans. It was a super thin custard with milk, egg yolks and a cooked sugar syrup, and it was baked at 500-550 F! I could understand a version of puff pastry being cooked that high, but no baked custard I'd ever seen has been cooked at that temperature. I worried that the custard would be set but the pastry not cooked, and that is exactly what happened the first time around. The butter seeped out so much that it covered the bottom of the oven. For the next try, I chilled the formed dough before filling and baking, and put the convection on high fan. This helped. The tarts were edible, if not a bit sweet for me.

For the next try, I thought: If it's a laminated dough, why not just use quick puff pastry? Many of the second-tier versions of this recipe called for pre-made puff pastry. Then I focused on the ube custard: one with the jam and one with a combination of powder and extract, and tried them using freshly made quick puff. Disaster number two: The quick puff was so puffy that it pushed the custard up and out of the dough cups and underneath, making a sticky mess, while it stubbornly refused to fully cook at the base. I tried to use some of the ube powder to replace the flour in the custard recipe, and this version of the custard never set. And forget the ones in the middle of the muffin pan, they barely baked at all.

Chef Penny shares her repeated attempts at the recipe. (Photo courtesy of the Institute of Culinary Education)

With the next go around, I left behind the idea of using the jam or fresh sweet potato. They created a custard with a less-refined mouthfeel and instead, I settled on using a combination of the powder and the extract. I stubbornly stuck with the puff pastry one more time, I had some left after all. It was delicious and crispy but too thick for the tender custard.

For the next attempt, I went back to the soft butter version of the pastry. I heard rumors of lard being used in the dough, either a little or all, and wanted to see if that made it better. I swapped 10 percent of the butter for lard and beat them together. The lard left me with a dough that was super crisp but felt greasy and had an almost chewy texture, so no on the lard.

Instead of rushing it, I learned to let the dough sit overnight in the refrigerator, an absolute must. I perfected the finger motions of filling the cups. The custard was delicious, not too sweet and just a bit savory, the only thing left to perfect was the bake. A new cupcake tin, baked this time for nine minutes at 500 F with low fan convection. They looked perfect from the top, but still the bottoms were soft and saturated. I wondered if in Lisbon, they baked them directly on a deck oven, so I tried a heated pizza stone. Under-baked bottoms persisted.

And then it occurred to me: the original ones are made in small tin pans. In my variety of tests, I had used different types of cupcake pans: dark bottom, thicker, thinner. This had a direct effect on how the pastry baked, so using thin individual pans, baked on a hot sheet tray or heated pizza stone is the way to go. Does this mean you have to buy more tools to use only one time? No. Use smaller muffin tins with less dough and only use the outside cavities, avoiding the centers where there is too much insulation to cook evenly.

With no struggle at all during the waiting periods, I made delicious, beautiful ube whoopie pies with a chai cream filling. A good snack for the fight! And now, when I want to make edible items a beautiful purple, I know where to turn. Ube is truly a stunning, versatile product to make your baked goods shine. Here's a recipe for experimenting with it. 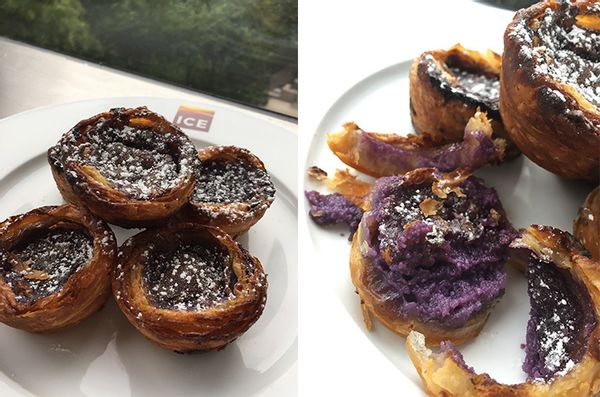 To make the dough:

To complete the tarts: