A brief history of the American cookout

With origins dating back to the 1500s, cookouts — both grilling and barbecuing — are a huge part of American life 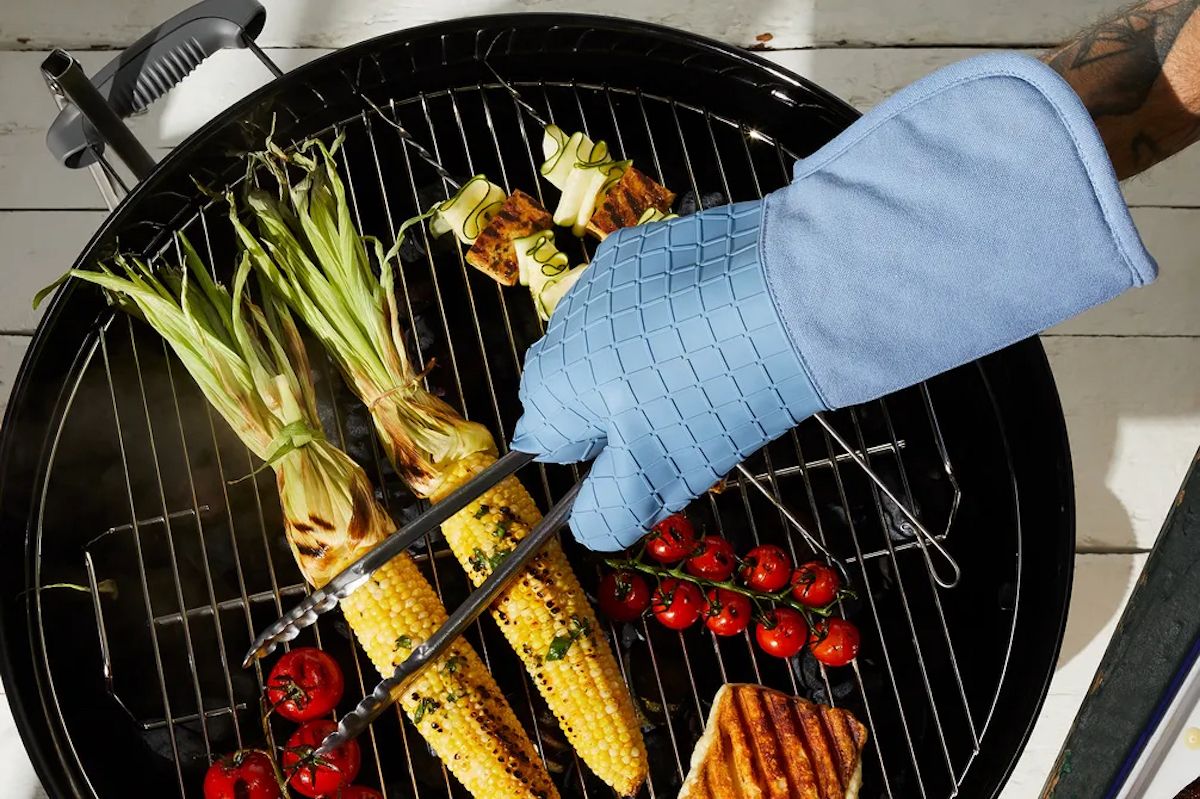 There's something almost spiritual about watching someone cook with fire: the glowing red charcoal pulsing with energy; the slow, controlled breaths sending ash fluttering into the air. Perhaps we tend to huddle around the flames to watch — whether we know it or not, it's an experience that tugs at our shared history. From a backyard hot dog in New Jersey, to razor-thin bulgogi in Seoul, to Jamaican jerk chicken, cooking with fire draws crowds among myriad cultures.

Jim Auchmutey, author of Smokelore, notes that grilling dates back to the Paleolithic era, when humans first cooked meat over open fire. There were no fancy rubs or sauces, no direct or indirect heat. Nonetheless, Dr. Richard Wrangham, a professor of biological anthropology at Harvard University, claims that the discovery of heating food altered the course of human development. In Catching Fire: How Cooking Made Us Human, Wrangham writes that "cooking was a great discovery not merely because it gave us better food, or even because it made us physically human. It did something even more important: it helped make our brains uniquely large, providing a dull human body with a brilliant human mind." Before humans discovered cooking, our ancestors spent most of their time and energy chewing raw fibrous plants and vegetables. But their jaws and teeth were no match for raw meat. To make chewing easier, they used stone tools as "second teeth" to break down animal flesh. This was still a lot of work. According to Wrangham, once humans began cooking with fire, they were able to consume more calories with less time and effort, which supported the development of larger brains.

In 1492, Spanish explorers led by Christopher Columbus sailed across the open seas with hopes of grand discovery, looking for riches, spices, and a direct route to Asia. Instead, they landed in the Caribbean, where they came across an indigenous tribe known as the Taíno slow-cooking on wooden frames. It was something they had never seen before. The explorers traveled north toward the modern-day U.S., carrying with them this fascinating cooking technique, which they called "barbacoa". Once the term and practice landed in what is now the southern U.S. and spread around the areas of Virginia, the Carolinas, Alabama, and Georgia, "barbacoa" gradually turned into "barbecue". (The term barbacoa is of course still used in present-day Mexico, describing a style of slowly steam-roasting large cuts of meat in a large oven dug into the earth.)

It should be said that grilling and barbecuing, though the terms are often used synonymously, aren't technically the same thing. (Just ask North Carolina Democrat Cal Cunningham, who was roasted on Twitter for incorrectly using "BBQ" during his senate race in 2020. He was not elected.) Grilling is cooking directly over a heat source, suitable for quick-cooking meats like hamburgers and hot dogs. Barbecuing is characterized by the low-and-slow process that does wonders transforming larger, tougher cuts, like ribs and pork shoulder, into pull-apart-tender meat.

The specifics and terminology might be up for debate, but it's not really about what's being cooked, or the best way to cook it. It's about the experience, which, incredibly, hits each of the senses. The sight of the blaze, how it transforms ingredients from raw to charred in minutes. The feeling of its heat on your arms and face as you tend to the food. The smell of smoke, the sound of the crackling flames. And the taste — well, that's the grand finale.

While meat is indeed cooked over fire all over the world, the outdoor cookout has certainly become an American pastime, even a patriotic custom — from the Fourth of July to Labor Day, national holidays often seem to be celebrated around the grill. The tradition is actually rooted in history, dating back to the nation's origin story. Auchmutey notes that barbecues were organized as far back as the Revolutionary War, by American militia. Although there wasn't a cookout at the first Independence Day celebration, it didn't take long for barbecuing to become a holiday tradition. Robert F. Moss, author of Barbecue: The History of an American Institution, explains that cooking over smoke and flames on a regular basis took root in the American South in the beginning of the 19th century; from there, it spread like, well, fire. Barbecues were a way to gather and celebrate unified values. As Moss states, "one of the most common expressions of these values occurred on the Fourth of July, and the barbecue became the traditional way to celebrate the country's independence and egalitarian principles."

Enslaved African Americans played a significant role in the success and spread of barbecue throughout the U.S. According to Auchmutey, "barbecue and slavery took root in America at about the same time, and they spread across the South in tandem." Historically, it was the enslaved that did the hard, unpaid work when it came to barbecue events. Hours of labor were spent digging trenches, chopping wood, monitoring coals, and cooking the meat. Because of this, barbecue became a major part of Black American food culture. Black Americans' contribution to the culinary art and tradition has progressed over time, spanning generations, and is still recognized today. Dr. Jessica B. Harris, culinary historian and expert on the foodways of the African diaspora, notes that "as Black barbecue masters spread across the South and Midwest, their mop sauce evolved, and so did their marinades, rubs, and barbecue sauces." Further, Harris notes that while African American expertise in barbecue is often acknowledged, few books on the subject have been published—until now, noting historical texts like Adrian Miller's Black Smoke: African Americans and the United States of Barbecue and debut cookbooks from Rodney Scott and Kevin Bludso.

The concept of using barbecues as a platform to gain military support continued during the Civil War. Though the country was so divided, somehow, once the fighting ended, barbecues brought veterans from the North and South together for peaceful reunions.

War wasn't the only business that saw the benefits of barbecue. The smoky setting was often used as a campaign device. Moss explains that during the Colonial era, this was known as "treating," and it involved bribing voters with copious amounts of meats and booze. This was technically illegal, though generally accepted. According to Moss, this tactic "was widespread and, though practiced discreetly, became an indispensable component of an election campaign." Even George Washington wasn't against treating when running for the House of Burgesses in 1758.

It was Andrew Jackson who officially linked barbecues to politics. He often used barbecues as a stage to promote his policies, and hosted the first White House barbecue in 1829. Jackson eventually ended up on the grill himself, featured in an editorial cartoon roasting over a fiery pit labeled "public opinion."

But really, isn't any meeting with information overload always better with food? The Polk County Steak Fry (which is actually a giant cookout, so-named after a colloquialism for grilled steak) is the largest organizing event for Democrats in Iowa, and practically mandatory for those running for president. At 2019's event, Joe Biden and Kamala Harris took turns at the grill, as did Pete Buttigieg and Senator Elizabeth Warren (even Senator Cory Booker, a vegan, flipped meatless patties). Though he wasn't grilling at the time, it's near impossible to forget when Senator Mitt Romney declared his "favorite meat is hot dog" (and his second favorite meat "hamburger") at a campaign dinner in 2018, which made such an impression it swiftly became a meme—and perhaps even helped him win his senate race later that year.

Historic leaders have long sought to leverage the power of the American cookout, even after election, to continue selling optimism. George Washington was known to attend barbecue all-nighters. Ronald Reagan threw a Fourth of July cookout on the South Lawn of the White House for three years starting in 1981. In 2009, Barack Obama grilled at the White House alongside Bobby Flay. When discussing the proper way to grill a steak, Obama joked, "If you end up flipping twice, that means that you can't really grill."

Individually (as they technically are), grilling and barbecuing each have a history uniquely their own. Barbecuing was a centuries-old tradition, whereas what we now know as grilling took off in the 20th century. At first, grilling was reserved for campsites. At the turn of the century, the Sackett's Camp Broiler was the outdoor gear of choice. According to a 1909 issue of The Outing Magazine, this wire contraption combined "a broiler with a level standard for coffee-pot and skillets." Another outdoor pamphlet reported that its "legs do not lock in place, and hence are of little use on stony or mushy ground." Certainly not the hefty grills we know today.

It was actually a camping trip hosted by Henry Ford that inspired the idea for charcoal briquettes. Around 1918, Ford purchased 313,000 acres of timberland to house production facilities for Ford Motor Company and generate lumber for the Model T; it also created a lot of wood waste — and no profit. With a little scientific help, he turned the scraps into charcoal briquettes. By the 1930s, the Ford Picnic Kit, a Model T accessory that bundled a portable grill with charcoal briquettes, was released to the public.

Remarkably, war wasn't done shaping the American cookout quite yet. During World War II, the Army called on Coleman Company to design a compact burner for American soldiers. The 5-pound Pocket Stove was born. Postwar, there was a mass migration from cities to suburbs. Many veterans settled down with their families, replacing battle and dinner cooked on pocket stoves with white picket fences and afternoon cookouts with neighbors. Outdoor brick barbecue fireplaces and grills swiftly became prized accessories in the 1950s and 60s.

With impeccable timing, the iconic Weber grill debuted in 1951 and shot right to the top of the market. The Grilling Encyclopedia claims it's "the world's most popular grill." Even Ford couldn't beat it. Magazine ads, cookbooks, and popular television shows all colluded in the effort to sell the same wholesome story: Grilling is backyard family fun now. As Auchmutey writes, "one indication) that barbecue was going national came when it made the cover of The New Yorker in 1950." Brands like Miller High Life and Coca-Cola took the opportunity to cash in on this new cultural trend. Cookbooks like the Better Homes & Gardens Barbecue Book and The Master Chef's Outdoor Grill Cookbook coached users on how to host a successful grilling-centric gathering. In 1957, I Love Lucy aired the "Building a Bar-B-Q" episode on evening television. Even the music industry made its link to the American cookout. Columbia Records released a vinyl album by Peter Barclay and His Orchestra, called Barbecue (a perfect outdoor playlist).

Up until this point, America was either in a war, recovering from one, or somewhere in between. Suddenly, areas of the country took a collective deep breath: Every warm weekend, it seemed many Americans, regardless of socioeconomic status, were taking a moment to step outside, gather, and eat around an open flame. Though marketing would place focus on leisure, the sense of community present at a barbecue probably wasn't so different from what the soldiers felt in the Revolutionary War, or even our primitive ancestors. All these years later, when the weather gets warm, we're still doing the same thing.