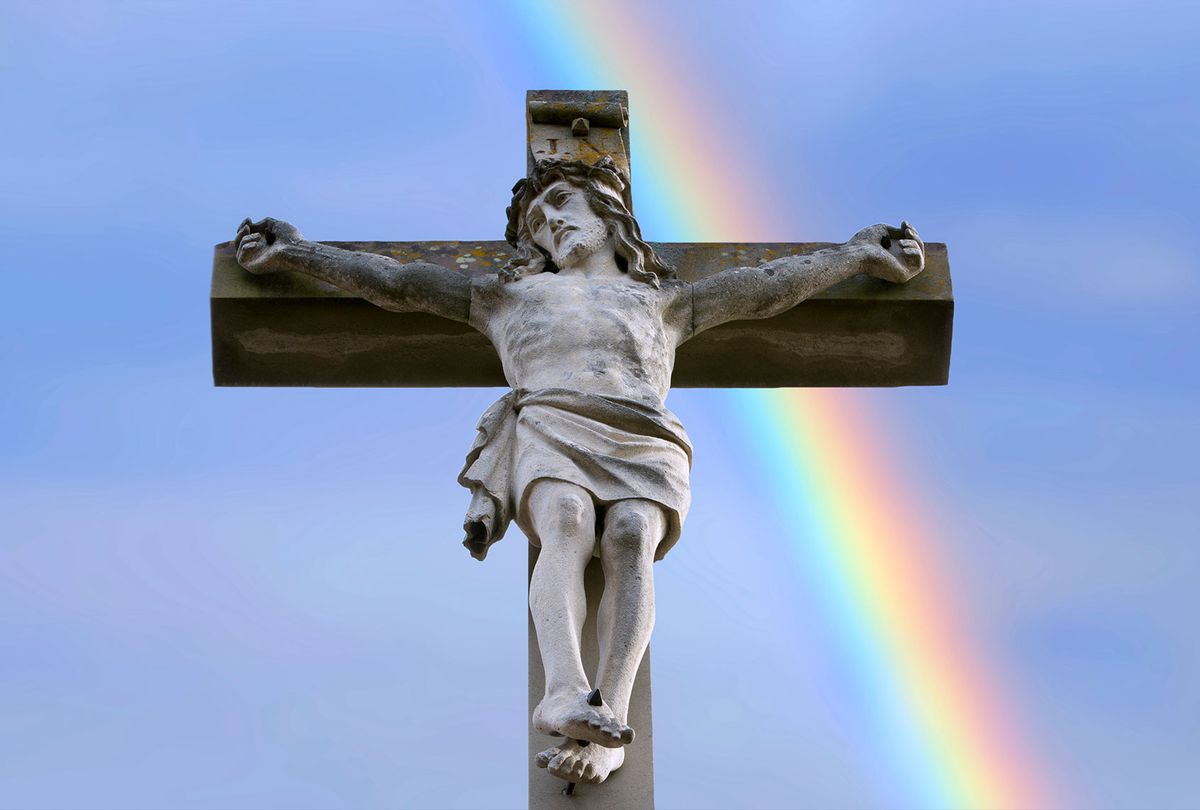 Rainbow behind a stone cross with Jesus (Getty Images/Werner Images)
--

Since the 1970s, white American evangelicals – a large subsection of Protestants who hold to a literal reading of the Bible – have often managed to get specific privileges through their political engagement primarily through supporting the Republican Party.

In the 1980s, President Ronald Reagan symbolically consolidated the alliance by bringing religious freedom and morality into public conversations that questioned the separation of church and state. In 2003, President George W. Bush signed the Partial-Birth Abortion Ban Act into law. In October 2020, President Donald Trump appointed a conservative Christian, Amy Coney Barrett, to the Supreme Court, and went on to win 80% of the white evangelical vote in the following month's election.

Trump went so far as to appoint a faith consultant board composed of influential evangelical leaders. They included Paula White, a well-known pastor and televangelist; and James Dobson, founder of Focus on the Family, a leading organization in evangelical efforts to embed "family values" into politics. These panel members heralded gestures by Trump, such as signing the "Presidential Executive Order Promoting Free Speech and Religious Liberty," which targeted enforcement of the Johnson Amendment, a 1954 tax law requiring houses of worship to stay out of politics in order to remain tax-exempt.

Although it's debated what specifically constitutes an evangelical, many agree that they are conservatives who are highly motivated by culture war issues like abortion, same-sex marriage and sexuality.

But even though evangelicals are often presented as monolithic in the media, current research signals a more complex picture.

Leaving the faith versus reforming from within

My research consists of hours of participant observation within younger evangelical faith communities, along with 50 in-depth, qualitative interviews with individuals who were raised in the politically charged evangelicalism in the southeastern United States, a region dominated by evangelicals.

Taken together, this research indicates increasing disaffection among white millennial and Gen X evangelicals with the cultural and political preoccupations that have strongly motivated their parents and grandparents. There is a growing number of "Exvangelicals" who disavow their previous stances on same-sex marriage, race and sexuality.

Evangelicals, often citing the biblical text, typically maintain that marriage is between one man and one woman. Over 75% tend to worship in racially segregated congregations and favor gun rights and ownership more than other faith groups.

But my interviewees tend toward intense critiques of their previous religious tradition, as well as rejecting the evangelical faith completely.

My research reveals communities of younger evangelicals who are expanding their religious boundaries and rethinking their stances on culture war issues, as well as questioning the merits of the culture war.

These younger evangelicals are trying to reform their communities from within the tradition as loyal but highly critical members. Sometimes these groups are called "emerging evangelicals" or "progressive Christians," with some debating whether "evangelical" as a label is redeemable.

I observed several younger evangelicals working within their religious communities to encourage acceptance of those outside of the Christian tradition as co-religionists on similar faith paths. They herald interfaith interactions as positive. One interviewee proudly detailed to me how her church partnered with the local imam and Muslim community to educate each other on their religious practices and volunteered together at a local food bank. This kind of attitude typically is resisted by their older evangelical counterparts, as I learned in previous research. Many traditional evangelicals believe that their faith is the sole path to religious redemption, and interfaith cooperation might harm their followers.

Additionally, some younger evangelicals tend toward adopting spiritual resources outside of the Christian tradition. Whether incorporating meditation techniques or yoga, my interviewees highlighted the ways in which they are exploring their religious and spiritual beliefs.

This contrasts with older evangelicals who perceive their tradition as providing all necessary resources for spiritual growth and reject any outside or Eastern influences. One interviewee noted that she had to change evangelical churches after her evangelical church prohibited her from being both a church member and a local yoga instructor.

Losing interest in the culture war

Many of the younger evangelicals in my study stated that their stances on culture war issues were significantly different from the evangelical majority of the past 50 years, which aligns with the findings of a 2017 Pew Research Center poll. This survey found that younger generations of millennials are more liberal than older evangelicals on numerous political issues.

My interviewees cited an acceptance and welcoming of those who identify as LGBTQ into their communities as both members and leaders. They support and ally with the objectives of the #BlackLivesMatter movement. In sum, they are actively dismantling many of the insider/outsider distinctions established by older white evangelicals and transforming what it means to be a politically engaged evangelical in America.

Furthermore, many of the people that I spoke with cited a culture war fatigue. Some believe that evangelicalism's multi-decade investment in campaigning for these conservative stances and alliance with the Republican Party actually harmed the evangelical tradition instead of empowering it, while others are simply trying to opt out of the culture war and focus on their faith instead.

Interviewees also told me that often their views are creating familial conflict, since their parents and grandparents cannot understand why any evangelical would not be committed to the older generations' conservative political causes.

Research to date, including my own, has yet to measure how widespread these shifts of attitude and belief among young white evangelicals may be. But there is other evidence of internal unraveling.

Take a recent announcement by Beth Moore, an influential evangelical speaker and author, that she has decided to leave the Southern Baptist Convention – the largest evangelical group in the U.S. – and end her relationship with a prominent evangelical publisher.

Or consider the recent departure of pastor Russell Moore, the former president of the Ethics and Religious Liberty Commission of the Southern Baptist Convention, who resigned from his position over the denomination's handling of racial issues. These developments indicate a growing internal struggle over who can legitimately claim authority for the evangelical tradition.

The last several decades of American politics have been dominated by culture war issues, with white evangelicals in positions of national power. But as my research is documenting, a political transformation seems to be underway. With younger, white evangelicals rethinking their alliances and continued participation in the culture wars, it is possible that conservative politicians may not be able to count on white evangelical support for much longer.

This could have broader implications for the American political landscape. Without evangelical support and influence, the issues that are often at center stage could drastically change.