11 actors who played their own relatives

From Tom Hanks to The Rock, several actors have portrayed one of their relatives (however distant) onscreen 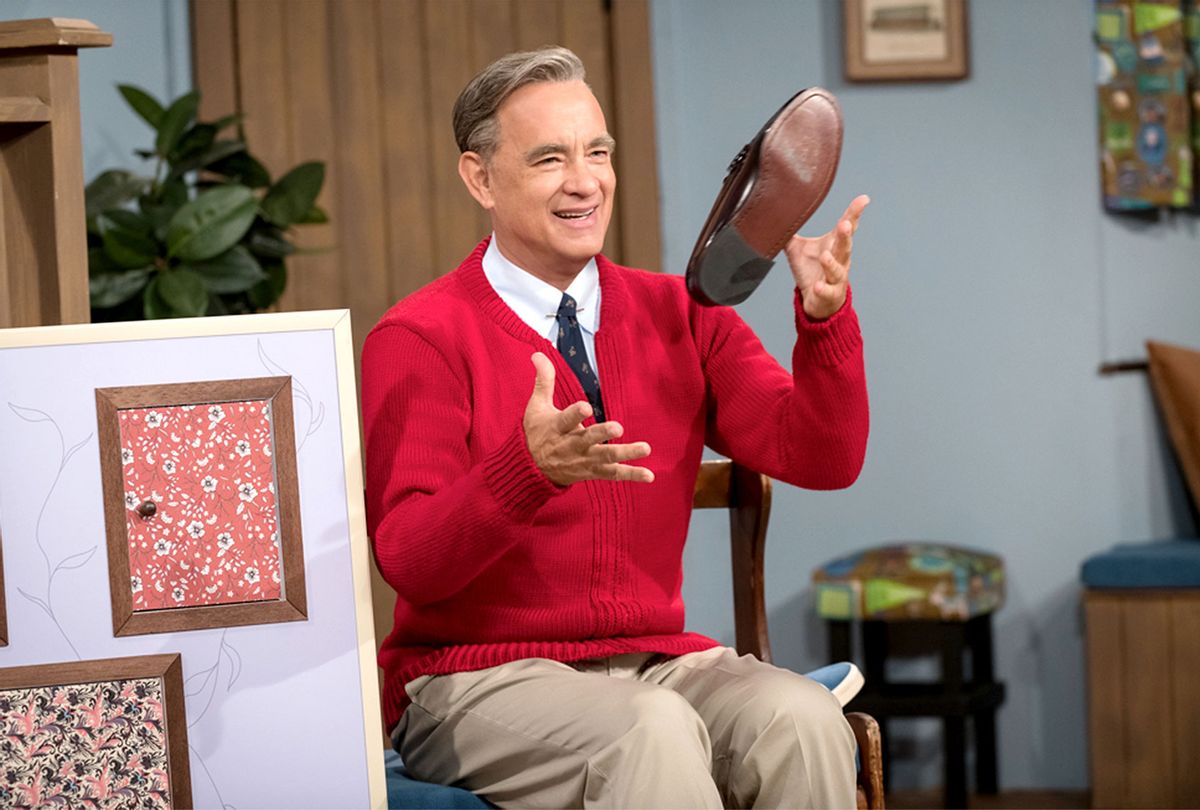 Tom Hanks in "A Beautiful Day in the Neighborhood" (Sony Pictures)
--

Actors sometimes go to great lengths to make sure their depictions of real-life people are accurate. Most famously, Robert De Niro got both very fit for 1980's "Raging Bull" and then put on weight to represent dual periods in the life of boxer Jake LaMotta.

Other times, actors only have to do some research into their family history. That's because several have portrayed one of their actual relatives onscreen. Take a look at some of the most notable examples.

Before professional wrestler Dwayne Johnson became a major box office attraction, he popped up on Fox's popular sitcom "That '70s Show" in 1999 playing his father, Rocky Johnson, a fan favorite wrestler in the 1970s. In the first-season episode "That Wrestling Show," family patriarch Red Forman (Kurtwood Smith) takes his son Eric (Topher Grace) to a local bout. If you don't count wrestling, it was Johnson's first scripted acting role.

O'Shea Jackson Jr., the son of rapper Ice Cube (real name: O'Shea Jackson), seemed to have a leg up in scoring the role of his father in 2015's N.W.A. biopic "Straight Outta Compton." But it apparently wasn't a foregone conclusion. Jackson Jr. spent two years going through an audition process before director F. Gary Gray cast him in the part. "I've been studying my role for over 20 years," Jackson Jr. told Entertainment Weekly in 2015. "I had his mannerisms and things like that down. It was really to get a bunch of the '80s lingo. And really where his head was at. We would talk every day. He would ask me, 'What scene are you doing today?' I'd explain it to him, then he'll sit back, reminisce, and be like, 'Oh yeah. That day, I was really trying to figure out what was going on with Eazy[-E], because I had just asked him about the contracts.'"

Ruth Wilson ("The Affair," "Luther") tackled a difficult part of her family history for 2019's miniseries Mrs. Wilson. She played her grandmother, Alison Wilson, whose husband Alec—Ruth's grandfather — was a serial polygamist, carrying on multiple marriages. The film was based on Alison's memoirs; Wilson has said that as the story grew within her family, it became important to take care of it. "Then me playing it, well . . . it felt like that was just the most obvious way to go, that I'd end up doing it through my grandmother's eyes," Wilson told Entertainment Weekly. "I felt the only way I could protect her was by playing her in some way."

Shia LaBeouf had a heavy hand in 2019's "Honey Boy." In addition to writing the screenplay, he portrayed a loosely fictionalized version of his father, Jeffrey, who LaBeouf has said he had an acrimonious relationship with as a child actor. In the film, LaBeouf plays James Lort, whose son Otis rises to stardom before struggling with substance issues later on. Noah Jupe and Lucas Hedges played Otis at different points in his life. LaBeouf said his father has seen the film, directed by Alma Har'el, and that it provided him with a new perspective on their relationship.

Melissa Rivers, daughter of legendary comedian Joan Rivers, agreed to portray her late mother for "Joy," a 2015 biopic about Miracle Mop inventor Joy Mangano that stars Jennifer Lawrence. (Mangano and Rivers crossed paths on the set of home-shopping channel QVC, where Rivers was a frequent presence.) "I worked with a dialect coach," Rivers told The Hollywood Reporter. "I didn't want to sound like her, but I knew I had to get the inflections right. Her speech pattern was so unique that I felt like it really needed to be in the spirit of her rather than trying to mimic . . .  [director David O. Russell] gave me so much confidence there on set that what potentially could've been a scary, sad, frightening experience turned into such an amazingly positive experience for me."

Geraldine Chaplin, the daughter of silent film star Charlie Chaplin, played her own grandmother, Hannah Chaplin, in the 1993 biopic "Chapli"n starring Robert Downey Jr. Meeting Downey in costume, she said, gave her the strange sensation she was encountering a younger version of her father. "He gave me this big hug," Chaplin told The Deseret News. "And he's this gorgeous looking young kid. I thought, how Freudian. Here I am in my father's arms. It was every girl's dream. Daddy as a young boy. Robert was shaking. I was shaking."

To tell the story of his pioneering father's Blaxploitation classic, 1971's "Sweet Sweetback's Baadasssss Song," Mario Van Peebles climbed into his dad's shoes. In 2004's Baadasssss!," Van Peebles plays Melvin Van Peebles, who encounters difficulties as an independent Black filmmaker. (The 1971 film originally received an X rating for its violence.) Mario, who also produced, co-wrote, and directed the film, didn't shy away from his father's uncompromising approach — and both men treated the project like the pros they are. When the younger Van Peebles needed clips from "Sweet Sweetback's Baadasssss Song," Melvin charged him $2,000.

Benedict Cumberbatch ("Sherlock," "Doctor Strange") took on the role of a distant relative when he played King Richard III in the 2016 BBC series "The Hollow Crown." Cumberbatch is Richard III's second cousin 16 times removed. In 2015, he attended Richard's reinternment. (Richard's bones had been found in a Leicester car park in 2012.) Curiously, Cumberbatch wasn't aware of the connection when he took the part.

"It was an extraordinary bit of serendipity, as I was literally dressed as Shakespeare's version of "Richard III" when I received an email from Leicester University saying that I was a not-altogether-ridiculously-distant descendant of Richard," he told The Radio Times in 2016. "I was asked to read the poem written for the occasion by Carol Ann Duffy at the reinternment in Leicester Cathedral. To have been present when Richard III found his resting place was moving; I was at the burial of a king."

In terms of onscreen familial commitment, few can equal Sophia Loren. The iconic Italian star played herself in the 1980 made-for-television biopic "Sophia: My Own Story." Not content there, she also tackled the role of her mother, Romilda Villani, in the same film. Loren later said her mother, who died in 1991, refused to see it. Loren even stepped into the role a second time, portraying Villani for a 2010 Italian miniseries about her life titled "La Mia Casa E Piena di Specchi" ("My House Is Full of Mirrors").

Strictly speaking, Rubén Amaro Jr. was a pro baseball player. But when he stepped into the acting field, he adopted the identity of his late father, Rubén Amaro Sr., on the ABC sitcom "The Goldbergs." Senior was a star for the Philadelphia Phillies, the home team of the fictional family on the Philadelphia-set series.

Call it serendipity or just a publicity gimmick—either way, it's still nice to hear. Days before the 2019 opening of "A Beautiful Day in the Neighborhood," Tom Hanks found out he's distantly related to beloved children's show host Fred Rogers, the subject of the biopic. The two share a great-great-great-great-great-grandfather, making them sixth cousins.