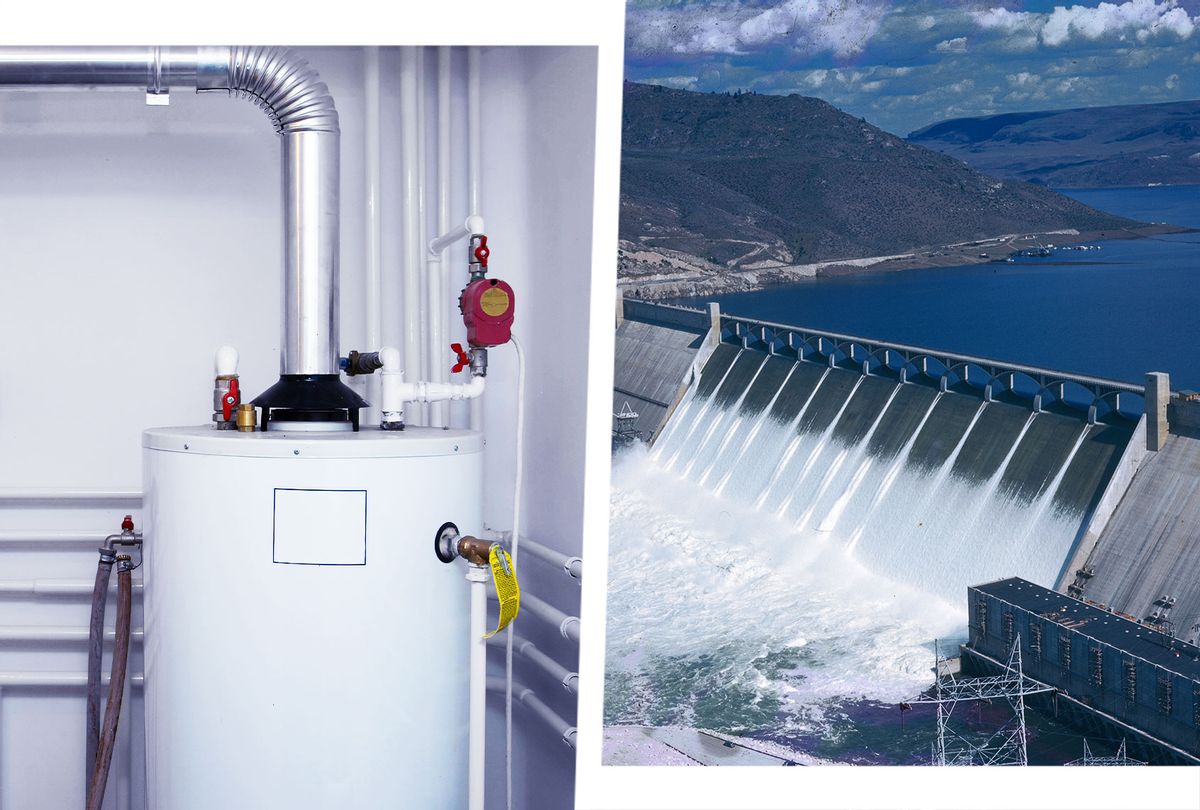 There's widespread agreement that in order to wean humanity off of climate-altering fossil fuels, we should switch over to renewable sources of electricity. Yet one of the biggest problems with renewables is logistical: unlike a gas power plant, you can't simply turn the flow of wind or solar energy on or off; those energy sources come and go as nature pleases.

As a result, the question of how to store surplus wind and solar power for when it's needed is more timely than ever. Unfortunately, many of the solutions being advanced only create new problems, and frequently cost more than necessary. And perhaps the best solution for energy savings — and one that would avoid having to build any new dams to facilitate energy storage — is sitting right under noses. Or, more accurately, it is sitting in our closets and basements.

One flashy idea for storing energy goes something like this: dam a river, use "free" surplus green power to pump that water up to another higher dam; then, when electricity is needed, release that water back down to the lower dam, spinning a generator along the way. The industry jargon for this set-up is "pumped-storage hydro". It is, in effect, a big, big battery.

At first blush, this sounds almost elegant: Use clean energy to store more clean energy. Even some environmental groups are getting seduced.

But there are several snakes in the garden. First, these dams are destructive: physically, ecologically, and culturally. Making matters worse, about a quarter of the energy is cannibalized to do all that pumping.

Adding insult to injury, immense amounts of precious water are lost by evaporation from the idling reservoirs. Climate change is making this worse. On the Arizona/Nevada border, water levels at Lake Mead — which is the downstream collection point for the Colorado basin — have fallen to less than a third of its capacity; hence, officials are looking at hydroelectric disruptions due to severe drought going into this summer and beyond. More water withdrawals, especially into enormous reservoirs that experience significant evaporation, accelerate the problem.

Ironically, this situation pushes the electric grid back toward costlier and dirtier gas-fired power plants. And these projects cost a fortune.

One high-profile proposal initially sought to dam the Little Colorado River upstream from its breathtaking confluence with the main Colorado, submerging a popular spot in the heart of Grand Canyon country.

About 30,000 people float "The Canyon" each year, and a few days into the trip many pause where these rivers meet to cool off and marvel at the layer cake of cinnabar cliffs sandwiched between azure sky and turquoise pools. I've had the good fortune to visit this hallowed place, twice, first with my father and later in life with my son. More importantly, this site has deep significance to the Hopi and Navajo peoples.

A "lower-impact" variant of the project, known as Big Canyon, was offered after the initial proposal met stiff resistance. It entails 4 miles of dam and other water-retention structures (9 reservoirs in all), 6 miles of water transport infrastructure, and two 14-mile-long high-voltage transmission lines to shunt the power gridward.

The project's estimated 3.6 billion watts is a pile of power. The National Hydroelectric Power Association predictably calls such projects "affordable." Yet, the results from past endeavors imply a price tag of $10 to $20 billion for Big Canyon. Even repurposing existing infrastructure, as has been proposed for the Hoover Dam, would cost many billions.

The technological enthusiasm underpinning this undertaking is reminiscent of a stubborn syndrome that existed until the 1970s, before OPEC woke the world up to the problems of energy dependency. In those days, energy planners reflexively gravitated towards huge, capital-intensive supply-side solutions, bypassing more elegant and dispersed "demand-side" options for instead proactively reducing the energy needed to get the job done.

A central pillar of the early energy efficiency movement of the 1970s was the idea of avoiding the construction of new electric power plants by instead deploying scores of efficient light bulbs, refrigerators, etc. One such project, dubbed "Merlin," sought to make a California power plant disappear by making the rest of the state more energy-efficient. And it cost a fraction of a new power plant.

Fast forward 50 years and we have succeeded. Energy use per unit of economic activity is down by more than half, compared to 1970s practices. Power plants were indeed cancelled.

And now, in service of the goal of decarbonizing the remaining energy required to meet our needs, we're producing lots and lots of renewable power to fill the remaining gap. We're even beginning to have a surplus, meaning that we sometimes generate more than can be instantly consumed. Hence the big dams.

Again today, there is a better way ... with a twist: trim and shift the demand for energy and target storage to where it's needed. It's Merlin 2.0.

Enter the humble water heater. Pulling about 5,000 watts of power, conventional electric water heaters use a lot of power. They are, in other words, a prime target for reforming the grid.

There is actually a little-known tradition, going back to the late 1930s, of electric companies managing water heaters to avoid short-squeezes on the grid during times of peak consumption. Because water can be kept hot so long, consumers don't even notice. Originally this was done with timers, later via radio signals, and today through the cloud. And, thanks to smart meters that track energy use by the minute, demand-shifts can be very precisely targeted and valued. Water heaters, reborn as big thermal batteries, are an excellent means by which lots of clean power can be strategically banked for later use. Hundreds of thousands of water heaters have already been quietly hooked up this way. This is just the tip of the potential iceberg.

Deploying one million more "flexible" water heaters in the United States would spare the Little Colorado. (Notably, around 10 million water heaters are purchased nationwide each year; one million water heaters is just 10 percent of that). The price tag would be a tiny fraction of that to build the disruptive Big Canyon hydro project, and also less costly than deploying enormous banks of batteries into the grid. Using far more efficient heat pump water heaters would still cost less (particularly the less-costly plug-in units coming to market this year, which avoid the need for electrical upgrades) and spread the benefits to four-times as many homes, displacing proportionately more carbon emissions and saving more people more money on their power bills.

As a thought experiment, were all U.S. homes converted to heat pump water heaters, reductions of 135 million metric tonnes of CO2 each year would be achieved (equivalent to that of about 30 million cars) and enough energy storage capacity would be available to avoid 20 Big Canyon projects.

This approach can be deployed far faster than dam construction, and free of protest (except perhaps from dam builders). It's also more resilient. During last winter's megastorms, the Big Canyon project would have provided no relief to those isolated in power networks such as the one that vexed Texas. And now this summer, we're reminded that heatwaves can boost demand beyond the grid's capacity even in less isolated power networks. The resulting grid congestion has already become an impediment to renewable energy development in many parts of the country. Water heaters are always local.

As we continue to decarbonize our energy systems, other flexible customer-side strategies can be supported using cash incentives for consumers who are willing to voluntarily flex their demand. Among these, usage can be shifted to times when the sun is shining and the wind is blowing via dynamic electric-vehicle charging, smart thermostats, and timed pool pumps, sending even more renewable electrons to homes while enhancing the power network's reliability.

It's the smart grid in action.

Evan Mills is an energy and climate analyst who participated in the work of the Nobel-Prize-winning Intergovernmental Panel on Climate Change. He is an Affiliate and retired Senior Scientist at the U.S. Department of Energy’s Lawrence Berkeley National Laboratory and a Research Affiliate at U.C. Berkeley’s Energy and Resources Group.