Do yourself a favor: Make some ciabatta rolls 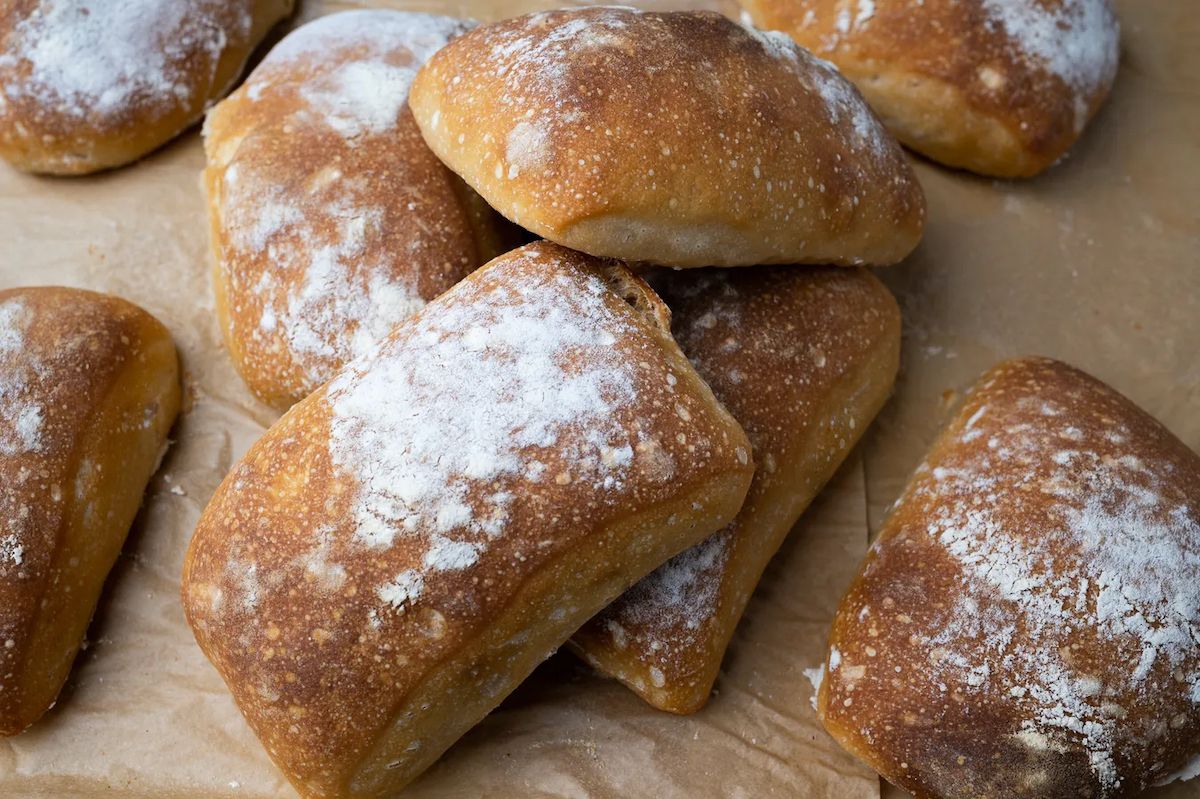 The Perfect Loaf is a column from software engineer turned bread expert (and Food52's Resident Bread Baker), Maurizio Leo. Maurizio is here to show us all things naturally leavened, enriched, yeast-risen, you name it — basically, every vehicle to slather on a lot of butter. Today, a guide to making sturdy ciabatta rolls, ideal for those summer tomato sandwiches.

Ciabatta is a relatively new style of bread, invented in Italy in the latter part of the 20th century (compared to, say, panettone, which dates back to the 1400s). Ciabatta is characterized by its crispy crust, open interior, and simple, elongated shape that some say resembles a slipper (literally "ciabatta" in Italian).

It's a workhorse bread in many bakeries and restaurants, commonly used for sandwiches of all varieties, and for good reason: It's the perfect shape when sliced in half, and has a sturdy structure to hang on to any fillings. For my home baker's adaptation, we divide the dough into smaller rolls, which I prefer to the longer loaf you might find in a bakery. Each roll is an excellent size for a hefty lunch sandwich. In addition, dividing the dough into smaller pieces makes it easier to handle and requires little in the way of special tools for proofing the dough free-form on a sheet pan.

Now that we know what it is and why we should make it, let's look at a few key points to making successful sourdough ciabatta in your home kitchen.

Commonly, ciabatta is leavened with instant yeast, usually mixed up as a biga. A biga is an Italian-style preferment typically left for around 12 hours to ripen, bringing additional flavor and textural benefits to the final dough. Instead, I took my usual approach and went the naturally leavened route, using 100% sourdough. Using sourdough for these ciabatta rolls brings added flavor complexity — a touch of sourness with slightly more assertive wheat flavors. In addition to the flavor benefits, I find this results in ciabatta with an even softer, more supple texture.

With any dough, adding a high percentage of water (to total flour weight) can be seen as a stressor to the dough system: The more water present, the more unstable it becomes. Therefore, to enable the dough to rise and still hold shape when baked, increased gluten development is required. This strengthening is developing the gluten present in the dough and occurs during mixing time and/or through sets of stretches and folds during bulk fermentation.

In the case of my ciabatta rolls, instead of going with heavy development up front in a mixer, I choose to go with more sets of stretches and folds during bulk fermentation. The sets happen in short 15-minute intervals at the beginning of bulk, then spaced out every 30 minutes toward the end, for a total of six sets. Usually, my hearth loaves call for two or maybe three sets, so this is a drastic increase. By the end of bulk fermentation and the called-for sets of stretches and folds, the dough will be smoother, more elastic (stronger), and better able to hold its shape when finally divided and proofed.

Why use high-protein flour for this dough?

For the primary flour in this recipe, I chose higher-protein bread flour, which has 12.5 to 13% versus the 11 to 12% protein content of all-purpose flour. In my experience, higher-protein flour tends to handle increased hydration and longer fermentation times more effectively, resulting in a dough that still bakes high in the oven, even when pushed to its hydration and fermentation limit. In my baking in general, I tend to limit my use of high-protein flour because it can lead to an overly tough or chewy result, but because ciabatta is classically a highly hydrated dough, the increased water content and longer fermentation time lead to a result that's just as soft and tender as a regular hearth loaf made with lower-protein flour.

If you don't have high-protein bread flour, all-purpose flour will also work in my recipe, just expect to decrease the dough's hydration by about 5% to ensure the dough isn't over-hydrated.

Cold bulk fermentation, also called pointage en bac in French, is a technique where the dough — all in one large mass — is placed into the refrigerator for some number of hours before dividing. There are several benefits to this nonstandard approach. The first is that the dough schedule can be broken up into two days, which can be convenient for home bakers. Second, with very wet dough, like this ciabatta, working with cold dough from the fridge is much easier because the dough is firmer and overall stronger than the same mixture at room temperature. When the dough is pulled from the refrigerator on day two, it's firm and easy to divide and transfer to its proofing area. Instead of having to handle a very wet, slack, and sloppy ciabatta dough, the cold dough from the fridge is taught, firm, and easy to handle.

Handle the dough gently for an open interior

An important part of making ciabatta — which can also be quite appealing to home bakers on lazy summer days — is the emphasis on minimal handling. To ensure your final ciabatta has an open and light interior, don't aggressively divide, stretch, or smash the dough when preparing it for proofing. In fact, this is one of those breads where the less you do, the better. Instead of handling the cut dough pieces with aggressive "pincher fingers," think of your hands more like flat paddles you use to slide under the dough and carry it from place to place. The less you pinch, the more open the ciabatta will be.