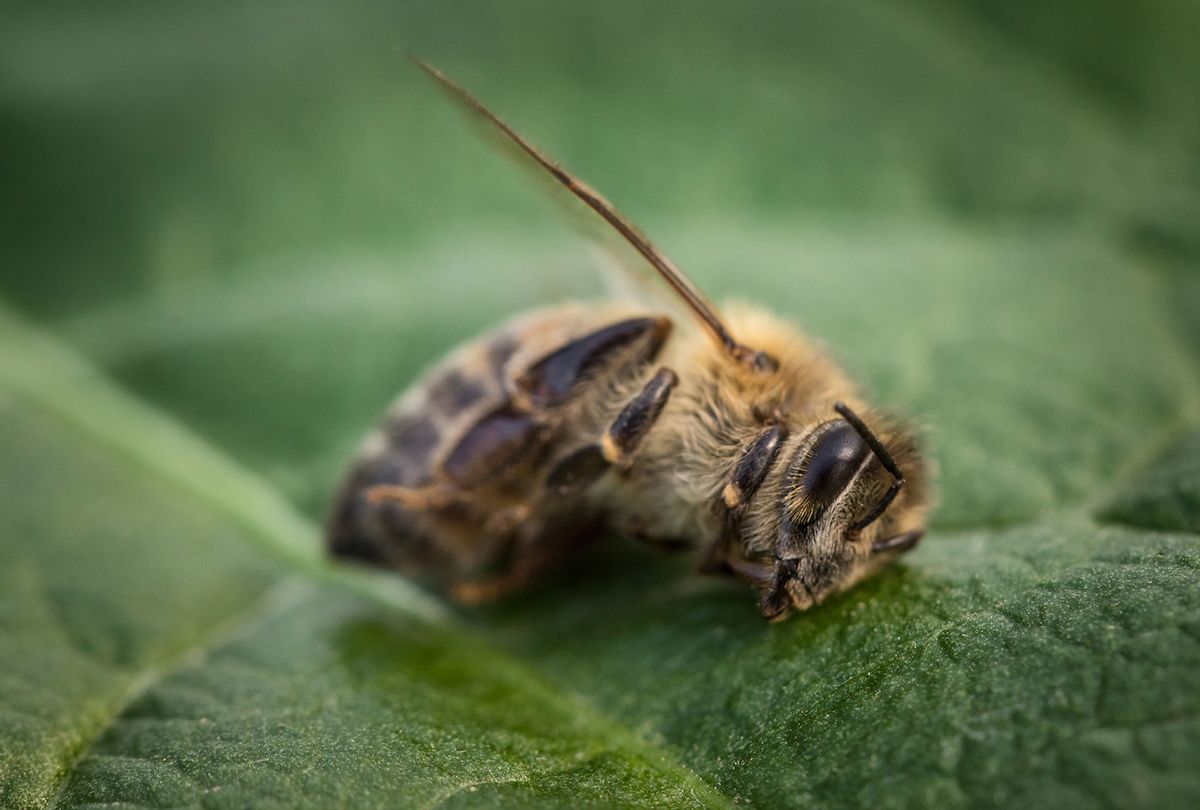 Macro image of a dead bee on a leaf (Getty Images)
--

For over a decade, he's been doggedly sounding the alarm on threats to bees and other pollinators, and proposing legislation to address those threats. On Wednesday, he introduced the Saving America's Pollinators Act for the third time (with some changes made along the way), with Jim McGovern (D-Massachusetts) as a co-sponsor and strong support from conservation groups including the Natural Resources Defense Council (NRDC), Friends of the Earth, and the Center for Biological Diversity.

In addition to establishing a Pollinator Protection Board explicitly free from pesticide industry representation, the bill would make sweeping changes to the commodity agriculture status quo by immediately canceling the registration of neonicotinoids until they undergo further review. These systemic insecticides, called neonics for short, are used to coat the vast majority of corn and soy seeds planted in the U.S. and farmers spray them on many fruit and vegetable crops.

Although Blumenauer admits the bill has little chance of advancing or becoming law, a lot has changed since he first shone a light on the issue in 2007. Neonics' devastating impacts on bees and other pollinators are now well-established, while more recent research is showing the chemicals can leach into soil and water and negatively affect aquatic animals, birds, mammals, and entire ecosystems. Policymakers in the European Union, Canada, and some U.S. states have also instituted various bans and restrictions on their use.

Still, the U.S. has allowed most farmers in most places to continue using neonics, and while evidence shows their use as treatments on commodity corn seeds may not ultimately benefit crops or farmers, it hasn't slowed down their use. And in places like Florida and California, citrus growers rely on them to battle pests.

The day before he introduced the bill, Blumenauer spoke with Civil Eats to discuss why he's convinced banning these pesticides is critical and what the path forward looks like.

You've introduced this bill a few times. What makes you want to keep bringing it back session after session?

Pollinators play a critical role in the food supply. Three quarters of the foods that make life interesting and healthy involve pollination. On a global scale, we're talking about upwards of $200 billion dollars a year, and we continue to see pollinator populations struggling. We lost an estimated one-third of honeybee colonies between 2016 and 2018. National honey crops have remained at record low levels, and the scientific evidence that we are creating this with nicotine-derived pesticides, neonicotinoids, [is increasing]. To be clear, it also exposes humans, especially farmworkers [to health risks].

Other parts of the world are moving: The E.U. has permanently banned the outdoor usage of several neonicotinoids, and we've got some [laws] in Oregon, in Portland and Eugene, and Maryland that have restricted the use. [California may also soon restrict use.] But the federal government has not. And in fact, Trump's EPA allowed bee-killing pesticides back on the market—and announced it was suspending data collection for its annual honeybee survey, which gives us the information to track the honeybee population.

So, as public awareness grows, the problem continues to be vexing, and it's getting worse and we're falling behind the rest of the world. We're trying to get the federal government back in the game. We're establishing a Pollinator Protection Board, which I think will be extraordinarily useful for monitoring. [The bill] is just a way for us to refocus on how pollinators and the food system are in crisis.

The proposed requirement that the Pollinator Protection Board not include pesticide industry representatives seems unprecedented. The industry obviously has a lot of power in D.C. and fights any regulation of neonicotinoids, and they're used to having a seat at the table. What kind of pushback do you expect?

Well, I don't think that they have a lot of credibility. I want to start with the people who really need to be there. The people who are dealing with keeping bees, farmers, conservationists, scientists. Those are the people who are most important to be a part of this process. If we end up having to add an industry representative, so be it. But there's not a strong position on their part in terms of trying to protect pollinators. It's business as usual, full speed ahead, and resisting reasonable approaches. So I didn't start with them.

The other thing that industry groups and the Farm Bureau argue whenever regulations on neonics are proposed is that they're a vital tool to protect crops. How do you respond to that argument?

We don't need to be involved with practices that actually jeopardize our food supplies. Putting pollinators at risk creates problems. We have a pretty good record—when we put our minds to it—on developing non-toxic alternatives, more approaches that are in keeping with natural predator control.

Instead, we get into a cycle where we use more chemical applications, become more dependent upon them, and have more and more negative consequences. I hope that we can break this cycle. I mean if it's killing pollinators, it's not good for farmers, farmworkers, or people who are in the vicinity of the applications of these products.

Have you been keeping up with the new science that extends beyond pollinators to other animals and human health?

Yes, I think the case is stronger and stronger, but it's also more and more disturbing. We want to try and get ahead of this curve. I have co-sponsored the bill with the head of the powerful Rules Committee; Representative Jim McGovern (D-Massachusetts) has been a champion here. And it's fascinating to me as we continue this work that more and more people are concerned about food systems. People are concerned about limiting chemical pesticide applications. We're kind of caught in a vicious cycle here and this is a way to try and break it.

And from a procedural standpoint, do you see a path forward for this legislation?

Well, I'm hopeful that increased awareness [will help], and frankly there's a different attitude with the Biden administration. They're much more interested in regenerative agriculture and providing environmental protections. David Scott, the new chair of the Ag Committee, is much more open-minded. I've had several great conversations with him about where he wants to take our agricultural policies, and he is much more open to new ideas than what we have had in the past.