12 surprising facts about Mel Brooks on his 95th birthday

Brooks is a 10,000-trick pony who has made us laugh as a performer, writer, musician, and, of course, a director 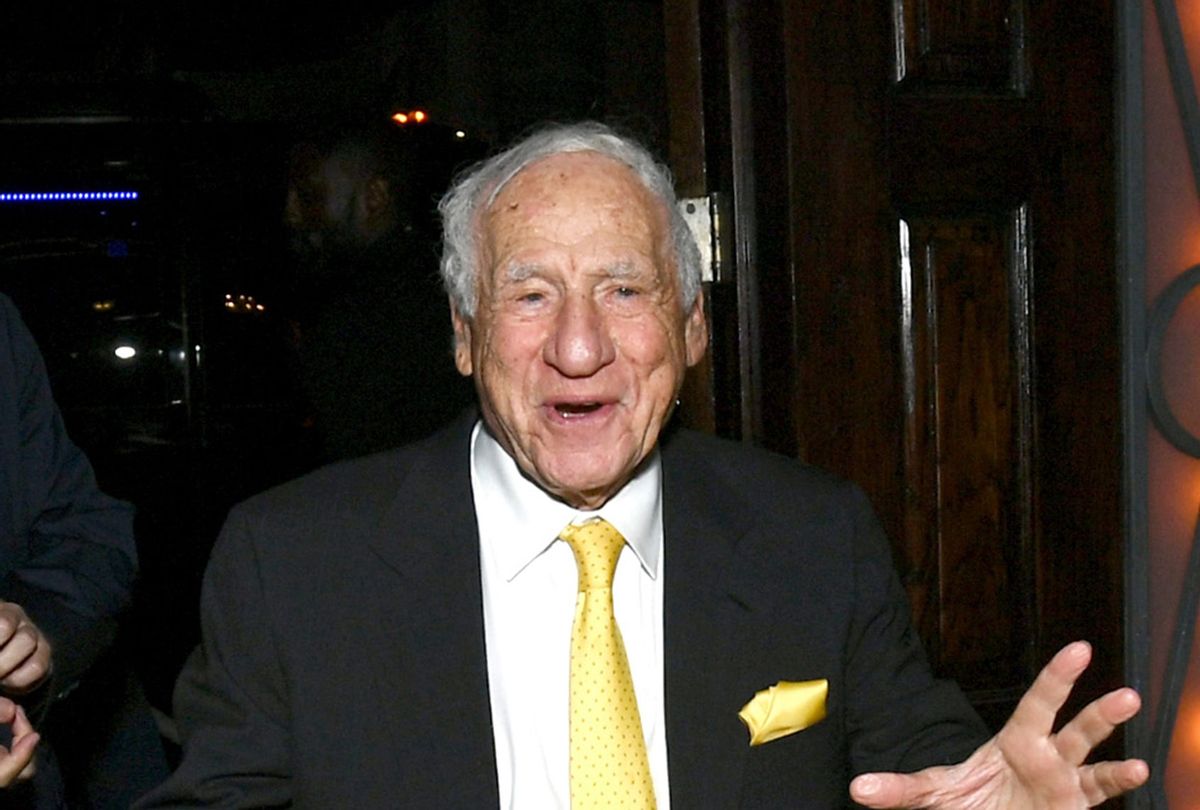 Mel Brooks, who was born in Brooklyn, New York on June 28, 1926, has been cracking people up since he was a teenager. Brooks is a 10,000-trick pony who has made us laugh as a performer, writer, musician, and, of course, a director. Through it all, the Oscar winner has found humor in places where most people wouldn't dare to look for it. We dug up a few things that you might not have known about one of the greatest comedic minds of our time.

1. Mel Brooks changed his last name because of a famous trumpeter.

Mel Brooks's given name is actually Melvin James Kaminsky. The son of Jewish immigrants, he grew up in Brooklyn, New York, along with three older brothers. At age 9, Brooks's uncle took him to see his very first Broadway musical: Cole Porter's Anything Goes. He was mesmerized. "I fell in love forever with Broadway," Brooks told The New York Times of the experience. Determined to make it in show business, the youngster started taking drum lessons from a neighbor. From there, Brooks's career really took off.

By his the time he turned 14 years old, Brooks was already earning money as a percussionist. Soon, his talents took him to the Catskills, where the teenager played for various clubs in the Borscht Belt. Back in the 1930s and '40s, this area was also the home turf of Max Kaminsky — an acclaimed trumpet player. To avoid confusion, the drummer started calling himself Mel Brooks, a nod to his mother's maiden name, Brookman.

Igor literally winks at the audience in "Young Frankenstein"; Darth Helmet fast-forwards through his own movie in "Spaceballs"; the camera shatters a windowpane in "High Anxiety." Just about every Mel Brooks picture is chock full of gags like these. The man's undying love for fourth wall jokes began in the Catskills. One of his first jobs there was doing maintenance work at the Butler Lodge, an Ellenville resort that put on the occasional play. Brooks got a big break (of sorts) when their production of the melodrama "Uncle Harry" ran into trouble.

Midway through the run, a supporting actor fell ill. Brooks agreed to take his place, but ended up flubbing his first scene. On stage, he was supposed to offer Harry a glass of water. But as Brooks poured, the cup slipped through his fingers and shattered into pieces. There was an awkward silence. Not knowing what to do, Brooks wandered down to the end of the stage, took off his character's wig, and shouted "I'm 14. I've never done this before!" The crowd howled with laughter. From that moment on, Brooks said, he knew he'd be a comic for the rest of his life — even though the director threatened to kill him.

The year 1944 was a pivotal one for Brooks. Upon graduating from high school, the future Oscar nominee (who still officially went by Melvin Kaminsky) joined the U.S. Army. After getting some training in Virginia and Oklahoma, he was sent off to Europe. As a member of the 1104th Engineer Combat Group, the Brooklynite saw action in the Battle of the Bulge. However, Brooks's unit spent most of its time away from the battlefield. Instead, a normal day's work for Brooks and his unit involved building bridges or poking around for buried landmines with their bayonets.

After the war, Brooks was hired as a writer for Sid Caesar's "Your Show of Shows" (1950-1954). He immediately hit it off with a co-worker named Carl Reiner, who would become a longtime friend and partner. One night, Reiner happened to catch a news show entitled "We The People Speak," a weekly program that dramatized current events with a team of actors and was hosted by Dan Seymour. Reiner thought this premise would make for a great skit on "Your Show of Shows," but Caesar vetoed the idea. Nevertheless, some good still came of it.

During a lull in the writer's room, Reiner put on his best Seymour impression, turned to Brooks and said "Here's a man who was actually seen at the crucifixion of Jesus Christ 2000 years ago." With a thick Yiddish accent, Brooks replied "Oooh, boy." Staying in character, Brooks went on to add, "Thin lad, wore sandals, long hair, walked around with 11 other guys." Thus, the 2000 Year Old Man was born.

Reiner and Brooks put together several popular albums' worth of interviews with this character, who supposedly danced with Marie Antoinette and fathered over 42,000 children ("Not one comes to visit me," he lamented). In 1998, the duo's fifth album, "The 2000 Year Old Man in the Year 2000," earned a Grammy.

The hit series "Get Smart," which was co-created by Brooks and Buck Henry, ran from 1965 to 1970. A spoof of the James Bond franchise, it starred Don Adams as Maxwell Smart, a U.S. secret agent whose enthusiasm didn't always match his competence. Before NBC picked it up, the show was pitched to ABC — whose executives wrote it off as "distasteful and un-American." Note, however, that it has since developed quite a following around the CIA.

In 1957, Brooks teamed up with celebrated lyricist Joe Darion to write the book for "Shinbone Alley." A twisted tale about a dead poet who has been reanimated as a cockroach, the musical flopped and only ran for 59 performances—although an animated movie version came out 14 years later (which you can watch part of above). Brooks took another stab at the Great White Way in 1962, when he scripted "All American." Though it garnered mixed reviews, it was modestly more successful and even earned two Tony nominations. By comparison, "The Producers" won 12 Tonys, setting a record that has yet to be broken (though "Hamilton" came close with its 11 wins).

By the late 1970s, Brooks had established himself as one of the top comedy directors in Hollywood, with genre parodies as his bread and butter. After lampooning westerns in "Blazing Saddles," horror movies in "Young Frankenstein," and Buster Keaton-esque cinema in "Silent Movie, "he chose the great Alfred Hitchcock as his next target.

Out of respect for the Master of Suspense, Brooks mailed him a rough story outline in advance with a note that read, "If any of this offends you, I won't do [the movie]." In response, Hitchcock invited Brooks to his office, where the two would meet on a regular basis to develop what became 1977's "High Anxiety." "Every Friday, I'd come over," Brooks said. "He was the most lovely, charming guy that ever lived." The day after Hitchcock saw the final cut, he congratulated Brooks with a case of choice wine. "I've still got three [bottles] left," the funnyman said in 2013.

In 1980, Anne Bancroft — Brooks's late wife — directed a dramedy called "Fatso." Her husband wanted to produce the picture, but knew that if his name showed up on the promotional materials, people would assume it was some kind of zany farce. So he created Brooksfilms, a company that would later produce such movies as David Lynch's "The Elephant Man" and David Cronenberg's "The Fly."

9. Mel Brooks writes a lot of the original songs that appear in his movies.

In the original, 1968 version of "The Producers," we get two musical numbers: "Prisoners of Love" and "Springtime for Hitler." Brooks came up with the melody and lyrics for both, though he had to ask a musicologist friend to convert these into actual sheet music. The director's other songwriting credits include the titular track of "Blazing Saddles" and "Hope for the Best, Expect the Worst" from his second movie, "The Twelve Chairs."

10. For "To Be or Not To Be," Mel Brooks and Anne Bancroft worked with a Polish language tutor.

Although he didn't direct it, Brooks regards "To Be or Not To Be" (1983) as his favorite of all the pictures he's ever done. A remake of Ernst Lubitsch's 1942 masterpiece of the same name, it stars Brooks and Bancroft as the Bronskis — a married couple who head a theater company in Nazi-occupied Warsaw. Early on, they take the stage for a Polish-language cover of the hit jazz song "Sweet Georgia Brown." To pull this off, the pair recruited a language tutor. "There's no greater joy than singing . . . with my wife in Polish," Brooks once declared. In a 2013 interview with SirusXM, Brooks reminisced about the film — and Bancroft. "She was fun," he says. "I liked her so much, I couldn't get enough of her."

11. Mel Brooks's left handprint on the Hollywood Walk of Fame has an extra digit.

On September 8, 2014, Brooks cemented his place in movie history — literally. As Hollywood looked on, the director left his foot and handprints on a new block of the Hollywood Walk of Fame. In typical Mel Brooks fashion, he did so with a prosthetic eleventh finger.

In showbiz, those that can pull off winning an Emmy, Grammy, Oscar, and Tony are known as "EGOTs." So far, only 16 individuals have earned the title. Brooks's journey toward becoming the eighth EGOT in world history began in 1967, when his work with Sid Caesar netted him an Outstanding Writing Emmy. Two years later, Brooks accepted a Best Original Screenplay Oscar for "The Producers." He then won three more Emmys en route to landing a Grammy with Carl Reiner for their aforementioned "2000 Year Old Man in the Year 2000" album in 1999. Finally, Brooks personally took home a trio of Tonys after "The Producers" musical was released.

As if all this weren't enough, he's also been a Kennedy Center honoree and, in 2010, Brooks received the Presidential Medal of Freedom. When he was given the latter, President Barack Obama delivered a memorable speech, noting: "By illuminating uncomfortable truths about racism and sexism and anti-Semitism, he's been called our jester, asking us to see ourselves as we really are, determined that we laugh ourselves sane."