"The only pandemic we have is among the unvaccinated," the president said Friday 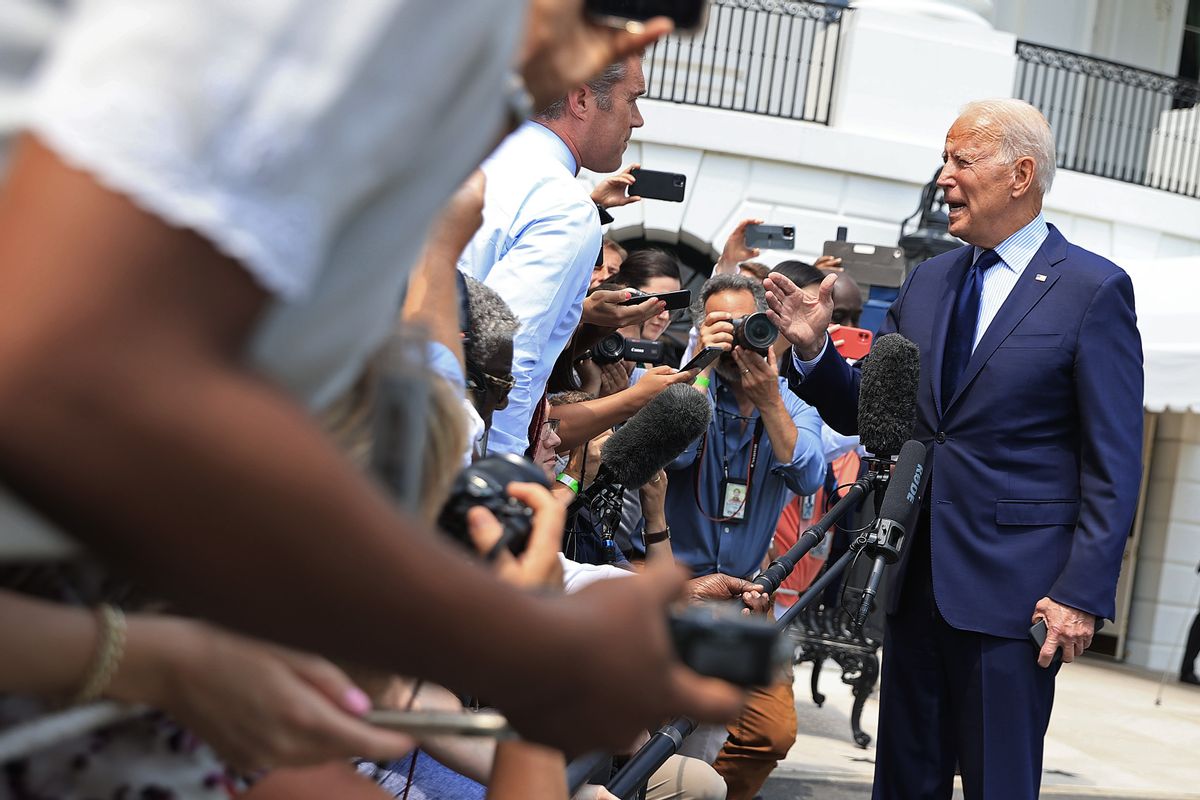 As the coronavirus pandemic surges in the U.S. again, a clearly frustrated President Joe Biden made a remarkable statement on Friday, accusing giant social media companies of "killing people" by allowing vaccine-related misinformation to proliferate on their platforms.

"They're killing people," he said of Big Tech, noting that: "The only pandemic we have is among the unvaccinated."

Biden's comments come amid a striking pressure campaign by the White House against Facebook, in particular, with Biden press secretary Jen Psaki telling reporters this week that the administration is in "regular touch" with social media platforms and actively flags "problematic posts" for Facebook higher-ups. During a press conference on Friday, Psaki even went so far as to suggest that platforms should coordinate with each other to enforce user bans across social media platforms. The White House press secretary pointed out several conspiracies the administration finds particularly concerning, including the false premise that COVID-19 vaccines can cause infertility.

"This is troubling, but a persistent narrative that we are seeing," she said. "We want to know that social media platforms are taking steps to address it."

The comments incensed right-wing media, which exploded Friday with claims both pointed and, at times, disingenuous. Take for instance, Fox News reporter Peter Doocy, who asked during Friday's press conference: "How long has the administration been spying on people's Facebook profiles looking for vaccine misinformation," seemingly suggesting that reading public figures' public posts amounted to "spying."

"This is how Communism starts," wrote freshman Rep. Marjorie Taylor Greene,  R-GA, in a falsehood-filled Facebook post that would later become the most-interacted-with vaccine post in Facebook's U.S. market, according to data available through the company's publicly available analytics tool, Crowdtangle. "The White House is working with Facebook to censor your post which is violating your free speech because people want to discuss (on FB) a NON-FDA approved vaccine that the Biden admin wants to force you to take."

"This is a lie," complained Fox News contributor Ben Domenech on Friday. "I want him to find one example, one person in this country who has died because of the misinformation." As a study by left-leaning media watchdog group Media Matters found, Fox News has "undermined vaccination efforts in nearly 60% of all vaccination segments in the last two weeks."

In a statement, Facebook reacted to Biden's call-out on Friday by touting the fact that "more than 3.3 million Americans have also used our vaccine finder tool to find out where and how to get a vaccine" to argue that "Facebook is helping save lives."

The controversy over Facebook's role in amplifying misinformation began in full earlier this week when the White House shared a blockbuster study from this past May, based on similar data compiled from Crowdtangle by the Center for Countering Digital Hate, which showed that just 12 accounts were responsible for 73% of the anti-vaccine content Americans interacted with on Facebook. The company disputed the report's methodology in a statement and highlighted its efforts to cut down on the spread of vaccine-related misinformation on its platform.

In fact, much of the Biden administration's frustration with Facebook appears to stem from the limits Crowdtangle presents — the same limits the company often touts when analyses show how the platform's algorithm privileges right-wing content: Crowdtangle only measures "interactions" on select posts (amounting to the number of "likes," comments and shares), but not the number of people the post itself has reached. In essence, the company is at least somewhat right — it is impossible to measure the full influence of a Facebook post, but only because the company does not share that data publicly.

In her comments Friday, Psaki also hit on this point, asking for greater "transparency" from social media companies, and calling on Facebook specifically to "measure and publicly share the impact of misinformation on their platform, as well as the audience it is reaching."

Yet recent reports suggest that Facebook executives are looking at shutting down Crowdtangle completely over the spate of bad press the division has generated over the last few years. The team of people working on Crowdtangle, which had been running semi-independently since being acquired by Facebook in 2016, was broken up in April and reassigned to the company's "integrity" division, according to a New York Times report this week. It was a development seen by some as a clear sign that the C-suite had soured on Crowdtangle's mission of transparency.

"People were enthusiastic about the transparency CrowdTangle provided until it became a problem and created press cycles Facebook didn't like," Brian Boland, a former Facebook vice president in charge of partnerships strategy and a longtime advocate for greater transparency, told the Times' Kevin Roose. "Then, the tone at the executive level changed."

Roose also noted that the company has experimented successfully with changes to its "News Feed" algorithm to cut down on the spread of election-related misinformation following the Jan. 6 Capitol insurrection, but reversed those changes after the company decided the threat of violence had passed.

It's unclear what the future holds for these tools, especially following this week's high-profile back-and-forth between Facebook and the White House. Boland, for his part, told the Times he wouldn't be surprised if the company killed off the division entirely, or slowly starved it of resources.

"Facebook would love full transparency if there was a guarantee of positive stories and outcomes," he said. "But when transparency creates uncomfortable moments, their reaction is often to shut down the transparency."