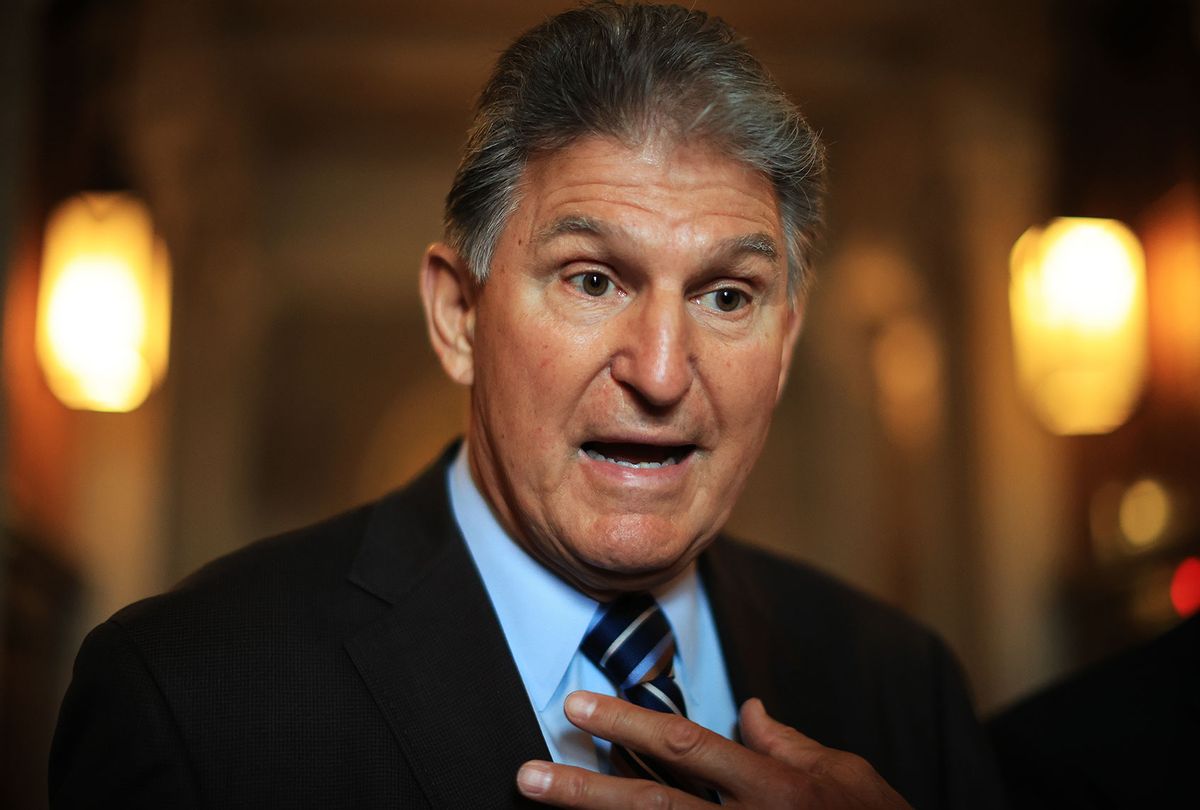 Sen. Joe Manchin on Wednesday night expressed concerns about the climate action proposed in the Democratic Party's $3.5 trillion reconciliation package. What the conservative Democrat didn't mention is that he profits—to the tune of hundreds of thousands of dollars annually—from selling coal to power plants in his home state of West Virginia.

Moments after President Joe Biden met with Senate Democrats to discuss the party's newly unveiled framework for infrastructure and social welfare spending, Manchin told CNN that he is "very, very disturbed" by the inclusion of climate provisions that he believes would spell the end for dirty energy extraction in the U.S.

Progressives "have the climate portion in here, and I'm concerned about that," said Manchin. "Because if they're eliminating fossils, and I'm finding out there's a lot of language in places they're eliminating fossils, which is very, very disturbing, because if you're sticking your head in the sand, and saying that fossil [fuel] has to be eliminated in America, and they want to get rid of it, and thinking that's going to clean up the global climate, it won't clean it up [at] all. If anything, it would be worse."

In response, investigative reporter Alex Kotch, who characterized Manchin's comments as "Fox News-level climate change denial," accused the lawmaker of "lying to us about climate change to protect his annual profits and the wealth of his family."

That was a reference to recent reporting in Sludge, which revealed that:

Manchin earns hundreds of thousands of dollars each year through coal sales to power plants that supply Edison Electric Institute member companies. His family company, Enersystems, is a contractor of American Bituminous Power Partners (AmBit), a coal power plant located near Grant Town, W.V. that provides energy to Monogahela Power Company, according to documents from the West Virginia Public Services Commission (PSC). Also known as Mon Power, the electric company is a subsidiary of energy giant FirstEnergy and an EEI member.

Manchin founded the coal brokerage Enersystems in 1988 and helped run the company, handing control to his son Joseph upon being elected West Virginia secretary of state in 2000 and reportedly moving his holdings into a blind trust between 2005 and 2010. In Manchin's most recent financial disclosure, covering the fiscal year 2020, he reports that his non-public shares of Enersystems, a "contract services and material provider for utility plants," are worth between $1 million and $5 million, and sent him an income of $492,000. His total income from the company since joining the Senate is more than $4.5 million.

While Manchin on Wednesday compared moving rapidly toward an energy system based entirely on renewables to "sticking your head in the sand" and even made the baseless claim that doing so could make global warming "worse," the International Energy Agency warned in May that averting the most catastrophic effects of the climate emergency depends on keeping fossil fuels in the ground and shutting down the world's existing oil, gas, and coal operations as quickly as possible.

The West Virginia Democrat is currently spearheading a bipartisan energy bill that would prevent the U.S. from doing its fair share to limit the rise in the average global temperature to 1.5°C above preindustrial levels. According to progressive critics, the Manchin-led Energy Infrastructure Act proposes spending 70 times more on dirty than clean energy and diverts attention from the need to immediately slash heat-trapping greenhouse gas emissions by promoting unproven carbon capture and storage technologies.

Given its razor-thin Senate majority, the Democratic caucus must convince Manchin and other conservative Democrats to back the reconciliation bill if it has any chance of passing with a simple-majority vote, a task likely to prove difficult.

In a recently leaked video, an ExxonMobil lobbyist identified Manchin and other so-called "moderates" as key to the fossil fuel corporation's strategy of undermining legislative efforts to reduce carbon pollution.

As the leaked Exxon exposé made clear, Manchin isn't the only federal lawmaker who poses a threat to decarbonization. According to Sludge, "Members of Congress had $93 million invested in fossil fuel industry stocks as of December 2019."

Rep. Jamaal Bowman (D-N.Y.), who on Thursday introduced the Green New Deal for Public Schools Act, issued a warning to those who remain opposed to addressing the climate crisis with the urgency that scientists and justice advocates have said is necessary, even as extreme weather-linked disasters are increasing in frequency, duration, and intensity.

"History will remember this moment," Bowman told the Washington Post.

"You have parts of the country that are reaching 118 degrees, parts of the country have never been that hot, recent storms on the East Coast, massive flood and destruction of property—I mean, climate change is here, and it's real," said Bowman. "I encourage my colleagues to be on the right side of history."

"This about their legacy, and all of our legacies," he added. "How do we respond to the climate crisis that's right in front of us? History will tell the story of who answered that question correctly."