Lifting the curtain on a long-neglected disease

In “The Kissing Bug,” Daisy Hernández blends memoir and science in describing the deadly toll of Chagas disease 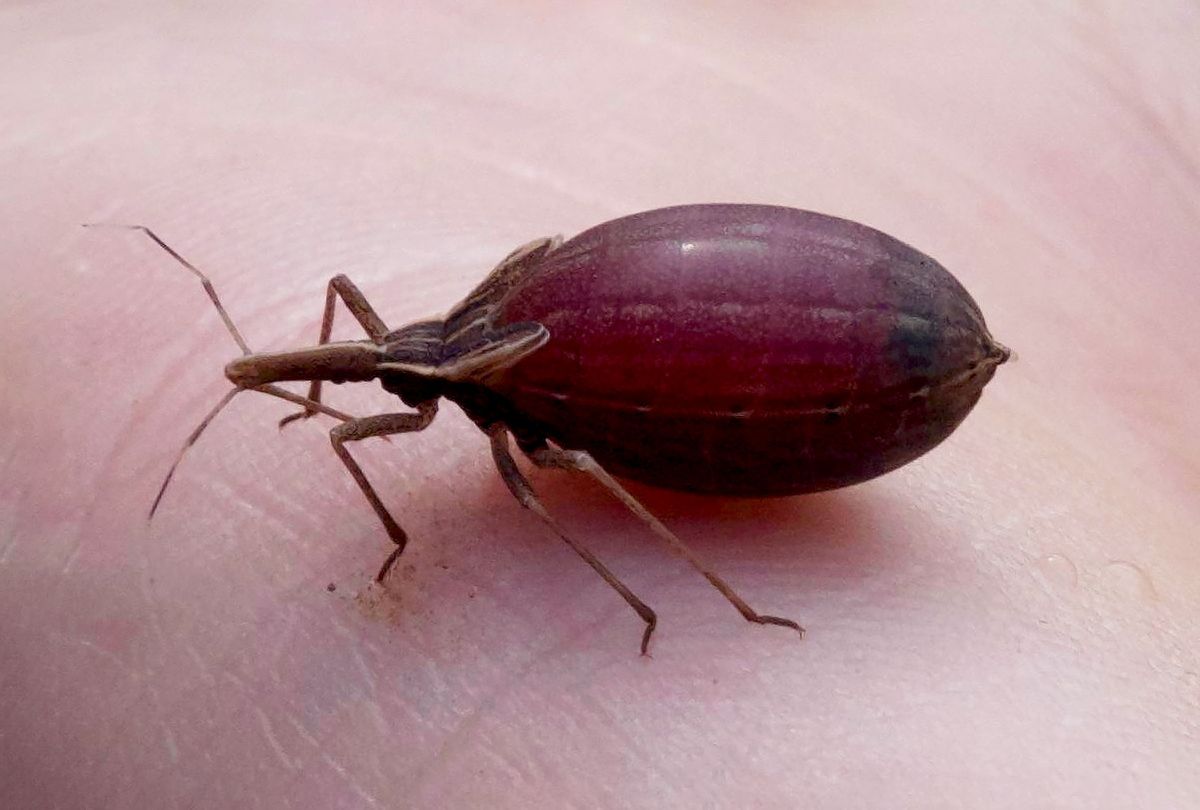 A 5th instar Rhodnius pallescens (Kissing Bug) sitting on a hand, engorged after consuming the blood of nearby fauna in Panama. (Photo courtesy of Jennifer K Peterson, PhD / jennipeterson.com)
--

In the 1940s, a promising Armenian-American researcher in Texas wanted to understand more about a parasite called Trypanosoma cruzi, which lives in a species of insects colloquially called kissing bugs. He knew that local kissing bugs transmitted the parasite to other mammals, but he wanted to know if humans could contract it, too. So, he stuffed a crushed kissing bug into the eye of a young Black man, who, according to the researcher's personal correspondence, may have been a psychiatric patient at Austin State Hospital. Sure enough, a few weeks later, the parasite, which can destroy the heart of its host, appeared in the man's blood.

T. cruzi and kissing bugs appear in human history far earlier than the horrifically racist medical experiments of the mid-20th century. T. cruzi has been found in mummies from 9,000 years ago. Charles Darwin may have had T. cruzi. Gilded Age-era American reporters christened the insects "kissing bugs" after an outbreak spurred dozens of news reports; a decade later, a Brazilian doctor isolated the parasite in a local toddler and gave the zoonotic disease its common name, Chagas. Since the 1980s, many of the millions of people living with Chagas in Latin America have immigrated to the United States. In "The Kissing Bug: The True Story of a Family, an Insect, and a Nation's Neglect of a Deadly Disease," reporter, memoirist, and professor Daisy Hernández chronicles the story of these people, and the racially fraught history of this disease, which is incurable unless it's caught early and treated with a rare drug.

This story is a personal one for Hernández. When she was a little girl growing up in New Jersey, one of her Colombian aunts, Tía Dora, traveled to the tri-state area to seek medical care for a mysterious disease that had swelled her stomach. In New York, Dora was diagnosed with Chagas, which is cousin to the sleeping sickness caused by the African tsetse fly. She spent the next decades fluctuating between health and sickness, in and out of the hospital, her esophagus collapsing. (Although the parasite usually targets the heart, it occasionally destroys other organs.) The disease eventually killed her.

There was plenty that Hernández's family didn't talk about when she was a girl: Another aunt claimed that Dora had fallen ill from eating an apple, and no one ever acknowledged the poverty and medical racism that exacerbated Dora's plight. As an adult, in the wake of her aunt's death, Hernández grappled with her grief by learning more about the disease. Her family was not alone in avoiding discussion of it: She writes that "even among the neglected, [Chagas] has long been ignored."

As part of her quest, Hernández travels to Bogotá to meet with a professor who's battling the insect and meets kissing bugs in jars in the university's insectario. She battles her fear of six-legged creatures and hunts for the bugs at dusk with researchers at Texas A&M University. In Iowa, she views T. cruzi through a microscope with a researcher who has samples of the parasite isolated from a person who lived in Chile in the 1940s.

Hernández also tracks down other Chagas sufferers, 300,000 of whom are thought to live in the United States. She meets Janet, a Hispanic woman in Maryland who had to have an emergency C-section during her second pregnancy and whose son nearly died from mysterious complications. Nobody knew what was wrong with him until they called family members in Latin America. Hernández meets a man who receives a heart transplant after the ravages of the parasite; an infected Los Angeles woman who has to have regular scans to monitor her heart wall; a Texas woman who contracted the disease from a local kissing bug.

Kissing bugs do live in the U.S., in a swath across the southern half of the country, but overall, cases of so-called homegrown Chagas are rare. The people who make up the bulk of Chagas cases in the United States are either immigrants from Latin America, who contract it there as children, or children of immigrants from Latin America, who inherit the parasite from their mothers.

This demographic truth contributes to Hernández's dawning realization that she was lied to as a girl when teachers told her that disease knows no racial or class boundaries. Disease itself is innocent of racism, of course, but our systems are guilty (as has been made abundantly clear since Covid-19 arrived on American shores) and these engrained prejudices shape which diseases and sick people receive attention and which do not. Chagas is confined to what Hernández calls "a second America," one whose maladies aren't taught in medical schools: 84 percent of OB-GYNs said "I don't know" when asked if expectant mothers could pass on the disease to babies. It is true that only 20 to 30 percent of people with Chagas become sick, and a much smaller percentage die, but, Hernández argues, even "one lost baby is impossible to bear."

Chagas patients also have to navigate the byzantine American health care system. Janet, the Maryland woman whose newborn fell ill with Chagas, had no health insurance and knew she would have to pay out of pocket for her own treatment for the disease. When Dora first arrived in New York, she relied on the kindness of a first-generation Jewish doctor who didn't report her for overstaying her visa. Then there's the cost of prescription drugs. In 2015, notorious "Pharma Bro" Martin Shkreli tried to hike the price of benznidazole, a drug used to fight Chagas, sparking a brief Twitter spat between him and Hernández.

The power of this book lies not just in Hernández's unflinching journalistic examination of the racism and classism embedded in the U.S. and international health care systems, but also in the blend of this examination with her complicated grief over Dora. This is no book about an angelic aunt snatched too soon: Dora stopped speaking to Hernández when Hernández came out as queer, and when Dora died, Hernández wondered why she was drowning in grief for someone who was so horrid to her. Her search for the kissing bugs is partly an extirpation and examination of that grief; she eventually concludes that she is mourning not her relationship with Dora, but how that relationship might have healed had Dora lived.

Hernández also brings a literary flair to her subject. Her mother is a "rag doll of a woman" and her dad a "jack-in-the-box," while a refrigerator is a "giant potato." This style unifies the journalistic and memoiristic aspects of the book while also serving to ground and enliven the scientific descriptions: For example, she writes that T. cruzi can shapeshift from "an eel with a Mohawk" to a "lavender coin" during its deadly hunt for cells.

Ultimately, the book is propulsive, fascinating, and tragic in equal parts, and in both style and substance it reminds us that the cold hard facts of medical science are never separate from humanity, or from our prejudices, or from our most intimate stories. "Pathogens don't care about bank accounts, national boundaries, or tax returns," writes Hernández, "and yet government policies about race, class, and citizenship determine who gets to see a doctor and who gets treatment — in the simplest and scariest terms, who gets to live or die." Put more simply and personally, "migration and poverty swallowed parts of the story."

Emily Cataneo is a writer and journalist from New England whose work has appeared in Slate, NPR, the Baffler, and Atlas Obscura, among other publications.