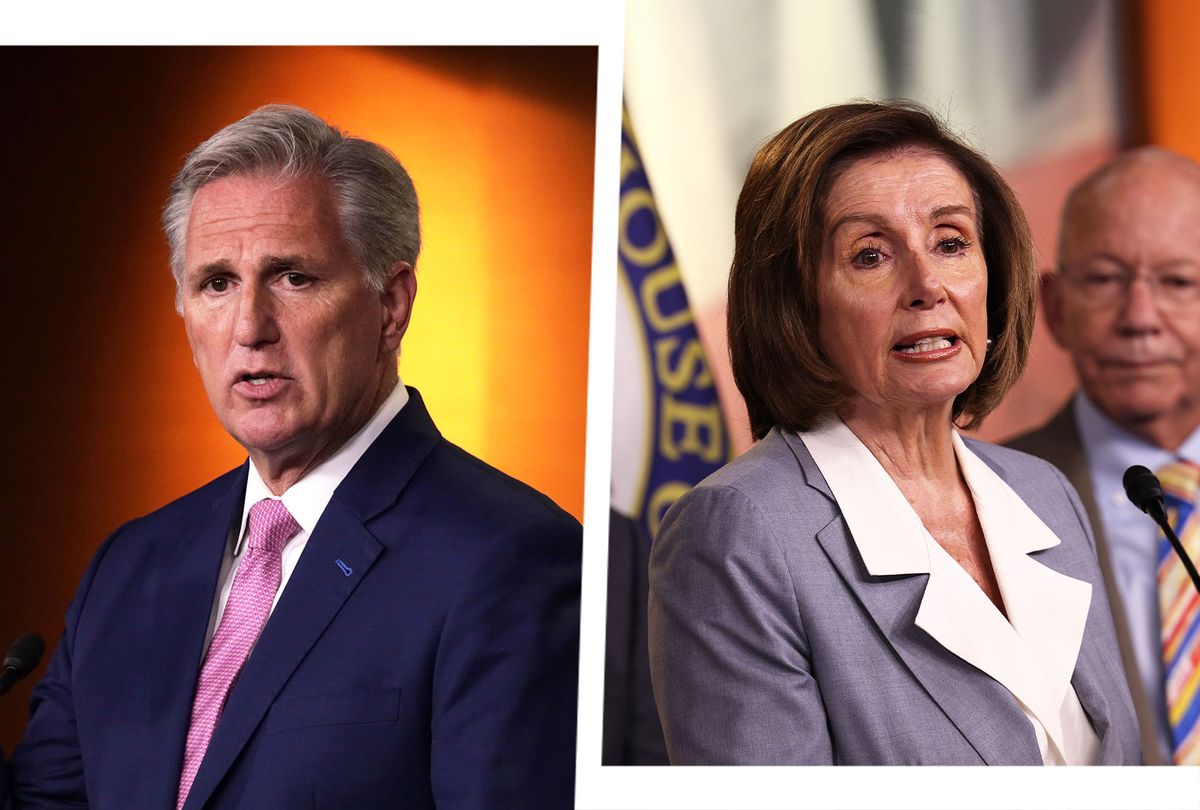 "We will run our own investigation," McCarthy said at a news conference, calling Pelosi a "lame duck speaker" and accusing her of an "egregious abuse of power" and of "destroying the institution."

The House voted mostly down party lines to create a special committee to investigate the Jan. 6 Capitol attack after Republicans refused to support the creation of an evenly split independent nonpartisan commission. The speaker, who appointed Republican Rep. Liz Cheney of Wyoming among her picks for the committee, said that McCarthy could choose up to five Republicans "in consultation" with her office. The Republican leader on Monday selected Reps. Jim Jordan, R-Ohio, Jim Banks, R-Ind., Rodney Davis, R-Ill., Kelly Armstrong, R-N.D., and Troy Nehls, R-Texas.

But Pelosi said in a statement on Wednesday that she would not allow Jordan and Banks, both of whom objected to certifying election results after the riot, to sit on the committee. She did allow, however, McCarthy to appoint Nehls, a freshman congressman who also objected to the results, and the other two Republicans.

"With respect for the integrity of the investigation, with an insistence on the truth and with concern about statements made and actions taken by these Members, I must reject the recommendations of Representatives Banks and Jordan to the Select Committee," Pelosi said, adding that she requested that McCarthy appointed two other members.

Pelosi previously said that how Republicans voted on the election certification would not factor into her decision but said in the statement that unspecified "objections" have been raised about Banks and Jordan.

Jordan, a fierce ally of former President Donald Trump who pushed false claims of election fraud, has long sought to derail Democratic-led investigations into Trump era scandals. Jordan has raised concerns among Democrats after alleging that the committee was all "about going after President Trump." Banks, the chairman of the conservative Republican Study Committee, has similarly raised alarm among House Democrats after issuing a statement on Monday decrying the committee he was appointed to as an attempt by Pelosi "solely to malign conservatives and to justify the Left's authoritarian agenda."

"I will not allow this committee to be turned into a forum for condemning millions of Americans because of their political beliefs," Banks vowed.

A senior Democratic aide told CNN that "members were outraged with Banks' statement on Monday night and his border trip that included [Republican] member photos with someone who was a participant in the insurrection," referring to Banks' recent border visit with Trump.

McCarthy first issued a statement threatening to pull all of the Republicans from the committee "unless Speaker Pelosi reverses course and seats all five Republican nominees."

"Denying the voices of members who have served in the military and law enforcement, as well as leaders of standing committees, has made it undeniable that this panel has lost all legitimacy and credibility and shows the Speaker is more interested in playing politics than seeking the truth," McCarthy said, adding that Republicans will not be party to their sham process and will instead pursue our own investigation of the facts." The Republican leader ultimately decided to have his party boycott the committee, according to the Associated Press.

"It is unprecedented. It has never happened before," Jordan told Politico after Pelosi's announcement. "We already know what this is: It is a partisan attack against President Trump."

Democratic leaders did not seem overly concerned about the lack of Republican participation.

Rep. Bennie Thompson, D-Miss., who will chair the committee, has said that the committee will have a quorum to conduct business regardless of whether Republicans participate in the process.

"We have a bipartisan quorum," Pelosi said after McCarthy's decision on Wednesday. "We can proceed."

The committee is scheduled to hold its first hearing next week with at least four police officers involved in the response to the riot.

Thompson, who also chairs the Homeland Security Committee, told The Guardian on Wednesday that the committee will "absolutely" investigate Trump's role in the riot. "Nothing is off limits," he said, adding that he is ready to issue subpoenas to numerous Trump administration officials if they refuse to voluntarily appear, including Trump's daughter Ivanka and former chief of staff Mark Meadows.

Thompson said the committee may also seek McCarthy's testimony after he reportedly pleaded with Trump to call off his supporters during the riot.