Strangers on a train: The dark bargain that destroyed the Republican Party

Old-line Republicans signed on to an unpleasant but temporary plan. Hitchcock's classic explains what happened next 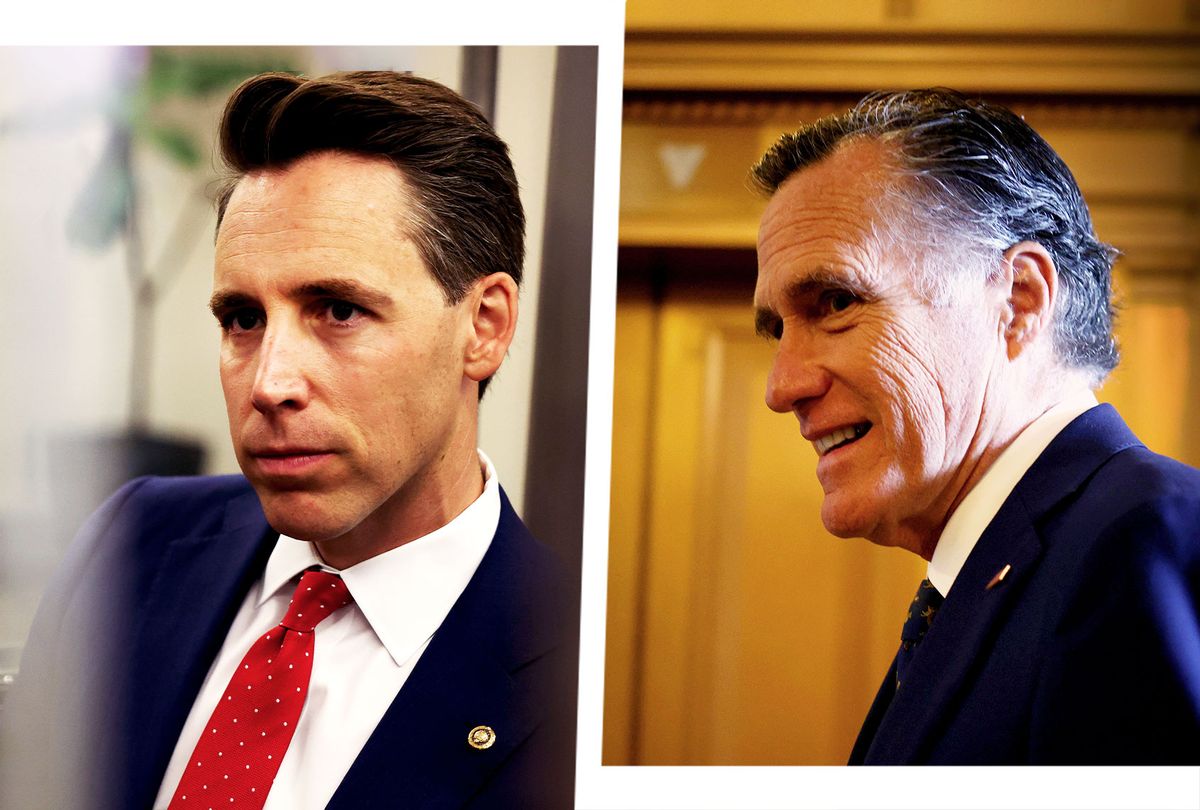 As the Republican Party continues on its march toward fascism, it's easy to find yourself making political connections — even when you are trying your best not to think about politics.

Recently I was reading about astrophysics (understanding only an infinitesimal amount) and saw the Republican Party's implosion into Trumpism as akin to the formation of a black hole in space, where truth (instead of light) is unable to escape the event horizon.

I found myself in the same frame of mind while watching Alfred Hitchcock's 1951 classic "Strangers on a Train," about a couple of men falling into a conversation and making an unholy bargain, which one of them thinks is a macabre intellectual exercise not to be taken seriously.

Falling back into the dream of the film, I could not help but see the conniving, unhinged Bruno Antony (brilliantly played by Robert Walker) as a precursor of  Mitch McConnell, Lindsey Graham, Ted Cruz, Josh Hawley, Ron Johnson and their ilk, those who have managed to kill off the old Republican Party and who are hard at work to murder majority-rule democracy — both through voter suppression and by inciting actual violence. For me, Guy Haines (played by Farley Granger) represented Republicans I understood, at least to a degree: Nelson Rockefeller, George H.W. Bush, John McCain, Mitt Romney, Liz Cheney. To me, those Republicans might have been willing to take advantage of others and perhaps stretch the law to avoid taxes or otherwise enrich themselves, but they would likely have ruminated over it and made sure to attend church service soon after banking the profits. In any case, they believed in the necessity of compromise, the work inherent in politics.

These are the so-called RINOs, or "Republicans in name only," a term which — now that I consider it — was always a form of gaslighting and projection. That term has been used to attack actual Republicans and make them seem like another group Trump voters could despise and blame for their failings and bad impulses — another "other." Newt Gingrich and his chortling crew sent the Republicans who understood that compromise was the way of politics (and who, it ought to be said, also took their oaths of office seriously) the way of the Oldsmobile. It was a Swift Boat operation done on their own people. We could all see they were Republicans, but we were told they were somehow not Republicans, or at least not real Republicans — they were RINOs. The fake Republicans pushed out the real ones.

And there it was: Gaslighting — the favored authoritarian manipulation of "don't believe what you see with your own eyes" — so named for the 1944 film "Gaslight" (directed by George Cukor with Hitchcockian flair), in which a criminal, played by Charles Boyer, purposively undermines the mental health of his wife (Ingrid Bergman, who won an Oscar for the role) by lying to her endlessly and saying that things she has seen with her own eyes are not true. You know, like Donald Trump has done to the public for years — indeed, for his entire adult life.

The overarching gaslighting that the modern Republican Party continues to perpetrate on the American public is that good old yarn about how lowering taxes for the wealthy and corporations will boost the economy — the so-called trickle-down theory, which George H.W. Bush memorably called "voodoo economics," before he was selected as Ronald Reagan's running mate, at least partly to shut him up. It always brings to mind something economist John Kenneth Galbraith wrote:

The modern conservative is not even especially modern. He is engaged, on the contrary, in one of man's oldest, best financed, most applauded, and, on the whole, least successful exercises in moral philosophy. That is the search for a superior moral justification for selfishness.

The actual Republicans — who we are told by the likes of Matt Gaetz are not the actual Republicans — must have thought back in the Tea Party days that the Gingrich plan, the treat-the-opposition-as-your-enemy, shut-down-the-government, win-at-all-costs faction, would be a temporary thing, something to be countenanced for a short time. They clearly felt the same way about the antics of Donald Trump. It was all just kind of an unsettling joke, as Guy Haines thought of Bruno's proposed bargain to trade murders.

In the film, Bruno crashes a party and nearly strangles a woman while re-enacting the murder he has committed, which might remind anyone old enough both of Gingrich's crashing the GOP with his "Contract With America"  (often referred to then as "Contract on America") and of the equally oddly named Grover Norquist, co-author of the "Contract," who often said he wanted a government small enough that he could drown it in the bathtub. (That phrasing seemed pretty personal — there's more than a hint of gruesome domestic violence in there.)

What Gingrich and Norquist brought to the party was the end of what used to be called "political comity" — seeing beyond different political positions and working together professionally to reach compromise. You know — pretty much the substance of politics.

There is a scene, both funny and unsettling, in "Strangers on a Train" in which Bruno and his mother (the memorable Marion Lorne, in her film debut) have a chance to catch up, and we learn a good deal about how Bruno became the person he is now. She fusses about his health and his attitude, remarking to her son that at least he had given up on his crazy earlier plan:

Mother:  Now, you haven't been doing anything foolish?

[Bruno shakes his head while nuzzling her hand.]

Mother:  Well, I do hope you've forgotten all about that silly little plan of yours.

Mother:  About, um, blowing up the White House.

Bruno:  Oh, ma, I was only fooling. Besides, what would the president say?

Mother [laughing with relief]:  Oh, you're a naughty boy, Bruno! Well, you can always make me laugh.

When the film was made, the politics of the day were focused on the Cold War and distrust of anyone who might be sympathetic to the "other side." Looking at the film today, who could doubt that Bruno, like far too many Republicans, might be a QAnon believer, as well as a delighted supporter of Trump's Big Lie about the election, shrugging off the lack of any evidence while pointing to Chinese and Russian conspiracy websites. (In the film, Bruno works assiduously to plant evidence to tie Granger to the murder that Bruno actually committed.) Bruno would have been delighted to help with the planning for the insurrection of Jan. 6 and would have cheered others on from a discreet distance. And he would just as cheerfully deny everything he'd done. You can never pin down a psychopath. As we all know now, it is not possible to hold the shameless to account. They just cry persecution.

The images of the fight on the merry-go-round — sent into overdrive by a policeman who shoots indiscriminately, killing the carny operating the ride — are unforgettable. Granger's character, like, say, Liz Cheney and Mitt Romney, is trying desperately to hang on as Bruno kicks at his hands and the whole contraption seems about to break apart. It does, at least until a carnival employee crawls beneath the carousel to reach the controls, too late to save the ride and some of its passengers.

One story concerning the making of "Strangers on a Train," as told by Ben Mankiewicz on Turner Classic Movies, is that Hitchcock was haunted by his decision to allow the man to crawl under the frantically spinning merry-go-round. For years afterward, Hitchcock said, he got sweaty palms every time he thought about that day. If Donald Trump is directing this insurrectionist flick now in production from Mar-a-Lago Studios, he's more than happy to sacrifice anyone and everyone.

The old GOP is going the way of that merry-go-round, and even if someone were to try to get to the controls now (Who? The Lincoln Project? The Bulwark?) it seems too late to save anything worthy of a democratic republic. Conservatives who are not pro-white supremacy, pro-conspiracy, anti-science, and chock-full of grievances will need to create a new political party someday — and get themselves out of the carnival business, with its glaring lights, mesmerizing sounds and untrustworthy machinery.