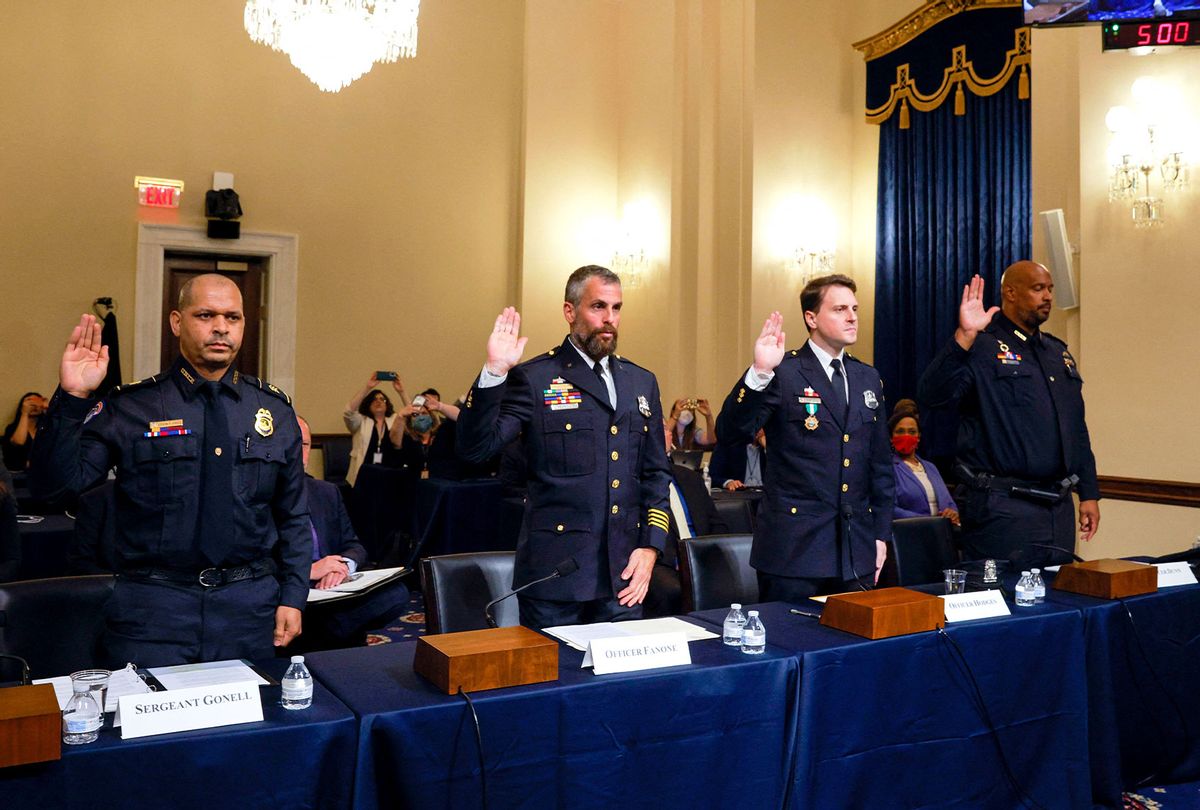 Four law enforcement officers who witnessed the violence firsthand at the U.S. Capitol on January 6 are again coming under attack — this time from right-wing media figures hoping to downplay the Donald Trump-inspired insurrection.

On Tuesday, the House Democratic-backed select committee held its first hearing on the January 6 Capitol riot.But rather than defending law enforcement – a natural posture for right-wing media when discussing state-sponsored violence – conservative pundits pounced on the officers, belittling their grievances and outright denying their accounts.

Newsmax host Greg Kelly has largely been at the helm of the online brigade, suggesting that the officers may have been "used" as "pawns" to push a left-wing agenda.

Referring to Capitol Officer Michael Fanone, who personally described his own assault by a horde of rioters, Kelly asked his Twitter followers: "Is it possible FANONE was mistaken for ANTIFA? He often, for media appearances, has worn all Black but no insignia, police patches, rank etc."

"Did they pick THESE cops because they're so Emotional?" Kelly followed up, latering asking: "Do these guys know who shot ASHLI BABBITT? Ask them!"

Kelly is likely referring to any number of baseless conspiracy theories about who killed Ashli Babbitt, a rioter who was shot and killed for attempting to breach the Chamber of the U.S. House of Representatives during the insurrection.

Raheem J. Kassam, the former editor-in-chief of Breitbart News London, also took aim at what he saw as the officers being overly emotional, despite them being nearly killed. "Is there really a Capitol Hill Police Officer crying about hurty words live on national television right now?" Kassam tweeted: "Fucking whole world is laughing at this shit."

Kurt Schlichter, a senior columnist for Townhall.com, called out Officer Harry Dunn, who during his testimony called it "disheartening and disappointing" to "live in a country with people … that attack you because of the color of your skin just to hurt you. Those words are weapons."

Other conservatives, meanwhile, fell back on downright conspiracy.

"Crisis actor Fanone just beat on the table and said it's 'disgraceful!' that any elected official denies his narrative of what happened on January 6," Kelly tweeted. "Calls it an 'insurrection.' Blasting GOP lawmakers. Now says this isn't about politics, lol. He has many tattoos."

Over 550 people have been arrested in connection with the Capitol riot, though thousands of Trump supporters had stormed the Capitol.